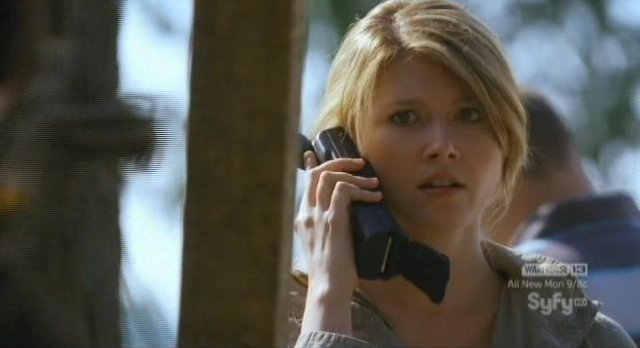 The film begins in space. Somewhere beyond our galaxy, some sort of massive object is rotating. We are drawn to Earth and Northern Bulgaria where we see an image of what is supposed to be the Black Sea, swallowed up by a huge crack in the ground.

Our anti-hero, Agent Garcia (Bruce Ramsay) barely escapes a second earthquake that continues the crack in the earth that almost appears to be chasing him until his vehicle hits a tree. 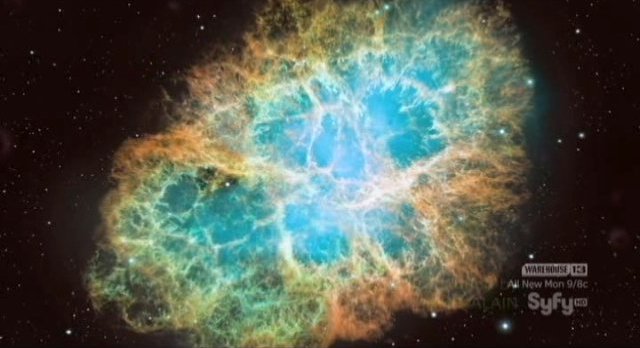 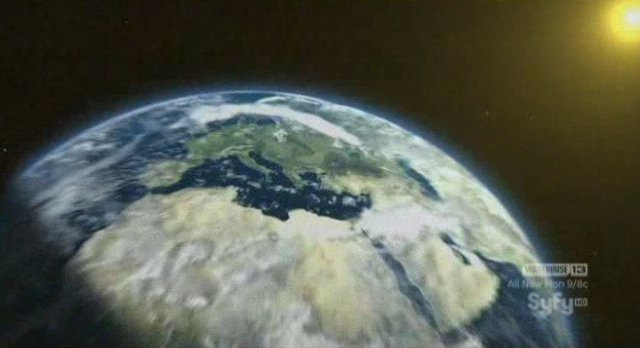 Segue to New York City where our hero, Eric Fox (A.J. Buckley), a proof reader for a major book publisher Sam Lovell (Jerry Wasserman) is sent after a manuscript written by a man who is supposed to be a modern day Nostradamus, Rupert Crane (Matthew Walker). 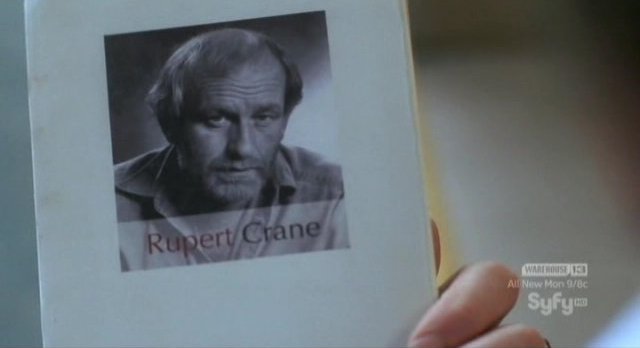 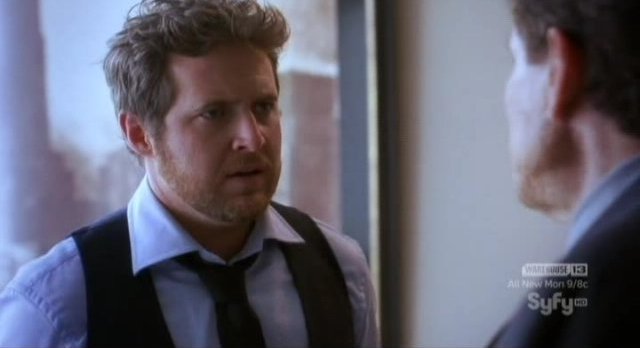 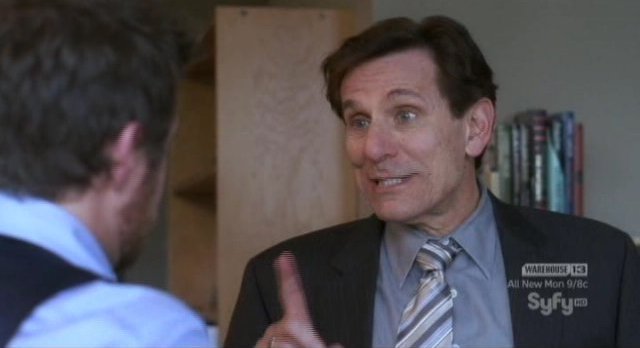 The modern day prophet has some connection to Eric Fox that Eric has no knowledge of. The drama increases as there are tremors in New York. We are briefly introduced to investigating scientist Dr. Yates (Hiro Kanagawa) looking into the phenomena. 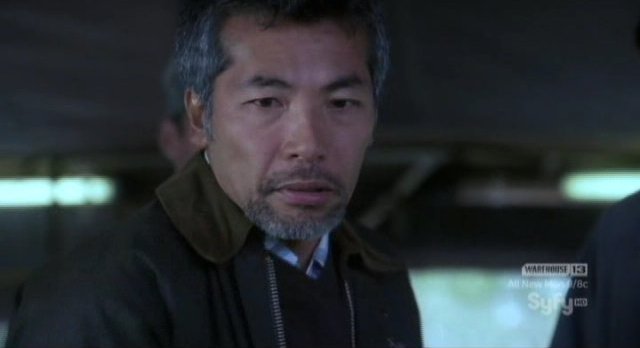 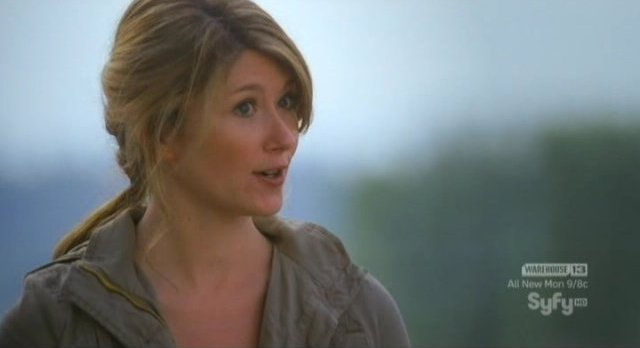 We meet Brooke Kelvin (Jewel Staite) who is studying an ancient shard with markings on it, when she receives a call from the author, Robert Crane. He knows everything she is doing. He tells her he needs to meet with her, that New York is next. Unfortunately for Crane, and the others, he is being monitored. 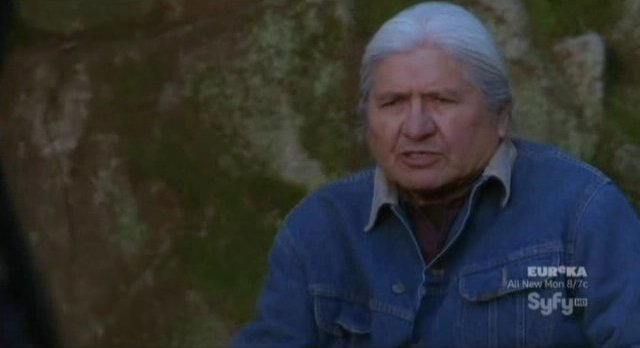 We are also introduced to John (Gordon Tootoosis – his last appearance before his demise), a Native Canadian living in British Columbia who has had a vision. He asks his Grand-daughter Raven (Roseanne Supernault), to fetch his rifle and some supplies. They are about to trek into the bush to a “sacred place”. The grand daughter is dubious. Eric arrives at a cafe where the server gives him an envelope with a hand written map. His boss, the publisher, calls to get an update, but as New York disappears, the publisher’s call abruptly ends. 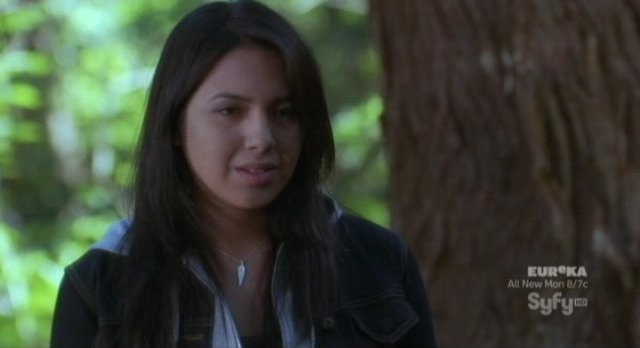 Enter Dr. Sparks (David Richmond-Peck), who explains to a group of military officers that every 26,000 years, the solar system’s equator aligns with the galactic equator. As the equators get closer together, the tectonic rumblings will get worse. 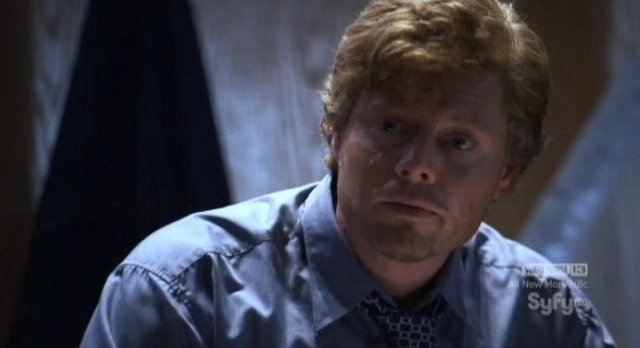 Brooke heads toward Rupert Crane’s last known location. Her conscience, Dennis (Matthew Kevin Anderson) her assistant, warns her to be careful. When she arrives at Crane’s home, Eric Fox is already there, and has discovered that Crane is dead. He has left clues in the form of a video and a sheathed rod. When Eric touches it, he has visions of the future. He discovers Brooke in his vision, as well as Garcia and Garcia’s people who are pursuing both of them. 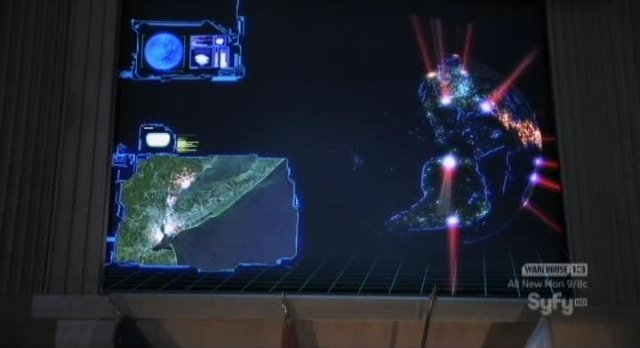 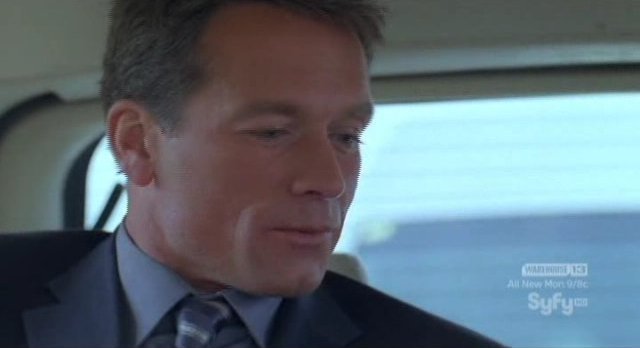 To escape, they head off into the woods together. Garcia orders Henning (Rick Ravanello) to go after them and bring them back alive for questioning. Hiding in the woods, Crane’s video image tells Brooke that she has to make a connection to the Moai Statues on Easter Island. Eric uses the rod to gain more insight into their situation. He sees an image and draws it on a pad of paper. Brooke takes a photo of the image and sends it via cell phone to her assistant. She tells him to research it with other cave drawings they have catalogued. 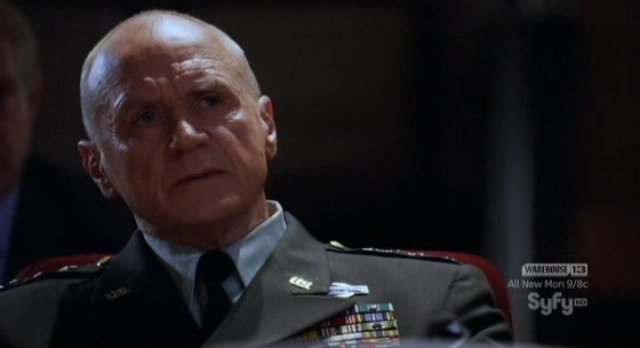 Enter the villain, General Slate (Alan Dale) who tells the higher ups that Brooke and Eric murdered Crane. He authorizes Henning to complete his mission with extreme prejudice, get the rod, and bring it back. Eric and Brooke arrive at the cafe that Eric had visited earlier to recharge the battery of the video camera they took from Crane’s home.

While there, a television broadcast informs everyone that Italy has been swallowed up, disappearing into the ocean. Henning arrives, just as an emergency broadcast warns everyone to evacuate their area due to a volcanic eruption. He begins shooting at them. They race to get out of the area and away from Henning.

Dr. Sparks is called in to continue to explain what is going on at another briefing. They have discovered an approaching massive dark star that will cause the entire surface of the earth to shift. Meanwhile, Brooke’s assistant comes through with information about an ancient Salish settlement just outside of a small town with cave drawings of what they are looking for. Dennis has written down all the details of where Brooke and Eric are headed.

Editors Note: In a local diner “The Hill Top Cafe” frequented several times in the film, we see a beautiful newscaster (Kate Gajdosik) giving a news broadcast informing her viewers of the ongoing disasters. Viewers may recall that Ms.  Gajdosik is well known for her newscaster movie and television roles since she actually works in the news industry at CTV Vancouver in real life! Kate has also worked on Stargate Atlantis in a support office crew position, and more recently appeared in “The Killing” and  Tron:Legacy. 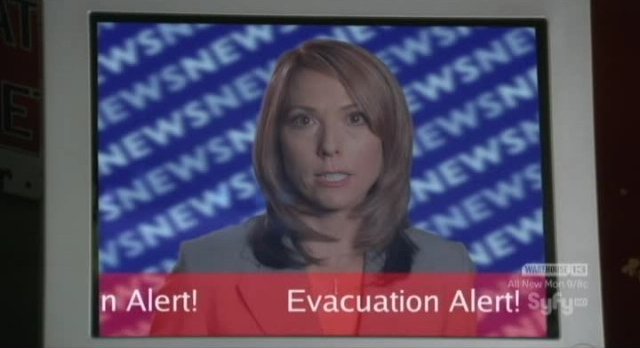 Eric accidentally leaves the information behind, which is found by the government agents on their trail. Now they know where Brooke and Eric are headed. Dennis phones Brooke to let her know that he is being chased by government agents as well, but his call begins breaking up. As he heads outside to get better reception, the ash cloud from the volcano catches up to him. Goodbye Dennis. I think Brooke and Eric are bad luck. 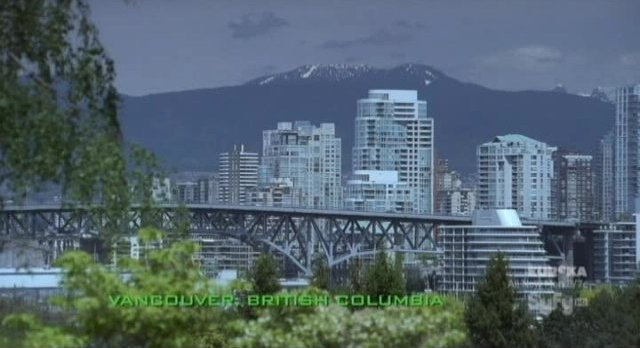 Segue to an awesome image of beautiful Vancouver, British Columbia as another earthquake occurs. Brooke and Eric stop at an abandoned forestry building and come across John’s daughter. She aims a rifle at them. When Brooke asks her what she is doing there, she answers, “waiting for you.” So, Eric isn’t the only one who is having visions. It turns out that John has something he wants to show them. Henning is still on their trail. He has found their vehicle. Despite orders from the General to wait, he heads into the bush after them. 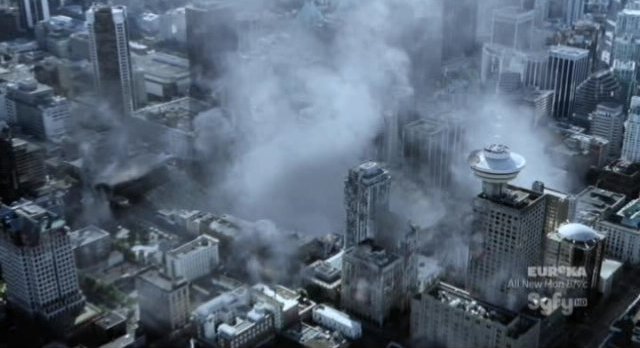 As Brooke and Eric begin to put the pieces together, Henning catches up to them. He says he’s just following orders. If they give him the rod, he will let them all go. Eric is about to hand over the rod. He tries to explain how important the rod is, but Henning isn’t listening. Naturally, Henning attempts a double cross. He prepares to kill Eric, saying, “Everybody’s gotta die sometime”. He gets shot by John, but Henning shoots John in return. Henning dies, which just goes to show, if you disobey orders in movies, your character gets killed off, unless you are the lead. John, on the other hand, is just winded since a medallion he is wearing stops the bullet and saves his life. John sends Eric and Brooke to complete their mission. 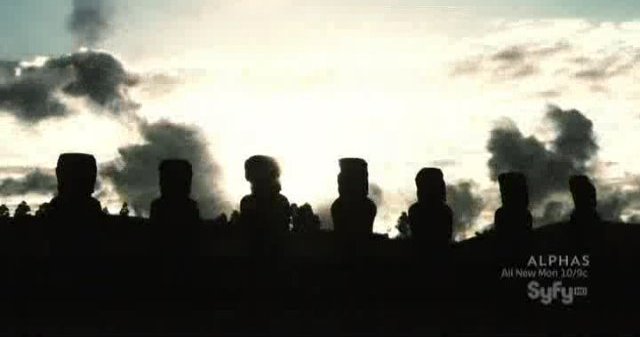 Eric again uses the rod to give him information to lead the way. Eric sees an image of several Moai heads in the middle of a field and a government agent who will help them. As they proceed, they come across the government agent. It’s Garcia. He tells them he has orders to retrieve a manuscript and bring them in. Eric tells him there is no manuscript. The world will end today, unless he helps them. Dr. Sparks is also with Garcia. Garcia calls the general who plays dumb. The General asks Garcia what he needs. We are not privy to the rest of the conversation, but, with the events that follow, it becomes obvious that Garcia must have given the general the coordinates of where they are.

Meanwhile, the general’s aid informs him that Washington is gone and the President is airborne. All executive orders will be given from Air Force One. He is ordered to go to Cheyenne Mountain. However, he has a side trip to make. Eric, Brooke, Sparks and Garcia arrive at the open field. Sparks has equipment with him that will give them images of where the Moai Statues are located underground. Once they have the six devices properly placed, they discover that the heads mirror Canis Major, a star constellation in the sky. 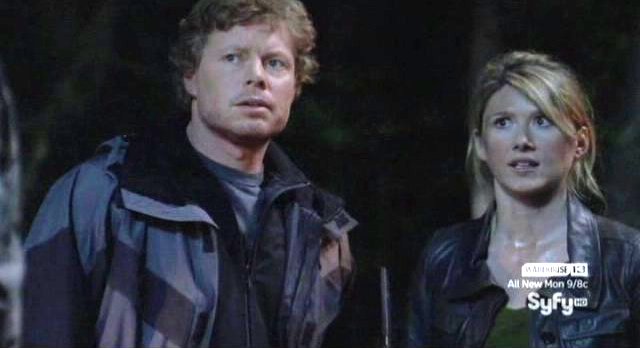 They begin digging. As they do so, they theorize that the rod may need to be placed in one of the statues to make it work. Just as they discover what they have to do, the general shows up. As the amount of time ticks down, the general tells them that the alignment has to run it’s course. Humanity survived it before and they will survive it again. 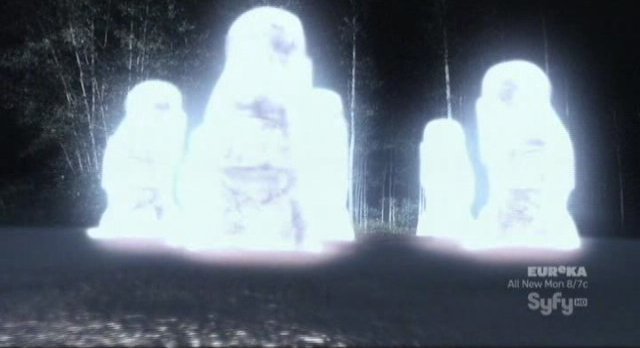 He will be in charge of the elite by using the rod to predict the future. Holding a gun on everyone, it looks as if the general will have his way. Garcia steps up to the plate. Go Garcia. He tells the general he can’t allow that. He gets shot for his trouble. The general grabs the rod, but as he touches it, he receives no visions. Eric grabs the rod and shoves it into the hole in the top of the Moai head. The general grabs for it, but a beam of light that comes out of the head zaps the general, vaporizing him. All of the heads rise out of the ground and begin glowing. Then the light from the heads bursts skyward and destroys the dark star.

The movie ends with a message of hope from the President through a radio broadcast. He recommends that the world come together and rebuild as we pan back. 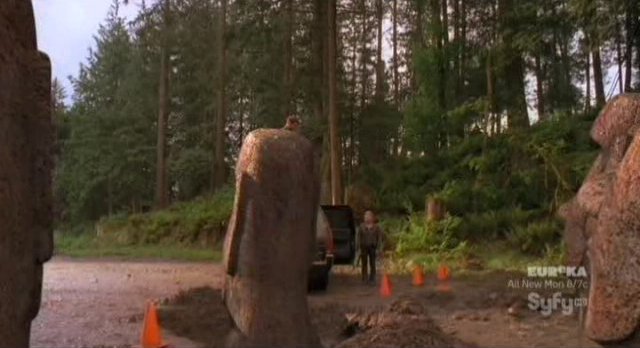 There are, of course, a few holes in the story. One that bothered me was that, they conveniently dug up the correct Moai Statue head that had the hole for the rod. With six heads in the vicinity, and with those kinds of odds, for them managing to find the right one right away, I think those people should buy lottery tickets! 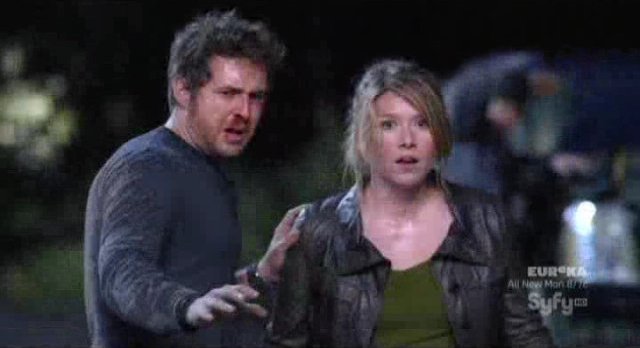 A remark on IMdB about the film that I must agree with is that, “in the beginning giant cracks have opened up beneath the Black Sea, and all the water has drained into them. There is a comment that they were able to dam the Bosporos Strait to stop the Mediterranean Sea from draining into the cracks. The smallest width of the Bosporus is a little over 3/8 of a mile (704 m). It would take months of continuous work to dam this Strait. But it is implied that this was done in a couple of days.”

Otherwise, the story was entertaining. Naturally, it required the suspension of disbelief that many science fiction stories require. And, for a change, I couldn’t tell my friends that Canada, my home country, was safe, since bad things in sci-fi only seemed to happen to America. The writers might consider adding a bit of humor to the story line in the future. I think that would have made a good story better.

Jewel Staite did a wonderful job as Brooke, but the best acting award, in my opinion, should go to Bruce Ramsay as Garcia, and Alan Dale as General Slate. Both actors showed great range in having to change their character’s direction. Garcia had to accept that, with little information, his boss, the general did not have the planet’s best interests in mind, and General Slate had to keep it together and act rational, even though he had ulterior motives. 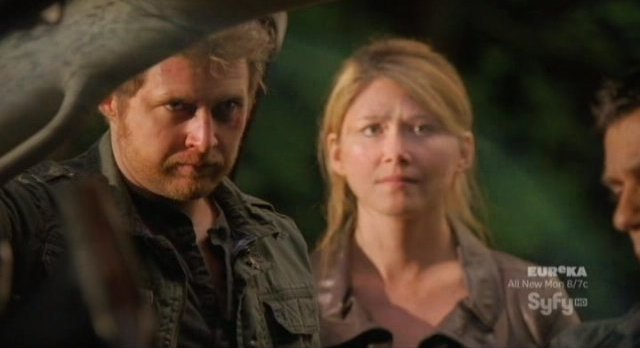