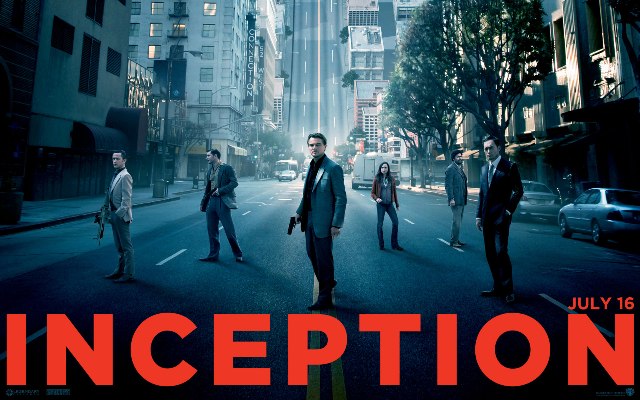 With so many other things taking my time and attention, I somehow managed to let several weeks go by without a visit to any of my local movie theatres. Shocking, right? I was definitely missing it–and worried that some of the things that I really wanted to see might soon be making way for new releases. So I made time to see five movies in ten days, starting with Inception.

Inception stars Leonardo DiCaprio with a fantastic ensemble cast including Ellen Page, Ken Watanabe, Joseph Gordon-Levitt, Marion Cotillard, Tom Hardy, Cillian Murphy, Tom Berenger, Michael Caine, and Dileep Rao.  It is a near-future sci-fi movie based on the idea that if someone could participate in your dreams and manipulate your dream experiences, you might give away secrets as you slept–basically a whole new way to engage in industrial espionage.

To be honest, based on the trailers for this movie, I did not expect to like it all that much. It looked like it might be another special-effects fest, with just enough story to string the effects together.  I am happy to report that I could not have been more wrong.

Inception is a really good movie. Yes, it has plenty of high quality special effects.  It also has action, drama and enough suspense to keep me on the edge of my seat for most of its 2 hours and 28 minutes.  It was kind of like watching a James Bond film without all the kitsch.  Because most of the action took place in a fictional dream state, the filmmakers could play around with reality.  But they (and by “they” I mean writer/director/producer Christopher Nolan) showed a lot of restraint.  This was much more a smart action film than it was a sci-fi special effects film.

All of the film’s reported $160 million budget can be seen on the screen.  Besides the stunning visual effects, the sound, editing, and the performances by every member of the cast–essentially everything that goes into making a quality motion picture–are first rate.

My recommendation? Definitely see this one, and try to catch it while it is still in the theatres because the big screen and big sound, while not absolutely essential, will make a difference.  If available in your area, try it in IMAX for that in-your-face experience.