This post, with updated an updated Music News Series theme, is provided per provisions of the Digital Millennium Copyright Act (DMCA) due to the author contributing this post, agreeing to same, and her failure, prior to publication, to request a written agreement with conditions to not maintain this publication per clearly published policies.

The failure of the author to properly adhere to not only the spirit of the DMCA, but the intent of the law regarding same, coupled with the contributing author’s filing a false DMCA claim are disappointing behaviors, however, such is not an unknown manifestation. 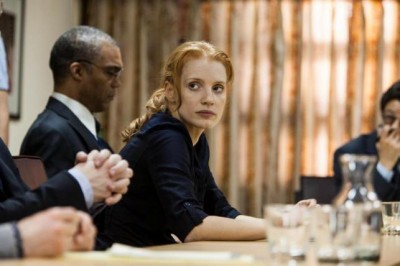 It is noted that the authors failure to meet all requirements of DMCA is a tragic manifestation often associated with those suffering from Obsessive Compulsive Disorder (OCD) and or other human behavioral challenges.

However, the good news is that the robust nature of DMCA is a testament to the rights of independent news organizations and Internet Service Providers everywhere who often have to demonstrate patience in dealing with people who have serious malcontent behavioral issues. We ask that you pray for all such misguided individuals. Thank you.

Lastly, as always, this “editors job” is to correct sloppy utilization of the English language often submitted by contributors in their draft articles. Specifically, the use of contractions, poor sentence structure, spelling errors, and the failure of said contributor to link images to the copyright owners as is required under the law was accomplished in this case to meet not only “Fair Use” requirements, but to ensure the proper use of the English language.

Nowadays, with Main Stream Media (MSM) owned by corporate interests and news reports dictated by spin and sensationalism, social media platforms such as Twitter as well as daring filmmakers fight to reveal the hard truth. Such is the case with ‘Zero Dark Thirty‘.

Zero Dark Thirty is not a documentary, but it may as well be. On Tuesday evening at the premiere on Capital Hill, director Kathryn Bigelow and screenwriter Mark Boal found themselves defending their film to Washington lawmakers.

It had reignited the debate regarding the use of enhanced interrogation techniques on detainees, in an effort to procure actionable intelligence. 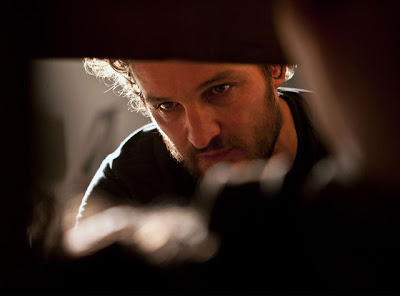 Following the premiere, a number of posts and articles were published that accused the filmmakers of advocating torture in their film. After seeing it on Wednesday January 09, 2013, I had to ask: “Were we watching the same movie?”

‘Zero Dark Thirty‘ began with a dark screen, as the audience is pulled back to September 11, 2001 with recorded audio of 911 calls. It is a moment of collective grieving as we hear the desperation of victims in the attack, and those reassuring them that help is on the way; to stay calm and hold on.

The film then moves to a graphic sequence where a terrorist with definitive ties to 9/11 is being interrogated by the CIA. Whenever he refuses to cooperate, they resort to torture.

Further along in the film, there are a few other scenes of interrogation and imprisonment. At one point the CIA analysts, while still in the Middle East, watch President Obama on TV as he reassures the American public that torture will not be condoned or used against detainees any longer. 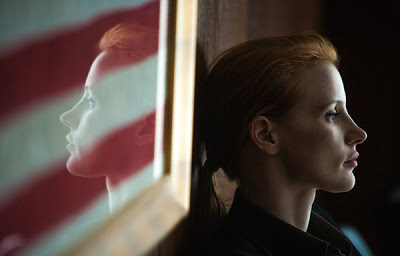 These particular scenes are not meant to advocate torture, in any shape or form. The filmmakers were simply illustrating the course of events in the decade following 9/11.

To not depict the progression of an administration that implemented such practices to one that sought to end it, would be ignoring an important chapter in our history.

Bigelow and Boal understood that after 9/11, our nation had become one raw, exposed nerve, and we would have agreed to anything (which we foolishly did) in the name of capturing Osama bin Laden. That is exactly why the opening of ‘Zero Dark Thirty’ is nothing short of brilliant. 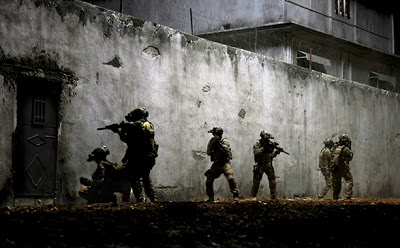 The partnership of Kathryn Bigelow and Mark Boal has been an extremely successful one. For those that are mindful that American cinema is still an industry dominated by men, there’s a deep appreciation for what Bigelow has been able to achieve.

Her thoughts on being a female director says it all: “If there’s specific resistance to women making movies, I just choose to ignore that as an obstacle for two reasons: I can’t change my gender, and I refuse to stop making movies. It’s irrelevant who or what directed a movie; the important thing is that you either respond to it or you don’t. There should be more women directing; I think there’s just not the awareness that it’s really possible. It is.” 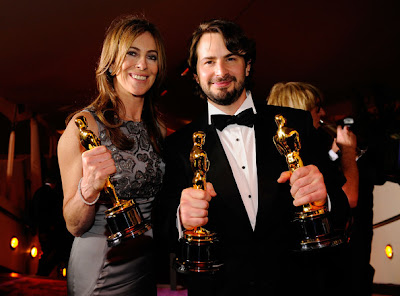 Kathryn Bigelow’s films include ‘Near Dark‘, ‘Point Break‘, ‘Strange Days‘ and ‘The Hurt Locker‘. Her ex-husband, James Cameron, wrote and produced ‘Strange Days’. Given their history, it was rather interesting when in 2010, they were both nominated for many of the same prestigious awards (he for ‘Avatar‘, and she for ‘The Hurt Locker’).

Bigelow went on to become the first woman to win the Critic’s Choice Award, a BAFTA (British Academy of Film and Television), the Director’s Guild Award and two Oscars. With ‘Zero Dark Thirty‘, she has won awards from film critics in Boston, New York, Washington D.C., and the National Board of Review. 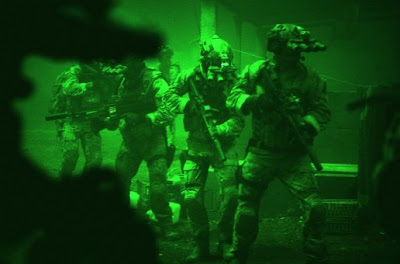 With their latest release openin 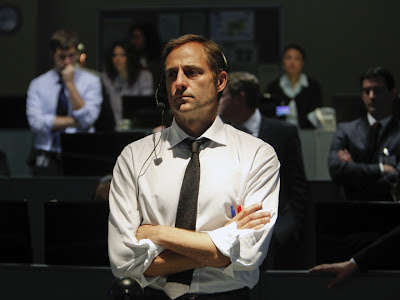 g widely in the U.S. Friday January 11, 2013, Kathryn Bigelow and Mark Boal can rest assured that their dedication and perseverance have paid off. The reviews by film critics and moviegoers have been largely enthusiastic, with some hailing it as the best film of the year.

This had been a long and arduous road for the filmmakers. Prior to SEAL team 6 locating Osama bin Laden, Bigelow and Boal had already started their project. Given the monumental historical development, they had to scrap their original script and Boal went to the task of quickly writing another one.

Alongside the challenges of production, the filmmakers were under intense scrutiny by certain members of Congress. As is often the case in the political vacuum of Capital Hill, accusations flew that the White House and the CIA had provided classified information to Boal and Bigelow.

Politicians pushed for an investigation, even saying so far that they wanted to stop the project already in progress. This became a witch hunt of sorts, with conservative members of Congress fearing that their party would be painted in a damaging light, and that the film would somehow aid in President Obama’s re-election. 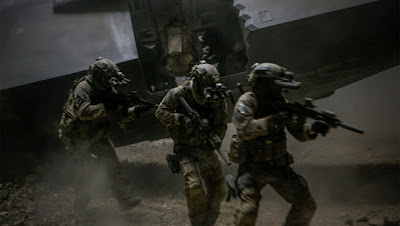 None of this came true, of course, but that has not stopped certain politicians from continuing their investigations. Having seen the movie for myself, there is nothing in it that justifies the feigned worry and concern over breach of national security. The film is not political in the slightest; as I mentioned earlier, it only depicts the chain of events after 9/11, leading up to the capture and killing of Osama bin Laden.

The movie is the result of painstaking effort in details (before becoming a screenwriter, Mark Boal had been an embedded journalist), and the narrative comes from firsthand accounts. 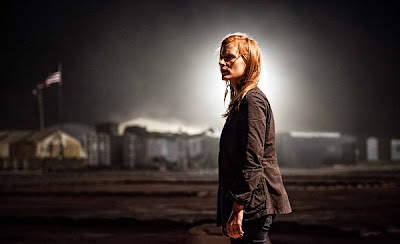 As for revealing anything pertinent to national security, the film chronicles events that were already covered by the media, at the time that they occurred.

With regards to the CIA targeting analyst (and her real-life counterpart) and her hunt for Osama bin Laden, of course there were details that were revealed.

But again, nothing that would warrant the knee-jerk reactions of particular politicians. And certainly nothing to justify the CIA’s action of denying her a promotion after everything that she achieved for them. 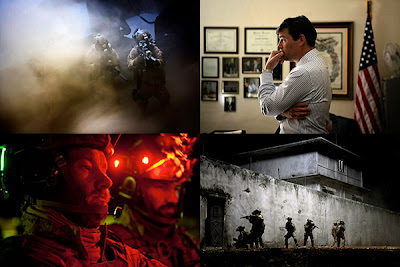 I highly recommend ‘Zero Dark Thirty’. It’s my hope that this film will provoke an examination into our identities as individuals, as a nation, and as a species. The political games that our countries play within themselves, and with each other have caused incalculable strife and suffering.

As a result of this, we’re threatened by serious blowback, sometimes even lending justification for retaliation. We must learn from our mistakes to prevent further tragedy: by ensuring that war is only fought when absolutely necessary, that politicians and our government are held accountable for their actions, and that as a country, we follow through on our words and promises to others.

At one time, WHR was honored to provide this review of Zero Dark Thirty here at WormholeRiders Movie Magic courtesy of Zoey who freely contributed same whom we used to respect and admire on Twitter until she violated DMCA.

In any event, come back soon for more insightful reviews by the world-wide Team at WormholeRiders!

Please feel free to share this review article with your friends, co-workers and or family by clicking one of the icons below. We would also appreciate your comments and look forward to you visiting in the future.

Or as many of our readers and visitors often do, visit WHR on Twitter, by clicking the text links or images avatars in this news story. I and Team WHR look forward to Seeing You on The Other Side! 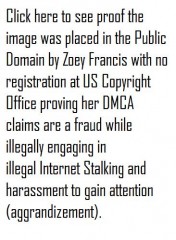 Comments (2) on “Zero Dark Thirty: The Controversy And Importance Of This Critically Acclaimed Film!”