The Neighbors: Dream Weavers, Support, Then Beat Those Kids Down!

Welcome back to our analysis about The Neighbors!

This episode is more a couples-centric event focusing on teen angst, adult frustration, and alien cluelessness. You have to love a show that has it all.

Guess who just joined the Twitter-Verse!

You can find him at @TemplemanSimon. Welcome to the lunacy, sir! 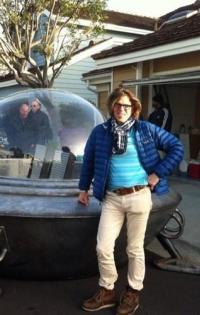 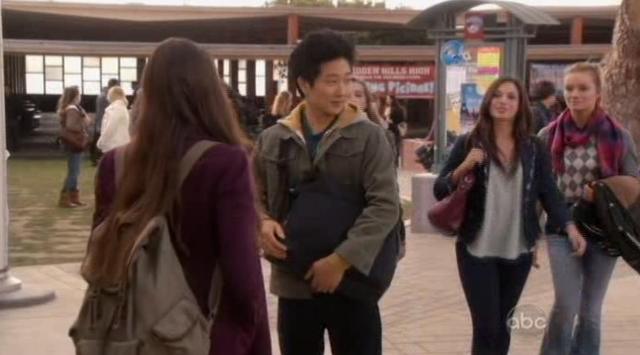 It seems that all the popular girls at school are pleased (jealous) that Amber Weaver(Clara Mamet) scored a date to the dance with Mr. School Jock.

The only person who does not know is Reggie Jackson(Tim Jo), who is doing his level best to gather enough courage to ask Amber to the dance. Poor Reggie, he finds out soon enough that Amber is already on cloud nine about the Jock. 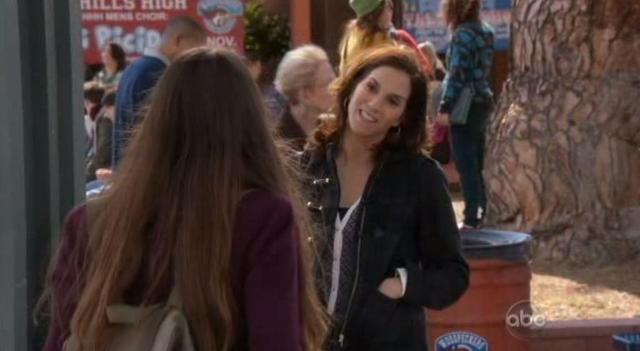 Moments later, Amber spots her mother, Debbie Weaver (Jami Gertz) on school grounds. The conversation begins with, “Why are you here? Grandmother better be dead”. Debbie’s reply, “Grandma is fine, sadly.” I am having a tough time liking Amber in this episode. She is more miserable than ever. I know that not all teenagers are like this, so why does Amber have to be? 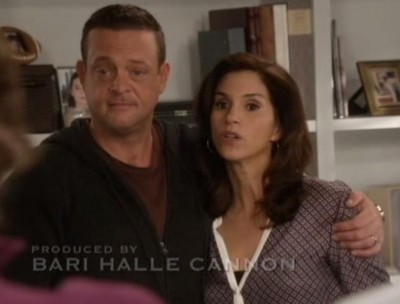 Debbie tells Amber that she and Marty are signing up to be chaperones at the dance despite Amber’s  desire for them not to. However, Debbie agrees to three guidelines which Amber quickly lists, “no standing near me, no looking at me, no dancing…period, including the Weaver Running Man”; whatever that is.

To cap things off, Amber threatens that if Debbie and Marty break the rules, she will make out with Jeremy in front of them. This is why I do not like Amber. This behaviour is disrespectful of her parents in the extreme.

At home, where Marty (Lenny Venito) is not working, again (doesn’t Marty ever work) Debbie is explaining the high school dance to Larry Bird, Jackie Joyner-Kersey (Toks Olagundoye), and Reggie. That leads to the aliens explaining how they get together. They are so in tune with the Universal Truth, that they do not get it wrong.

“We are pulled to our feet by an intractable force and the same thing is happening to our mate, wherever they may be”, begins Larry. “…and we are pulled by this force to a nearby holy space, what you call a love field…” Marty quickly corrects Jackie, “We don’t call anything a love field”. 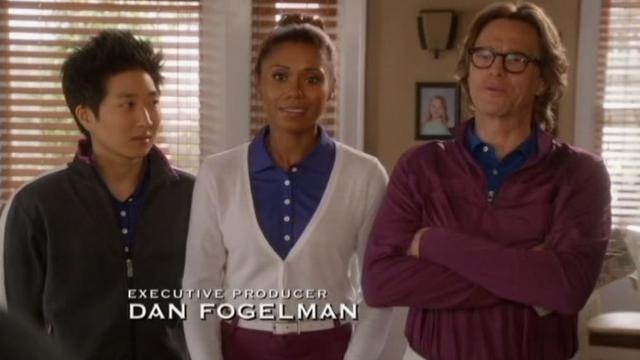 While Marty goes off to show Larry his cool suit from their high school dance, Reggie asks Debbie to explain more about how she met Marty. Time for mimosas.  Reggie: “she’s pretty fast with the excuses for the mimosas”.

Debbie breaks into the long and tawdry story of how she and another guy went to the dance. The other guy ignored her, and she found Marty who showed her respect and kindness. Then they danced to Dream Weaver. 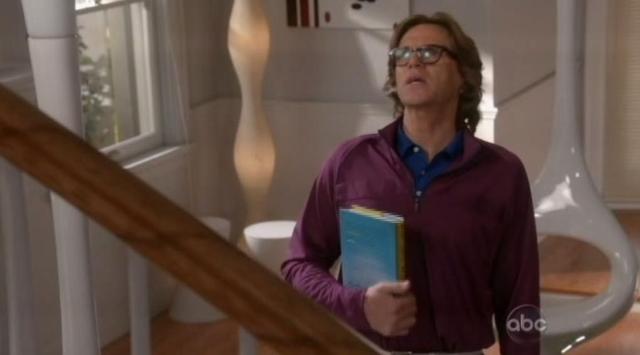 Later, Jackie bursts into her house to announce to Larry that she wants a “will they, won’t they”. Larry tells her to order one. She can use the credit card. Great line!

Once Larry understands that Jackie wants a love story of how they met by an evening at the high school dance, Larry is less than enthusiastic. “You are taking me to that dance,” demands Jackie. “I guess that’s what I’m doing this weekend,” Larry mutters to himself. He has seemingly learned at this stage to give Jackie what she wants. 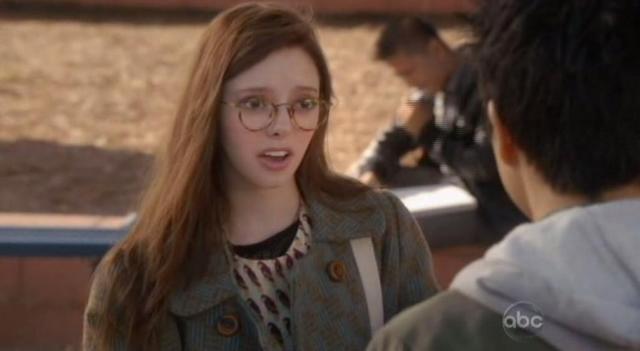 At school, Reggie sees a young woman who is even more socially inept than he is and asks her out, believing, that if he brings Ms. Wrong to the dance, that he will finally hook up with Ms. Right, in the shape of one Amber Weaver. The man has a plan. 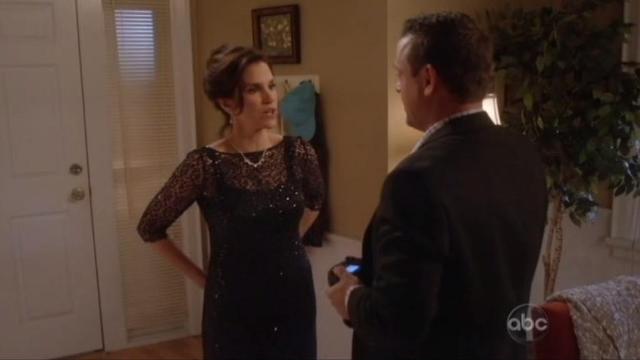 The night of the big dance, Debbie looks wonderful in her dress. Marty looks like he just threw on a jacket over his everyday cloths. But Debbie bought him a boutonniere dressing it up a little. Amber comes down the stairs looking lovely, except for that attitude. No pictures, says she, as she dashes out the door, not even giving her parents a chance to meet her date, Jeremy. 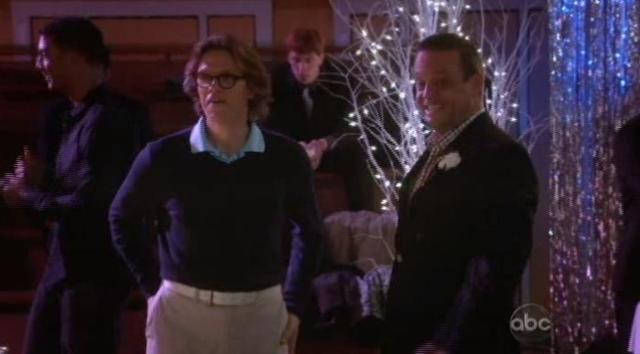 At least someone is having a good time. Larry and Marty are really enjoying bullying the teens as they stride around the dance, in charge. Larry, grinning like the Cheshire cat blurts, “Oh, I’m so glad I came.” Marty’s reply, “Let’s go outside where the kids smoke and watch them scatter like cockroaches.” Naturally, they are paying little attention to their wives, which is not going over well. 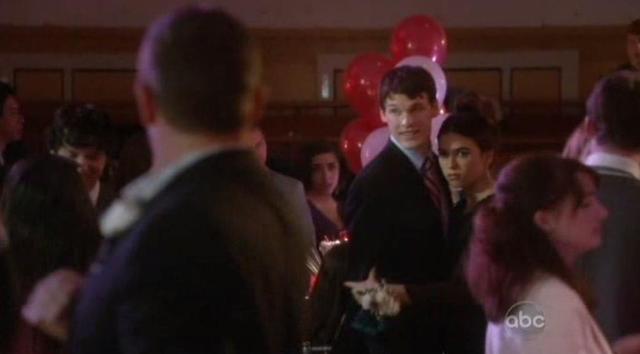 Amber is enjoying being the belle of the ball and the envy of the other young women. However, the fly in the ointment seems to be that Jeremy is somewhat fixated on himself. She does get a dance with him and an opportunity to glare at her mother while Marty shows his funky moves to Debbie. Time for a distraction, send Marty to get punch. 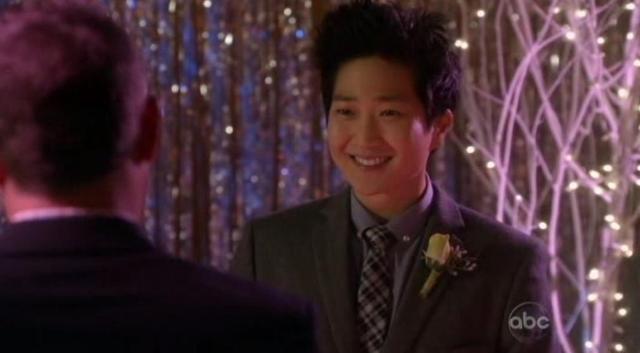 At the punch bowl, Marty finds that Reggie believes he will find his soul mate there because Debbie told him that is how she and Marty met. Naturally, Marty clears that misconception up very quickly.

He apparently did not break off the romance with his date when he met Debbie. In fact, he made out with her, then returned to Debbie. There is a word for that, Marty – buzzkill. 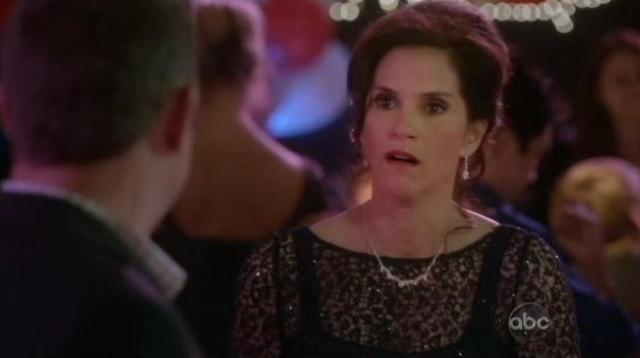 Unfortunately for Marty, Debbie overhears his real story. Nobody may really know how they met their soul mate, Marty states, “…or if their marriage was based on lies!” finishes Debbie, extremely angry and hurt.  She storms out and finds Jackie. Time to be miserable together. 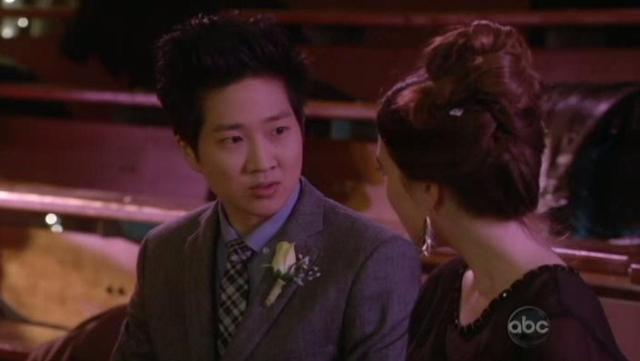 Meanwhile, back at the dance, Reggie unburdens himself and comes clean with Amber about how he feels about her.  Poor Reggie. Amber does not return his affections. What comes next? Reggie joins the misery loves company duo. 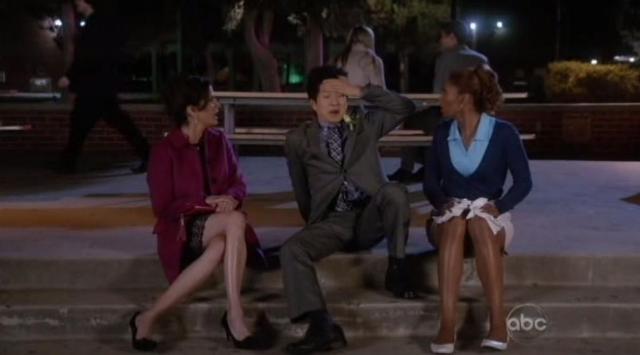 Debbie explains most of the solution to heart-ache to Reggie, but the real advice, at least for Debbie, comes, unknowingly from Jackie who tells Reggie that Debbie will also find her soul mate. “she has discovered it isn’t Marty.

But she will get back up there and find him, despite her age”.  Debbie automatically denies Jackie’s comments, and as she explains all the things about marty that do make him her soul mate, she realizes that he really is. 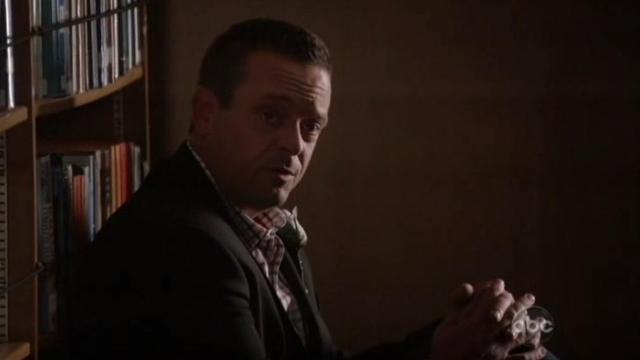 Debbie finds Marty in the Library. He admits that all the good sulking places were already taken by crying, puking or sulking teenagers”. Then, he apologizes. What a good guy he is, Debbie. Keep him. Then they get to make out in the library to the song, Dream Weaver. 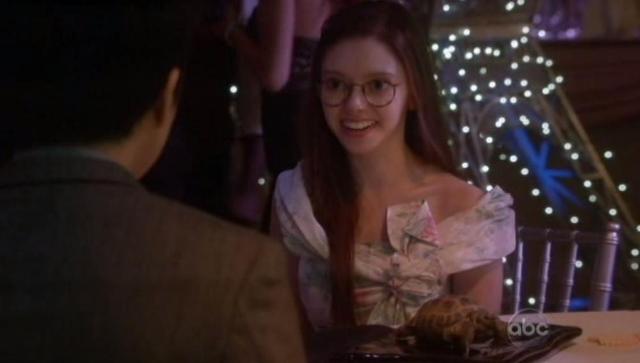 Giselle (Lora Plattner) is entertaining her turtle at a table when Reggie shows up. He apologizes for his earlier behaviour, and they both admit to being weird.  Weird can be good. Weird just means you can be yourself and not care what other people think about you instead of just following the crowd. Good for them. 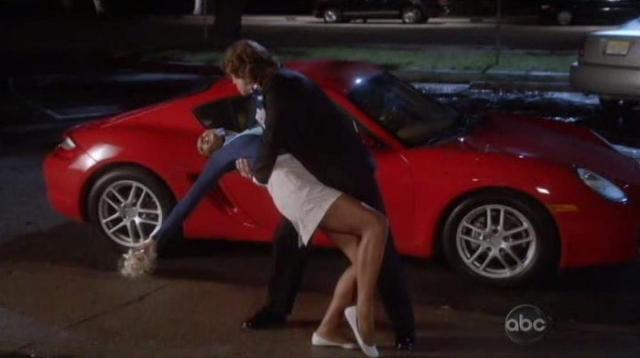 Jackie is on her way home. She exits the main entrance to the school to find Larry leaning against a very fancy sports car, looking very dashing. He has also changed into a very attractive tuxedo.

He tells her he had to let her think that all was lost for the final moment when he rescues her to be so good. Everything is going well and it looks like a happy ending, until Larry sees some teens smoking again. He drops Jackie and heads toward the offending teens. Poor Jackie. 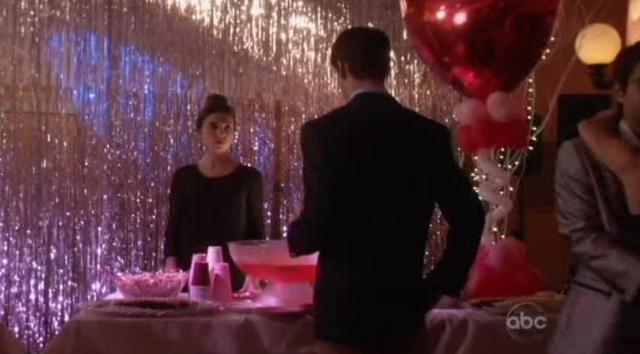 Back at the dance, Reggie admits to Amber that “turtle girl” is actually pretty cool. His night seems to be getting better. Jeremy approaches as Reggie leaves and drones on about himself. It looks like Amber is the one who is losing out. 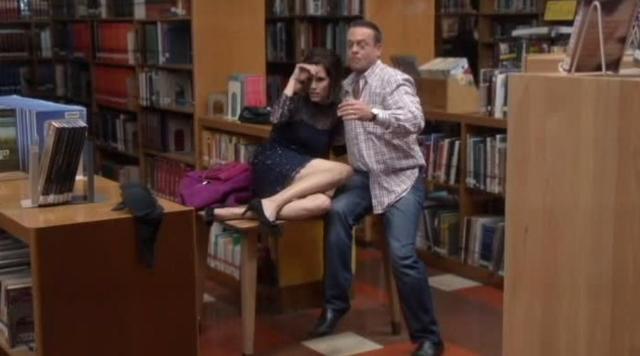 Well, Debbie wanted to relive her magical evening at her high school dance. She gets to do that when both she and Marty get caught by the local security guy as they are making out in the library. He thinks it is, “just sad”.

I am sure that, instead of sad, Marty and Debbie will see it as something to talk about for years to come!

Thanks to Kenn for final staging of our new audio video embed format in this review article, and many thanks to you for stopping by WormholeRiders News Agency!!

RSS feed for this post (comments)
Previous Post
« The Neighbors: Cold War or Larry Bird Loses Again!
Next Post
The Neighbors: “The Back Nine” Why Not Cha Cha Cha as Bad Kids Go To Hell! »
Avatars by Sterling Adventures
The Neighbors Our Alien Zabrvonian Analysis
The Neighbors Theme designed by Team WHR