Hey Stargate Fans, As we have indicated before, we fully expected to see a return of the mutinous crew persons from Stargate Universe “Faith” who desired to remain on the planet to seek a “better life”. Well folks tonight is the night when they return to Destiny in the Stargate Universe episode “Visitation” just in…

END_OF_DOCUMENT_TOKEN_TO_BE_REPLACED

Update July 06, 2010: Several stars have confirmed they will be able to attend the Auroris Entertainment Pre GateCon Party being conducted at The Canadian on Wednesday July 07, 2010 bringing the total to SEVEN! They are (listed in alphabetical order): The lovely Ms. Genevieve Buechner of Caprica recently interviewed by WHR . Interested in…

END_OF_DOCUMENT_TOKEN_TO_BE_REPLACED

Fellow Fans, The annual Stargate Fan party, organized and held by Patricia Stewart -Bertrand o f Auroris Entertainment, was full of laughter, chatting, and an all-around great experience which I would not hesitate to recommend to anyone. In fact, if you are in Vancouver next year for the convention, you ought to consider coming into town…

END_OF_DOCUMENT_TOKEN_TO_BE_REPLACED

ld at the Marriott Hotel near the International Airport. The reason for my tardiness to see the infamous Ba’al

was a brief business meeting with Gary, one of the owners of Creation Entertainment.

The WHR team then held an impromptu meeting regarding potential for scheduling a private room for video interviews with some of the stars at the convention. These types meetings occurred all weekend long. Without going into detail, our team greatly appreciated all the courtesies extended by Creation Entertainment to WormholeRiders News Agency.

We thank you Creation Entertainment! 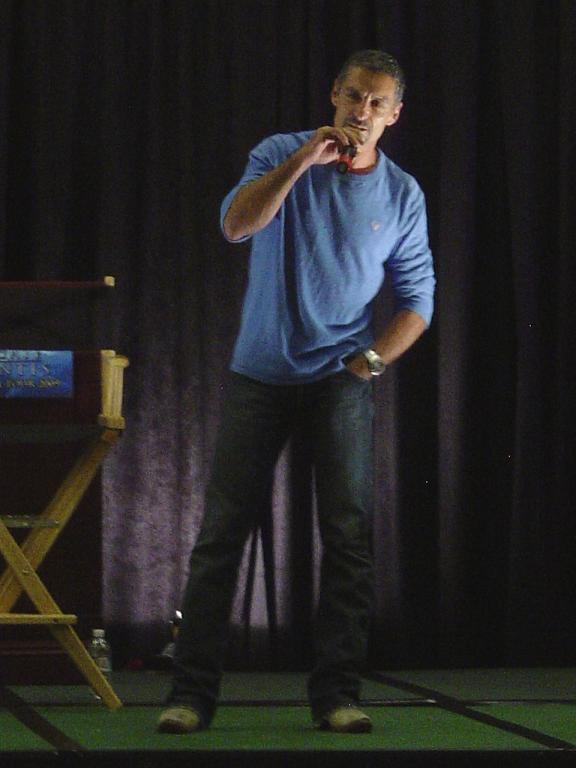 Before we begin, WHR asks that if at all possible, please donate today to Cliff’s charity “Karma Dog Rescue”. Cliff discusses his devotion to this charity later in this report.

Please click the Karma Rescue banner to make a donation. Karma Dog Rescue is a very worthwhile cause. Thank you.

A friend informed me that not only did Cliff Simon enter the stage to a roaring round of applause, several ladies were said to have swooned and passed out when he arrived! For goodness sakes, Ba’al was wearing cowboy boots with denim pants and a rather tight fitting blue long sleeve t-shirt rolled up to his elbows. Cliff’s outfit displayed the fine shape of his physique to the delight of Cliff Simon fans filling the auditorium. 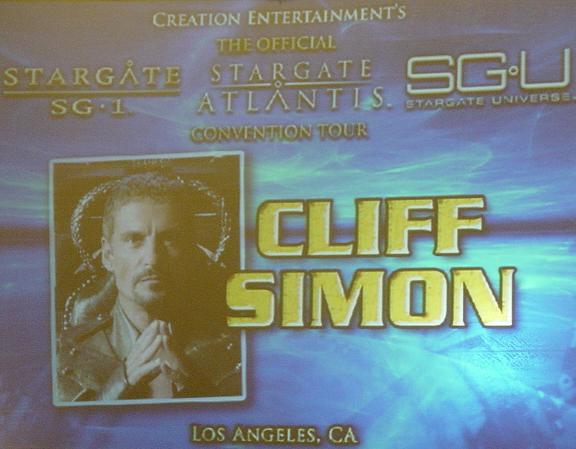 This is fan fiction: I looked around the auditorium for evidence of this fact only to see that the entire female audience (every single one  I might add), were indeed being evacuated by Stargate after a Goa’uld Ring Transport activated by one of Ba’al’s Death Glider’s from an Ha’tak known to be in orbit above the Earth! The sound of the Ring Transport brought wave after wave of Jaffa ouside the auditorium! Jack O’Neill, Dr. Samantha Carter, Daniel Jackson and Teal’c were trying to help, but even they would have no effect on what was transpiring as the empty seats below clearly illustrate!

If you click the video below and look and listen closely, you can see and hear the Death Gliders, the Ring Transport and see Ba’al’s evil minion Apophis activating the Ring Transport and the Stargate! And oh my God, even Sha’re and Skarra were helping Ba’al kidnap these nubile women! I knew then and there we would never see any of these lovely ladies on Earth ever again as the Ring Transport cycled over and over and the women were whisked away by Stargate to a life of fantasy with the false God Ba’al!! It was hard to believe, but each group of ladies had a very pleasant smile on their faces! Worst of all, each of them appeared to be quite pleased to be selected! It was obviously the beginning of the end of human kind here on Earth!

No one ever knew precisely what System Lord Ba’al had in mind for the several hundred beautiful women Stargate fans he had just procured, but many, including I suspected that it would include making ever more Ba’al clones and other forms of servitude of which not a single woman was found to be protesting! Yikes! There were even rumors that women outside the hotel were in fact rushing the auditorium, in fact begging to get in line too as Death Gliders could be heard firing on the innocent victims!!

What the heck was going on here! With this kind of Ba’al popularity, Earth was destined to be overrun with more Ba’al System Lord clone’s in very short order. Heck If I was a woman, I too would have been in line at the Stargate in order to spend some intimate time with the most famous, extremely popular, and very long lived “baddest bad guy” in all of Stargate franchise series history! The only thought I had left was did Que’tesh know what was happening and what were Ba’al’s plans for us men!

My throat tightened with a GULP!

Now that Ba’al had secured several hundred gorgeous concubines, he turned to the remaining humans, all males in the audience to let us know we also had job security! We shuddered as a collective group when Ba’al informed us that after his appearance we would be reporting to his Naquadah mines for the remainder of our miserable lives! Ba’al then proudly displayed his personal collection of throwing knives, bragging that he had used them in “Abyss” to torture and kill Jack O’Neill over and over again! Fortunately Jack had been rescued by the then Ascended Dr. Daniel Jackson! Ba’al plainly told us that if we disobeyed in the slightest, we too would get to “feel” his throwing knives most personally and we all knew Dr. Jackson would not be able to save all of us!

To the man, we quickly looked to the doors for a way to escape only to find Jaffa guards led by towering [and smiling] Valerie of Creation Entertainment blocking all of the exits! [shown above right]. We knew our time on Earth was now limited to about 45 minutes more freedom! Double Yikes! It was plainly obvious Creation Entertainment was deeply involved in this conspiracy probably in exchange for having their lives spared when Ba’al conquered the Earth! We were doomed and we knew it right then and there to a Ba’al alternate time-line!

Worst of all, Goa’uld Ba’al apparently now had a female First Prime in Valerie! We heard later she was found partying and enjoying adult beverages at a Karaoke event obviously celebrating her dastardly complicity with the System Lord Ba’al. The pictures here prove beyond a shadow of a doubt that Valerie was indeed Ba’al’s new First Prime as we looked forward to slaving away in a dark dank Naquadah mine on some undesignated planet!

Excuse my little fan fiction fun here folks courtesy of a few fan fiction fair use news clips from MGM Studios, but whenever I see Cliff Simon in an SG-1 episode or the Stargate SG-1 movie, ‘Continuum’, I cannot help but think of a simple yet enduring fact; Ba’al is likely the greatest villain ever created over the course of the ten (10) years of Sta 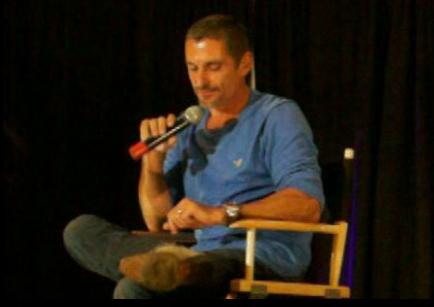 rgate SG-1 series and the two follow on movies. Nothing against Anubis or any other villain’s, they were wonderful in their own right, but let us be honest with ourselves people, Cliff Simon is without doubt the most wonderfully “bad” male System Lord in Stargate history. And when we say “bad” we mean the nothing but the best and here he was in person, in the flesh!

Accordingly Cliff had immediately started with questions and answers after his introduction by Creation Entertainment staff. Cliff almost immediately sat in the director’s chair on stage and did not leave it until the end of his entire panel performance on 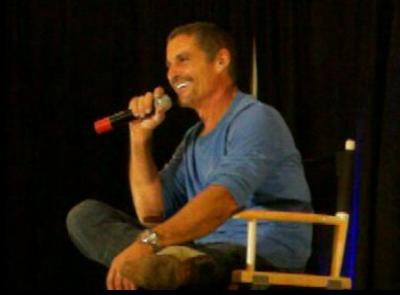 stage. Now some would think this might have made his appearance less than lively. Quite the contrary, Cliff’s gestures throughout were very entertaining and his facial expressions made his time on stage very lively indeed! The first question asked was eternal.

Fan Questioner: “What was it like to play a bad guy like Ba’al and work for Richard Dean Anderson on Stargate SG-1?

Cliff Simon:  “He is just the right degree where he is not unfriendly or he is not intimidating to a guest star coming on to the show. He is not an intimidating guy. He did not act like you know, ‘you are on my show’. Even though in all those years he was an executive producer, but Richard never acted like ‘that’.  He was always a nice person to work with”