The Neighbors: September Fools or Debbie, I Aged Your Kids!

Debbie (Jami Gertz) and Marty (Lenny Venito) Weaver rush to the alien’s household next door on the pretext of an emergency requiring a fire extinguisher. Of course, as with all situations in The Neighbors, things are not what they seem. There is no fire, and no real emergency.

Larry Bird (Simon Templeman) simply has the need of a fire extinguisher because he does not have one. He is also finding September rather dull with no interesting holidays as part of the month. While we’re at it, how awesome that Larry keeps the fire extinguisher in the freezer. Since the aliens do not really eat, what else are they going to do with that particular storage device? 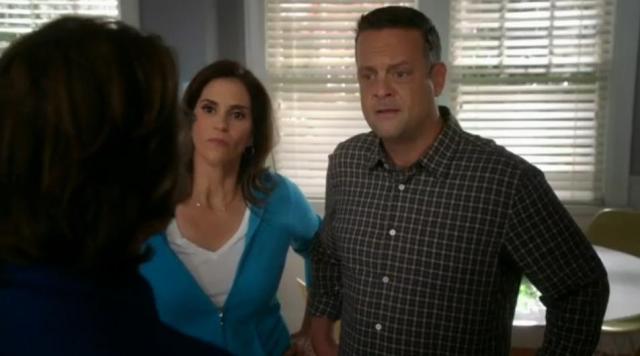 Oddly, they have completely forgotten Labour Day, but I guess that particular holiday is not fun at all. Instead, Larry decides that April Fools Day would make a better September event, so he proceeds to drive everyone crazy with the nuances of pranking the Weavers.

There is a minor nod toward October’s Halloween, or as the Zabvronians called it last season, Halloween-ween, when Larry directs their attention to Dick Butkus (Ian Patrick) hanging out on the ceiling dressed as Spiderman. 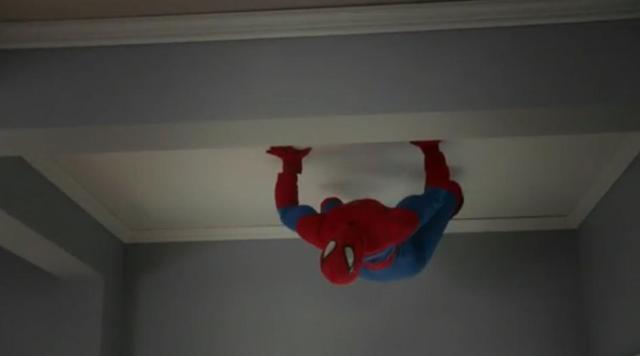 With a new season comes a new opening narrated by none other than Larry Bird. This really is such a cute show. The entire cast is well chosen and very well suited to one another. I wonder if Larry has sorted out his financial difficulties yet. 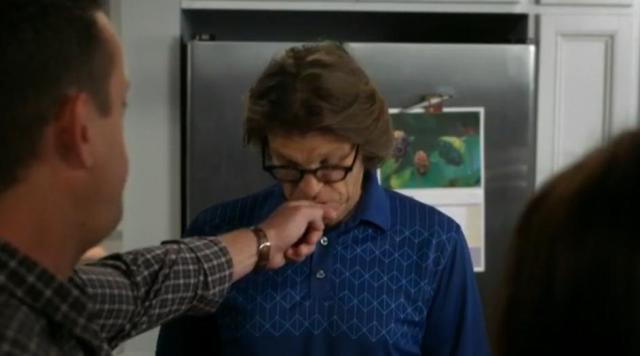 It is the occasion of the annual Weaver family photograph. The kids are both dressed up, uncomfortably. Since Larry has warned of some serious pranking, I was expecting him to do something silly such as the usual novelty pranks found on line or at a local store. However, instead, Dick Butkuss, now out of his Spiderman costume, shows up and invites the kids to join him in checking out something cool. 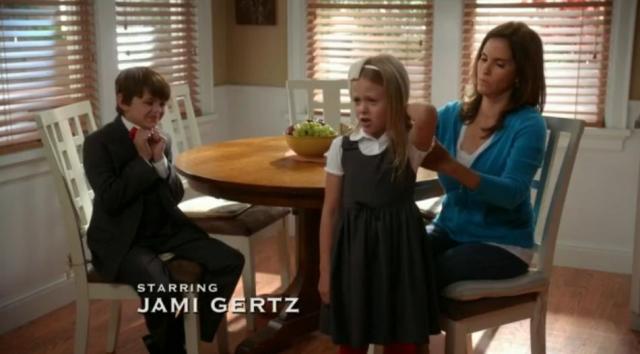 Every good alien needs a lab where they can complete their nefarious schemes…oh wait, nefarious schemes are always connected to the bad guys in the current comic book films that are so popular. Yet, Larry Bird has a lab. He uses it to show off a couple of the gag pranks that are popular with the juvenile boys in our culture. This says a little about Larry. It also says a little about Jackie Joyner-Kersee (Toks Olagundoye) who arrives to experience them. She is impressed with the fart bag, but not the gum snap. His reply, “that one’s a keeper”. 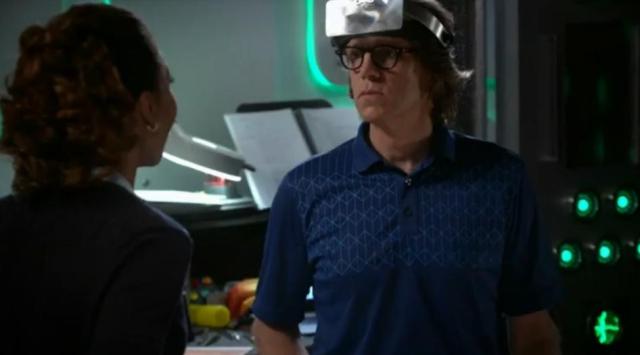 To continue part of the plot from last week’s episode, Jane (Megan Park), Reggie Jackson’s (Tim Jo) soul mate from another planet is still hanging around. This really creeps out Amber (Clara Mamet). Reggie decides to prove he loves Amber by telling Jane that it is time to go home. This is where it could have gotten interesting. As a group of aliens, there are so many clever things they could do to make her disappear; and as an alien, there are so many more clever things she could do to return. None of that happens here. I hope it does in a future episode. 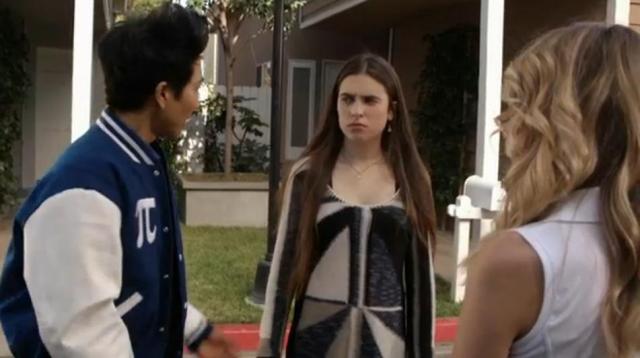 Reggie becomes Larry’s next prank victim with, as Reggie calls it, another of his father’s juvenile shenanigans, when he experiences a bucket of water dumped on his head. I do not know why this bothers him so much. After all, in the last episode, the aliens admitted to being mostly plant based. 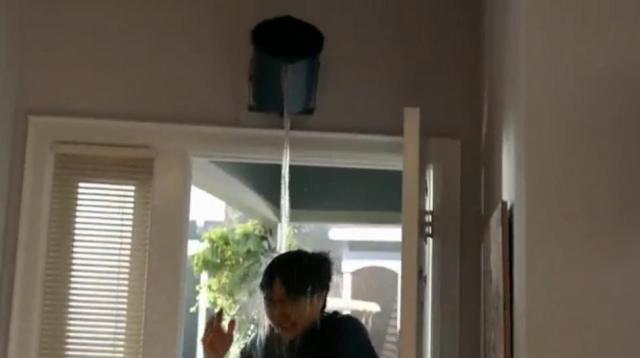 Reggie enlists Jackie’s help in getting rid of Jane. They manacle her and take her away with the golf cart. Poor Jane. You know, writers, your audience is becoming attached to Jane. It might be a good idea to resolve this before we become wrapped up in this character. 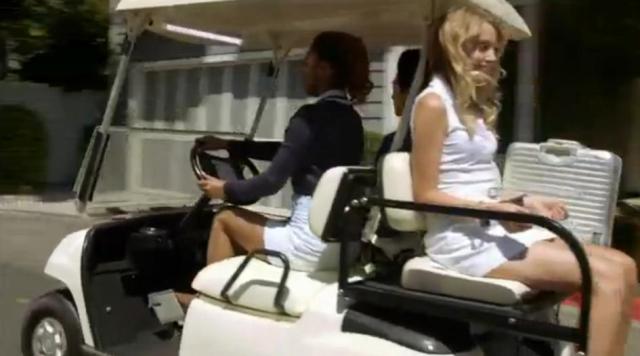 Dick has returned to the Weaver household. He has a confession to make regarding Abby (Isabella Cramp) and Max (Max Charles). He has aged the kids. This, of course, does not sit well with Marty and Debbie. At first they do not believe that the kids have been aged, so they ask a variety of personal questions, which the kids are able to answer. Finally convinced, Marty tells Dick to get his father. The Max and Abby copies in this episode are played by talented actors Kevin Thompson and Tracy Thompson. 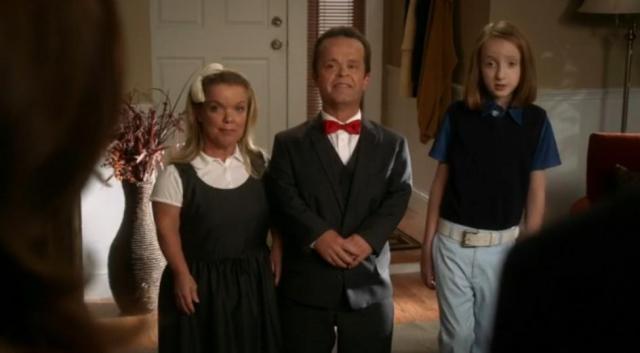 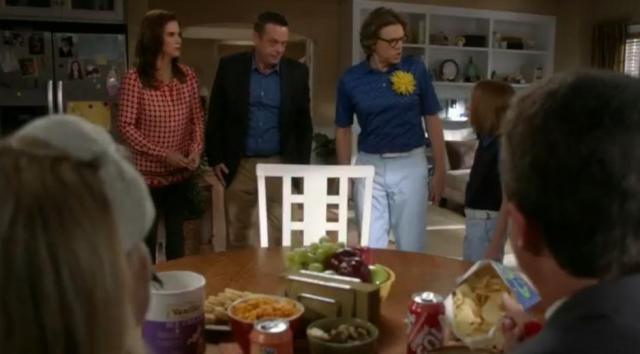 Larry and Dick return to their own home where Larry tells the real Max and Abby, “I’m pranking your parents”.
I must admit that I was fooled by this very clever prank. Larry keeps Marty and Debbie distracted by the lame pranks while he hits them with his super duper prank. Well done writers! 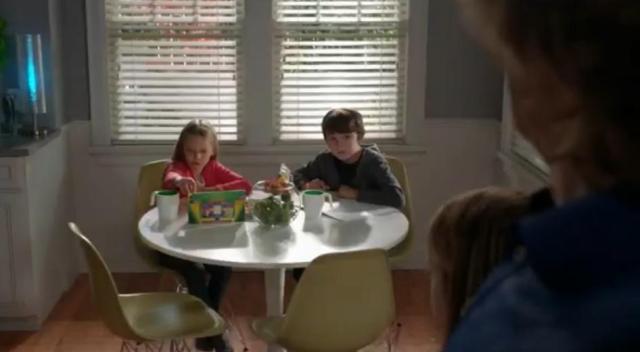 After dropping Jane at the bus station, and giving her a wad of cash, Jackie and Reggie leave. They do not get very far. Reggie feels guilty, so he returns for Jane and brings her back to his place…to sit on her luggage outside his front door once again. Amber returns to see her wearing his letter jacket. Hey, she was cold, right? 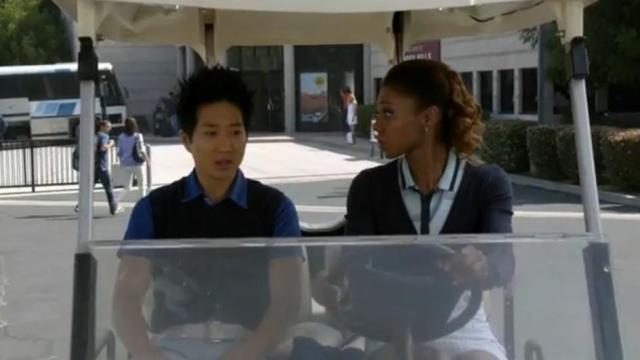 As Debbie assists the fake Abby to get ready for her bath, and Marty teaches the fake Max to shave, Larry shows up with the real Abby and Max. Both of the kids look as if they are enjoying the prank more than Larry is. 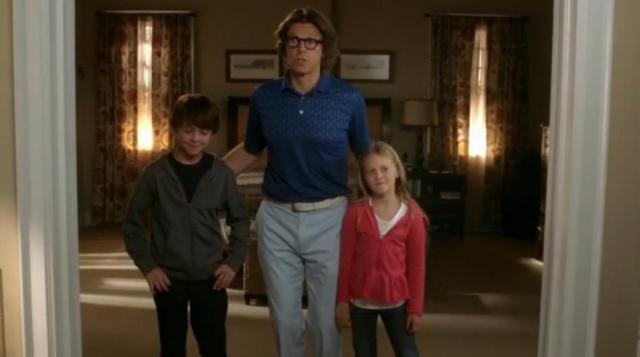 The episode ends with the Weavers finally getting their photo taken. Just as the photographer snaps the image, the two Max and Abby copies walk by. The photo end up being not quite what Debbie wanted. Amber has a nice smile, when she does smile, that is. 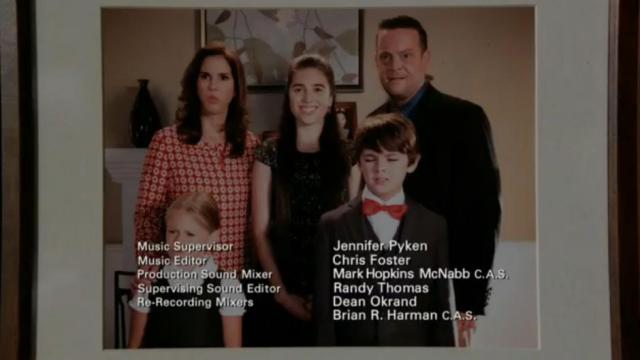 One important thing not to do when you watch this show is to try to think things through. In this case, Abby and Max are supposed to be aged. We find out that the two middle aged children are not really Max and Abby. They are dressed the same, but they are not the same people. So, where did Larry Bird find identical clothes? And more to the point, if he is having difficulty financially, how did he afford them? We find out that Abby and Max are changed out of their dress clothing and into play clothes, so that explains the two sets of clothing problem. However, the two older people also borrow the kids robes which they do not want back…As I said, do not think too much with some of The Neighbors episodes.

Great quotes this week are:

Marty: Why do you need a fire extinguisher?

Larry: Because we don’t have one.

Dick: Ooh, you guys look like Martha Stewart literally made you in her lab.

Jane: Reggie, you are my destiny. The universe encoded my love for you in my DNA. Amber Weaver won’t even wear your jacket.

Reggie: You can’t stay here. Soul mate or not, it’s super creepy that you stand outside my house.

Larry:(to Debbie and Marty) If you think this was fun, wait till you see what I’ve got planned for April.

Thanks to Kenn for final staging of the audio video embed of Ben Rector’s great song ‘I Like You” that was featured in the episode in this news article, and manhy thanks to you for stopping by WormholeRiders News Agency!