This episode begins with Reggie Jackson (Tim Jo) and Amber Weaver (Clara Mamet) enjoying an evening together. They are watching a marathon documentary about the friendship between an elephant and a baby duck.

I cannot help but assume there is a connection between this documentary about the elephant and the duck, and the Weavers and the alien neighbors next door. But then, who is the elephant, and who is the duck? 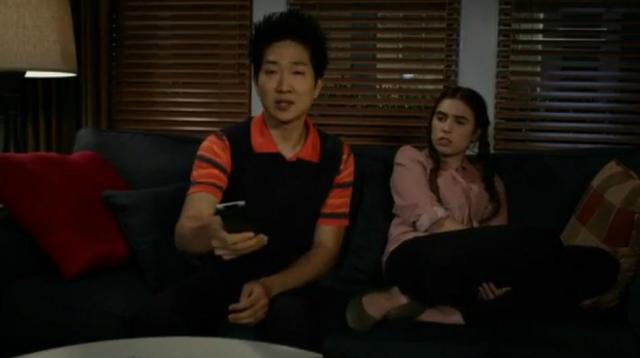 Meanwhile, Debbie (Jami Gertz) and Marty (Lenny Venito)  are playing the board game, Taboo with Jackie (Toks Olagundoye) and Larry (Simon Templeman). Dick Butkuss (Ian Patrick) looks on. Dick seems to spend most of the episodes with the adults, observing and making quips and comments.

It is possible that the writers do not know what to do with his character. In some ways, I think his character is wasted. He could be getting into trouble more often due to his curiosity. Come on, writers, give his something more interesting to do. 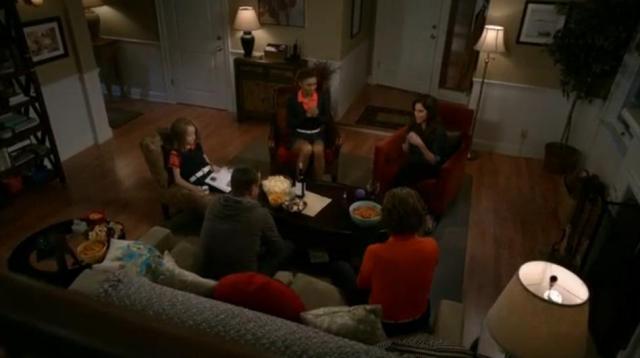 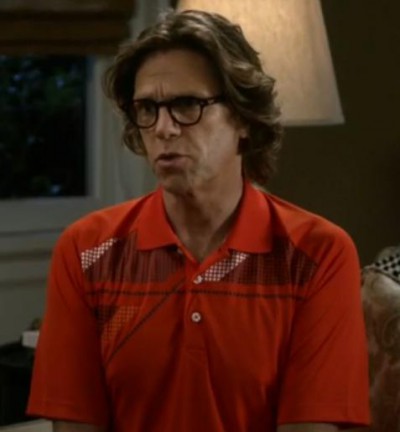 As the game progresses, Larry sarcastically and arrogantly comments that he can defeat the game easily. Jackie corrects Larry by telling Debbie and Marty, “Oh, just ignore him. He gets expositional when he gets nervous”.

He gets what? It looks like this means that Larry has the need to explain things when he gets nervous. In other words, Jackie completely misses Larry’s sarcasm and his need to put the others, especially Marty down.

It turns out, through playing the game that Jackie knows almost everything about Debbie, but Debbie knows almost nothing about Jackie. How often has this happened in friendships where one friend is the attention hog and the other is the listener who seems to encourage or act as co-dependent to this very uneven friendship.

Marty and Debbie have accepted that their role in the friendship they maintain with the aliens next door is to act as instructors for the human condition.

It seems, however, as this episode progresses, that they have not yet figured out that there is a great deal of knowledge they can glean from the alien community. This, above all, is the most frustrating aspect of this show for me. I love the comedy. I love the talent of the actors and how well they communicate with each other. I would like to see more of this comedy revolving around mistakes the aliens make and how Debbie and Marty resolve those issues.

Since Dick is doing such a great job of observing, he has observed that Marty is eating almost constantly during the game. He comments that Marty is, “eating his feelings”. Incidentally, Larry also responds negatively to Marty’s suggestion to watch network t.v, “…on a Friday night? No, gracias!” What a great line. 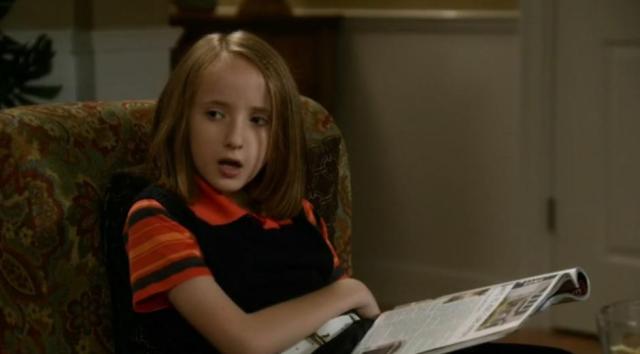 When the evening ends, Larry, Dick and Jackie return home and do a short verbal post-mortem of the evening. Jackie wonders if Debbie has always been so self centered, while Larry believes that he and Marty have nothing in common after all. It looks as if the friendship may be dissolving. Back at the Weavers, Marty and Debbie are also reviewing earlier events. Debbie realizes that she is a bad friend. 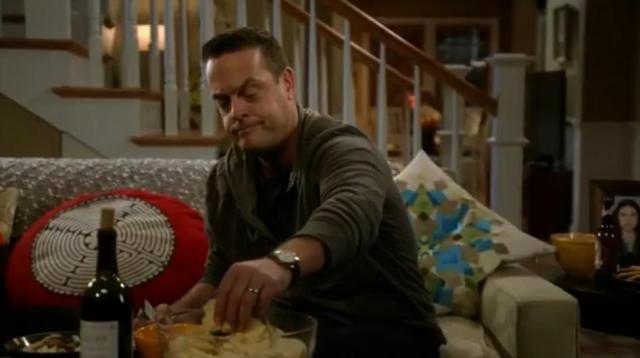 In the middle of the night, Debbie receives a visitation from the ghost of Marty’s flab – Dick Butkus. It is his turn to watch the Weavers anyway, so he is taking advantage of the opportunity. Dick tells Debbie that, despite Marty’s best efforts to turn into a blob, Dick will help him overcome his issues by letting him think Dick needs help. 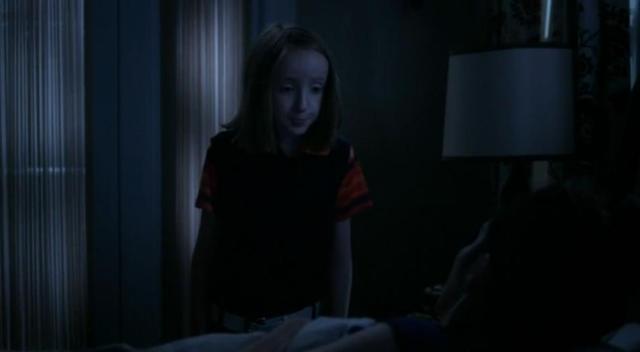 So, Dick waits for Marty to be available, beside the bed, as Marty sleeps. Next step, the treadmill in the garage. 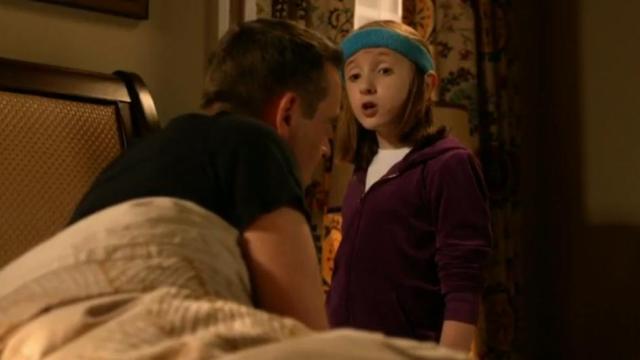 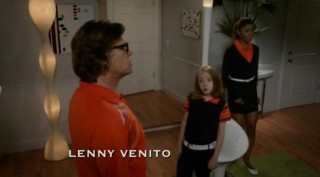 Meanwhile, Reggie and Amber are still enjoying the interspecies friendship between the duck and the elephant.

Alien papa Larry Bird simply does not understand the interest. No surprise there!

However, Amber admits that she is beginning to thaw. I suspect that this means she and Reggie will take their relationship up a notch in the next episode. 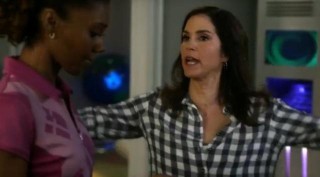 Debbie has made a decision. She will follow Jackie around to learn all about her interests in the attempt to become a better friend.

It seems that Jackie has a following of 8 people for her recorder’s enthusiasts group. Debbie is impressed. This day is now called Jackie Day. 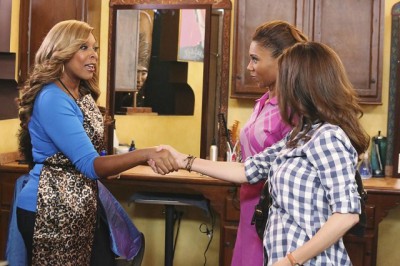 To prove her commitment to Jackie Day, Debbie puts her phone and Jackie’s on a nearby table. We know that will lead to trouble. They are off to Jackie’s salon for her hair appointment.

Dick has damaged his ankle while running on the treadmill. Marty carry’s him home on his back timed perfectly to the narration of the elephant and duck documentary. It seems that in this situation, Marty is the elephant and Dick is the baby duckling. Larry is more concerned with Dick’s precious ankle, so, off to the hospital with Larry, Marty and Dick. 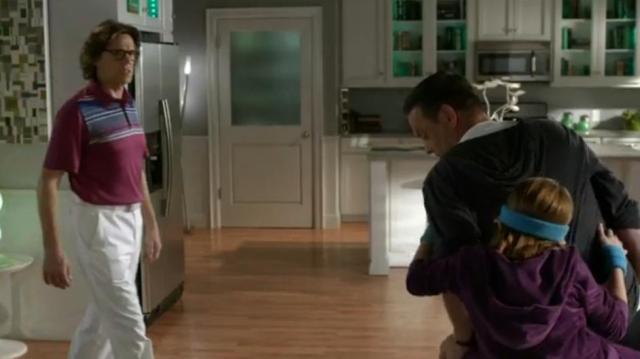 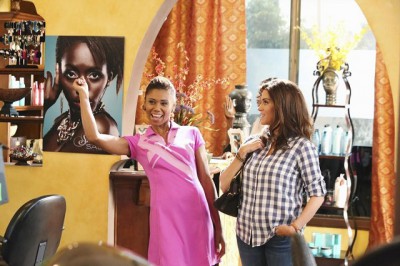 At the salon, Debbie discovers a whole new side to Jackie. She has a group of friends she shares interests with.

Debbie, of course, takes over. She insists on getting braids, just like Jackie (The hair dresser is played by Wendy Williams).

Only, Jackie does not get braids. She ends up being a small part of the Debbie braid party. Oh, my. Jackie, hurt, demands of Debbie, “You even managed to take this over. Unbelievable!

So much, Debbie, for putting me in charge today. Did you learn a lot about me while you talked and you got my hair?” 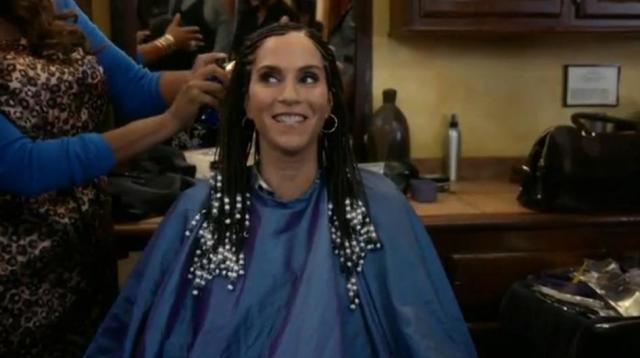 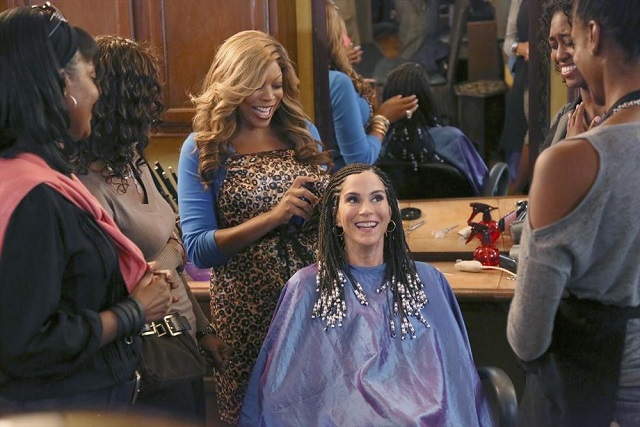 At the hospital, Larry is in a panic, demanding immediate action from every medical person nearby. In this case, the medical personal turns out to be a long suffering nurse, Wendy Worthington. When Dick would like to watch TV to take his mind off his ankle, Larry becomes completely unglued as the remote become the most important thing in the world. 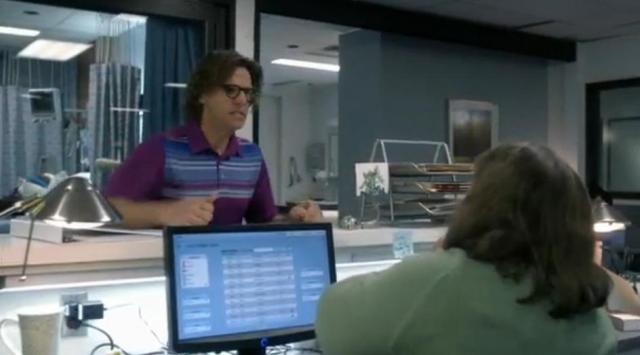 Once Debbie and Jackie get home, the elephant/baby duck documentary continues to narrate the relationship between the two families. Jackie enters, more than steamed at Debbie.

They both discover that Dick was taken to hospital, and even though she does not want Debbie’s help, she must rely on her to get her to the hospital. There, Dick continues to observe Marty eating more snacks. 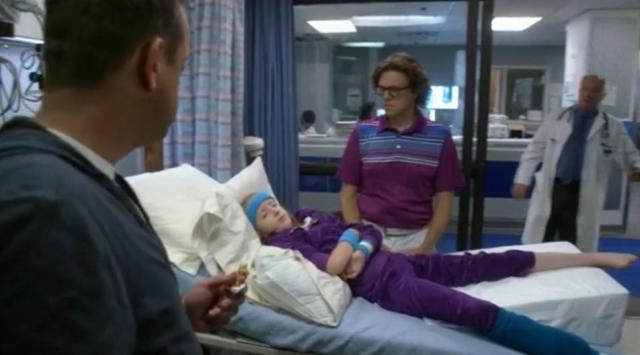 The doctor (Tom Virtu) finally arrives to take Dick for an x-ray of his ankle. Larry, still upset, wants Dick to get the best care, “not that Obama care that Fox news says kills old people, and lets illegal Mexicans get gay married”.

After a brief tirade about home planets and moons, Marty calms Larry down and helps him explain to the doctor that Larry is not psychotic, just a dad trying to entertain his son. 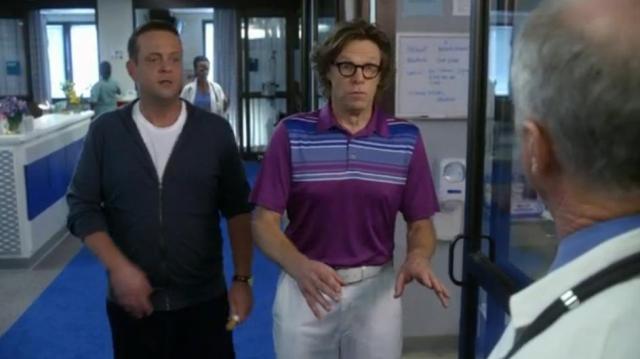 Debbie and Jackie arrive at the hospital. While waiting to hear about Dick’s x-ray, Marty wants to know what is going on with Debbie’s hair style. This, of course, leads to Jackie telling Debbie that the reason she so easily took over at the salon is because Jackie is boring.

Debbie responds with, “Do you think I would spend so much time with you if you were boring? Let me be clear, you are the opposite of boring. You are the most exciting friend I have ever had. You speak 10 languages. You’re gorgeous. You’re great at everything. You’re an alien.” 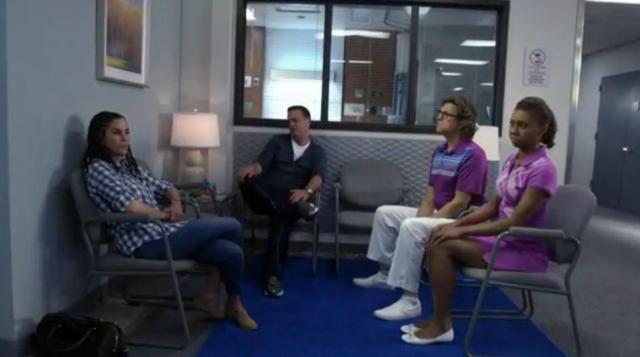 Dick returns in a wheelchair with a sprain, not a break. As they leave the hospital, Debbie tells Dick, “I guess your plan to get him healthy really didn’t work”. Dick replies, “Wrong. Today I got Marty his friend back. Study after study has proved that friendship is the best thing for the heart.” 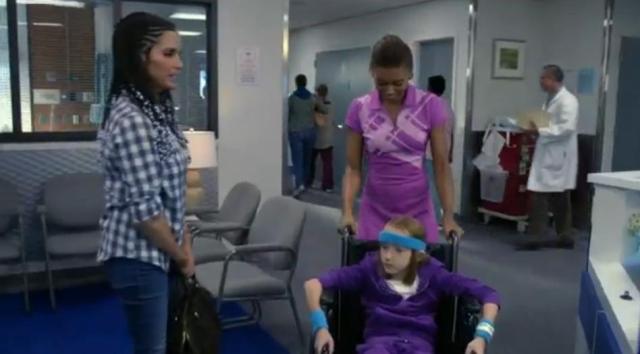 Reggie and Amber discuss the last moments of the documentary . Reggie will miss that cold awkward elephant while Amber says it is the duckling, “I used to hate the soft and fluffy, but now I just want to squeeze it’s little face and tell him I love him, yes I do”. Okay, Amber is losing it… 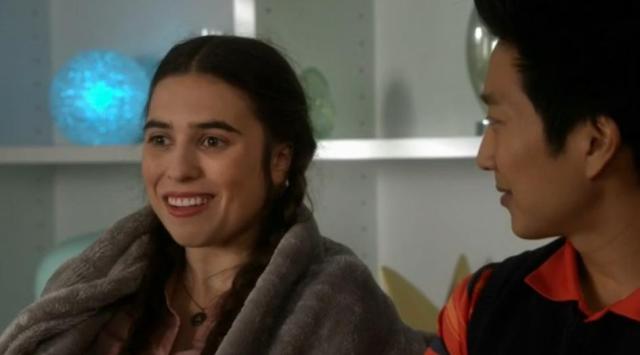 Everyone arrives home just in time for…” Bogo the elephant tried to show affection, and rolled over on top of the duckling”… Everyone is shocked, except Larry. He laughs out loud at the duckie’s demise. Evil Larry. 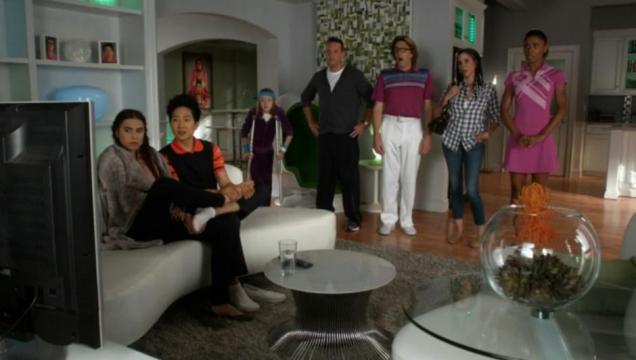 To end the show, Jackie and Debbie hold an impromptu and very noisy band practice in the garage with Jackie’s recorder and Debbie’s drums. It seems that, they need a little work. So, Jackie is not great at everything after all. 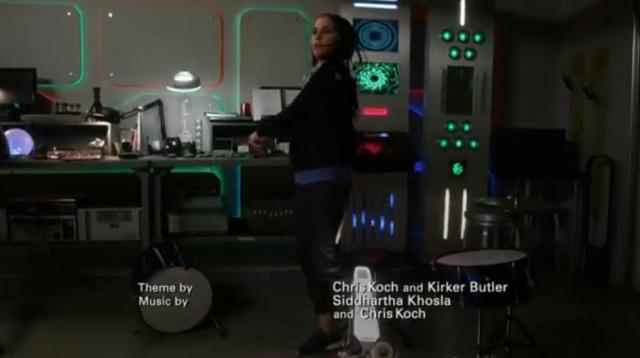 Despite the fact that there is a great deal of animosity between the aliens and the Weavers in this episode, it takes Dick and his ankle to bring Larry and Marty together again. Debbie and Jackie work out their own issues, and Amber and Reggie seem to come closer together, but then hit a road bump at the end.

What have we learned? That this show is never predictable. What direction I think the show will head in does not seem to necessarily follow in the next episode. this episode was written by Scott King.

Some of the best lines this episode are:

Debbie: “I look like predator. OMG, Alien vs. Predator!”

Marty (to the doctor, about Larry): “He’s not from around here.”

Jackie: “Back home I was the normal one. I was you. My girlfriends and I would sit around and talk about nothing and swap secrets and decapitate foreign marauders..”

Larry: “Oh, that’s hilarious. Finally, a show besides Cougar Town that knows how to end with a big laugh.”