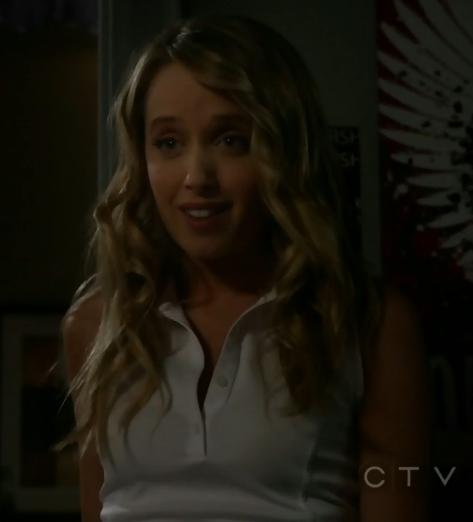 In this episode, Marty (Lenny Venito) and Debbie (Jami Gertz) take on the task of teaching Larry (Simon Templeman) and Jackie (Toks Olagundoye) about the dangerous side of humanity.

While they are getting the broad picture of living among humans and dealing with human culture, the Weavers learn that there is even more to teach when the two are excited over being mugged.  This, of course, is because they have no idea that they were even wronged – they thought it was a trade of their wallets and keys for the man’s knife.  Larry’s reaction upon learning what actually happened?  ”When he comes to drop off the knife we shall have words.”

The plot deals with two different angles about fear this week; Larry and Jackie’s encounter with a mugger, and Amber (Clara Mamet) and Reggie’s (Tim Jo) fear that they don’t, or can’t, love each other. 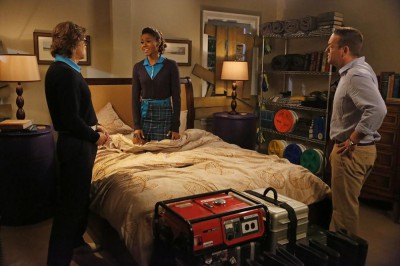 Ever since Reggie and Amber began to feel something for each other, it always seemed like it was all about Reggie trying to impress Amber while Jane just waited on the side for the enviable failure. Well, it finally happened, and it all came down to the lack of three simple words that were held back thanks to fear.

Marty has just returned home from work to discover that Max (Max Charles) is using the stairs as his own personal toboggan run. He has some very unique ideas for spending his time, including the use of a football helmet and a blow torch to fulfill his obligations as one of a group of “Kidiots”. Debbie is not impressed. 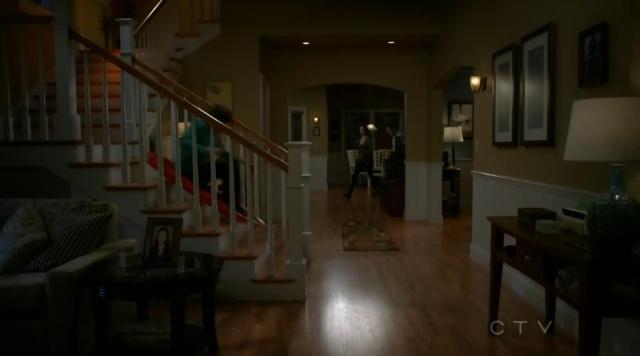 Enter Larry and Jackie who are pleased to discuss their latest human experience – a mugging.  That is, until they discover that it is not meant to be fun. Poor Larry realizes now that he has lost his favorite key chain, and did not even get the Mugger’s big shiny knife in return. 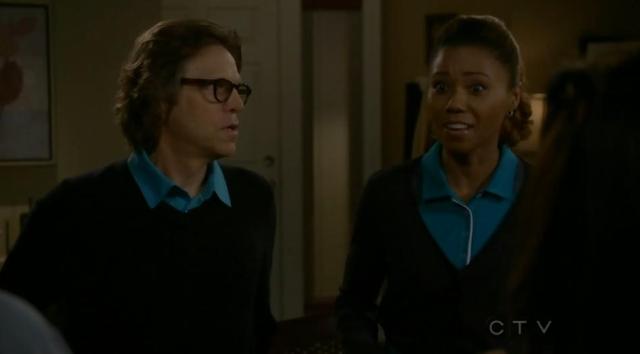 Meanwhile, Reggie Jackson and Dick Butkus (Ian Patrick) are having a brotherly discussion about Amber. Reggie confides that he knows Amber loves him, but every time he tells her he loves her, she replies, “thank you, or, I understand, or I’m hungry”. Being the very analytical alien that he is, Reggie determines that Amber is most likely to tell him she loves him when she is scared. I am not sure how that works out, but Reggie is convinced it will. 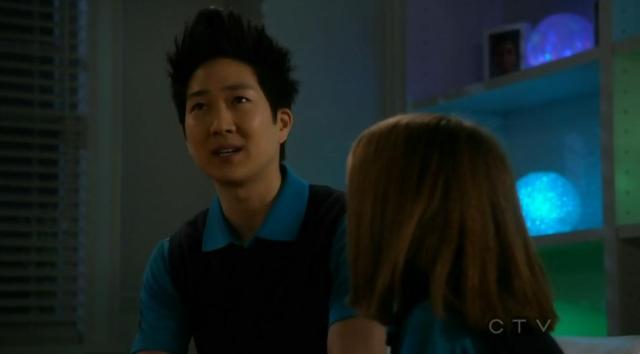 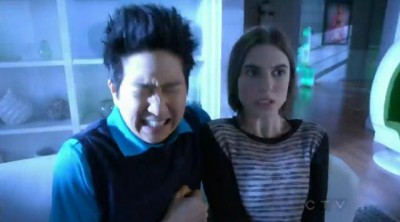 As the episode progresses, Dick gets it into his head that it is his job to try to frighten Amber. Unfortunately for dick, Amber already has several years experience of watching scary movies. She will not be intimidated by your run of the mill fright nights.

Then, lightning flashes, the garden door shakes, and in walks….Jane (Megan Park)! How terrifying. It is time for some girl talk with Amber. Now THAT is frightening. 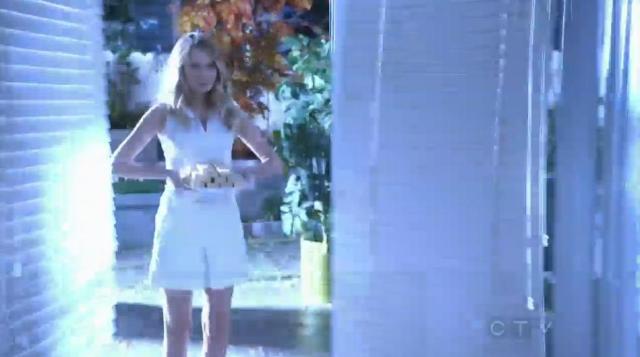 Back at the Weavers, Marty is trying to make it clear that it is important to lock doors before going to bed. Larry and Jackie obviously feel that the gated community is enough protection. Marty continues with all the evil out there, including global warming. 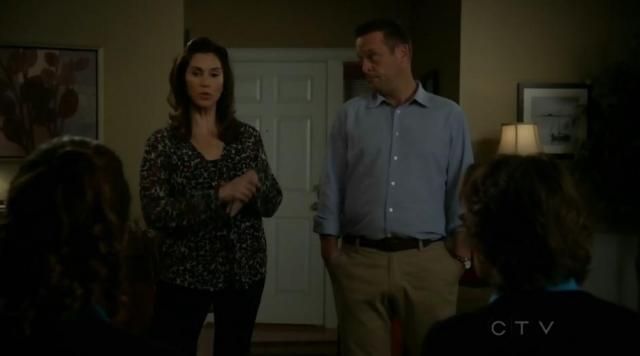 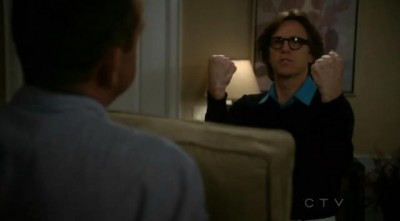 Jackie and Larry do not buy it. “You may wish to live in fear”, claims Jackie, “but we do not. We are leaving this house right now, confidently with our heads held high.” Larry agrees, “try as you might, we will not be frightened by you people”. Moments after they step outside, there is a scream and they are both on their way back inside, “Seems like we are scared of everything now”, says Larry.

The conversation turns to self defense as Amber and Jane walk past, wave greetings and head upstairs. Will Jane need to be rescued? We most certainly hope so.

Larry, confident in his abilities as ever, assures Marty and Debbie that he is well equipped to defend himself. After all, he led an intergalactic armada. It turns out that Larry is not the powerhouse of the family. There really is no surprise there. Instead, it is Jackie who has the moves, knocking Marty across the room with her Ninja kick. Larry, of course, is pleased. Marty, not so much. 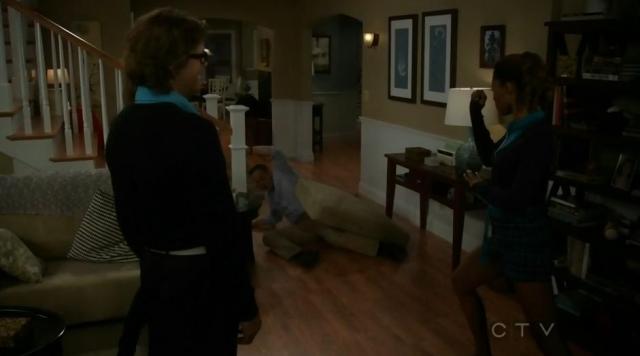 In Amber’s room, Jane asks what Amber wants to talk about. Amber gets right to the point – “all the things I’m going to do to you if you don’t leave us alone”. Debbie drops in for a moment to make sure there is no blood spatter on her daughter’s walls. Fortunately, there is none.

Back at the neighbor’s home, Reggie is still fixated on Amber while Dick has his own agenda, such as writing the word, “Murder” on the wall backward. Curiouser and curiouser, as Alice in Wonderland said. 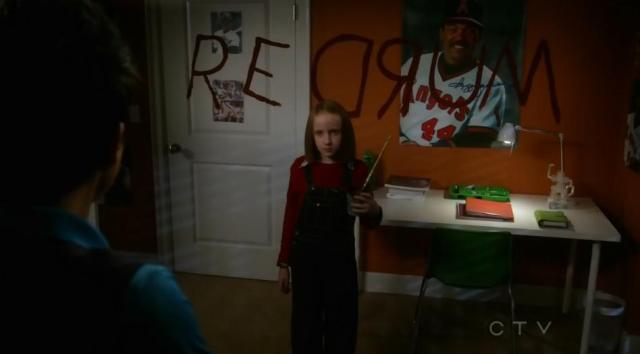 We switch again back to the Weaver home where we are introduced to one of Max’s friends, Travis (Matthew Royer). Max tries to convince his parents that letting him practice some stunts would be a good idea. One such stunt involves Travis with some knives in the kitchen. The clue here is that Marty and Debbie have no intention of letting Travis attempt this stunt on Abby (Isabella Cramp). Wise decision, Weavers. This is also the moment that they learn that Larry has a panic room in the Weavers bedroom. 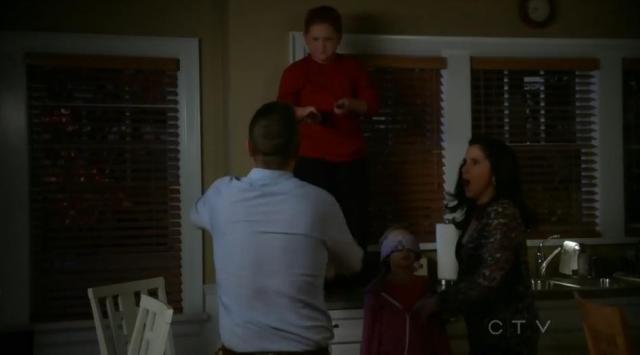 Marty asks the question everyone is wondering – “Larry, we left you alone for ten minutes. How did you build all this?” Larry’s answer is awesome, “For the hundredth time, we are a freaking superior species!” Their reasoning for creating the panic room makes sense, They locked themselves in the only place they feel safe – the safe, boring and predictable Weaver bedroom. Yep. 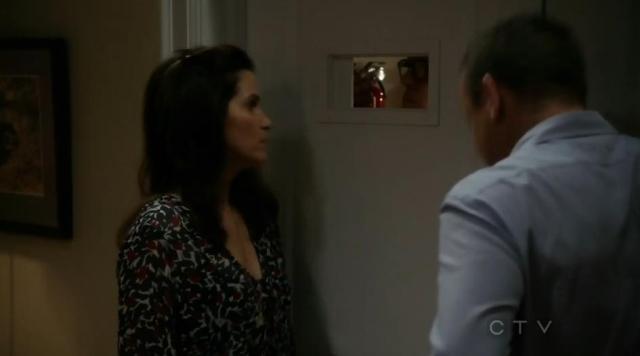 Since Amber and Jane are taking so long, poor Reggie is beside himself, fretting about what might be happening next door. “What if Amber doesn’t love me?” he demands of Dick. Seriously, have we not been through this in nearly every other episode? Teen aged angst was never like this in any generation. 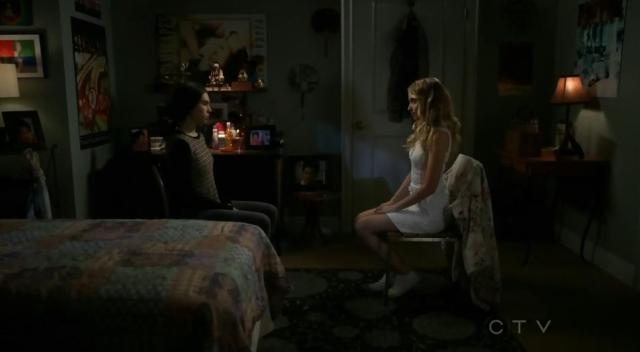 Moving on, Dick assures Reggie that, of course Amber loves him, and Reggie looks ridiculous. The pot calling the kettle black is strong with this one. To get to the bottom of things, Dick tells Reggie to ask Amber if she loves him. Wow! What an idea! Reggie is on it. 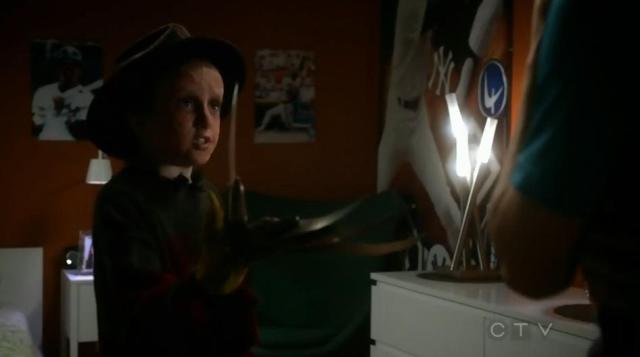 Amber receives the text message moments later. Buoyed with greater confidence, Amber attempts to reason with Jane only to get Jane’s snarky response right back that Reggie is meant for her and she will end up with him. 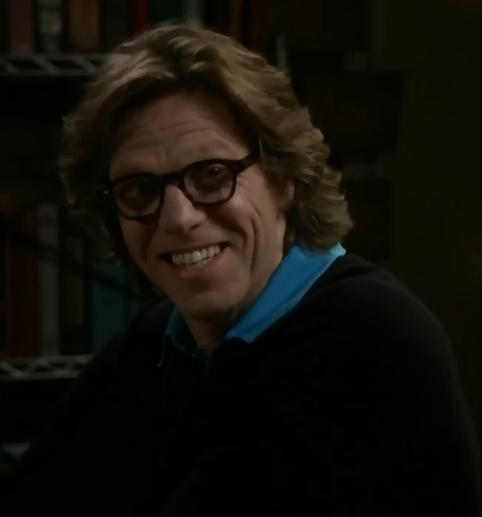 At the Weavers, Marty and Debbie suggest  telling each other what they are afraid of. Marty admits to being afraid of spiders, which is just hilarious to Larry. Debbie admits to being afraid of how they will afford college for three kids. Jackie is afraid of dryer sheets getting stuck in the dryer and the lint collector getting stuck in the dryer. Larry is afraid that Reggie and Dick will forget about where they came from…and the dryer.

Amber enters to tell everyone that she thinks she is losing Reggie to Jane, so Marty gets to wrap things up with the theme from The Facts of Life, which, for some odd reason, Larry seems to truly appreciate.

Debbie sits down with Amber on her bed to have a mom/daughter talk. Amber, it seems, has a tendency to give up when she is faced with a challenge. Time to go and get her man, Debbie tells her. 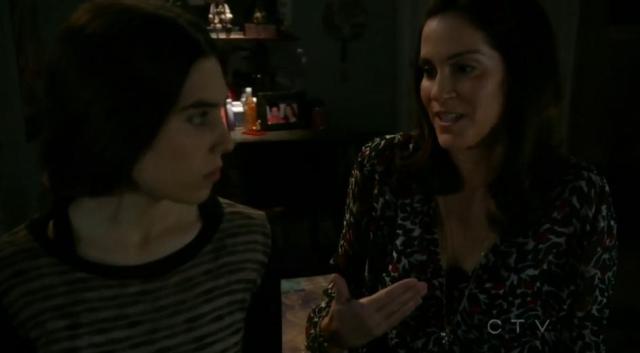 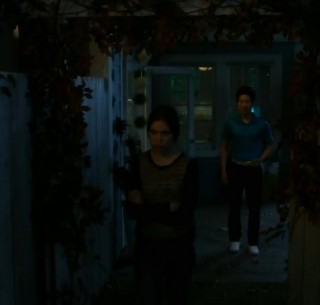 As Amber approaches Reggie and Jane, and notices how well she is able to settle Reggie when he becomes anxious, Amber looses her determination. She admits to Reggie that she does not feel the way he wants her to feel for him. Instead, she says she wants to break up. Is this the end of a beautiful friendship/relationship?

The big problem is that Jane is not a friendly addition to the cast. Do you remember Giselle, the cute shy girl with the pet turtle? When she was first introduced it felt like she could actually contribute something significant to the story. Jane, on the other hand, is just that girl who is far too popular because of her looks. The typical Hollywood girl next door. Writers, please walk away from the girl next door image and give us someone more substantial. What about introducing Reggie’s soul mate as some sort of super-intelligent mad scientist who had plans to overthrow the earth a la Pinky and The Brain?

As always, I love Larry and Jackie together. Simon Templeman seems to have a lot of fun with his character. Jackie is so earnest, yet still surprises. Reggie, although a very likeable character, spent too much time trying to be the perfect boyfriend. If he is going to be with Jane for a while, it should be interesting to see how this new dynamic plays out. I am still not completely sure about Marty and Debbie. She is a bit more bossy than I would like, but the dynamic between her and Marty works well.

We shall find out more next episode and we cannot wait for High School Reunion this Friday January 17, 2014!

Jackie: “Mugged, it’s another Christmas tradition like egg nog or being disappointed by a Will Smith movie?”

Larry: “We put our hands in the air and waved them like we just didn’t care, as is your custom”.

Amber: “That makes sense. Date night with a girl, her boyfriend and her boyfriend’s soul mate – the E.T. that won’t go home.”

Dick: “Someone on America’s Got Talent is actually going to have talent?!”

Debbie(to Marty): “Why are we friends with these people?”

Larry: “If I didn’t take risks, I would never have come to this planet, or let the Weavers live”.

Marty: “We’re getting very good at this raising three kids and four aliens.”

Comment (1) on “The Neighbors: Fear and Loving in New Jersey Is Hell on Amber!”