Welcome back to The Neighbors!

One thing is for sure when it comes to life with the neighbors, it is never dull. In this episode, Debbie Weaver(Jami Gertz) seems fixated on her daughter and the bonding that the two women have not yet achieved. Marty(Lenny Venito), on the other hand, seems to have the bigger problem – Larry. 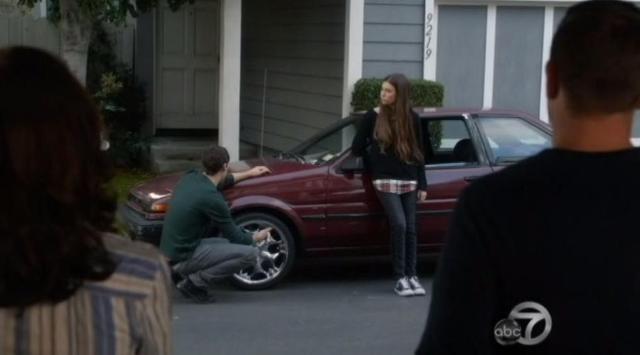 Eves-dropping on, I mean, observing Amber (Clara Mamet) interact with Jeremy (Grant Harvey), the coolest, most in-demand jock in school, who also has a personality like a wet dish rag, does not make sense to Debbie and Marty.

Amber, apparently, does not get it either. She spends most of her time gazing up at Reggie Jackson’s (Tim Jo) window, obviously wondering if she has made the biggest mistake of her life choosing this master bird-brain. 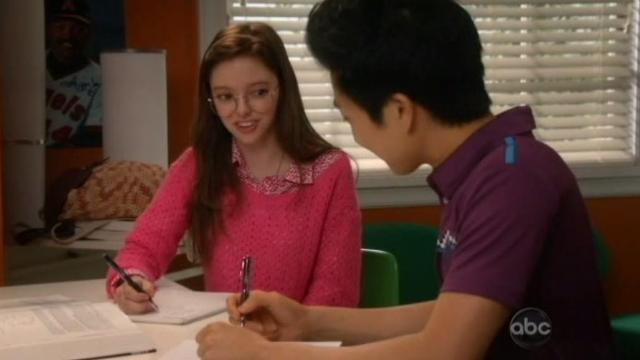 In Reggie’s room, he and Giselle (Lora Plattner) are doing school work. They look so cute together – the perfect couple. How wonderful that Reggie has finally found someone whom he seems very happy with. Giselle springs the big question for a couple of teenagers, “am I your girlfriend?” Reggie needs to think about that. 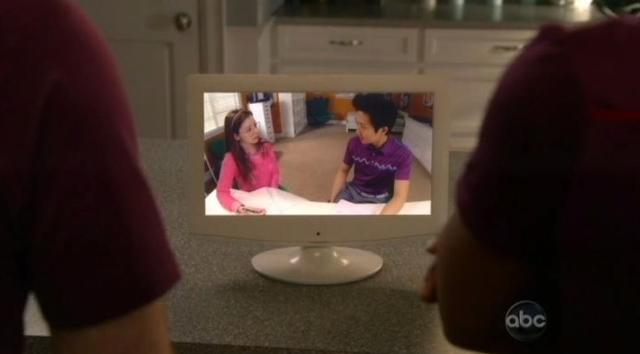 It is time to learn something new about Larry and Jackie. They have eyes all over the community, watching others through cameras in other people’s homes. To be honest, this really bothered me. I assume and hope that Larry and Jackie will eventually be caught at their snooping by Marty and Debbie. 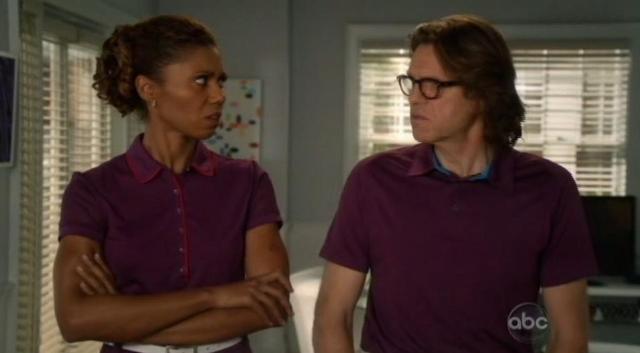 Larry is not as pleased about Reggie’s relationship as Reggie is, and Jackie is upset. The emotion confuses her. Being upset about her son is not pleasant so, time to watch the Weavers. Now, this is something Larry can get into. He says, “oh, yes, I can do with a little schadenfreude”. For those not interested in looking it up, it means taking enjoyment from the troubles of others. Yes, that is Larry in a nutshell. 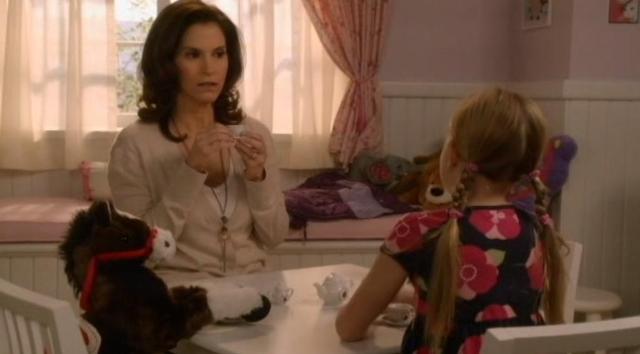 Back at the Weavers, Debbie has to bribe Abby (Isabella Cramp) with chocolate to talk to her. She wants details about Amber. Naturally, she also gets texting shorthand wrong, believing that LMAO means “let my ass out”. And, these people are giving information to the aliens about how to live on Earth? Oh my. 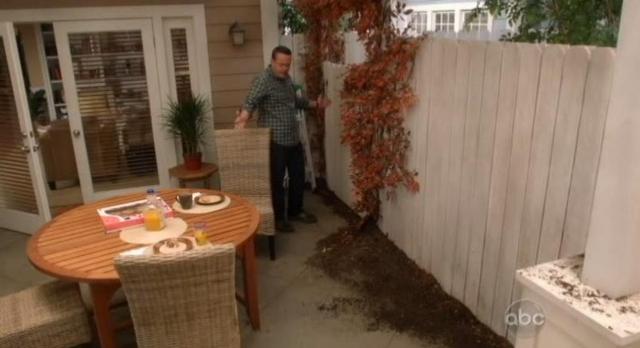 Marty is also chatting to the younger generation about Amber and her relationship with the animated human corpse named Jeremy. Quoting from Game of Thrones, Marty states, “it occurs to me that daughters are the least loyal creatures on Earth, Max”. To expound further, Marty tells Max (Max Charles) that all he can count on is his son and his land. Then he discovers that some of his land is missing. This problem needs an explanation. 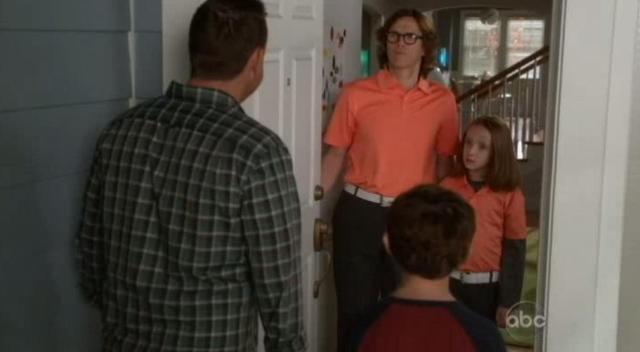 Marty and Max are off to visit the aliens n 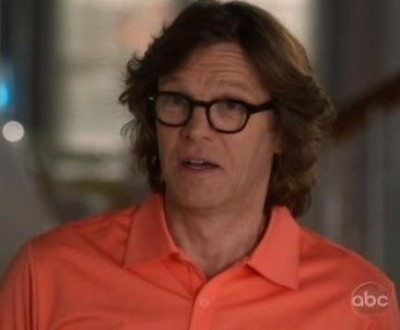 ext door to get an answer. Larry (Simon Templeman) seems pleased. He wondered what Marty would notice first, the fence or that he had keyed Marty’s car. “I guess you’ll want to fight me now”, Larry offers. So, again, Marty needs an explanation.

Larry obliges, “human males are simple. They mask their emotions with drink, farts and physical violence. The drink didn’t take, we’re all out of farts. I moved your fence to provoke you. Fight me, Marty…don’t make me spit in your orange juice”.

Debbie is having an adult to teen conversation with Reggie, who is about the only one who will talk to her. She is insisting on bathrobes and ice cream, however. Debbie, it really is not all about you.

As Debbie goes for the treat, Amber walks in and begins opening up to Reggie. Unable to contain herself, Debbie bursts in on the conversation. My personal opinion is that Debbie needs a slap. Sorry, Debbie. 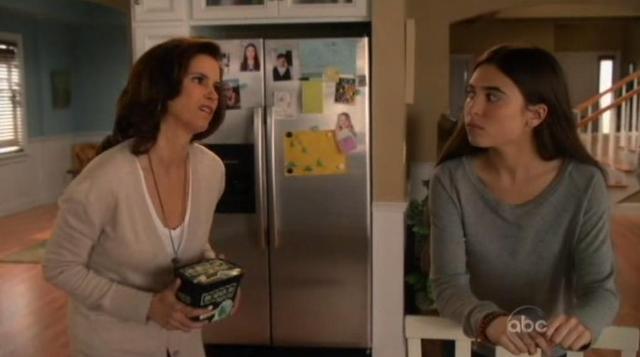 Once Amber has bolted, I mean, left the room, Debbie gets busy giving Reggie Jackson some sage advice. He should commit to his girlfriend and not be like everybody else. Does Debbie ever think things through before she speaks? Probably not. 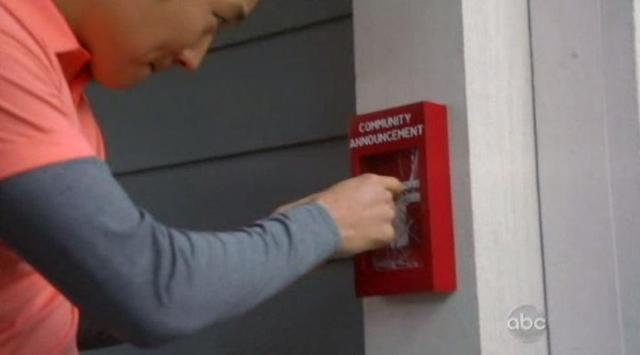 It is pretty cool that the community has an announcement alarm. I wonder what the guidelines would be for using it. Reggie breaks the glass and announces…or, to be more precise, asks, Giselle to marry him. This does not go well for a number of people. 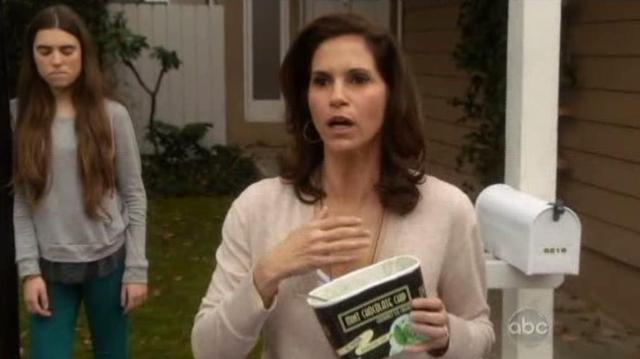 We already know how Larry and Jackie are going to react, but the looks on Debbie and Amber’s faces at the news are very telling. Poor Amber. 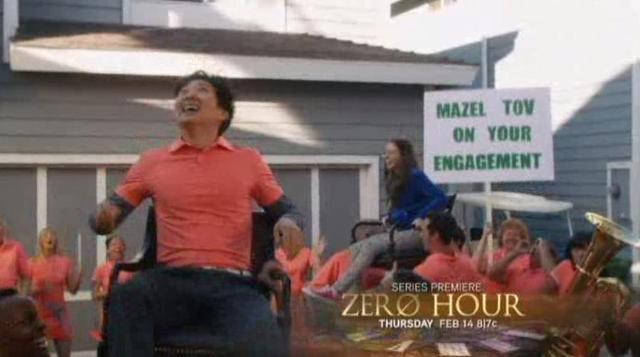 As the community celebrates, Reggie approaches Amber. She tells him what he is doing is insane, but he is not really listening. He explains that, three weeks ago, he loved her, but she did not love him back and that felt horrible.

Giselle, on the other hand, likes him. Who knows when that will happen again. Unfortunately, he does not give Amber a chance to respond. It is his moment, he says, so, it will have to wait. It is amazing how quickly the aliens come up with the signs they like to wave around at virtually every community event. I would love to hear the explanation from Larry about how that is achieved. 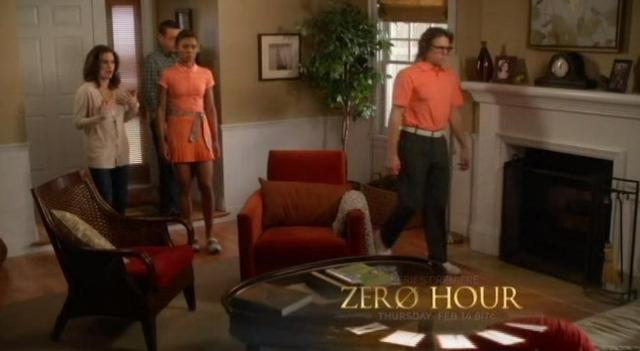 Time for the adult pow wow. Jackie (Toks Olagundoye) is still upset and Larry still wants to fight. Debbie now realizes her mistake with her advice and Marty is still refusing to fight Larry. Yep, everything is fairly normal here. The only advice that Debbie has to offer now is the kind that everyone knows, if you tell two teenagers they cannot do something, they want to do it even more. 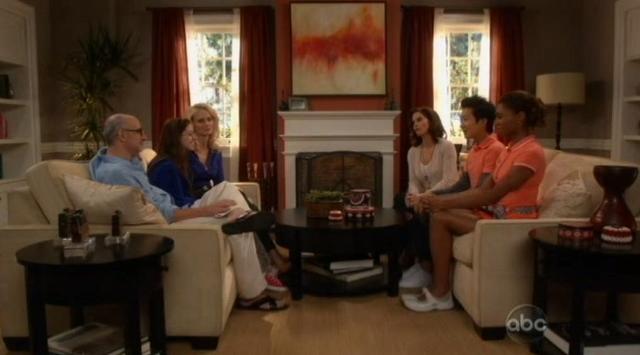 So, Debbie, Jackie and Reggie head to Giselle’s home to discuss things with her parents. Either her parents are also related to numbskull Jeremy, or they know that Reggie’s parents have money, because they seem completely enchanted with the marriage idea.  Obviously, not the response they were expecting. 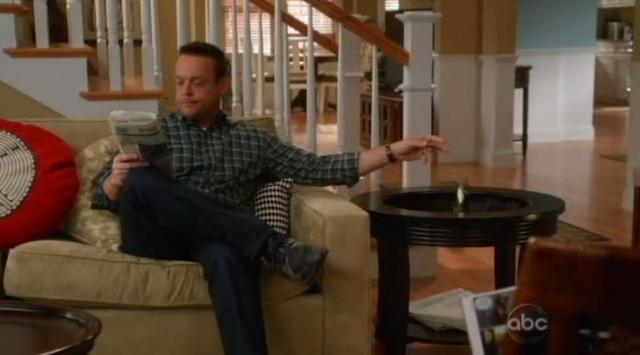 Back at the Weavers, Marty discovers that part of the furniture is missing. Then he gets called out by Larry. As he heads outside, Jackie, Debbie and Reggie return. Since the conversation with the other parents did not go as expected, and it appears as if Jackie and Debbie have reached full boil with their anger, the gang is all here to witness Jackie’s melt down. 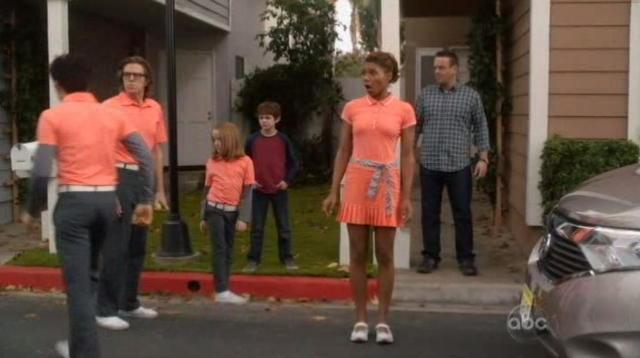 Jackie forbids Reggie from marrying Giselle and sends him to his room, Reggie does not take this well. He heads into the house like a petulant child. 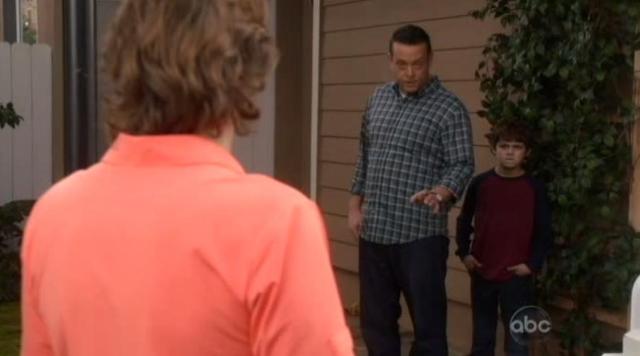 Meanwhile, Larry is still at it, calling Debbie names to get a rise out of Marty. Although Marty is confident that he could easily beat Larry up, it would be interesting to see if this would be true. After all, Larry is an alien. Appearances can be deceiving. Larry manages to cross that invisible line that all men seem to have where they will take so much, and not any more. Marty, seriously annoyed, agrees to the fight. 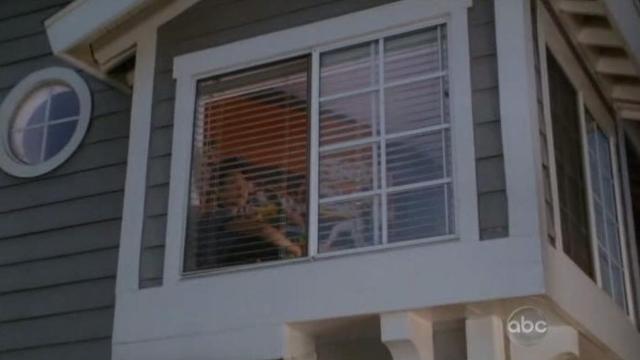 As Reggie languishes in his room, refusing to talk to his mother, Amber endures another long car maintenance monologue from the ever feeble-minded Jeremy.  There is a lesson in this, kids; looks are not everything. 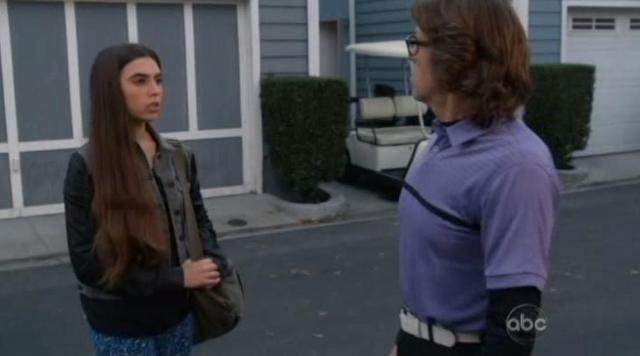 As Amber turns to head into the house, she bumps into Larry. It seems they do not talk much, in fact, never. This gives them both an opportunity to share feelings. Larry is concerned that he is losing Reggie.

Then, as Amber shares her lack of interest in Jeremy, Larry provides some advice, “I don’t think much about humanity, you though, you I have some hope for. You could be something…maybe. But you have to challenge yourself. Find someone who makes you feel special, Amber Weaver”. 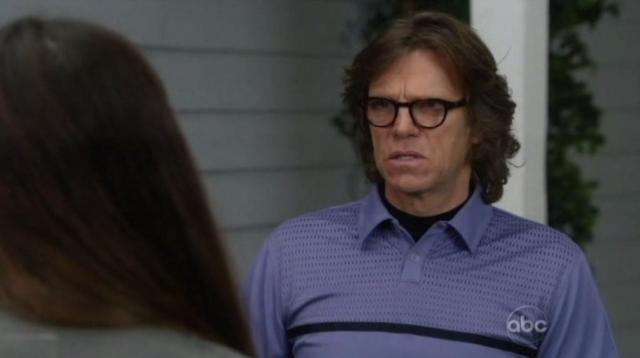 Amber also has some advice for Larry, “you don’t have to fight to be a man. Just, be a man.” Since they do not chat, this will likely be their only ‘blank wall’ talk. 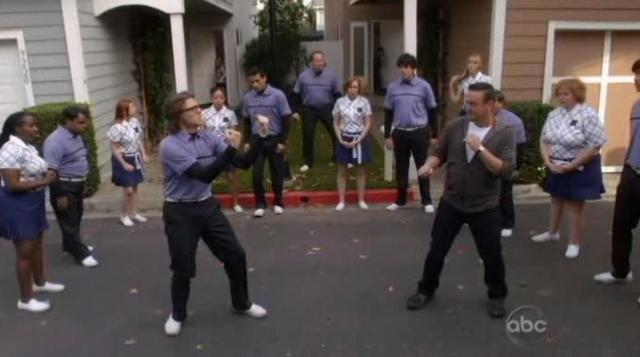 Marty and Max wait for the clock to strike noon, the time arranged for the great fight. Then Marty heads outside where Larry waits. A crowd gathers. It looks as if the gun fight, I mean, the fisticuffs will go forward. 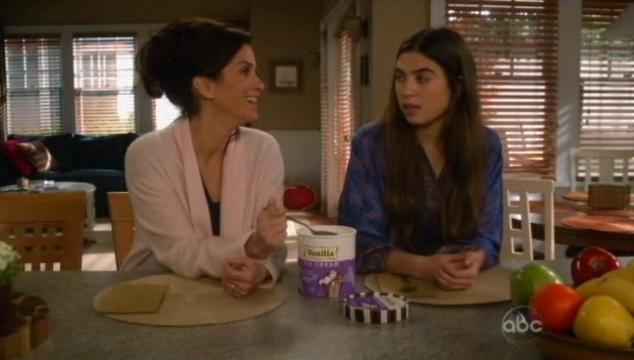 Inside, Amber tells Debbie to get her bathrobe. They are going to talk. Debbie must be absolutely thrilled. The dream of her life is about to take place. There are several rules that Debbie must follow, Amber tells her, “you are allowed to care, but not seem like you care.

You see my face? Make your face look like my face (like you are forever under a cloud of gloom). I need some birth control because I’m going to start having a lot of sex. Are you cool with that?” As a mother, I am now screaming inside. 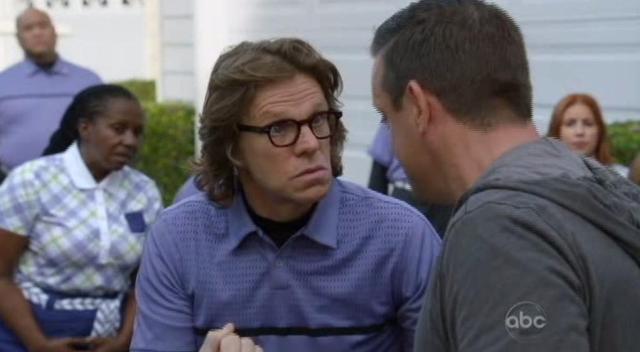 As they are about to exchange punches, Larry admits that he does not really want to fight anymore. He wants to exchange feelings instead, “can we be better than other men?” 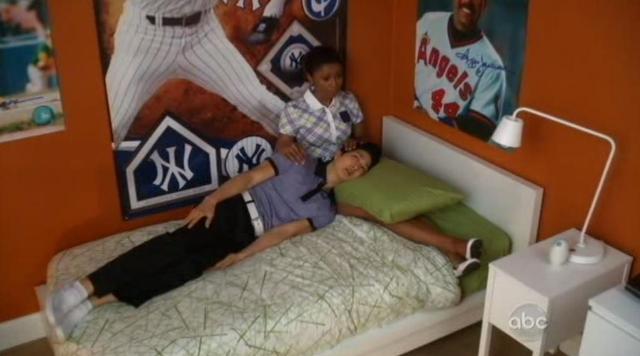 Jackie and Reggie are also mending fences…according to Jackie’s terms. I guess she needs to feel like she can still nurture her children. Jackie admits, “I’m jealous of Giselle. I cannot bear the thought of losing you. Reggie offers that he knows he cannot marry Giselle, but he would like her to be his girlfriend. Jackie can live with that, she says. 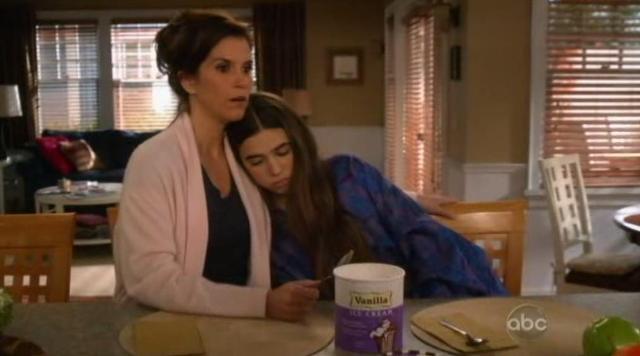 Amber admits that she is breaking up with Jeremy because he bores her. That is the first logical thing she has done since the Halloween-ween episode. Then, Amber does something unexpected. She leans against her mother for comfort. Debbie looks shocked, but delighted. 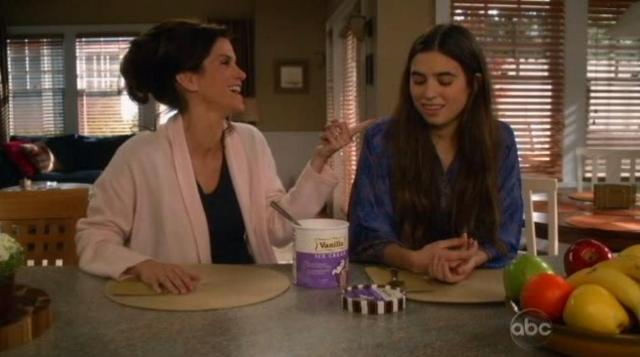 Amber is also developing feelings for Reggie. I foresee more bumps in that road. Of course, Debbie screws that up. She thinks Amber is kidding and starts laughing. Yes, indeed, Debbie, you need a good smack. 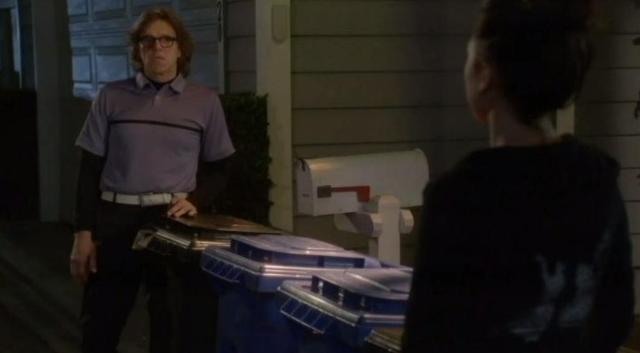 This episode ends with Amber and Larry accidentally meeting while taking out the garbage. Will they have another chat some day? No. As has happened throughout this episode, as he talks to Amber, he gets her name wrong.  Even aliens have poor memories, it seems.

I wonder if there is a danger of the aliens actually turning into humans if they remain in contact with them for too long. Who knows, maybe we are contagious?

RSS feed for this post (comments)
Previous Post
« The Neighbors: “The Back Nine” Why Not Cha Cha Cha as Bad Kids Go To Hell!
Next Post
The Neighbors: I Believe I Can Drive, Or Not, Depending On Who I Am! »
Avatars by Sterling Adventures
The Neighbors Our Alien Zabrvonian Analysis
The Neighbors Theme designed by Team WHR