Dark Matter: She’s One of Them Now In A Wormhole To Admire!

In the pivotal seventh episode of Dark Matter, leading to the much anticipated second half of season two, we are treated to several new aspects of this outstanding science fiction series in an episode wonderfully written by Harley Peyton and delightfully Directed by  Jason Priestley.

The biggest news, as seen in the promotional trailer, was the return of two beloved actors. First up in “She’s One of Them” is Stargate’s David Hewlett as Talbor Calchek, who will assist our heroes obtain the Wormhole technology needed to defeat the corrupt Corporatists plaguing the galaxy. The second returning actor is Kris Holden-Reid of Lost Girl, who returns as Galactic Authority Inspector Kierken. 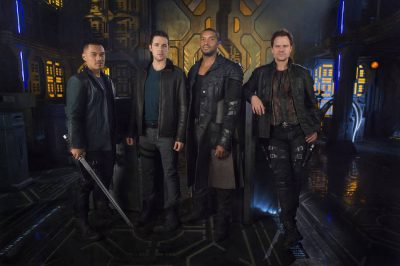 Over and above the outstanding main cast that comprises The Raza crew, by episodes end, we will likely be another crew member character short, this subsequent to the death of One (Marc Bendavid) by the evil murderer Jace Corso.

This sad development will occur when one of the persons who joined the crew after escaping the prison in episode one “Welcome to Your New Home”, will apparently perish at the hands of the suspicious Seer’s, the second group of antagonists currently harassing our Dark Matter heroes. 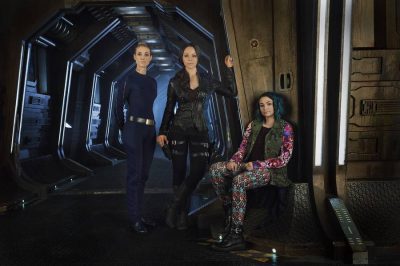 Reynaud is the corrupt corporate elitist operative who is behind much of the trouble being perpetuated in the Dark Matter galaxy in general, and unfortunately for The Raza crew in specific. 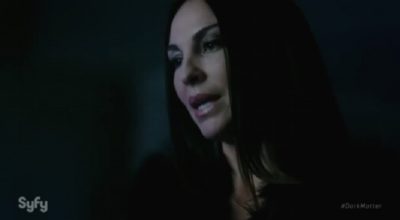 The evil Corporatists in Dark Matter like Alicia Reynaud are much like the corrupt Globalist politicians of our time today who loot the people of planet Earth with confiscatory taxes, leaving poverty in their wake, often leading a life of luxury paid for by bamboozling the citizens of their nations that they will be helped to a better life for themselves and their families. 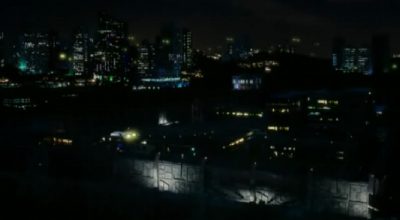 Many in 2016 consider the United Nations, the European Union (EU), and the once respectable United States to be the most flagrant examples of Globalists seeking to enslave the Earth via their questionable vision of a New World Order (NWO). Controlled by Bloviating Bureaucrats in Brussels, New York and Washington D.C., the conspiracy theory is in part about the NWO dictating how people will be allowed to live out their lives. Is it any wonder that England left the EU when their own citizens needed “permission” to fish for food off their own coastline?! 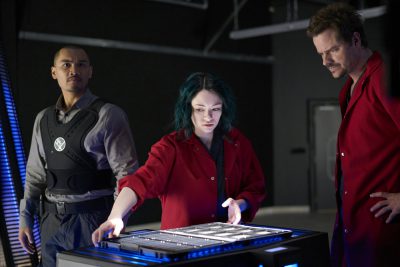 Five shows the Blink Drive tech to Three and Four

Specifically, Five (Jodelle Ferland) has become the owner of the key to the Wormhole technology that our heroes acquired previously from Reynaud. In “She’s One of Them Now”, a new term for a Wormhole, much like the Stargate, is the “Blink Drive” device, which will become a standard science fiction aficionado’s term to define Wormhole travel!

The Wormhole factor is welcomed by Stargate fans in specific, and science fiction admirers in general, all who love the added adventure that a Wormhole based Universe provides! 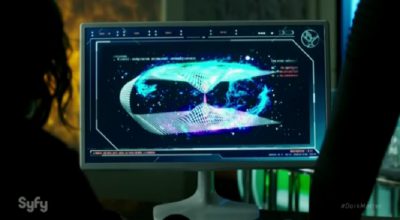 This reviewer is ecstatic to witness the utilization of the “Blink Drive” as our heroes as they battle to defeat the forces of evil and corruption!

The best and most exciting aspect of Wormhole travel, in the opinion of this reviewer, is that such allows the story arc in Dark Matter to range far beyond the capabilities of Faster Than Light (FTL) technology to bring new protagonists, allies, and even bad guys to bear in The Raza Crew’s fight for freedom!

She’s One of Them Now: 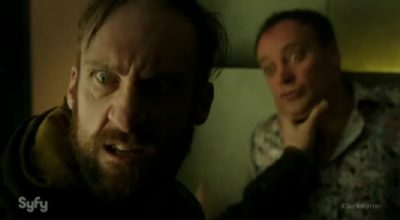 Talbor being choked to death

The episode opens with a scene featuring Tabor Calchek begging for his life from a nasty looking fellow. Talbor in a state of panic, not unlike his Rodney McKay character in Stargate, claims “the funds should have been deposited directly to your account”.

It is quite obvious that Talbor, a bit on the crooked side himself, has planned to cheat or has already robbed the enraged man! 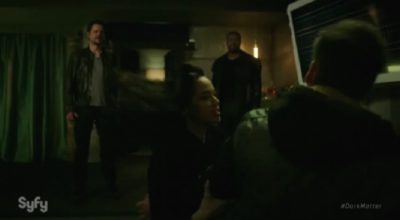 Two kicks ass to save Talbor

As the giant of a man begins choking Talbor, Two (Melissa O’Neil), accompanied by Three (Anthony Lemke) and Six (Roger Cross), come to the rescue before Tabor Calchek has his life extinguished by the man choking him. Two makes short work of the criminal, kicking the hell of him, ultimately saving Talbor’s life! 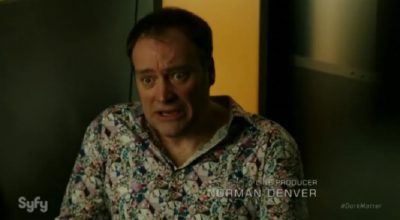 Subsequent to saving Talbor, Two, Three and Six indicate they will forgive him for betraying Alexander Rook (Wil Wheaton) if he provides information on the location of Alicia Reynaud. Talbor informs our heroes that Reynaud never leaves the safety of her heavily guarded fortress. Instead, Reynaud uses clones with a technology known as Transfer Transit, where the mind of the traveler is transferred to a clone shell of their body, protecting the person under transfer from direct harm. 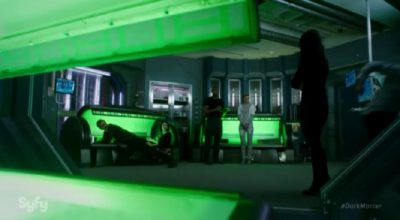 Back on The Raza, Five hacks into Reynaud’s computer system account to be able to locate her original point of departure. The Raza crew has acquired three of the Transfer Transit pods with Three, Four and Five to head up the penetration of Reynaud’s headquarters. The purpose of their mission will be to figure out what the key card is used for. We will learn the key is a one of a kind prototype that activates a Blink Drive when installed on a ship with Faster Than Light capability. 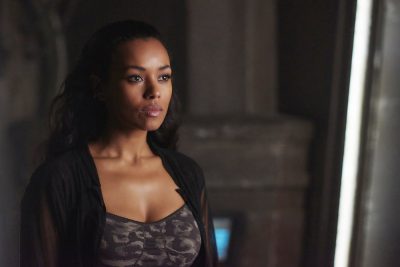 After the loss of her brother Milo (Mpho Koaho) in “We Should Have Seen This Coming”, Nyx (Melanie Liburd) is apparently seeking to escape reality, requesting Devon (Shaun Sipos) provide her with mind numbing drugs.

Devon initially is reluctant to provide Nyx with narcotics, but consents to Nyx’s request because of his own substance abuse problems which we will learn about later in the episode. 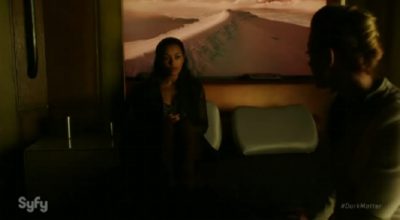 The Android provides guidance to Nyx

Segue to Nyx’s bedroom, The Android pays her a visit provide comfort after her loss of a family member. The Android assures Nyx that she is not the only member of the crew who has suffered loss.

Three, Four (Alex Mallari Jr.) and Five Transfer Transit to Alicia Reynaud’s fortress. It is here that Five confirms that the key card activates a ‘Blink Drive’ attached to an FTL system. Five determines, and then precisely locates the prototype equipment inside Reynaud’s fortress. 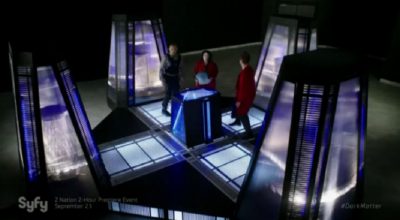 The alarm is triggered

While accessing and stealing the “Blink Drive” Three, Four and Five accidentally set off an alarm and try to high tail it and escape.

Unfortunately, Three and Four are captured. Five is more lucky, She is able to hide with the “Blink Drive” tech.

Things go from bad to worse when Reynaud plans to torture and kill the clones housing Three and Four after extracting information from them! 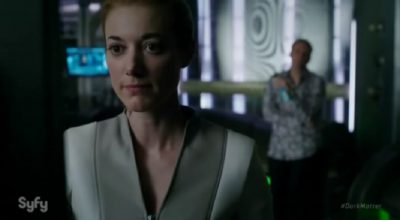 Meanwhile, Tabor is visited by The Android when he claims he is ill from claustrophobia.

The Android sympathizes with Talbor thanks to her recently installed emotion chip tech.

While Talbor is taken to the sick bay, his girlfriend Perelandra (Alli Chung) went to his living quarters on the Space Station and finds him missing. 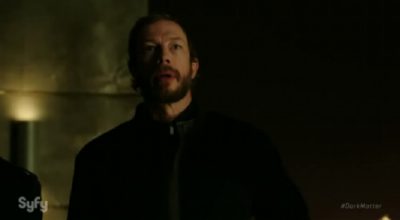 Enter Galactic Authority Inspector Kierken and his team who inspect Talbor’s home. They play back the security camera footage, confirming that Talbor has been abducted by our heroes.

Back on board The Raza, Nyx has decided not to take drugs to escape reality. When she goes to return them to Devon, she finds that Devon has not chosen to do the same. With a whiskey bottle in his hand, Devon is mumbling about wanting to lose his own memories and start over. 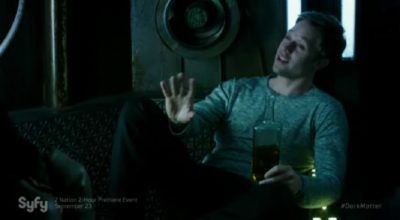 Devon in a drunken stupor

Nyx sincerely inquires about her drunken crew mates past. We learn that Devon, in a drug induced haze, had, in the past, been responsible for the death of a young girl. This is the nightmare that has plagued his entire life ever since.

In the meantime, Reynaud plans to get some information from the clones housing Three and Four. Five arrives to rescue them, however, she is unable to free Three and Four from their bonds. Using her logical mind to avoid having them captured by Reynaud, Five shoots the clones herself. This breaks the link to the real Three and Four aboard The Raza, while she works to develop an escape plan from Reynaud’s fortress. 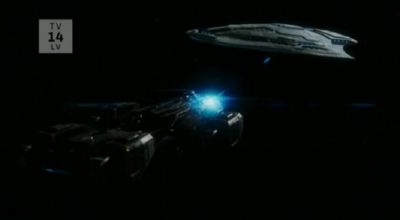 The Raza is hit by the Galactic Authority Cruiser

Reynaud has tracked down The Raza using the signals from Five’s clone Transit Transfer. She sends a warship to destroy The Raza unless they surrender the Key and The “Blink Drive” technology. Two and Six rescue Five with the “Blink Drive” Technology using the Marauder shuttle and return to The Raza, which to FTL in the nick of time.

To avoid any problems, Five’s clone is destroyed allowing the real Five to wake up in the Transfer Transit pod and install the “Blink Drive” technology on The Raza’s FTL. 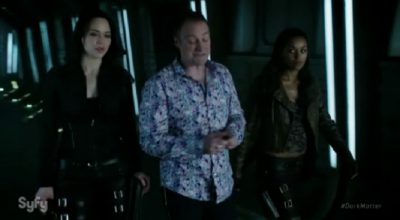 Talbor is escorted to the Space Station

Tabor Calchek is transported to the nearest space station with Devon. Devon needs some personal time to consider what Nyx has shared with him that booze and drugs are not the answer to his problems. Nyx accompanies Devon to support his quest for a clean life.

On The Raza, the crew tests the “Blink Drive”. After The Android activates it, a loud whine is heard for several seconds and The Raza disappears in to the wormhole! 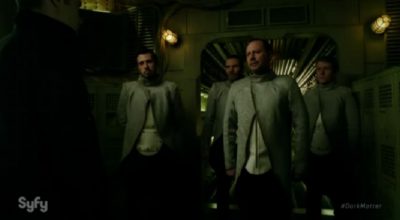 In the final scene, Nyx is observed waiting for Devon in the space stations bar and restaurant. Devon will never arrive.

Seer Hansmeed (Daniel Fathers) and his group of malcontents corner Devon demanding to know where The Raza is currently located. Their intentions are obvious, recapture Nyx, whom they will use like Milo to be better able to predict the future. When Devon refuses to cooperate, Hansmeed’s minions stab Devon leaving him to die.

Did the “Blink Drive” work for our heroes?

Will Nyx will be able to find and save Devon before he dies?

Will Hamseed and his gang find Nyx in the next episode and take her captive once again?

To learn the answers to these questions, and if you desire a third season of Dark Matter, #TeamWHR suggests that we all tune in each week for the remaining season two episodes on Syfy in the USA, the Space Channel in Canada, and Syfy affiliated stations all over the world! Your support, by watching, tweeting live, with supporting comments may be critical to help ensure that Dark Matter is “green lit” for more seasons in the future! Thank you.

RSS feed for this post (comments) · TrackBack URI
Previous Post
« Dark Matter: We Should Have Seen This Coming, But Shadow Pusher Held Us Back!
Next Post
Dark Matter: Stuff To Steal, People To Kill, Alternate People to Mess With! »
Avatars by Sterling Adventures
Dark Matter Delineated
WHR Dark Matter Theme designed by TeamWHR