Totally Chuck’d Out: The Story So Far and Cast Interviews!

With our new WHR reviews of the action-comedy series “Chuck”, recently starting up its third season on NBC, we here at WormholeRiders wanted to give you a little recap of seasons one and two

to get you all up to speed.

I have been watching “Chuck” since it first aired on September 24, 2007 and it quickly became one of my favorite shows on television.  Unfortunately, the first season was cut short to just thirteen episodes due to the writer’s strike, but lucky for us, Chuck was picked up for a second and then, thanks to the “Save Chuck” campaign by the fans, third season! Before we continue, WHR and I announce a brand new series: Very special Chuck season three cast interviews courtesy of NBC Universal!  OMG and YAY!

At the beginning of season one, the main character Charles “Chuck” Bartowski (Zachary Levi) is currently working as part of the Nerd Herd at his local Buy More in Burbank, California.  The job of the Nerd Herd is to help people with their computer problems, kind of like the Geek Squad of Best Buy. 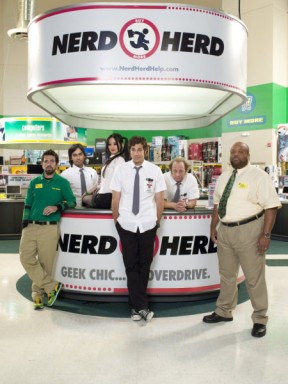 Chuck had been kicked out of Stanford after his roommate and friend, Bryce Larkin (Matthew Bomer), accused him of cheating.  His girlfriend, Jill (Jordana Brewster), left him for Bryce after Chuck was expelled and Chuck still hasn’t gotten over her.  He’s just kind of floating through his life.  He lives with his sister Ellie (Sarah Lancaster) and her boyfriend Devon, aka “Captain Awesome” (Ryan McPartlin), in their apartment.

Unbeknownst to Chuck, Bryce has been working for the Central Intelligence Agency (CIA).  However, Bryce goes “rogue”, steals a copy of the Intersect and then destroys the original.  The Intersect is a computer that contains the government’s entire database of secret information.  It was specifically designed to be able to be downloaded into 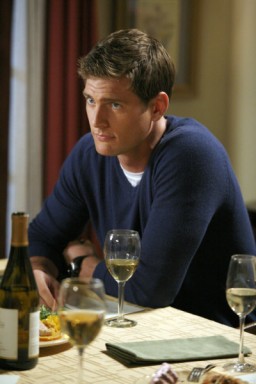 someone’s brain through various encoded pictures.  Bryce is soon captured and killed (or so we think) by someone trying to get their hands on the Intersect, but before he dies he sends the Intersect to Chuck.  Due to his photographic memory, Chuck is able to download the Intersect.  After the download, the information and Chuck’s computer are destroyed, leaving the only viable copy of the Intersect left in Chuck’s head.

Once the National Security Agency (NSA) and the CIA find out that Chuck is now the Intersect, they send spies to protect him and make sure that he doesn’t fall into enemy hands.  The CIA sends Agent Sarah Walker (Yvonne Strahovski) and the NSA sends Major John Casey (Adam Baldwin) who take orders from General 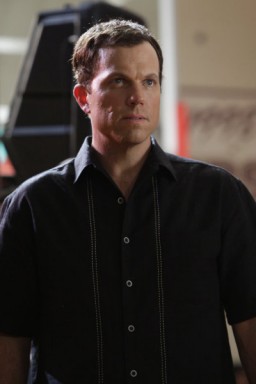 Beckman (Bonita Friedericy).  Because of the Intersect, Chuck has “flashes” of different documents that the government has on the operatives of enemy organizations, namely Fulcrum, and can identify the agents in…  Well, a flash!  This makes Chuck an invaluable source of information to the government and leads the CIA and NSA join forces and use Chuck, sending him on different missions with his handlers, Sarah and Casey, so that he can provide useful intel. 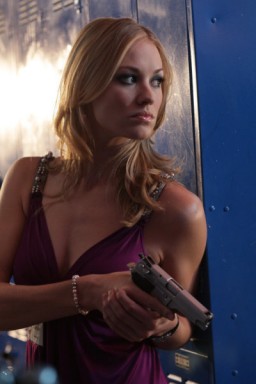 Chuck has to keep his involvement with the government confidential to make sure his family and friends are kept safe.  This forces Sarah and Casey to establish and maintain secret identities in order to protect Chuck from Fulcrum, all the while keeping his identity as the Intersect a secret.  Casey is assigned a cover job at the Buy More and Sarah is assigned to be Chuck’s new girlfriend who works across the street from the store.

The more they work together, the closer Chuck and Sarah become and, over time, start to develop real feelings for one another.  The catch?  Spies are supposed to hide their emotions since emotional attachments are considered a liability in the spy world.  This fo rces Chuck and Sarah to put any feelings they have for each other on hold until they can figure out a way to get the Intersect out of Chuck’s brain.  Chuck says quite a few times that once he is free of the Intersect and no longer working with Sarah, he’d like a shot at a real relationship with her.  Not everything goes according to plan and they have their fair share of problems.  The return of Bryce Larkin (who isn’t dead and turns out to have been Sarah’s old CIA partner and lover) really throws a wrench into Chuck and Sarah’s budding relationship.  Though, ultimately, Sarah, instead of going with Bryce on a new mission, chooses to stay with Chuck. 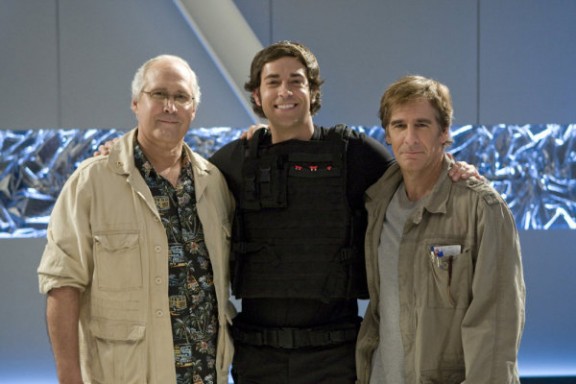 When the government learns that they are unable to recreate the Intersect, they tell Chuck that he is going to have to remain a spy.  However, because of his feelings for Sarah and his desire to have a normal life again, Chuck s 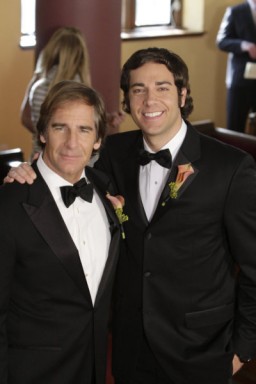 tarts to pursue the man who created the Intersect known by the code name, Orion.  Chuck hides his search from Sarah and Casey since he knows that they would be obligated to report his actions to General Beckman and she had already specifically told him not to investigate Orion.  When Chuck finally makes contact with Orion, he ends up in a dangerous situation and is forced to reveal what he had been doing to Sarah.  She is hurt that he didn’t trust her to begin with, but agrees to help him find Orion and get him to take the Intersect out of Chuck.

Turns out, Chuck had known Orion in the past.  His real identity is Steve Bartowski (Scott Bakula), Chuck’s father who had skipped out on Chuck and Ellie years before and who Chuck has also been trying to track down, not knowing that Orion and his dad are actually the same man.  When his father learned that Chuck had the Intersect in his brain, he came back to try and help him get it out.  While trying to break into a company who had the software necessary to remove the Intersect, Orion is captured by Fulcrum.  In an effort to rescue him, Chuck and Sarah disregard orders to do nothing about the situation and go “rogue”.  They ditch Casey and leave to find Orion on their own.  Casey eventually catches up with them and instead of taking them in, ends up helping them try and rescue Chuck’s dad.

While in custody, Fulcrum forces Orion to build them an Intersect.  He pretends to make them one, but in reality he writes a program designed to remove the Intersect from Chuck.  When Chuck, Sarah, and Casey show up to rescue him, he has Chuck watch the newly encoded pictures.  Contained in those pictures is the overwrite code and once seen, the Intersect is no longer in Chuck’s head.  We think 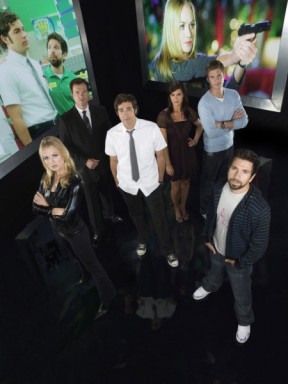 everything is hunky-dory, but when Bryce shows up to get the new and improved Intersect 2.0 from Chuck’s dad, we find out Orion had tested the Intersect on himself and it was downloaded into his mind as well when he flashes on one of the guards that are escorting Bryce.

Knowing that it is a trap, Orion warns Chuck about the situation and Sarah, Casey, and Chuck all take off in an effort to rescue Bryce.  By the time they arrive, Bryce has been shot and is fading quickly.  Chuck is trapped in the new Intersect room and once Bryce dies, he decides to download the new Intersect and destroy the computer in order to keep it safe from Fulcrum.  He barely manages to finish before Fulcrum agents (who have captured Sarah and Casey) finally gain access to the room.  When the agents realize that Chuck is once again the Intersect, they start to surround him.  Chuck flashes and you realize very quickly that this is not an ordinary flash.  The upgraded Intersect 2.0 contains new information.  Chuck flashes and in an instant knows how to take out all of the agents.  He quickly dispatches with the Fulcrum agents and the season ends with Chuck looking very shocked at Sarah and Casey and saying (in a very Matrix type way), “Guys, I know Kung Fu.”

And now you are caught up on the major revelations of “Chuck” of seasons one and two.  Of course, this short recap can

’t explain every detail, every instance of witty banter, or every hilarious plight Chuck gets himself into, so I highly recommend you all pick up seasons one and two of “Chuck” that are available on DVD and watch them for yourselves.  I’m sure you will enjoy the world of nerdy espionage as much as I do!  And be sure to tune into the third season which is currently airing on Mondays on NBC.  Check your local listings for times and I will be back with more special cast interviews soon thanks to NBC!