Eureka: Ex-Machina “The Virtual Return of Holly Marten to Fargo!”

The episode begins with Jo Lupo (Erica Cerra) working overtime to ensure that Holly Marten’s (Felicia Day) funeral/memorial goes off without a hitch. After all, this ceremony is for Fargo (Neil Grayston), who has gone through so much lately.

This well written Eureka moment is quite intense, a very tender touching sentiment coming from the always hard as nails Jo Lupo.

Hang on a bit longer folks, much more in the way in Eureka intensity is coming up in this outstanding seventh episode of Eureka! 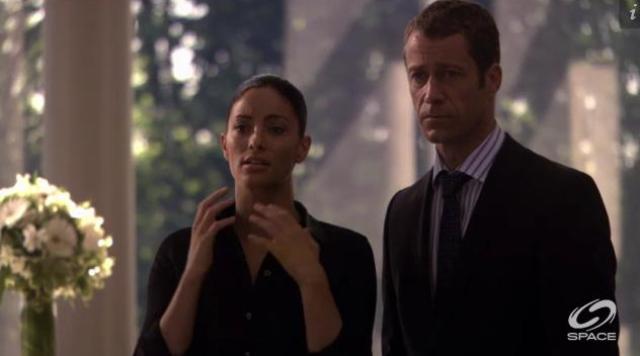 Before continuing my review of “Ex-Machina, we include below, courtesy of Syfy, the promotional trailers for the next great Eureka episode “In Too Deep” for your enjoyment.

As Carter (Colin Ferguson) listens to Lupo rant, he notices that there is work going on nearby. The Department of Defense has sent some military personnel to remove the computer components of the Nexus; the system that sent the Eureka crew into the alternate world.  Major William Shaw (Roger Cross) is in the process of installing Global Dynamic’s new security system before he begins dismantling the other system. 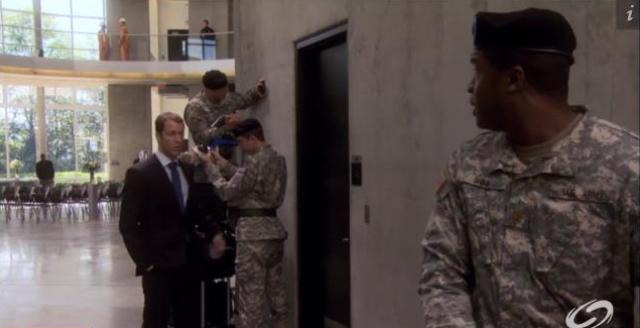 Meanwhile, Allison Blake (Salli Richardson-Whitfield) arrives to check on Fargo as he gets ready for the event. Oddly to Allison, he is very unconcerned and preoccupied. It seems that Jo and Allison are far more solicitous of Fargo than is necessary. Fargo, attempting to keep his secret rendezvous with Holly secret, is rapidly blowing his cover. 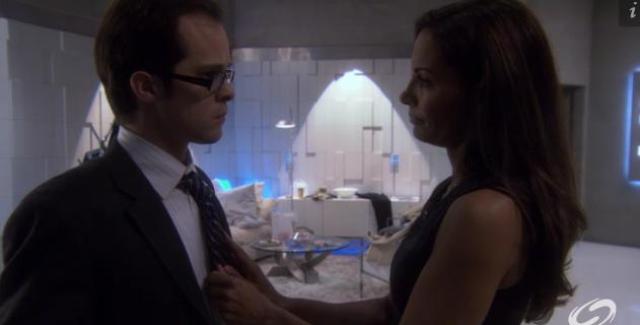 During the memorial, conducted by Henry Deacon (Joe Morton), a large “Mesospheric laser sodium beacon” is unveiled in Holly’s honour. Carter simplifies things as he always does by calling it a “big laser pointer”. They conclude the service with Holly’s favorite song, “Car Wash” by Rose Royce. At least it has a snappy tune. 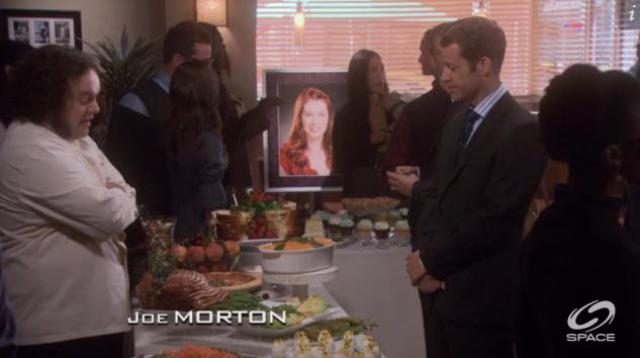 Later, at Cafe Diem, Vincent (Christopher Gauthier) is serving all of Holly’s favourite foods, which, minus the fancy names that Vincent gives them, turn out to be macaroni and cheese and peanut butter and jelly sandwiches.

Jo and Zane (Niall Matter) share a booth at Cafe Diem. Jo is still concerned about Fargo, who she says is sleeping in his office. Zane tried to reassure her, knowing he cannot share Fargo’s secret with his girlfriend. Major Shaw enters. He is unable to find Fargo.

We know where Fargo is. He is visiting with Holly in the virtual world of Eureka, explaining to her why he was not all broken up at her funeral. Worse still, she is not happy that she now has a laser pointer named after her. Holly imagined greater. 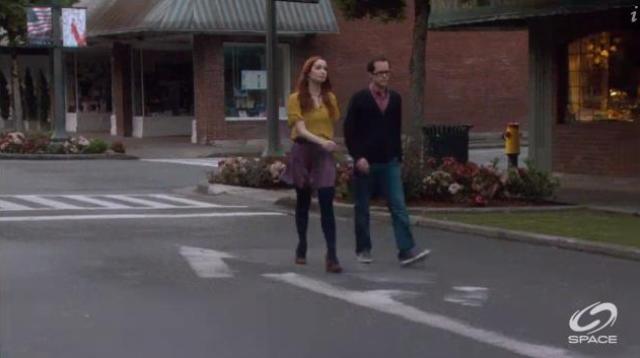 Unfortunately, Fargo gets yanked back to reality by Zane, who arrives in the nick of time to save him from being caught socializing where he is not supposed to be. Allison, Jo and our grumpy Major Shaw have arrived. With a quick save by Zane, thanking Fargo for unlocking the lab, the major takes possession of the Nexus equipment. 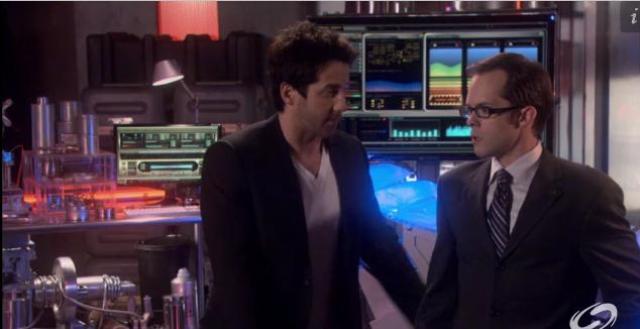 It is not that everyone gives up on Holly. Zane does his level best to stick by Fargo, going so far as to say to Major Shaw, “Back off jack-boots, if anyone takes the processor apart, it’s gonna be me.”

With things falling apart, and Fargo now unsure of who is actually in his corner where Holly is concerned, he decides to come clean and tell Allison and Jo that Holly is still alive. 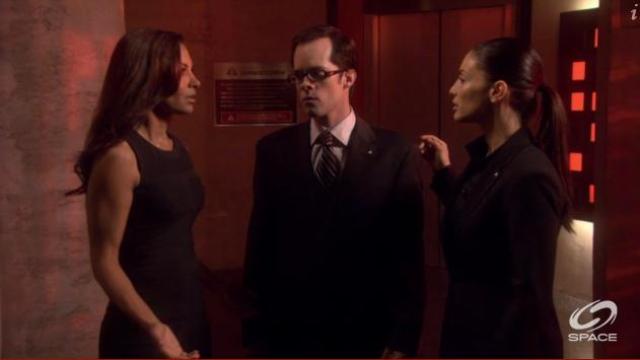 Meanwhile, Carter is helping Henry learn more about the Z-waves by being his “Lab rat”. Henry has Carter mentally move some balls in three tubes to use as a baseline. The way Henry describes it, we all have Alpha waves, which is what makes moving artificial limbs possible. Then he positions Carter against a wall with a gun pointed at him. This is to motivate Carter to perform. Carter is not pleased.

Back in the lab, while Zane is attempting to explain to Jo his part in everything, he is doing his best to download Holly into the GD systems. Again, this happens just in time. The major arrives to take possession of all the computer systems. 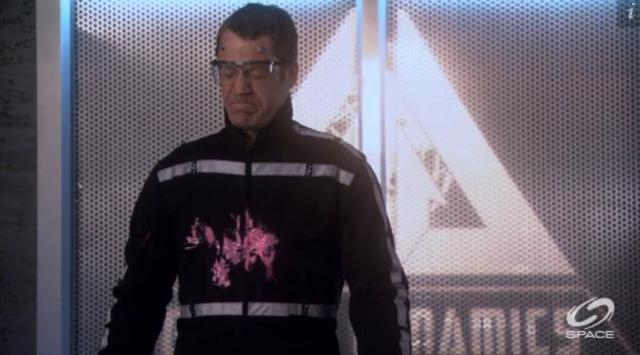 Zane departs and Jo asks about the new security system. It not only covers all the areas of GD, but it also sends the information back to the D.O.D.  Oh, yay. That ought to keep all the scientists on their toes and out of trouble; not.

Back at the main lab that seems to be used for everything, Zane discovers that Holly did not get downloaded onto GD’s systems and must still be on the main processor that Major Shaw now has. And, elsewhere, Henry is showing off another device that he says is on Shaw’s list for warehousing. It is a large mechanical arm, a frictionless grapheme servo. As Carter looks at the machine through the window, it begins to mimic his every move. It seems that the Z-waves are coming to the surface. That is, until the system develops a mind of its own and begins attacking the glass with its metal fist. Fortunately, it does no more damage than to scare Henry and Carter. 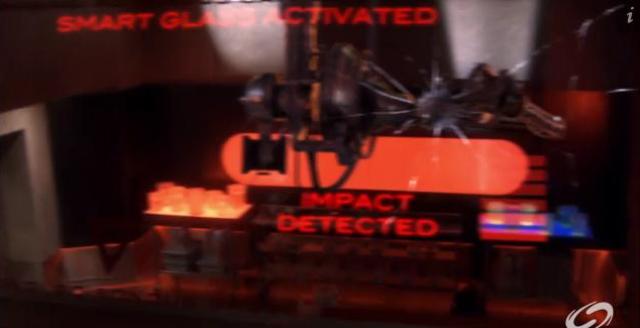 Allison and Fargo are having a heart to heart in another familiar area that has been used in episodes from years past. It is actually nice to see backdrops from long gone episodes of Eureka. Anyway, Fargo is concerned that Holly has been lost forever. Zane arrives to tell Fargo that the DOD has the hard drive in a secure area. They are going to wipe the hard drive. 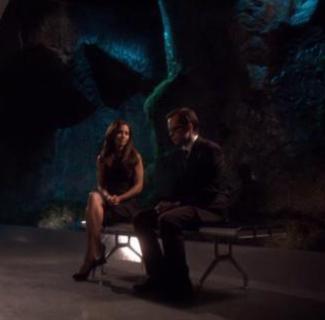 As PANOP goes live, Jo is suitably impressed. However, with it functioning, Fargo can not get to the Main Frame to rescue Holly. That is where Zane comes in. He does his best to hack the system so that Fargo can break into the system. He is only successful for a short period of time. Fargo gets caught. But not before he hears what he perceives to be whispering and after he has discovered that the main frame is empty. 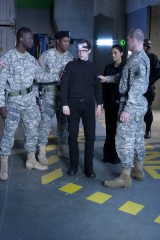 Later, with Fargo locked up in Jo’s personal cell, Carter comes by. He is concerned that Fargo has been arrested.

As Jo explains about odd occurrences happening throughout GD such as doors opening and closing by themselves, Carter realizes that the odd happenings are not because of him, but because of something else.

Carter finds Henry working in the lab where the episode began. The big laser pointer sits nearby. Jack tells Henry about his suspicions, blaming the strange activities on the security system nodes installed by the DOD. As he speaks though, the laser system becomes active.

Henry and Carter only escape when the laser shuts down. Independently Henry and Carter, and Jo and Fargo realize that Holly is the one responsible for all the weird stuff happening at GD. They all meet on the second floor of the lab and see that they are right. Holly is trying to communicate. 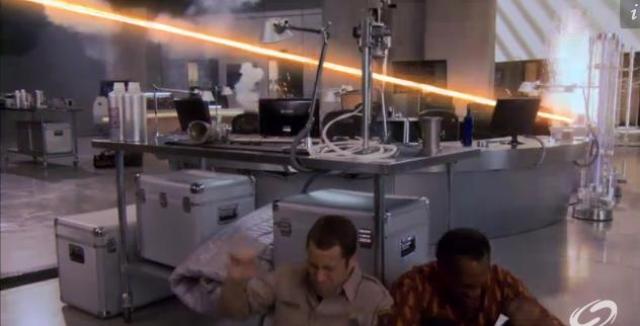 The major is busy too. Despite Zane’s efforts, the major has set off a computer virus that is now chasing Holly through the computer systems of GD.  Zane, ever the clever one, hacks a safe course through the systems of GD for Holly to follow. Not to be outdone, Henry creates a memory lattice. Now, I think they are just making up terms. There is so much technobabble in this episode, Carter is not the only one trying to keep up. 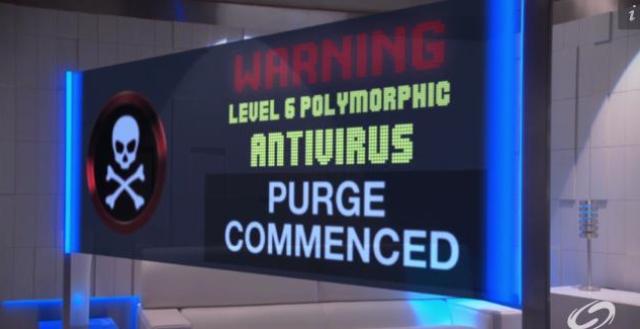 Carter and Fargo end up back in the Big laser pointer lab yet again, with the laser about to go critical. She sends them a message to run.  But, despite their efforts the lattice is destroyed. It looks as though they were not able to save Holly. To cap it off, now Jo gets arrested for letting Fargo out of jail. Zane comes down to Jo’s office to visit her in her own cell.

Fortunately for Jo, Zane has managed to make it look like the major’s “balls” were responsible for all the damage. He is ordered by the DOD to take his, “balls and go home”, and to let Jo out of confinement. Major Shaw also tells Jo that he is taking the mainframe with him. 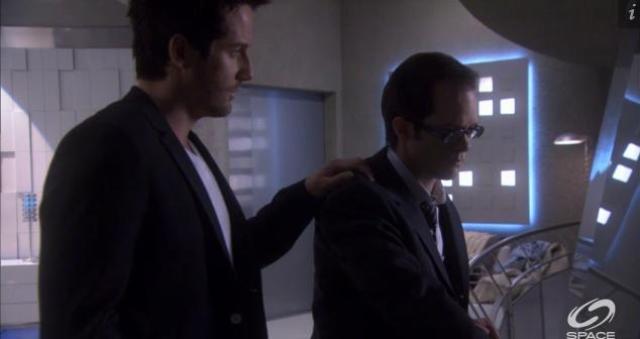 Later, Zane catches up to Fargo who is in the process of cleaning up his office. Zane asks him, “What do you need, a beer, a hug?’ Unfortunately, Fargo states, the only thing that will help is time. Holly sacrificed herself for him, for everyone.

Or did she? With Henry’s help, and a quick trip to Carter’s house, Fargo discovers that Holly is now sharing the computer system with S.A.R.A.H. who seems quite happy about the new company.  Holly admits, “this is going to be weird.” Fargo replies, “As long as I have you, I don’t care.” 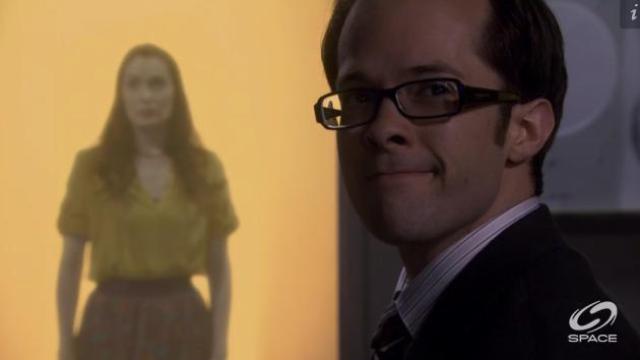 Carter got a real work-out running all over GD. This episode also centered on Fargo more then it did on Carter. Neil Grayston should definitely be proud of his work on this episode. As usual, he shows lots of range in his character. 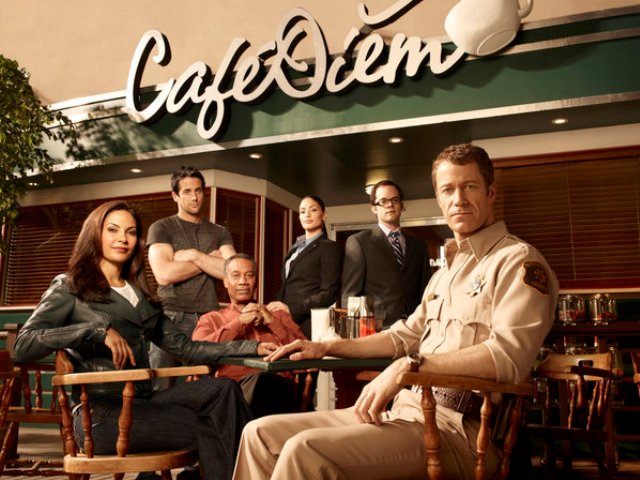 Thanks to Kenn for assisting with the Syfy video embeds for this Eureka review. And thanks to you for stopping by WormholeRiders News Agency!