Welcome back for the first of our final three analysis of the fourth season of Discover Haven!

Thanks Discover Haven team in general, with specific kudos to Nick Parker for writing “Shot in the Dark”, and to Mairzee Almas for directing this superbly frightening (translate; enjoyable) episode! 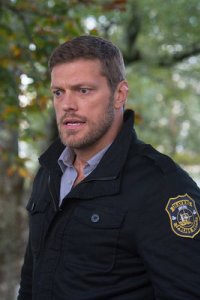 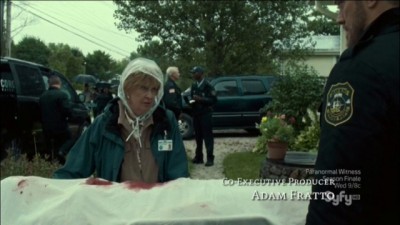 Just as enjoyable has been the newcomer to the saga in season four, veteran actress Jayne Eastwood who portrays  Gloria the Police Medical Examiner in town. This reviewer has no doubt that the back story to Gloria is yet to be revealed!

This gifted actress has delighted this reviewer and all the admirers of the series each week to no end with her sarcastic rendition of various facts pertaining to victims of “The Troubles”! 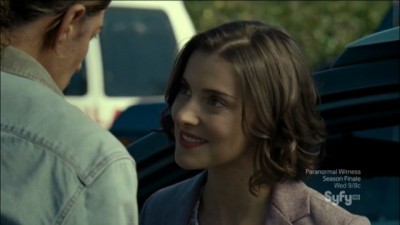 The movement of the story arc during the season has been a joy to behold. The addition of Emma Lahana as Jennifer, lover of Duke, a person originally exiled to Boston by minions of Agent Howard (Maurice Dean Wint), likely under orders of the nefarious William (Colin Ferguson) in the first episode was brilliant!

Although sad, even the death of key characters including Jordan McKee (Kate Kelton) and Wade Crocker (Christian Camargo) added to the Single Effect of each episode to bring viewers to where we are today, with a “Rougarou”, or a legendary heart flesh eating creature linked to European notions about a rabid werewolf that is determined to literally eat Jennifer’s heart!

Shot in the Dark: 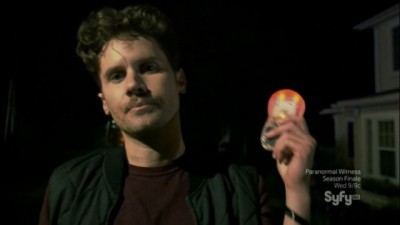 The episode opens with two previously unknown characters filming in front of a residence discussing the odd happenings in Haven Maine. They are carrying strange detection equipment and filming surreptitiously. During the opening sequence, we hear two voices, but only see one person on camera.

Specifically, the two characters are in Haven to investigate a murder, that of a person whose heart has been ripped out of their torso. At this point we do not know how these two characters discovered Haven, but it is sufficient to know that they ARE the fabled Darkside Seekers! 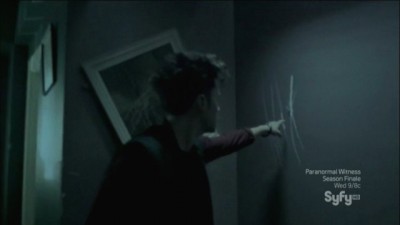 A loud noise like someone smashing stuff up (a Rougarou, more on that in a moment) is heard emanating from a nearby residence.

As the pair of paranormal investigators seek to find the source of the noise, they find scratches on the wall and then a dead woman whose heart has literally been eaten from the outside in!

Suddenly, and frankly quite alarmingly in a delightfully scary scene, a monster flashes by and quickly exits out the door that has already had its hinges ripped off! 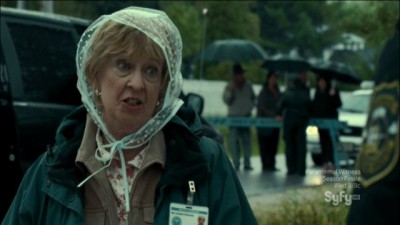 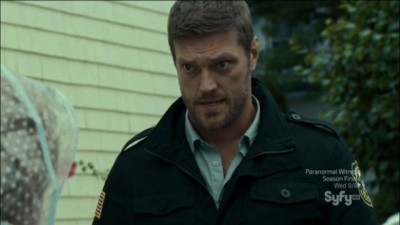 The action moves to the next morning when Dwight is being briefed by Gloria about the gruesome events of the previous evening.

The victim, the second in a few days, was a local schoolteacher named Abby Banks portrayed by an unnamed actress.

As Abby is being wheeled away on a gurney, removing the heartless soul from the crime scene, we know without doubt that yet more of “The Troubles” have been set loose on the hapless town, and that crazed obsessed William must somehow be involved! 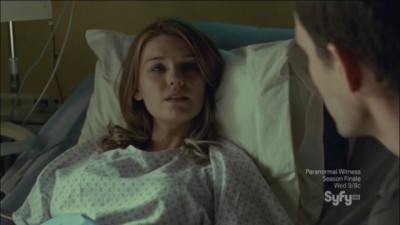 Next we find ourselves with Nathan at the Haven hospital. As we may recall, Nathan had shot William in the previous episode only to have a “sympathetic wound” mysteriously appear on Audrey’s body in the exact same location simultaneously.

We do not know how this is possible, however the incident proved that nefariously obsessed William of the Wormhole Bar Barn had been telling at least a partial truth; that he and Audrey are mentally, spiritually and somehow physically connected to the point of great danger that could spell doom for both parties. 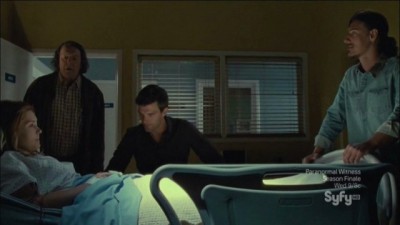 Naturally, Nathan is ravaged by guilt for what has happened to Audrey after he shot William. So too are Duke and Vince Teagues highly distraught over the developments. he faithfully waits by her hospital bed praying for her recovery when Duke and Vince arrive to ascertain her condition.

In a nearby hospital room, William is also unconscious. He has been placed under round the clock surveillance so that answers can be extracted from him when, and if, he awakes.

The circumstances are such that when William had been confronted in the alternate universe in the previous episode, all were at a loss to explain the physical connection that caused a gunshot wound to appear on Audrey. 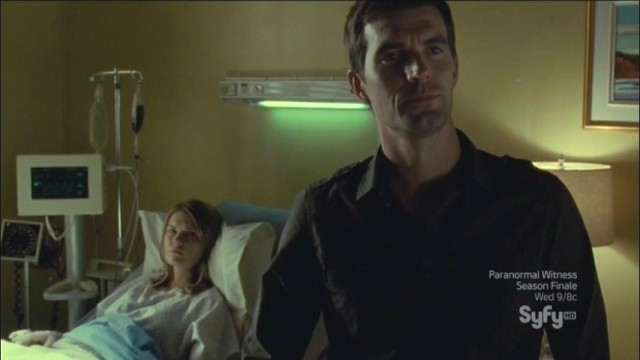 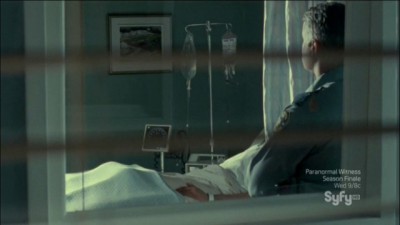 Therefore, waiting for William to become conscious may provide insight. This is apparently the only hope for Audrey to fully recover, or so our heroes think! William, a brilliantly created character, has proven to be a bit duplicitous during the entire season.

This reviewer suspected that he had healing powers associated with his other reality life and that he would somehow escape the hospital and continue his crazed mission to force Audrey to become his lover as she had been in another life or parallel Haven wormhole universe. 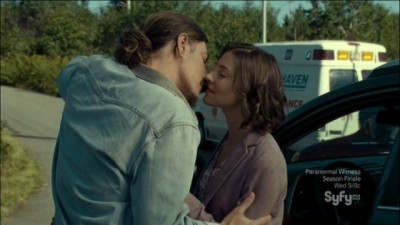 Sure enough, this is precisely what will transpire, but not before Jennifer and Duke share a kiss to illustrate their love.

Moreover, a new element is added to the Haven story arc in “Shot in the Dark” that will help establish the foundation for the exciting two episode season finale “When The Bough Breaks” that aired December 06, 2013, and “The Lighthouse” that is airing this Friday December 13, 2013! 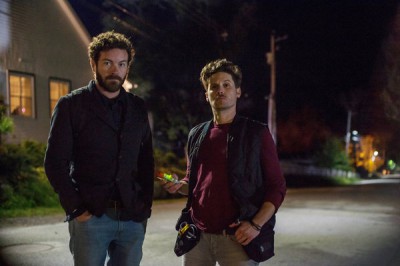 All season long fans on Twitter have followed a new account called the Darkside Seekers. Only one week before the airing was the general public informed that Danny Masterson would portray Anderson Harris, and that Kris Lemche would portray Seth Byrne, both of whom would comprise a two person team of paranormal investigators called the “Darkside Seekers” seeking a sensational supernatural story in Haven!

This scene is played out brilliantly in the opening moments when the two paranormal fellow find a whole lot more than they bargained for, including learning about “The Troubles”!

The Darkside Seekers are independent paranormal event hunters, a combination takeoff (satire) on recent popular series such as Paranormal Witness, Destination Truth, Ghost Hunters, In Search Of (in the 1970’s and 1980’s), and even as far back as the 1950’s, when an original groundbreaking series, One Step Beyond (1959-1961) began the genre. Literally dozens of similar programs have been fan favorites over the past 60 years of television entertainment! 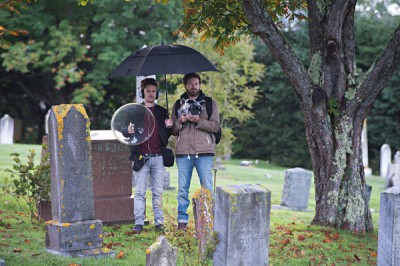 Also of interest in the opinion of this reviewer, is that the Darkside Seekers could be a spin-off series, and or, perhaps a main element of a fifth season of Haven much as “The Guard” were in season three and four of the series.

What makes the inclusion of The Darkside Seekers in the haven series enjoyable is the manner in which fun is poked at the “Paranormal Television” genre, including threats from Dwight and Duke to smash their cameras and equipment unless they cooperated as well as a Wikileaks reference!

While staged in a cemetery with sound capturing equipment, the Darkside Seekers scour the streets of Haven for clues about the unusual happenings in the town related to what have been reported as “The Troubles” 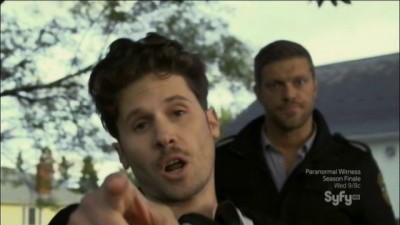 Later, the two paranormal investigators capture footage awaiting the arrival of the Haven police after calling them as a set up to get more clues.

Trustworthy Dwight notices the two outsiders “beaming” the environment with sound capturing equipment and threatens them to scare them off.

The Darkside Seekers are undeterred and have some experience from their world-wide travels with the beast who apparently has a hunger for live human hearts! Portrayed by Dan White, this actor does an awesome job scaring the hell out of everyone, including this reviewer! 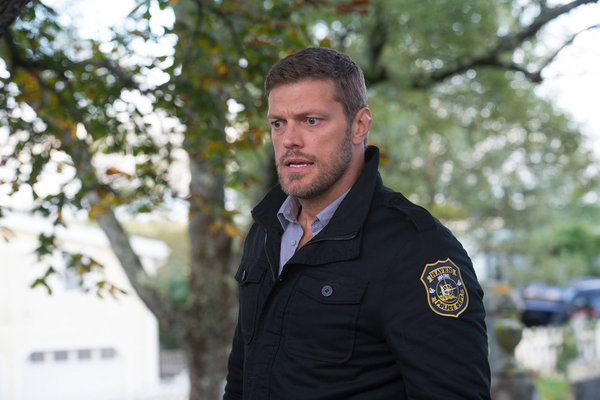 During the course of the episode, the Rougarou is captured on memory chips that “taped” the creature. Supposedly encrypted, the “film” mysteriously erases or is digitized, making it worthless. This occurs subsequent to the escape of William from the hospital, who has somehow recovered very quickly from his gunshot wound! 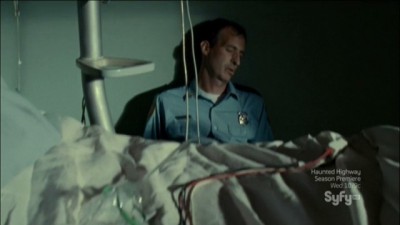 Segue back to the hospital; Nathan, Duke and Dwight are all stunned to discover subsequent to Williams escape when Stan the Cop is knocked out, that Audrey has also recovered as if by a miracle! We observe that her skin is smooth, no wound, not even a scratch. This further edifies that there is a physical connection between her and William the obsessed alternate universe traveler!

In the next segments, the Rougarou takes another victim witnessed by Duke, Nathan and the Darkside Seekers. Another heart has been horrifically ripped out by the ravenous werewolf like creature!

As mentioned, although the Darkside Seekers captured the video footage on their camera, which they play to prove they caught the vile creature, later the images are digitized only leaving shots of the “flower” black jelly like substance that William uses to create The Troubles whenever he desires. 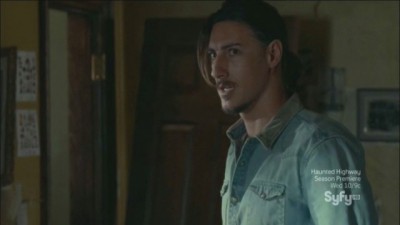 It becomes obvious that William has control over the Rougarou, but for what purpose? The investigation reveals that the Rougarou is seeking victims with the same birthday! And guess what? Jennifer also shares this same day indicating that she is the intended victim because of her ability to hear inside the Wormhole bar barn which helped Audrey escape when she was Lexie Dewitt.

Duke panics and rushes to locate Jennifer at her office inside the Haven Herald. He is too late, the entire place has been ransacked! The look on Duke face tell the story; he is worried that she has become the latest victim of the heart eating Rougarou! 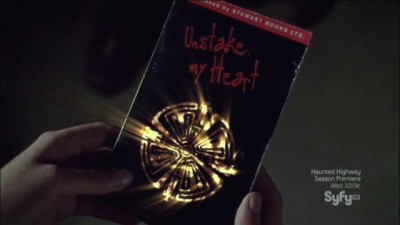 While the Rougarou did break in to the office, Jennifer was able to escape with her life. A cell phone call locates her. Jennifer is safe in a nearby warehouse. Subsequent to their video being erased the Darkside Seekers joining our Haven heroes to get to the bottom of the mystery and of course document the story for the outside world!.

Jennifer is found. It is determined that she has the exact opposite power emanation as the Rougarou! As the episode winds down, we see a holographic image on a book that William and the Rougarou want; a book that was once owned by Audrey. As the Rougarou attacks, the team work together to fend it off. However, it is Jennifer using her power as she goes to retrieve the holographic book who saves them all. 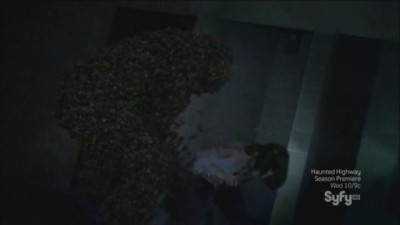 The Rougarou dissipates into thin air that looks exactly like the black flower petals that William has used previously to create a plague of The Troubles in Haven.

What we do not know is what the book represents. Jennifer observes that only she can visualize the words and symbols in the book.

Even though the book once belonged to Audrey, she is unable to decode them and Jennifer saved them all. This fits nicely with my our earlier analysis that Jennifer was deliberately taken from the area because of her supernatural powers. 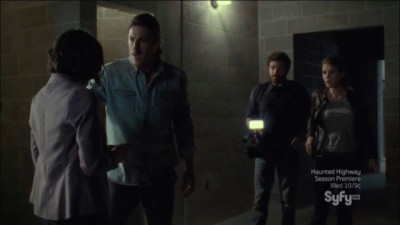 The episode ends with a starling fact about why Jennifer was banished from Haven by Agent Howard. Jennifer has a mythical power that can likely be utilized to save the poor town from nefarious William and his plan to capture the alternate version of Audrey he is completely obsessed with.

Once again, this editor gives a “A PLUS” to another superb Haven episode. “Shot in the Dark” has eloquently established the foundation that will become the edifice of the two episode season four finale which will unravel the enigmatic William and his dubious agenda! BRAVO!