Welcome back WormholeRiders and those concerned about the Killjoys!

Dav has rejoined the Killjoys team in “Wild, Wild Westerley” to fight for justice against the crimes against civilization that have been perpetrated by The Company and to restore the honor of The RAC in The Quad destroyed by the miscreant, power mad politicians and corrupt corporate interests of The Company! 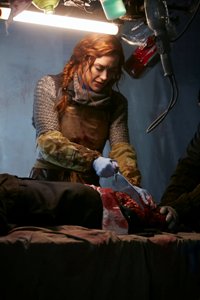 Series creator Michelle Lovretta deserves great applause, respect, and admiration for her awesome efforts in Killjoys in both seasons one and two.

As we discussed in our previous analysis, Michelle Lovretta has brought sheer joy to many millions of entertainment fans in Killjoys and with her outstanding past achievements in Lost Girl, The Secret Circle, and Instant Star!

Gifted creator Martin Wood, to the absolute delight of his admirers the world over, now brings his considerable talent to Killjoys in an episode that will peel back the onion regarding the overzealous corruption that is threatening the freedom and liberty of all citizens in The Quad!

Thank you Mr. Wood and Michelle Lovretta for a fabulous episode!

In the opening “previously on Killjoys” we get a look back on what has happened, where we are going, the seeming murder of Turin and we are treated to a hug and kiss between Dutch (Hannah John-Kamen) and D’avin Luke Macfarlane who are very happy to see each other again!

Now that Dav has been saved from being converted to a Level 6 operative like Fancy Lee, our heroes get down to business. The first scene finds Lucy (Tamsen McDonough) setting course for their next destination, Old Town via a stop at The RAC to get D’avin reinstated by what is left of the organization subsequent to the booming of Old Town.

Dutch is observed looking in a mirror at herself when the reflection appears to come to life. No doubt Dutch is considering what Dav told about the visions he had of her killing Scarbacks on Arkyn.

The moment of reflection ends when Dav enters her room to make sure she is alright. They discuss what he saw with Dutch asking how he was sure it was her since she had never been on Arkyn to the best of her knowledge. Dav says she has a good face and is sure of what he saw.

Lucy arrives at The RAC space battleship. Our three heroes, Dutch, D’avin and Johnny (Aaron Ashmore) are waiting patiently in a conference room when they are stunned to see Turin (Patrick Garrow) walk in the room!

Believed to be killed by Khylen (Rob Stewart), D’avin immediately and literally jumps on Turin over his past behavior.  Dav gives Turin a good ass kicking!

One of the great aspects of Killjoys are the well choreographed fight sequences.

Things settle down after Turin explains what transpired and how he survived being nearly gutted by Khylen. A bit grouchy about helping, Turin nevertheless issues the Killjoys an outstanding warrant to return eight escaped prisoners to Westerley.

In reality, the use of the warrant is a pretext to gain entrance to Old Town to rescue Alvis (Morgan Kelly) and Doctor Pawter Simms (Sarah Power) who have been trapped inside a force field fence surrounding the city since the bombing by The Company.

Now that Davin has been reinstated as a member of the Killjoy, our heroes return to the ruins of Old Town under the cover of the escaped convicts warrant.  Dutch, Johnny and Dutch, Johnny, D’avin and Pree (Thom Allison) arrive at the walls around Old Town. Unfortunately they are immediately captured by Company official Jelco. Jelco is the administrator of the luxurious Spring Hill biosphere located outside of the devastated Old Town.

D’avin instead discover their most dangerous enemy is The Company man named Jelco (Pascal Langdale) who issued the original warrant they are operating under.

Jelco, who took out the warrant Dutch, D’Avin Johnny and Pree are utilizing to enter Old Town, have our heroes strung up (literally).

Jelco tells Dutch, D’Avin Johnny and Pree that they need to bring in a Westerley rebel  named Tighmon (Keder Brown) who has a canister of a deadly toxin that has been used to kill already.

Segue to Old Town, the four return to Pree’s bar, the Royale, which has been appropriated by a tough looking fellow named Gared (Gavin Fox).Naturally a good fight sequence breaks out with some good ole’ ass kicking!

Johnny scans the bar looking for some of the eight prisoners. Scared to death about Tighmon, the man commits suicide rather than face Tighmon’s wrath.

The scene turns to horror during the search for Tighmon, the Killjoys arrive at the prison they had escaped from. Inside many of the prison cells are desiccated, literally mummified corpses murdered by the toxic substance that Jelco is seeking.

Dutch, Johnny, and D’avin find a bio-gear protected worker who confirms it was The Company’s toxic gas that was used to put down an insurrection.

The bad news? Tighmon has apparently made off with a tank of the toxin that could kill everyone in Old Town!

The Killjoys put one of the mummies inside a body bag to seek out Doctor Pawter Simms for an autopsy. Pawter explains to Dutch, Johnny, and D’avin about the toxin.

The Company toxin dries out a human body nearly on contact. She makes a statement that will come in handy later in the episode “the only way to counteract the effects would be to inhale a lake”.

Dutch believes that Alvis will be the fastest way to find Tighmon. Alvis indicates to Dutch work he will help find the tank of toxin in exchange for safe passage out of Old Town for the miners and their families.

Too late! The Company minion Jelco launches a precision drone strike erasing Tighmon from existence! Subsequent to this development, Dutch gets in touch with Jelco who had launched the the drone that killed Tighman. In the meantime, Pawter has decided to stay behind in Spring Hill to keep tabs on the nefarious activities of Jelco and The Company

At this point all eight criminals on the warrant have been dispatched. With Dutch’s  team “official mission” complete, Dutch requests safe passage for her and her crew off of Westerley.

Alvis appears to join the Killjoys. They all hightail it out of Old Town through the underground utility system. Once there, Alvis plans revenge against Jelco and The Company hooking the toxin tank to the ventilation system of Spring Hills to eliminate murder all the Company officials there.

Dutch and Johnny try to persuade Alvis informing him Pawter has decided to stay behind to spy on The Company. As Alvis tries to disconnect the toxin tank, Alvis gets is exposed to the gas himself!

Dav busts in to save Alvis after the gas has dissipated tackling Alvis is a nearby tank of water. Alvis stops breathing after being submerged, Dutch and D’avin administer CPR saving the hapless Dutch smacks Alvis for nearly killing Pawter by his careless actions.

An exceptionally  sad moment occurs as the episode winds down to conclusion.

Jelco anticipates their move and confronts the both of them. Needing Pawter, a doctor, Jelco decides that she will live, however evil corrupt Jelco shoots and kills Hills!

During a feigned teary goodbye, Johnny kisses Pawter and gives her a hickey on the neck!

In reality it is a communication so she can transmit intelligence to them about the company.

Alvis decides his best course of action is to leave with the Killjoys.

The episode ends with the team heading to pickup Pree to depart Old Town.

After liberating his bar earlier in the episode, Pree elects to stay behind in Old Town to take care of his establishment.

In the final scene, Dutch, Johnny, D’avin and Alvis are in an isolated area of Westerley. Low and behold who turns up? It’s Turin!

Turin relates that The RAC has obviously been corrupted by The Company, In a strange turn of events, Turin suggests they team up to get to the bottom of the Level 6 conspiracy as the screen fades to black!

The questions ahead are many. They include what the heck is the Level 6 conspiracy The Company is executing?

Will Fancy Lee and Khylen ever be freed from their conversion to Level 6 mutant human beings?

And, can The RAC’s reputation ever be cleansed of the political filth The Company has infested The Quad with?

To find the answers to these questions, tune in each Friday on Space Channel in Canada and Syfy in the United States so we can all have a chance to become a Level 7 or beyond!

Please feel free to share this article with your friends, co-workers and or family and to leave your comments! We look forward to you visiting our dedicated Killjoys review and analysis web site in the future!

Or as many of our readers and visitors often do, visit WHR on Twitter, WHR on Facebook or visit me on Twitter by clicking the text links or images avatars in this news story. I and TeamWHR look forward to Seeing You on The Other Side!“