Okay, I expected Vampires Suck to be bad.  That is kind of the point of a spoof movie, isn’t it? To poke fun at a popular film genre while making fun of itself with over-the-top performances?

And believe me, I am no film snob. I like a dumb movie as much as the next girl, but you have to give me something to laugh at. 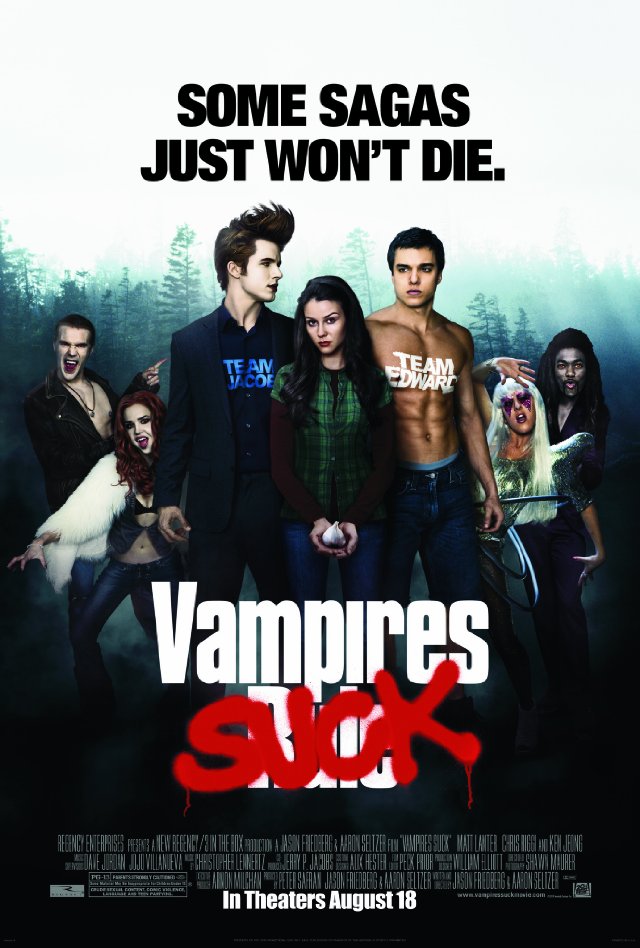 First of all, my apologies to those of you that have seen the movie and thought it was hysterical. I am very happy for you that you received value for your movie dollar.  For myself, I was immensely grateful that I happened to see Vampires Suck as part of a promotional screening via the local radio station so I will never have to regret lending this film my financial support.

Vampires Suck is a spoof of the Twilight movies, specifically the first two films, Twilight and New Moon.  There is a lot of potential for hilarity that could be gleaned from the Twilight movies, plus the fan groups, conventions, collectibles, etc., and I was looking forward to sharing a good laugh with other Twilight fans.  There were quite a few Twi-hards in the theatre with me, many of whom stood in line for several hours for free tickets to see this film. Sadly, there was very little laughter in the theatre once the movie began.

Vampires Suck appears to have been slapped together in a hurry with very little budget, very little time for writers to put together even a passably amusing script, or for casting to gather performers that could remotely do the job.  The sound quality was horrible too, making bad performances just that much worse.

While waiting for the film to start I commented to my friend that it was a shame The Hillywood Show was not involved, given their firmly established reputation for quality Twilight spoofs.  I thought that if anyone wanted to make a feature-length movie that poked fun at the Twilight franchise, they surely should have gotten The Hillywood Show involved.  Well, after seeing Vampires Suck I am very glad that Hillywood had no involvement whatsoever.

Spoof films should be chock full of good jokes, including references to movies, books, graphic novels, actors—things that only fans of the genre would get, making the spoof that much funnier.  There were a few of these in Vampires Suck but not many, and the way in which they were presented was pretty lame.  The omnipresent gross jokes made it into the film, but even these seemed to have been tossed in as an afterthought.

My recommendation: Skip it.  I would not recommend this movie to my friends.  If you really want to see it anyway, do yourself a favor and hit the bargain matinee or, even better, wait for it to come out on cable.