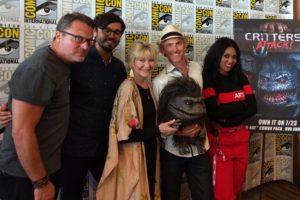 Welcome back WormholeRiders, Sharknado and San Diego Comic-Con Lovers!, While all the events at San Diego Comic-Con are filled with fabulous fun and fantasy, one of the most enjoyable happenings was the Sharknado panel conducted Friday evening July 10, 2015 moderated by Damian Holbrook of TV Guide Magazine! The Sharknado 3 panel was preceded by the Syfy Sharknado 3 Press Room where the stars Ian Ziering (Fin Shepard), Tara Reid …Read the Rest

Welcome back WormholeRiders to WHR You Decide! On Friday April 10, 2015 we had the privilege to interview Andrew Jackson, who loves to shock and surprise his audience with an ever expanding character range, now including a wonderful project named “Never Feed a Polar Bear!“. Andrew was once quoted as saying, “Actors grant themselves permission to behave in ways that would be impossible or unthinkable in the real world. As …Read the Rest

Rebekah Kennedy is the Perfect Match!

Welcome back WormholeRiders to WHR You Decide!, On Saturday December 06, 2014, we were honored to interview the gifted and gorgeous Rebekah Kennedy, a rising star in the Hollywood television, movie and web series entertainment arena! During our interview with Ms. Kennedy, we were pleased to learn first hand about her journey to the Los Angeles area near Hollywood, the support she received in getting there, as well as her …Read the Rest

Christmas in Conway is Compassion and Caring, Artfully Created by Hallmark Hall of Fame for the ABC Network!

Welcome back Hallmark Hall of Fame and ABC movie fans! We have been honored to not only interview a cast member recently (Andrea Powell), but have been granted the privilege of previewing a great Christmas holiday movie she is appearing in; “Christmas in Conway” which premiere this Sunday December 01, 2013 on the ABC Network at 9 PM E/P 8 central time! Produced for ABC Network by the great folks …Read the Rest

Home: Is Often Not Where We Think We Will Find It!

Welcome back movie fans, The acclaimed award wining movie “Home” is opening today in the Los Angeles area at the famed Arena Cinema Theater in Hollywood and New York’s Quad Cinema to richly deserved rave reviews, including kudos from this editor! “Home” is a film which has interested this editor for some time due to the sensitive subject mater therein which has afflicted a member of my own family wrecking havoc …Read the Rest

Ender’s Game: Is Only The Beginning!

Welcome Ender’s Game fans! Welcome back movie fans!  In its opening weekend, I had the pleasure of seeing a film that has been proclaimed as “a movie event 28 years in the making”; Ender’s Game is an adventure on an epic scale. I read more than a few reviews before I sat down and decided to write my own, some rating the movie very well, others not so well.  I …Read the Rest

Welcome back to WHR You Decide! This Sunday, November 3, 2013 at 10am Pacific Standard Time, WormholeRiders News Agency will be honored and humbled when we open up the lines at 347-838-9722 to chat with the extraordinary actress Andrea Powell, most recently of Ender’s Game! One of this fall’s most anticipated blockbusters, Ender’s Game, for those of you who may not have heard of it, is a movie based upon …Read the Rest