As you may be aware 2011 is the 45th anniversary of a television program that virtually set the foundation of television science fiction! Starting it all in 1966 I was a mere ten years old at the time and still clearly remember revolutionary science fiction nights on NBC for the next three years!

Of course we are talking about Star Trek, the long lived series franchise which has lived and thrived through five series and ten movies starting in 1979 with “Star Trek: The Motion Picture” and continuing with the fantastic blockbuster simply entitled Star Trek (2009) for which it finally won an Academy Award after a fourteen total nominations over the course of 30 years of movies!

Beginning today the great team at Creation Entertainment is “beaming” a large number of the cast from several of the Star Trek series for a gala event being conducted just south of San Francisco at the San Francisco Airport Hyatt Regency Friday, Saturday.and Sunday March 11, 12 and-13, 2011. 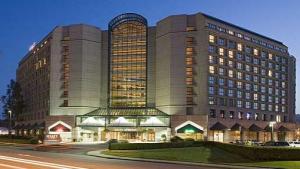 This super event, part of the Creation Entertainment Star Trek convention circuit during the 45th anniversary year 2011, is simply not to be missed! If you live in the Bay Area or are visiting this weekend, we understand there are tickets available at he door. We suggest you make sure and get there early since you the Star Trek fan do miss this golden opportunity to meet science many fiction legends of Star Trek!

In closing for now, we are pleased to announce that we have assigned our most senior San Francisco Bay Area editors to bring you robust live coverage of the event courtesy of Creation Entertainment.

As always we appreciate your visiting our news sites at WormholeRiders News Agency. Good luck in the contest! Please do NOT leave Your Answer or Twitter identity here as such are not considered valid entries in the Stargate Vancouver2011 Gold Tickets Giveaway. Thank you.

If you prefer, click the social media icons below to share this news article or as many of our readers and visitors often do, or me on Twitter by clicking the text links or images avatars in this news story and or on See You on The Other Side“! Thank you.