The Neighbors: Family Conference, Not Just For Wars!

Welcome back for season two for our alien analysis about The Neighbors!

While Marty (Lenny Venito) is worrying about drinking summer beer after Labour Day, the neighbors drop in like this is some kind of sitcom. In other words, they walk right in.

Since it is the one year anniversary since the Weavers and the aliens met and became friends, Larry Bird (Simon Templeman) and Jackie Joyner-Kersee (Toks Olagundoye) have brought over a bottle of champagne to celebrate. 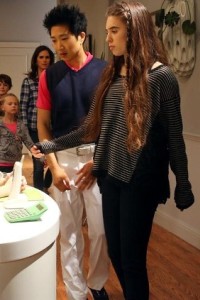 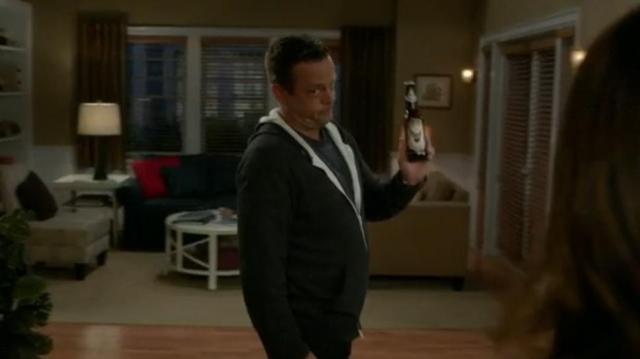 Naturally, a champagne celebration with culturally confused aliens never goes as expected. Instead of cracking it open and distributing it in fancy glasses, Larry smashes it on the counter. It looks as if the kitchen is now ready to sail. 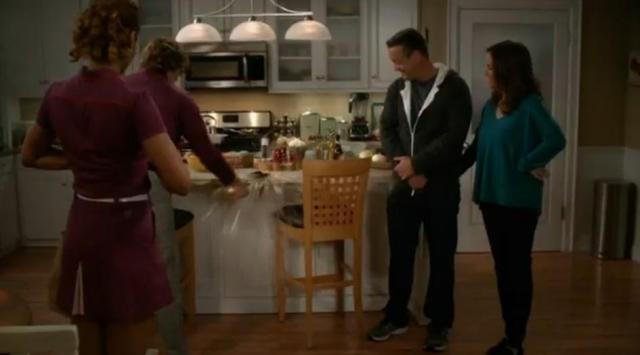 Larry is not finished yet. He has brought show and tell – the story of how they met and became friends, beginning, of course, with himself as the great and fearless and ever so cute leader. Marty and Debbie Weaver (Jami Gertz); not so much. Their portraits look like drivers license photos. 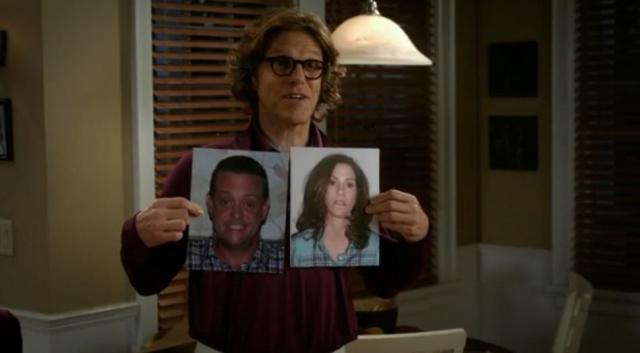 Since Jackie and Larry are there, Marty suggests one more summer evening game of cards out on the patio. That sounds fun, and relaxing, until they discover Reggie Jackson (Tim Jo) and Amber Weaver (Clara Mamet) getting hot and heavy in the dark. 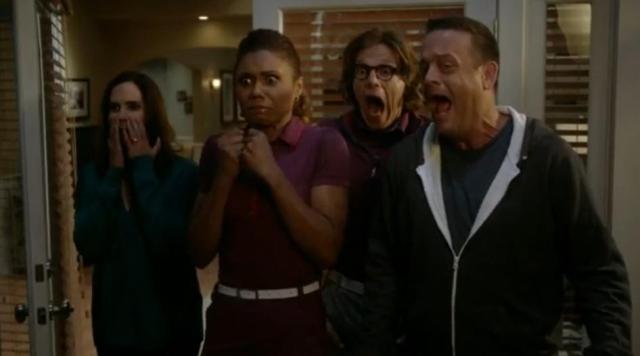 This leads to a very upset Debbie because Amber did not confide in her mother.  Jackie also is a touch unhappy as a result of her rather unusual fixation with her eldest son. “I just want him to love me, much, much more than he loves anyone else. Is that too much to ask,” Jackie wants to know. 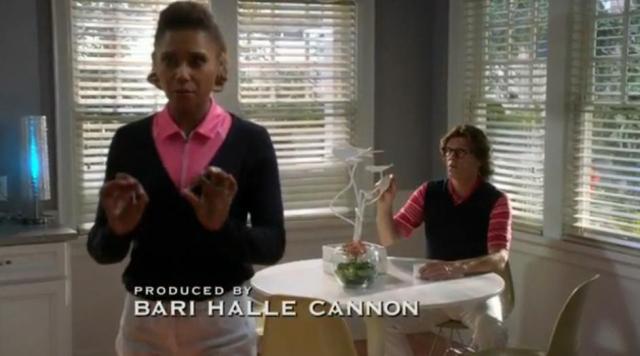 Larry has other worries. He no longer has an unlimited supply of money. His father has cut him off because they have decided to remain on earth. Since Jackie wants to deal with her son and his new relationship, and Larry does not, the solution is simple. Jackie uses a powerful whistle to call a family conference. 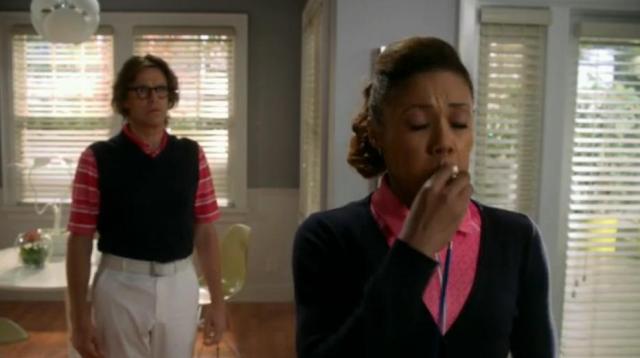 In Amber’s room, Reggie worries that he is displeasing his parents. Amber sees her parents, especially, her mom, as a nuisance at best. Typical teenager; parents only start getting smarter when she gets older. 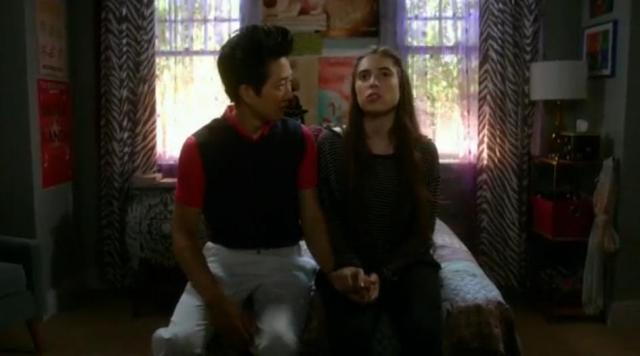 The Weavers are invited to the family conference, with Dick Butkuss (Ian Patrick) entertaining another very interesting role – office manager. 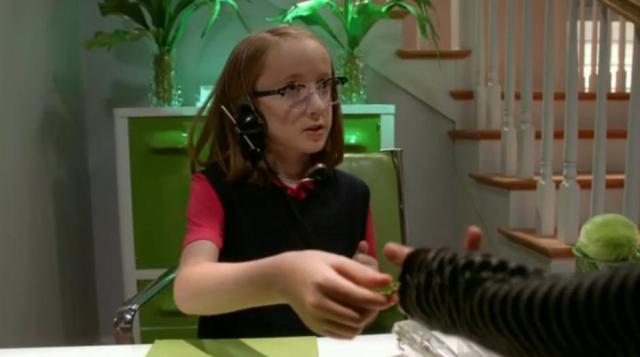 Everyone signs in, then walks into the closet, which leads to an underground bunker. Then it gets a bit weird, and more importantly, funny, as Jackie does an imitation of Catherine Zeta-Jones in the Sean Connery film, Entrapment. 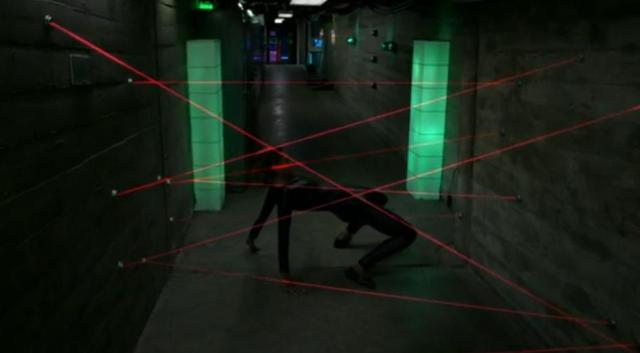 It is nice that the writers decided to use the underground tunnels again this season. It creates a limitless opportunity for stories that can be a bit more sci-fi in nature, should they decide to go that route. Jerry Springer makes a guest appearance as moderator of the family conference.

Fortunately, they do not take it as far as the expletive ridden Jerry Springer Show! 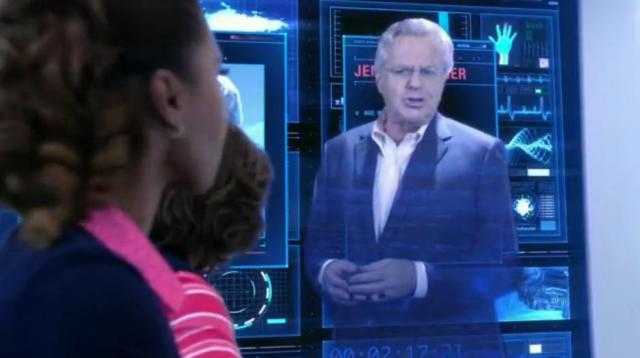 What do we learn about the aliens this week? Apparently they are mostly plant based, so they smell grassy and breeding with a human would create orchids. The rest of the family present their own opinions about the relationship. Marty likes Reggie, so he does not mind the relationship. Larry is a “nay”. 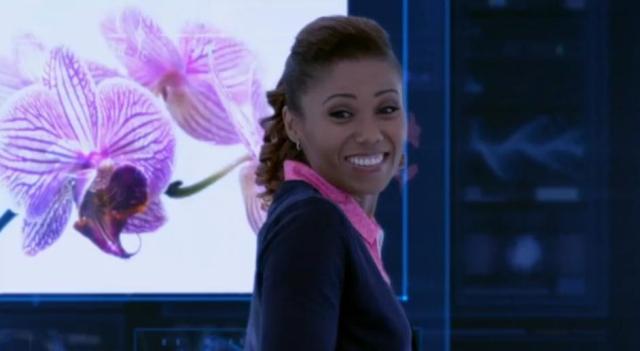 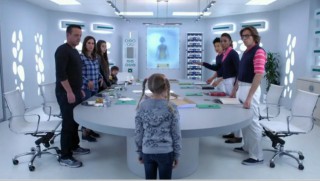 As the day stretches on, there is an outside magnetic demonstration and a shouting match between the families back inside.

It takes young Abby (Isabella Cramp) to bring reason back to the group. “Reggie gave Amber a new face. I know all my sister’s faces…there is sleepy morning face, mad face, mad at mom face.

Anyway, Reggie gave Amber a new face. The only face where she smiles so big, you can see her teeth… I think you should all vote for Amber and Reggie in honour of my sister’s 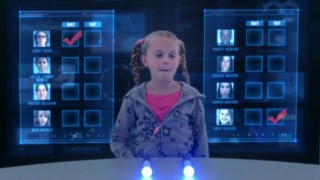 To complicate things, Larry made a call. To whom, we do not know, but it results in Reggie’s soul mate arriving on the door step. Reggie now has a choice to make.

Amber gets to witness what could be her first real heart break. As Amber’s mother, Debbie wants to help. The amazing thing is that she does.

She tells Reggie that he is not allowed to talk to Amber about anything that takes place more than one month in the future. Somehow, that works. 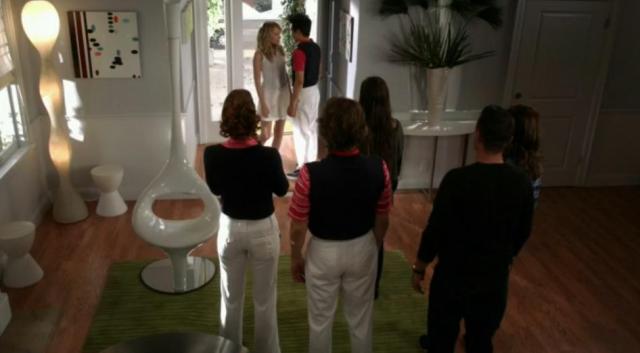 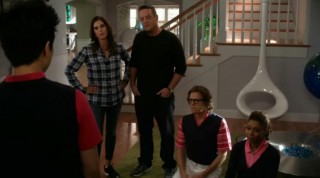 Reggie also comes up with a profound statement. He does have a soul mate. It is Amber.

It is why his family came to earth and why her family moved next door, so they could meet. “Heaven and earth moved for us”.

That solves the problem. Everyone is happy. There is no vote. The family meeting breaks up. The only

problem now is, Reggie finds himself still magnetically connected to the other soul mate. Oh, my.

To tie up loose ends, Larry, Jackie, Dick and Reggie brainstorm about ways to bring money in. After several unlikely ideas are voiced, Jackie suggests that Larry get a job. Larry reacts very negatively to the idea. Hey, why not win at casino games as he has in a past episode… 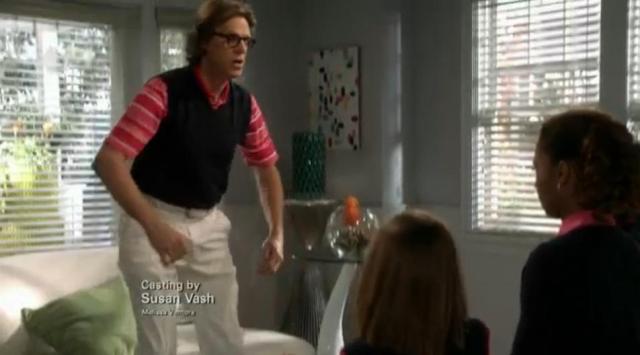 Great quotes from this week’s episode:

“You know the old saying: ‘Happy wife, happy life … No need to use a knife.'” – Larry Bird

“We don’t have an underground tunnel!” – Marty

“It’s not next to your nuclear missile silo?” – Reggie Jackson

“Welcome to the conference room! Just a little thing we put together for conferences and wars.” – Larry Bird

“As the old saying goes: ‘When the wife remains happy, the knife can stay in the drawer.'” – Larry Bird

“How many spaceships have to land in New Jersey before NASA intervenes?!” – Debbie

Thanks to Kenn for final staging of the audio video embed of Ben Rector’s great song ‘I Like You” that was featured in the episode in this news article, and manhy thanks to you for stopping by WormholeRiders News Agency!