The Neighbors: Any Friggin’ Sunday Can Be Relationships United!

This weeks episode is written by Jeremy Hall and Kristi Korzec.

Football is the American game. The reason many Americans love Sunday. As mentioned by Marty (Lenny Venito), one of the most iconic films about football, “Any Given Sunday”, gives us a better understanding of why football is so important to Americans.

In fact, many Americans will spend a good portion of the last day of the weekend watching their favorite teams attempt to crush the opposition. As usual, with The Neighbors, there is a point to the story – one that we should all pay attention to.

In this episode, Reggie (Tim Jo) continues to try to move his relationship with Amber (Clara Mamet) forward. He makes it quite clear through his dialogue with Debbie (Jamie Gertz) that he has no interest in a sexual relationship with her daughter. Rather, he is doing whatever he can to give her the perfect romantic evening. Naturally, he chooses the wrong people from whom to take advice, namely, mom and dad Weaver. 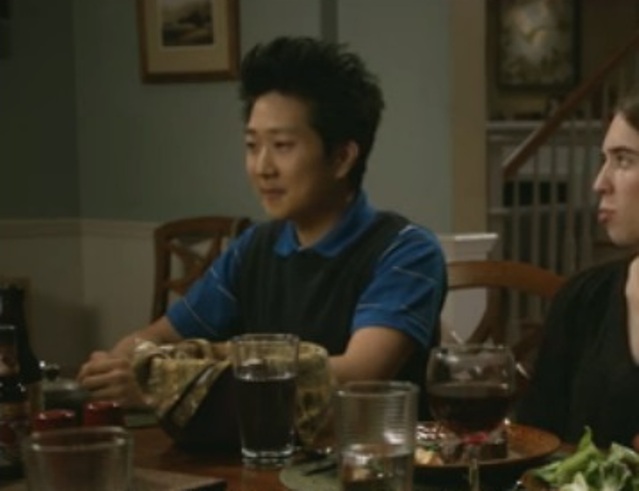 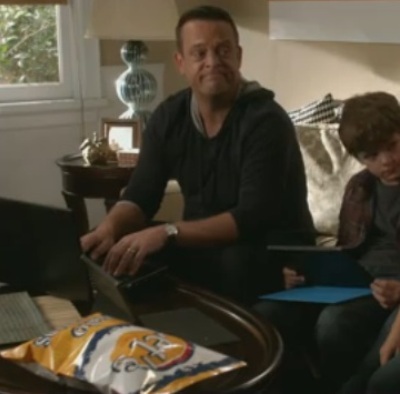 Marty is engrossed in Sunday football, completely ignoring anything else. We discover that this is not only a Marty Weaver tradition but is also the tradition of Debbie’s parents before her, and obviously, a pet peeve for Debbie, who has resigned herself to spending Sundays alone as Marty, and now, Abby (Isabella Cramp) and Max (Max Charles) spend the day glued to the television.

Larry Bird (Simon Templeman) has finally taken the time to watch golf, only to discover that he has modeled the entire community after a sport he hates. Therefore, driving golf carts and wearing golf clothes is unsuitable.

Oh, my. So, attempting to discover a new sport, he tags along in an attempt to find something brand new for the neighborhood to model.  Larry inserts himself in Marty, Abby and Max’s football plan, hoping to learn something new. 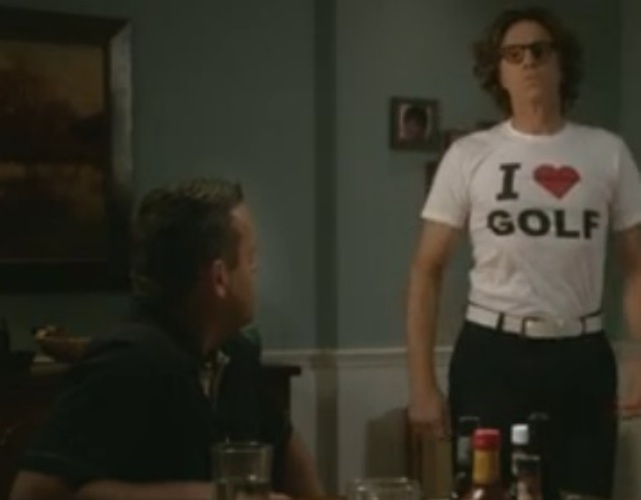 Naturally, Larry gets football wrong, showing up with the right jersey, but also holding a Vu 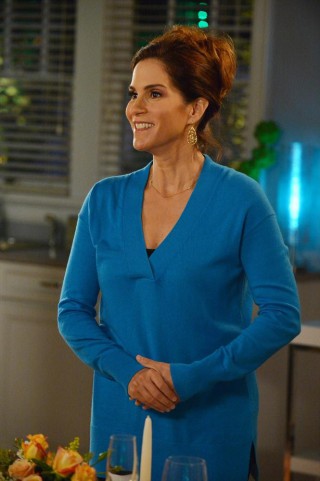 vuzela, a noise-maker that became popular during the 2010 International Soccer competition in South Africa. Since the Europeans call soccer, football, we can understand Larry’s confusion.  There is also a very funny sight gag during the episode when Larry, extremely frustrated with his golf attire, removes his golf shirt only to be seen wearing a T-shirt with the, “I heart golf” statement on the front.

Since Marty and the crowd have taken over at the Weavers, Reggie calls upon Debbie to help plan the perfect, normal, human date for Amber at the Bird/Joyner-Kersee house. Amber seems far too focused on what she terms weird and awkward dates with Reggie where he simply watches her eat. Poor Reggie, although alien, he can do nothing right when it comes to dating.

Maybe Amber is a bit too judgmental and needs to relax a little. Reggie also seems to disturb Amber by being too friendly with Marty and sharing their entire schedule with him.

Jackie Joyner-Kersee (Toks Olagundoye) is continuing to support the family by managing the Taco restaurant. She, of course, comes home exhausted but makes the mistake that many of us do, of not having time for her significant other, Larry. This becomes one of the underlying themes of this episode. Larry feels rejected, leading later on to Jackie feeling rejected when Larry attempts to find a new sport to keep himself entertained. 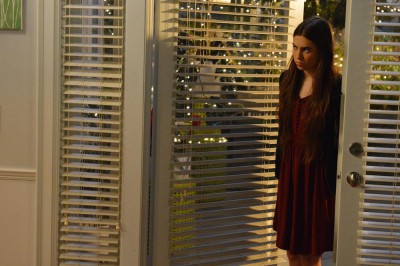 Since Reggie’s desire to please Amber, nicely coincides with Debbie’s frustration, that, like Jackie, she is being ignored by a husband who is far too interested in a sport, Debbie offers to teach Reggie how to make what she imagines as the perfect meal for Amber. The generation gap sets in strongly here. Debbie sets the romantic scene, complete with flowers, candles and an accordion player, who only seems to know one song – Voices Carry, by Til Tuesday. 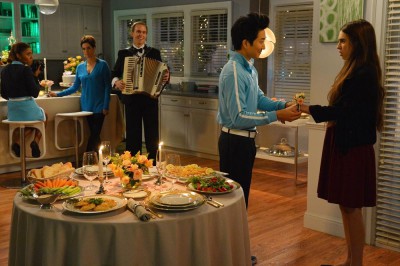 Ultimately, Reggie and Amber, who get swamped by Larry, looking for Jackie, and Marty, looking for Debbie, escape to the roof where Amber explains that all she really wants in a romantic date, is some quiet time with Reggie, and her favorite fast food and chocolate milk shake. We discover that Reggie and the aliens do not eat food, not because they do not want to, but because they are unable to. Reggie tries some of the milk shake, only to vomit it up seconds later. 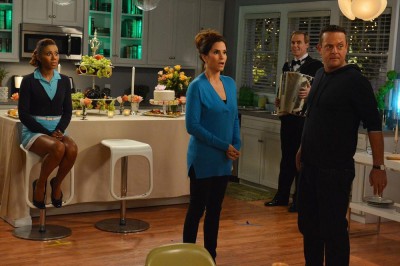 Inside the houses, Debbie and Marty get closer together as Marty tells her how much he cares about her and that she is always more important than football. “The only tight end I wanna watch is yours”, he tells her. 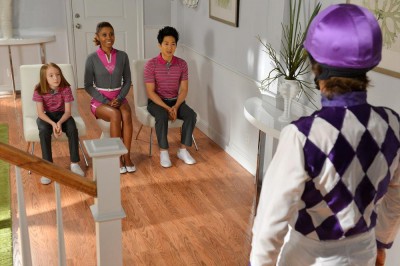 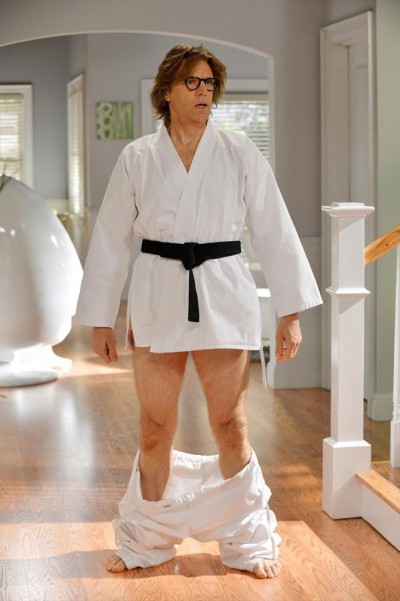 In the other house, Larry and Jackie also have a talk that clarifies their feelings. “I don’t like you working all the time, wife. I don’t like that the only way you can decompress is by doing it alone”. Jackie answers, “I shouldn’t have said that. That stupid game has shown me the other side of things and I didn’t like it. So, even if I am tired, I’d much rather be tired with you. You’ve always been my favorite form of decompression, L.B”.

The episode ends with the sport announcer giving a summary of the football game that sounds much like a summary of the episode. Larry also models several sports outfits to offer his family a new theme for their community.He looks progressively more silly in each outfit. He ultimately decides, “That’s it, we’re going back to golf. It’s boring as hell, but at least we look amazing”. I must say again, that I love Larry. Simon Templeman is comedic genius in his timing. Jami Gertz is the star of the show, but she is definitely being out-shined by the alien family. Toks Olagundoye and Tim Jo are also well chosen for their parts in this very funny series. Well done, guys.

Great lines in this episode:

Reggie: “Talk to me, Debbie Weaver. Help me put some love in my actually”.

Debbie: “Reggie, you’re a sweet kid but I can’t help you get into my daughter’s pants”.

Reggie: “Why on earth would I want to wear her pants?”

Abby: “…then, the handsome one throws the ball as hard as he can. And then, one of the jumpy guys tries to catch it. And then, if you’re lucky, someone pretty sings in the middle”.

Larry: “Is this sports or a Broadway musical?”

Reggie: Excuse me, I don’t want to complain, but it’s starting to feel like I’m not involved in my own date”.

Debbie and Jackie (together): “Oh, mind your own business, Reggie”.

Larry: “Marty, I have a question for you. The football is shaped like an egg, and they rarely touch it with their feet. Why isn’t the game called, hand-egg?”

Marty: “No, no, no. My calendar still says Rockin’ Bowling.  Why wasn’t my calendar updated? What’s going on?”

RSS feed for this post (comments)
Previous Post
« The Neighbors: Any Friggin Sunday Pre-Review, Sports, Milkshakes and Heartfelt Feelings!
Next Post
The Neighbors: We Jumped The Shark (Tank) or, “Sharks, I’m Webbie Deaver” »