Written by Scott King and directed by Jeffrey Walker.

I often like to examine episode titles to try to determine where the writers are coming from when they come up with some of the names. In this case, we are aware, due to previous advertising, that this episode is a cross over with the widely popular Shark Tank.

What is unusual with this title is that it also refers to a term called, “Jumping the Shark”. For those who do not know, “Jumping the Shark” describes the moment in the evolution of a television show when it begins a decline in quality that is beyond recovery. 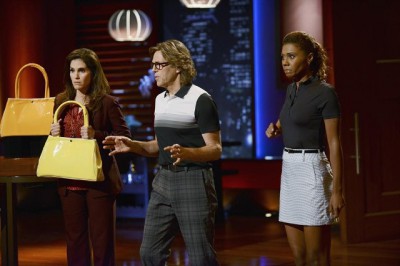 This usually involves a particular scene, episode, or aspect of a show in which the writers use some type of “gimmick” in a desperate attempt to keep viewers’ interest. Its name is taken from a scene from a mid-season episode of the sit-com Happy Days when the character Fonzie jumps over a shark on water-skis.

Part way into season two of The Neighbors, it is far too early for the writers to be floundering with the series. Thus, this is another example of the series poking fun at itself to entertain the audience. Did it work? You tell us. 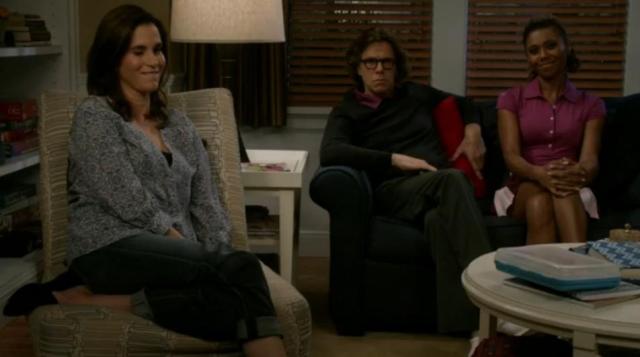 The episode begins with Debbie Weaver (Jami Gertz) watching Shark Tank with Larry Bird (Simon Templeman) and Jackie Joyner-Kersee (Toks Olagundoye). Marty (Lenny Venito) is not really watching. He is off to the side playing an on line video game. He is there in spirit, however, I think… As they are watching, we discover that Debbie is still working on a business of her own.

One that she hopes will be so awesome that when she goes on Shark Tank, they will fight over who will invest in her idea. At this point, the writers pull another television trope. They remove the fourth wall, meaning that the actors interact with the audience. In this case, Debbie gives us a wink, letting us know that what she has just said is about to happen. 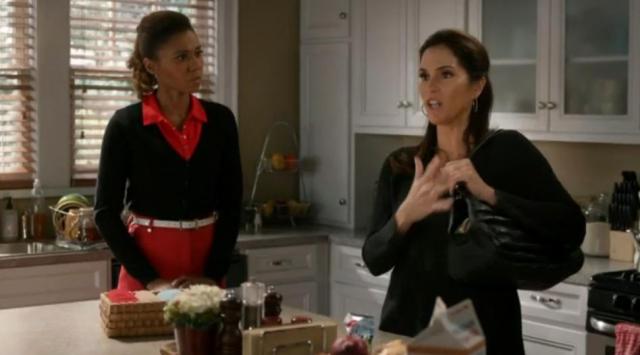 The next day, the neighbors are back, discussing their upcoming movie date. This leads to a discussion of Debbie’s desire to sneak treats, including a bottle of wine, into the movie theater. Suddenly, Debbie comes up with a plan to stow liquid yummies into the insides of her purse. I thought that was what a mickie was for. Or, hey, here’s an idea; use an empty water bottle. Since neither of my ideas is apt to lead to an entertaining story, we better go with Debbie’s plan.

Lord Varquod (Marty) and passengers are dropping Max (Max Charles) off at his sleep over on the way to the movie. So that is where Max has disappeared to. Also, where the heck is Reggie Jackson (Tim Jo)? Since he is so enamored with Amber (Clara Mamet), he should be acting as her shadow about now. Writers, this is a pet peeve of mine – family members do not just disappear and reappear conveniently to support the story.

There has to be a better way to deal with this. For example, maybe Reggie calls Amber and asks her to come to his place, but she has to decline because she is babysitting. It would only take a few seconds and solves the problem of an incongruous plot. 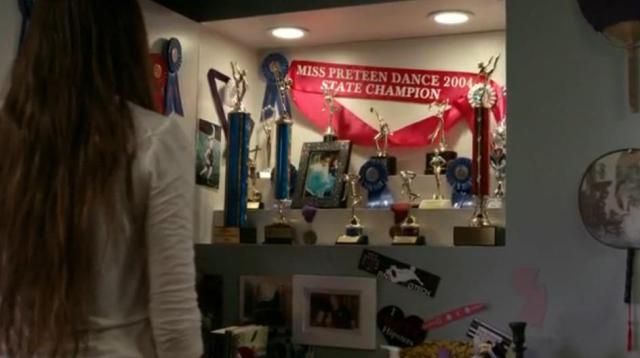 This episode also brings Amber and Abby (Isabella Cramp) together. Abby is taking part in a dance competition. Amber feels sorry for her when all of Abby’s friends desert her, so the two sisters work together to create the perfect show. We also learn that Amber had been into the dance competitions when she was a child as well. She hides her awards in a secret nook in her bedroom. 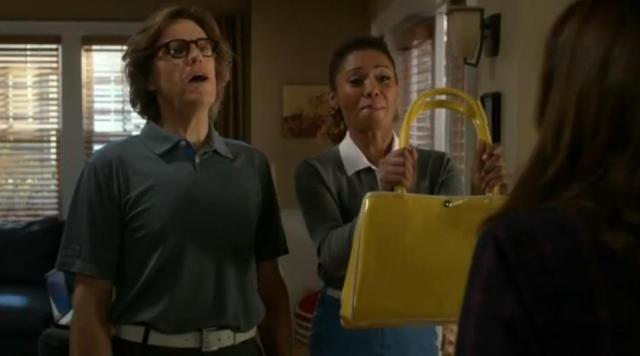 Debbie has been working on her purse idea, which she has decided to call the “Bev-Bag”. It turns out to be a leaky dismal failure. Disappointed, she does what most women do when faced with a massive failure – she verbally beats herself up.

Fortunately, Larry and Jackie have also been busy crafting a beverage bag. The big difference is that their bag actually works. It is time to set up an appointment with the Sharks. YAY! 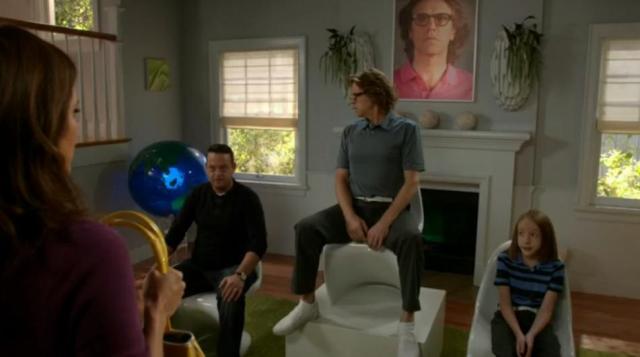 Debbie practices her routine with Larry, Jackie, supportive Marty, and Dick Butkus (Ian Patrick) in attendance. Larry, of course, completely fascinated with the cushy job of being a Shark, places himself, literally on a pedestal as he sits through Debbie’s lame presentation. He also begins his many dismissals of Debbie and her bag before and during her presentation on Shark Tank. 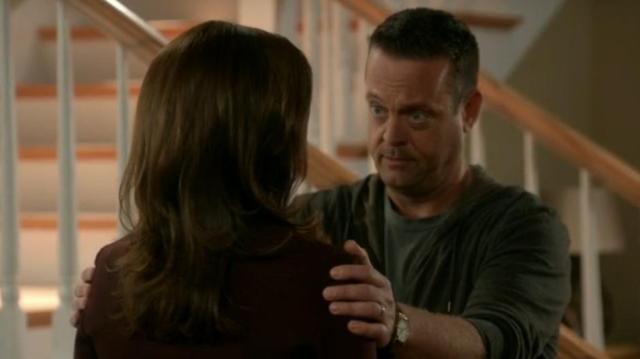 Marty, despite his obsession with his computer game, demonstrates how truly supportive he is to Debbie. This is how it is done, guys. Marty is a real catch. 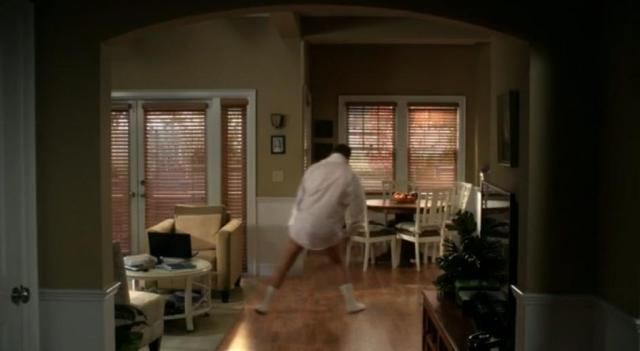 The best sight gag in the episode is when Marty does his imitation of Tom Cruise in Risky Business. Well done writers, and well done Lenny Venito. Moments later, despite a promise to Debbie not to, he is right back playing his on line game. 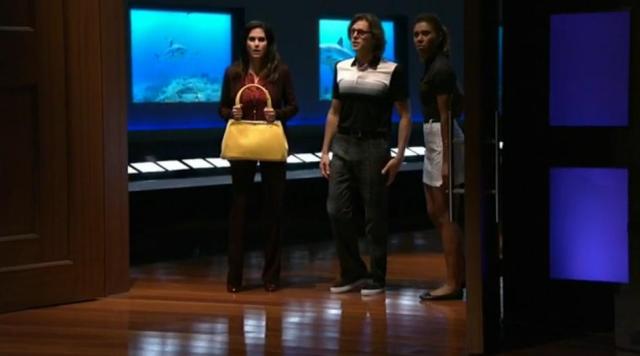 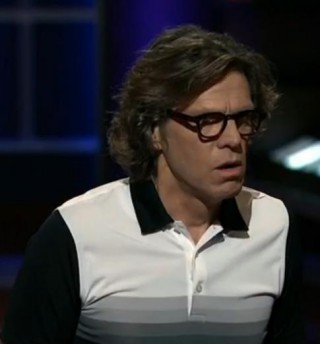 Debbie, Larry and Jackie have reached the crucial moment when they face the sharks. Since Larry and Jackie have been arguing, they have not been paying attention to Debbie, who has fallen back into her self loathing. The three of them arrive at the doors to the stage and freeze there. Fortunately for Debbie and Jackie, Larry has enough arrogance and conceit that he can walk into any room confident in his abilities, whatever they are. They all walk in, looking confident. Debbie introduces herself. Before she gets another word in, Kevin O’Leary announces, “I’m out”.

Again, lucky for Webbie, Larry is there to take over and tell the sharks all about the purse that can be used to sneak a drink into a movie theater so the purse’s owner does not get caught. Sadly, this was not well thought out. One of the sharks got wealthy through ownership of a chain of movie theaters, and, hello, hello, the greatest profit in a theater is made at the concessions. I should say so. $1000.00 for a small cola, indeed.

Anyway, the lack of planning and thinking things through falls on top of Larry, who, for once, has nothing to say. Larry’s expression is priceless. The shock does not last long with Larry. Now comes the awe. He changes sides, stands beside the sharks and tells Debbie that he is out. No surprise there. 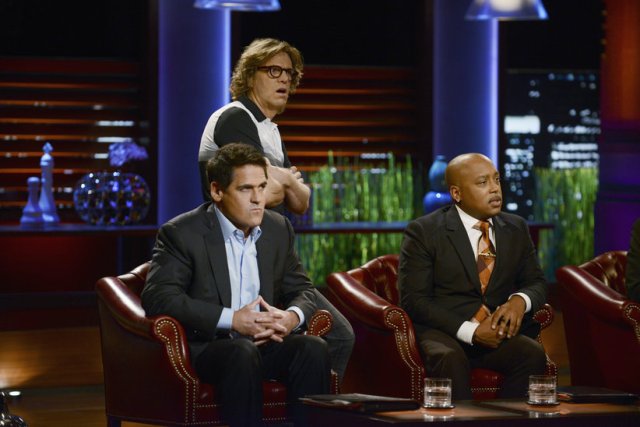 Back at the Weavers, Marty discovers, quite by accident, that his nemesis in his computer game is actually Dick Butkuss.  Once they resolve the shock and awe of this situation, Marty and Dick conspire to work together and clean the field of the other players. 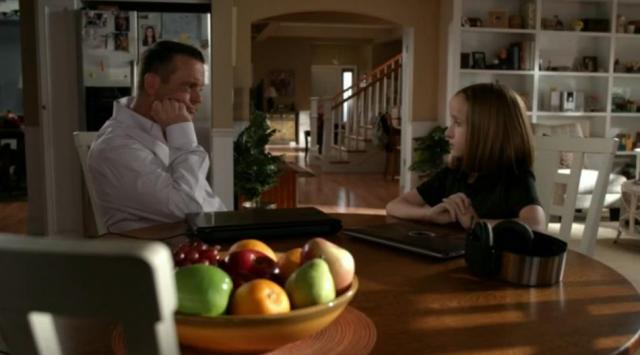 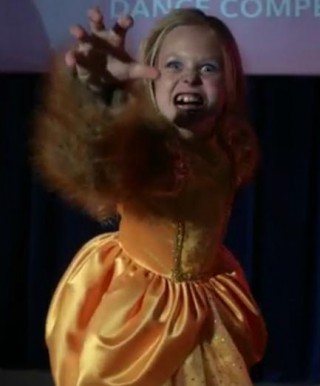 Odds are not on Abby’s side, according to Amber. She is entering a team competition as a solo. However, her Beauty and The Beast effort wins the audience and the judges when she rips off her costume sleeves to reveal the furry arms of the beast. This is a bit contrived, but good on Abby for winning.

Back at the Shark Tank, Debbie comes clean with her story. She is not a soldier on her way back to Afghanistan. She did not just suffer through a hurricane, a tornado and a dialysis machine.

As a stay at home mother, this was going to get Debbie back into the work force. However, she says, “I brought a crazy man with me because sometimes I don’t have the confidence to do it alone”. As Debbie speaks, Mark Cuban gives Larry a good look. 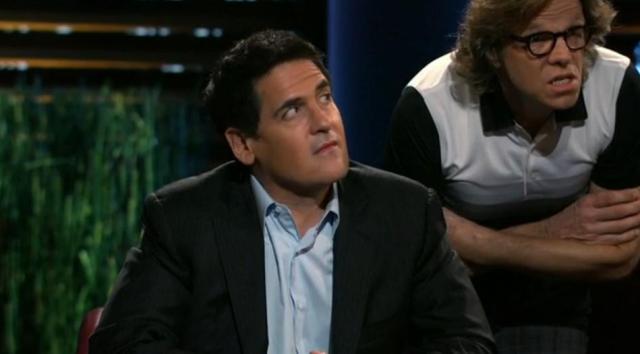 Fortunately for Debbie, Barbara Corcoran takes pity on her. She tells Debbie that the purse is a terrible idea, but if she goes to business school and then gets in touch with Barbara in a year, she will help Debbie figure out the right business. What a wonderful opportunity. However, in real life, she would be thrown out of the studio for lying. This is a nice story, however, so lets accept this very unlikely event for Debbie’s sake. 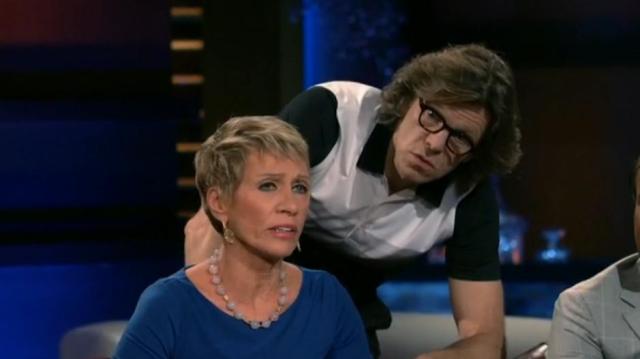 The show ends with Larry realizing he has not lived up to his part of the relationship he has with Jackie. “I am an unemployed waste of space, and you’re the only reason we got that far. I should have listened to you more.” To Jackie’s justified question about why he cuts her off, he replies, “I’m sorry. With all my bluster, the Sharks didn’t want me”. Jackie is the catch in this relationship. She is always supportive of Larry. 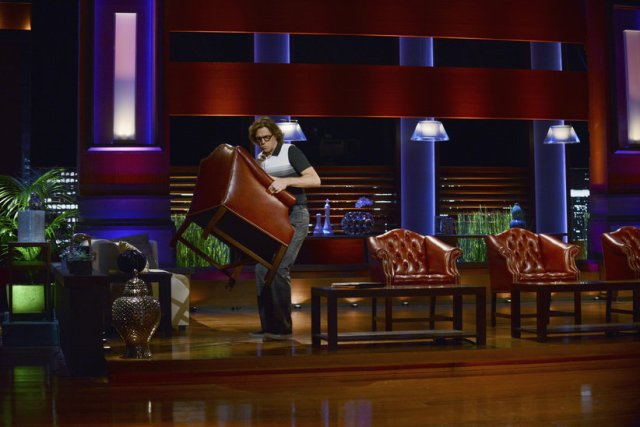 Despite a few things that bothered me, this show was very good. I continue to love Simon Templeman’s ability to make me laugh. Toks Olagundoye is wonderful as his straight-man. It cannot be easy to play a character opposite Templeman, and she consistently hits it out of the park.

Best lines of the episode:

Larry: “Hello Sharks. I’m housewife, Debbie Weaver, and I love wine and I love movies, and now, I can love them both at the same time.”

Marty (to Debbie): “Baby, the only stupid thing you’ve ever done is marry me.”

Larry (to Debbie): “You get progressively worse with every try. You’re like M. Knight Shamalan”.

Marty (to Dick): “Sort of cheating is my middle name”.

Dick (back to Marty): “Marty Sort-Of-Cheating-Weaver? Suddenly my middle name ain’t so bad.”

Comment (1) on “The Neighbors: We Jumped The Shark (Tank) or, “Sharks, I’m Webbie Deaver””