The Neighbors: Good Debbie Hunting, or Be Careful What You Wish For!

We are eight episodes into season two in an episode directed by Josh Greenbaum and written by Kristi Korzec, and Debbie Weaver (Jami Gertz) discovers celebrity as she gets lots and lots and lots of fan mail for her appearance on Shark Tank.

This is where the continuity of one episode into another pretty much ends. Debbie has decided that she will be attending business school, which means preparing for an entrance exam. 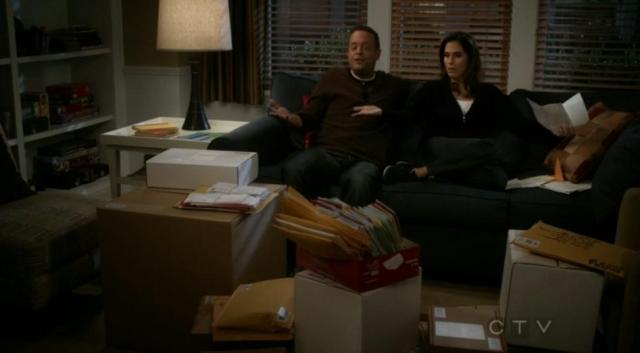 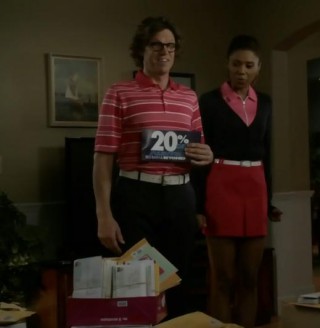 As usual, Larry Bird (Simon Templeman) and Jackie Joyner-Kersee (Toks Olagundoye) stroll into the Weavers home like they own the place. There must be a television trope for this, because it seems to happen on virtually every comedy.

True, it does reduce the time needed to answer the door, solving a few timing issues. Larry and Jackie are pleased since they received mail inviting them to get a discount at a local store.

As the plot progresses, Debbie and Marty (Lenny Venito) tell their neighbors that they will not be able to attend the play, Grease, because Debbie has to study. I bet she never thought she would be saying that at her age. 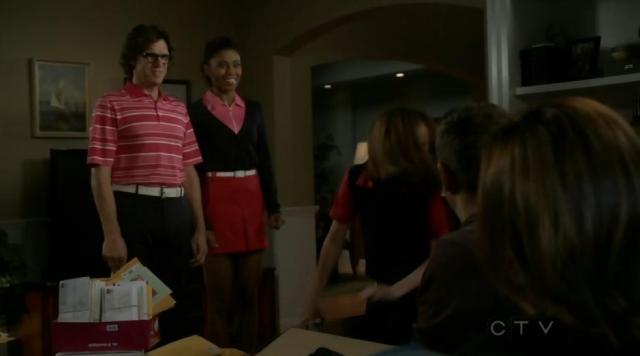 Debbie is mostly concerned with her ability to relearn math. Fortunately, Marty has thought of everything, including a math tutor – Dick in a Box (Ian Patrick). The poor kid spent most of the previous several minutes waiting in the box so he could make his entrance. Waiting quietly for long periods of time seemed to have been part of his parent’s expectations in Season 1 as well. Thus, nothing new, really. 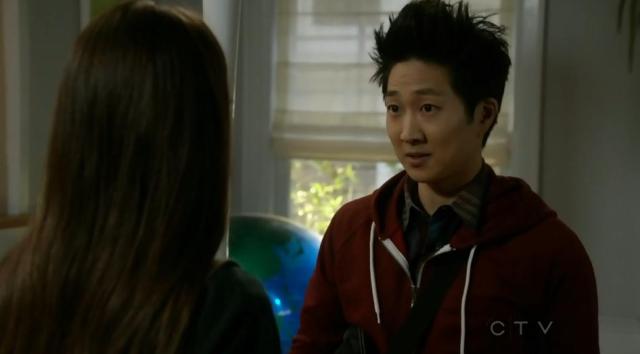 While Dick is spending quality time with the parents, Amber (Clara Mamet) and Reggie Jackson (Tim Jo) are setting up a television date . Reggie wants to try life as a popular teen. This sounds innocent enough until we stop for a minute to remember that Reggie is an alien. Obviously, this new event will not go smoothly. 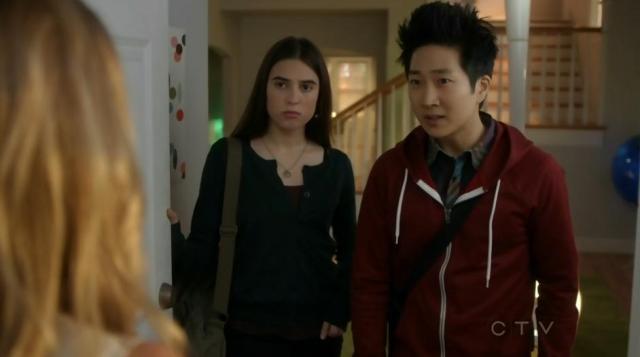 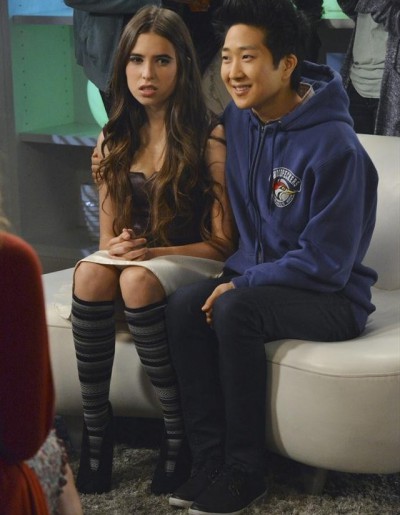 Since we were speaking of people just walking in and not knocking on doors or ringing doorbells, along comes a situation in this show to prove me wrong.

Jane the alien (Megan Park) has returned to profess her undying love for Reggie. When Reggie told her to leave the first time, she ended up in New York City, “where I learned two very important human laws.

One, if you stand on a street corner you’ll become the property of a man named Taco who will make you dance in tall plastic heels”.

Amber tells Jane that it is not a human law. She continues, “And two, if you hail a cab and you have a date, someone is going to steal it. So I am here to fight for my cab”.

Fortunately, Reggie shows he has a backbone and tells Jane that his soul mate is a beautiful, moody brunette, “this is what I want”, he tells Jane, pointing at Amber. So, goodbye Jane; the position has been filled. 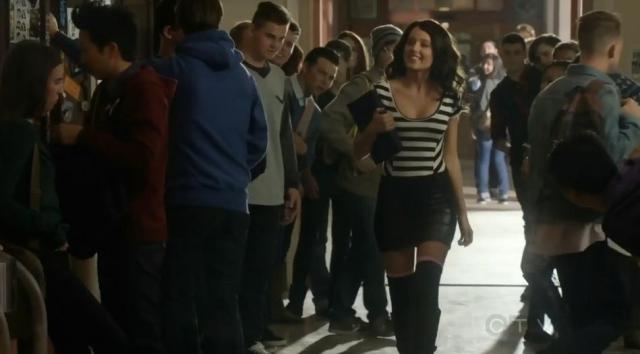 Jane has not yet begun to fight, apparently. She arrives at school the next day, all tarted up and with brunette hair, since that seems to be what Reggie wants. The looks on Reggie’s and Amber’s faces are wonderful. 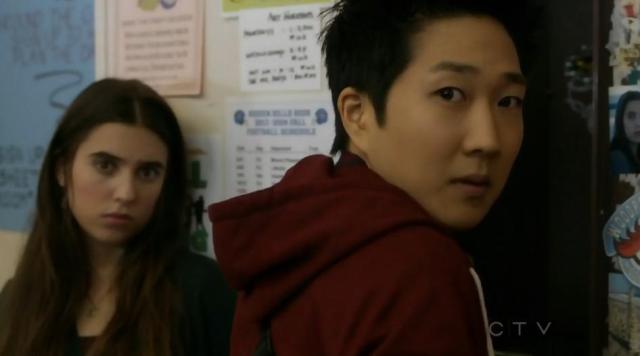 Things get weirder. Instead of being offended and upset, Reggie is thrilled that one of the cool kids spoke to him. 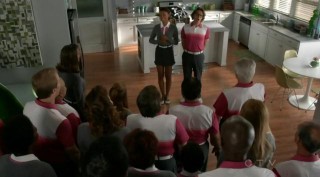 Back at the alien household, Larry and Jackie hold auditions for their new friends who will take the positions of number three and number four best friends, respectively. The winners receive two tickets to Grease. What fun.

Things do not go well for the rest of the aliens, however. Their answers to the difficult questions asked by Larry and Jackie are all exactly the same.

Debbie is not doing so well with her math studies. Max (Max Charles) and Abby (Isabella Cramp) are being distracting. She bombed the practice test, she says, because she does not have time to study.

Any mother would be able to sympathize with Debbie. Children are very demanding of their mother’s time. Household chores do not go away even when the kids are at school. Marty steps up to the plate and promises to take over. His attempts to look after the kids so Debbie can study are not the best, but he is trying. 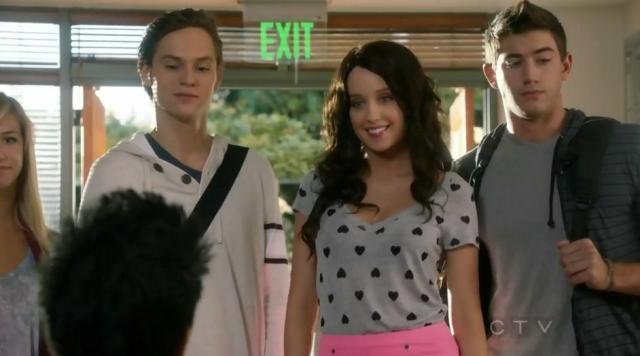 Back at High School, Jane enters again, this time with her own entourage. Wow, these kids are shallow. Anyway, the popular kids have decided, thanks to Jane that Reggie is okay. That means they can send time with him. Glad that was settled is such an important way. Reggie is happy though. He has discovered he is going to have a crew. Yay, Reggie.

The party is in full swing, but where is Amber? On cue, she appears at the doorway, wind blowing her hair back. It turns out that one of the alien neighbors is using a leaf blower to cause that effect. Oddly, when he redirects the air flow, Amber’s hair continues to blow. Someone goofed…oops. 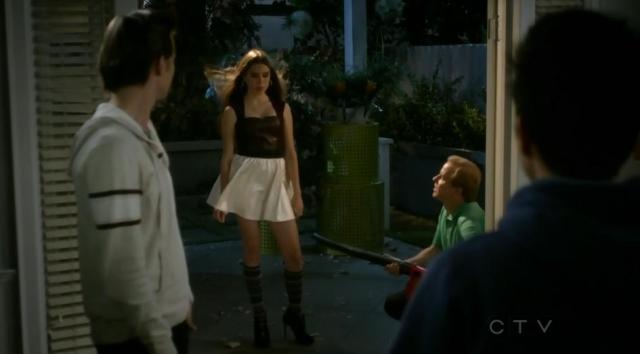 Larry and Jackie arrive to the party dressed as the characters from Grease. Jackie looks fabulous. She and Jane do a 50’s dance from the movie, impressing the jock that Reggie was hoping to impress. Best party ever, apparently. 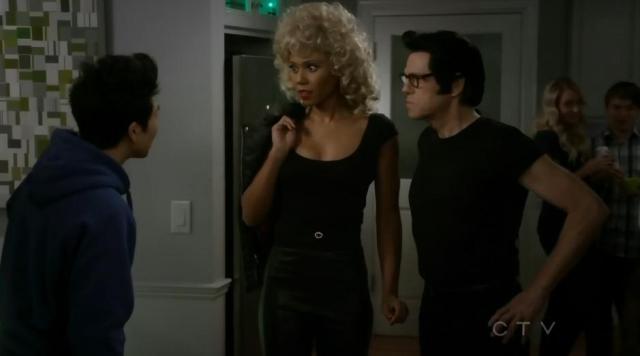 Debbie continues to be distracted by her children despite Dick’s efforts to keep her focused. He also mentions “Good Will Hunting”. This episode plays on the name of that movie, but that is all the two productions have in common. Will, in the movie was a genius at mathematics. Debbie is far from genius material. 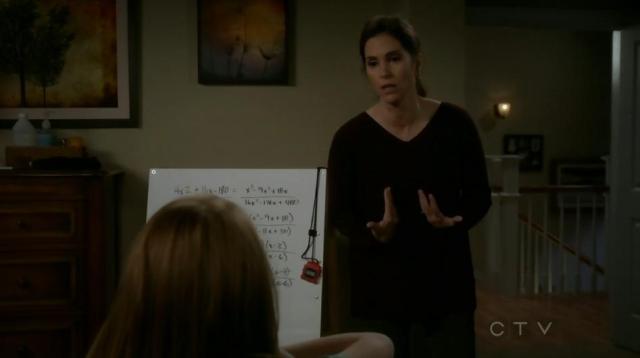 As the party progresses, Larry and Jackie are not overly impressed by the conversation. They cannot help but notice how shallow and self centered all of the teens are. They find Amber sitting on her own in the hallway. Larry is confused. How is it that the worst people they have ever met seem to be the most popular?

Amber replies, “interesting people are never popular”. This gives Larry and Jackie the reason they are looking for as to why they do not have a multitude of friends. They are far too interesting, of course. 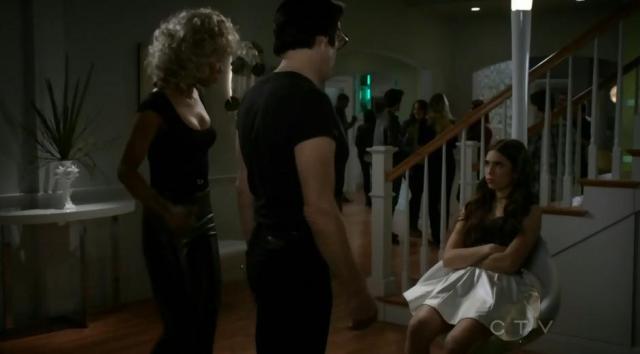 The important point of the episode occurs when Larry and Jackie learn from Amber that Grease is a bad movie because of its message; that the lead, Sandy, changed who she was to win back her boyfriend. Jackie then points out that this is exactly what Amber has done to win back Reggie. 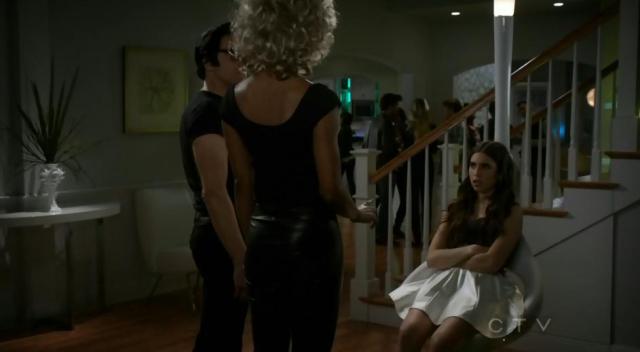 The solution is simple: Amber dresses down. She takes off all the glamour and puts in her retainer. She even applies her zit cream. This is who she really is, she tells Reggie. Reggie gets to make a choice. He can pick Jane and all the popular kids, or he can go with Amber in all her plain glory. Reggie does the right thing and chooses Amber. 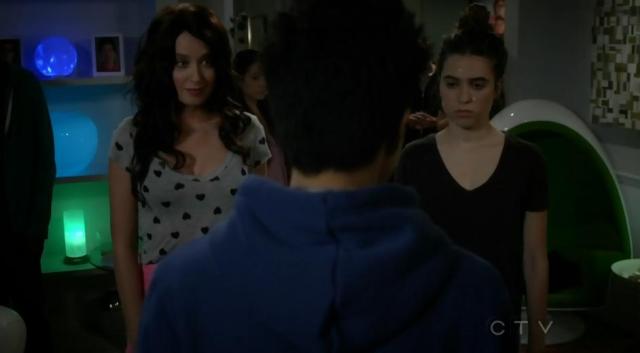 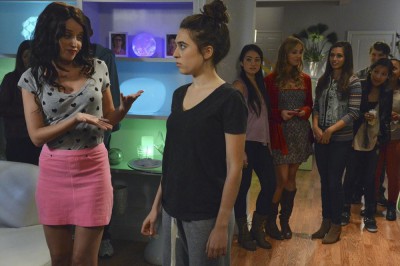 It is time to get rid of all the terrible people. Reggie seems to very much enjoy telling them all that the party is over, “Get out!” This is fine with Jane. She picks one of the jocks as her boyfriend which seems to make him happy. It looks like she will be around indefinitely. Do the aliens now have a nemesis?

Debbie has a huge argument with Dick. He makes her admit that she is afraid she will fail and that her kids realize that they do not need her any more.

Personally, with the way that Marty is mothering them, I think she has nothing to worry about. When she takes a break to see how her kids are doing, Max and Abby tell her that their dad is no mom. They also tell her they want her to have it all – to be a Kelly Rippa. 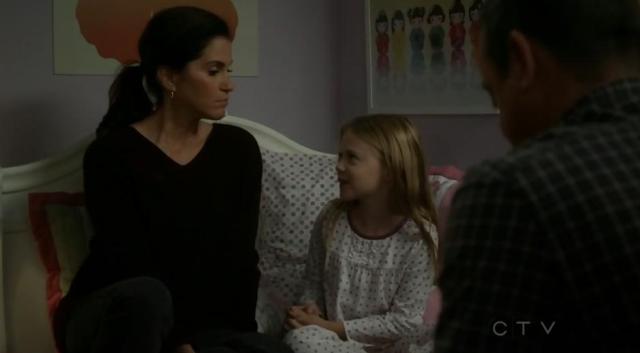 Later, we discover that Debbie passed her entrance exam. There is excitement and celebration all around. That is, except with Dick, who believes Debbie failed and therefore he failed. Poor Dick. He obviously got much more emotionally involved in Debbie’s studies than everyone expected. Perhaps he should stay away from tutoring as a side job. 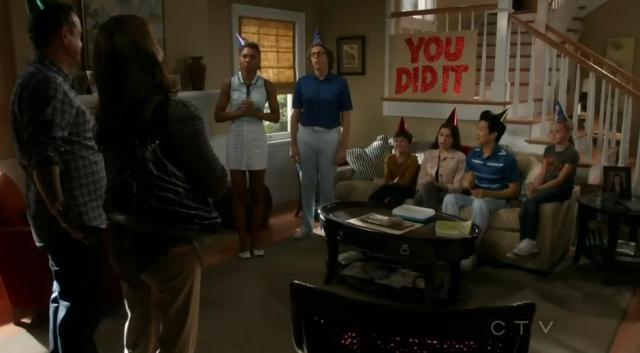 Despite the fact that this was a funny episode with some very good scenes, I am a bit disappointed that Amber and Reggie still need to prove themselves to each other. All of the silliness could easily be sorted out by a straight forward comment by each of them to each other, that they are not interested in anyone else. Hopefully now, at the end of this episode there is no longer any doubt and we will not see Reggie or Amber agonize over their relationship in future.

Best lines during this episode:

Larry: “This is like an immigrant father’s dream that one day his son will have more friends than he does”.

Reggie: “I think your parental involvement will make my party even cooler”.

Jackie: “How are you going to win Reggie Jackson back? Big musical number…car race”.

Amber: “You guys gotta stop with the Grease thing. That movie has a terrible message. Sandy changes everything about herself just to get a guy.”

Larry: “Who knew that a movie from thirty years ago about teenagers from fifty years ago could be so relevant today.” 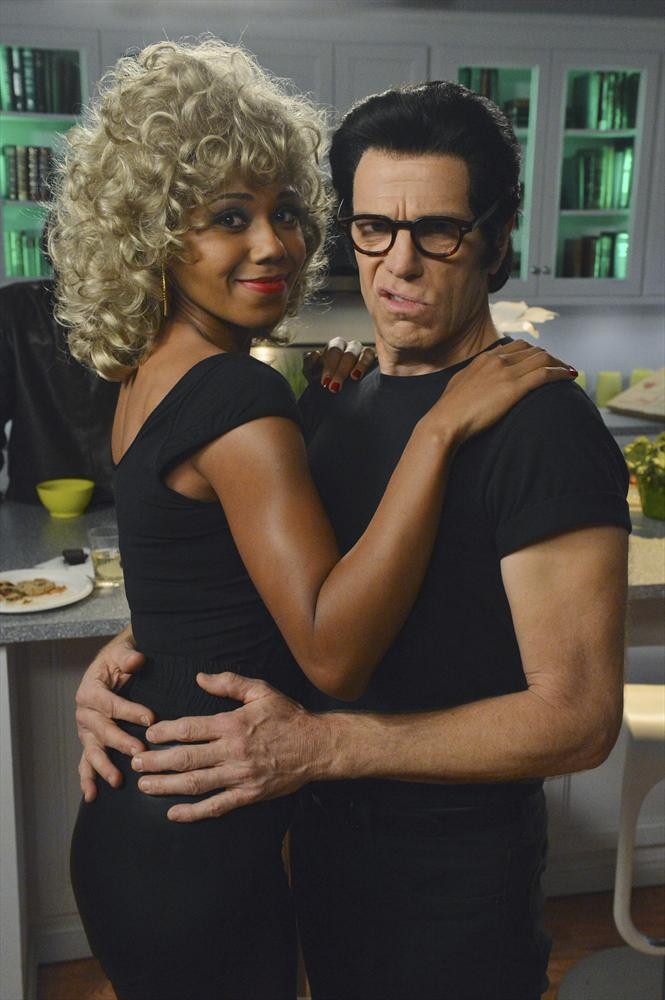 RSS feed for this post (comments)
Previous Post
« The Neighbors: We Jumped The Shark (Tank) or, “Sharks, I’m Webbie Deaver”
Next Post
The Neighbors: Thanksgiving Is No Schmuck Bait None Was Too Late! »
Avatars by Sterling Adventures
The Neighbors Our Alien Zabrvonian Analysis
The Neighbors Theme designed by Team WHR