The creators, producers and writers of The Neighbors should be justifiably proud of themselves as they reach the midpoint of Season 2. This is truly a family comedy with great family values. It is funny and quirky .

Further, it is a show with a positive message. The characters often learn a valuable lesson and are great role models for the rest of us. It is a series in the tradition of historic comedies that were funny for all the right reasons. Comedies that do not insult another character, and comedies that do not cater to the basest urges in humanity. 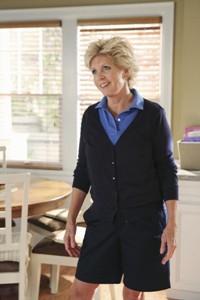 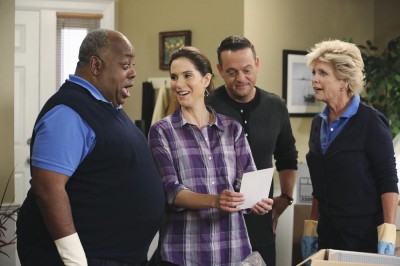 This episode was most ably written by Isaac Aptaker and Elizabeth Berger and was superbly directed by Jann Turner.

There is flooding at the Weavers. I was expecting them to have a basement. It is not a basement, however, but a room they are using for storage, which Debbie hopes will, someday, become their home office. That means they have a house with potentially five bedrooms. I am jealous.

That is a very large house. Anyway, the kids are just not in to helping with the clean-up. They have far too many more important things to do. Marty (Lenny Venito) and Debbie (Jami Gertz) look less than impressed. 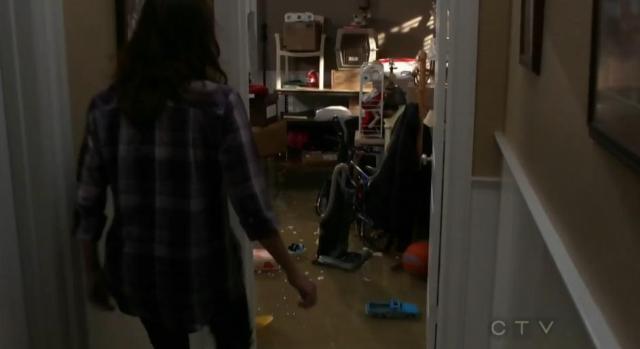 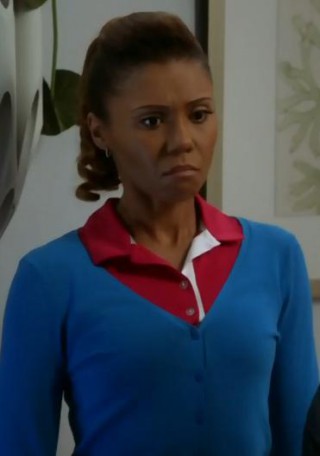 At the Bird-Kersee home, Larry (Simon Templeman) is printing out more resumes. He must be doing something right, because he is actually getting interviews. I would love to get a look at what he is using for previous experience and education – University of Galactic Domination, anyone?

It turns out that Jackie (Toks Olagundoye) plans to take her parents on a tour of her favorite places on earth, including her favorite parking lot. This upsets Larry, since he considers that parking lot their special place.

In fact, he is so annoyed, that he tells Jackie he will not be picking up the pieces when her parents run off on another charitable crusade.  Jackie looks quite downcast at that comment. Jackie’s parents are played by the wonderful actors, Meredith Baxter and Reginald VelJohnson.

Naturally, at the mention of Jackie’s parents, they show up just in time to berate Larry about his lack of success at finding a job. Larry defends himself by telling his in laws that he has applied for CEO positions at some very prestigious companies. 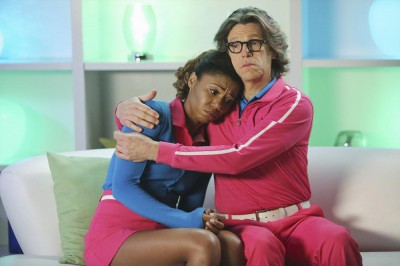 The parents get it; Larry is aiming a little too high. Perhaps he should start at the bottom, like everyone else. Larry, completely sure of himself, walks out the door in his pajamas declaring that the next time he walks through the door, he will have a job.

Larry chooses not to use the door when he realizes he is not quite appropriately dressed. I expected him to return through the door with an appropriately funny yet arrogant response. The fact that he used the window was unexpected, and, therefore, funny. 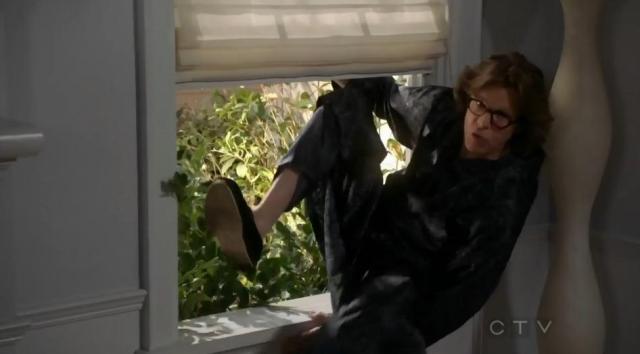 It was also nice to see Larry tell a joke at one of his interviews when he was asked to describe himself in three words. His response was, “not good at counting”, then he provided us with a big smile. It is so nice to see grumpy Larry smile. It happens so infrequently on The Neighbors.” 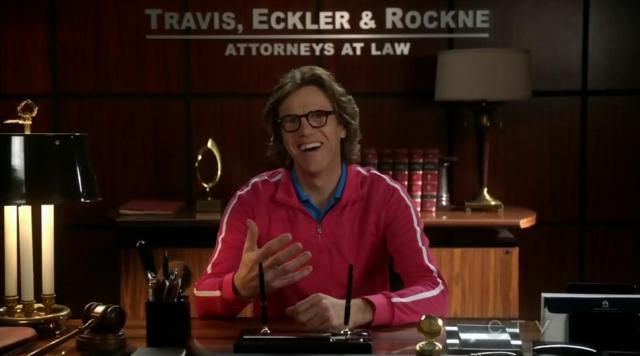 As usual, as soon as Reggie Jackson (Tim Jo) and Amber Weaver (Clara Mamet) get together, Reggie discovers something to worry about. Amber has interesting stories about things that happened to her before the two of them met. So, Reggie worries that he has no stories to share with Amber. Did he do absolutely nothing on Earth or on his home planet before he and Amber met? 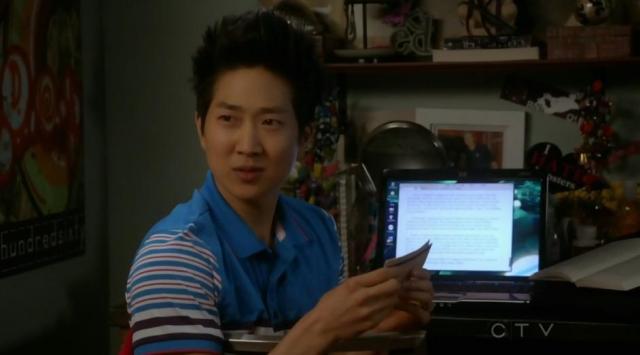 While Jackie is sharing her plans for the day with her parents, Dick (Ian Patrick) asks to come too, but has trouble tying his shoe laces. I find this hard to believe since, in the previous episode, Dick brags to the Weaver kids how much smarter than them he is. Fortunately, Reggie arrives and asks Dick to be his sidekick in his endeavour to create a story he can share with Amber. 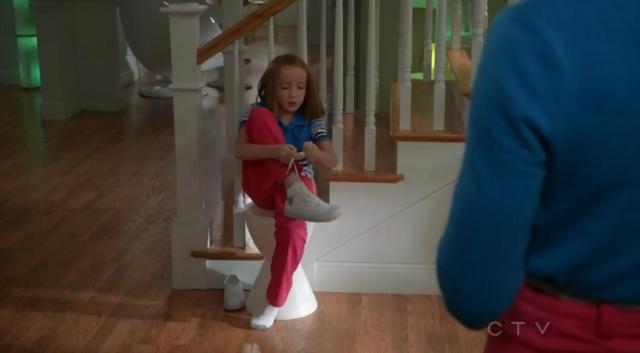 Mom and Dad Kersee also learn that the Weavers have had a flood. They immediately forget about Jackie and rush over to help the Weavers. We know that this will not end well. We also discover that poor Marty and Debbie have not had very good experiences with their parents. Naturally, Mom and Dad Kersee are the dream parents that everyone would love to have. This causes a few problems with Jackie, who is beginning to feel as if her parents have abandoned her. 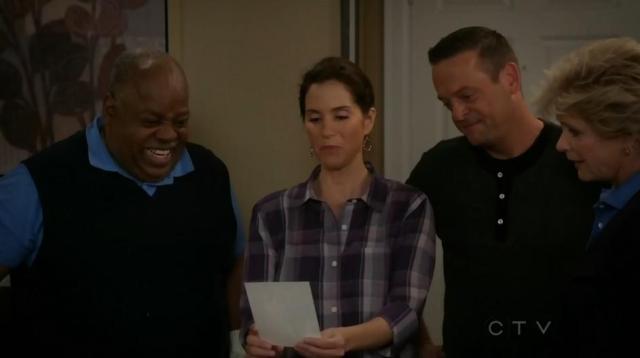 Meanwhile, Reggie tries skinny dipping in a kiddy pool so that he will have a story to tell Amber, and Larry has arrived at a coffee shop used by a bunch of unemployed young people who spend all their time on their laptops and not looking for work. Larry’s first reaction is that he has found, “My people”. 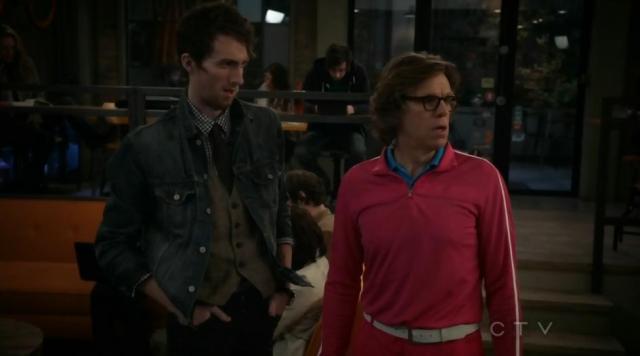 There is always a snag when things look too good to be true. As Larry finishes creating his own blog, the trial period on the free wifi ends. It is time to purchase a muffin if he wants more wifi. Larry does not like the rules, so he grabs the jar with the wifi password slips and flings them in the air. This, of course means that the manager gets summoned. Larry’s new friend, Raffi (Dustin Ingram), covers for him offering the manager a credit card to buy a round of lattes. Larry makes the discovery of the day – like him, everyone else in the place is a spoiled rich kid living off their parents. Larry was right – they really are his people. 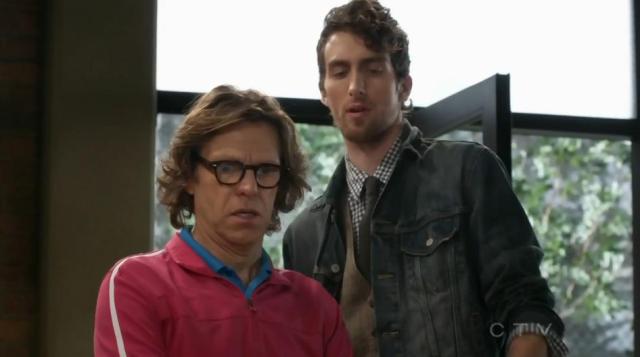 Larry has learned his lesson. He is ready to do anything for the manager of the coffee shop, including start at the bottom.

Reggie, for his part, has found something that will work. He stands on the roof of his house, ready to fling himself off. Amber arrives just in time to talk him out of breaking his neck. He tells Amber, “I have nothing to tell you and I’m afraid you’ll get bored of me”. Amber replies to him, “This right here, me talking you off the roof, this counts as a crazy story”. 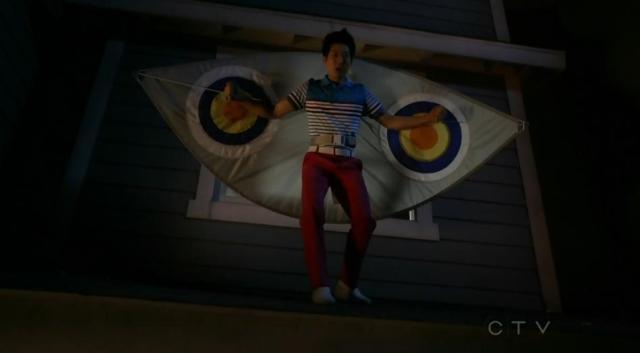 It is just about at this moment that Mom and Dad Kersee realize they have forgotten their own daughter. When they catch up with her at the mall parking lot, they apologize and tell her, “when you have the world’s most capable daughter, it’s easy to forget that she needs you too”.

Sadly, mom and dad have to leave to help clean up a mess somewhere else in the galaxy. When Jackie returns home, she shares a moment with Larry about four cars at once at the intersection. So sad that Larry missed the excitement. 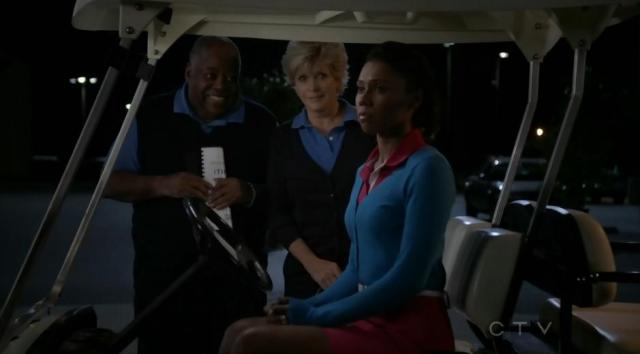 It seems that Reggie’s overall theme is one of self doubt. It seems that he feels he can never measure up to Amber’s needs and desires. Amber has a few issues as well, but in this episode, the lack of self esteem is all Reggie’s.

I felt sad for Marty and Debbie and their lack of good parents. I think that many people can sympathize. It gives us all the more reason to be good parents, ourselves. Thus, this show continues to remind us what is important through humour and role modeling the behaviour that helps us all to be better people.

Larry: “I am looking for eight figures. I want them all to be a seven”.

Larry: Describe myself in three words? Not good at counting”.

Dad Kersee (To Marty): “Call me by my Zavbronian name. It’s Daddy”.

Reggie: “As Miley Cyrus taught me, you don’t get a good story by keeping your clothes on”.

Larry (to Raffi): “You lazy, self entitled trust fund brats”.

Jackie: “Humans get a bad rap sometimes. But I’ve found that, more often than not, they manage to look out for one another. And come through for each other, when you least expect it”.

Larry (to Jackie): “Picking up your pieces is the only job I do for free”.

Thanks to Kenn for final staging of the audio video embeds and images in this news article and thanks to you for stopping by WormholeRiders News Agency!! We look forward to seeing more of you here at our review site dedicated to our wonderful aliens friends known as The Neighbors! Please feel free to leave a comment here, click an icon below to share this interview with your friends, or you can visit and follow me on Twitter by clicking on my avatar to the right.