Having watched the newest episode, “Bathroom Etiquette” I continued to enjoy the wonderful science fiction comedy series and writing reviews for the team  WormholeRiders News Agency.

Based on ratings, The Neighbors is holding strong at an 1.9 with 6.53 million viewers, a healthy number for a half hour series. Without “Modern Family” as a lead in, ABC now has this great program as the lead in program for Modern Family!

This scheduling move by ABC indicates the network remains excited about this new series. How do we know? ABC has just ordered three new program scripts for The Neighbors! While ordering scripts does not directly translate to a series renewal, such is a healthy indicator of a potential for a second season!

For your Enjoyment, we include the promotional trailer for the next fun episode of The Neighbors courtesy of the great folks over at the ABC network! 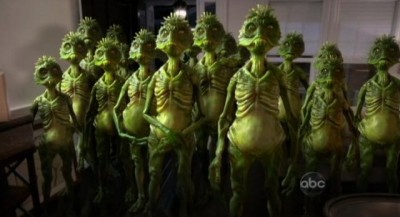 It is the fourth episode of The Neighbors, and, so far, this show does not disappoint!

As the Weavers get more and more comfortable in their new surroundings, odd behaviour from the neighbors is not quite as much of a concern as it was when they first arrived.

That is, until the first day of school. The Weavers, especially Debbie Weaver (Jami Gertz) gets modern school culture completely wrong. 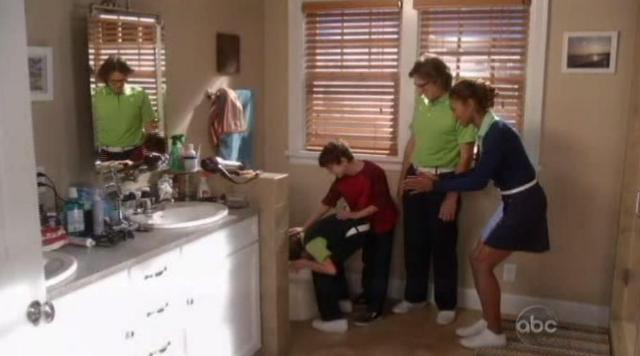 This episode begins with Debbie and Marty arriving home from grocery shopping, only to discover that Larry Bird and Jackie Joyner –Kersee (Toks Olagundoye) are supervising Dick Butkus (Ian Patrick) getting some practice in as the victim of bullying. We learn that Dick has the capacity to hold his breath for a really long time, “three minutes that time, and I didn’t even cry!” 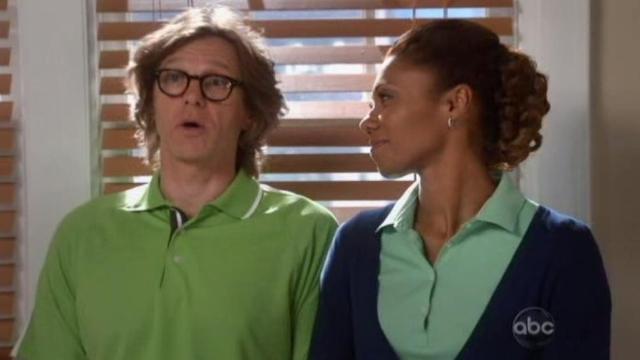 Another alien behaviour that really seems a bit bizarre is explained by Larry Bird (Simon Templeman). Apparently, they educate the young on their planet by feeding them the brains of their elders. This creates an enormous advantage, obviously, giving the parents ample time to nurture their children. Awesome – not!

Naturally, Debbie’s first instinct as a mother is to show off her vast knowledge about parenting and her understanding of the culling of the herd that often takes place as the offspring are released into the wilderness that is the neighborhood school. Marty (Lenny Venito) completely backs her up. 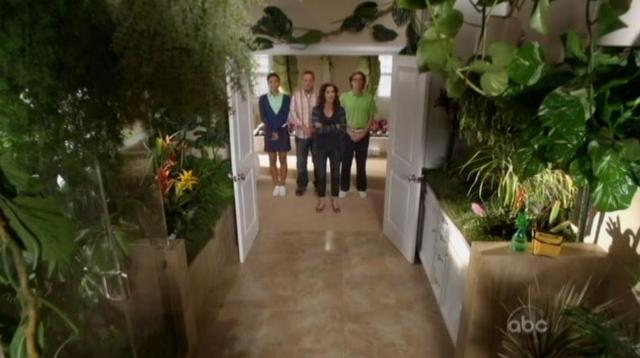 Larry Bird is skeptical. His best line of the episode and the statement that really made me think was, “it’s true, Marty. We grow gardens in the room next to our sleep chamber, you keep a sewer there. Yes, I guess we are the crazy ones.”

The morning of the big day, Debbie wants everything to go well. So much so, that she is preparing lunches, not only for her own three kids, but for Dick Butkus and Reggie Jackson (Tim Jo) as well. Marty warns her that it is not wise to attempt to tell other parents how to raise their kids, but Debbie is having visions of Oprah in her head. We know at this point that things are not going to go well.

At the Bird/Joyner-Kersee home, Jackie is cleaning the plants out of the bathroom. If they are going to live among humans, they must act like them, she says. Larry seems to not think very highly of the Weavers. I am certain that this will be a recurring theme throughout the series. 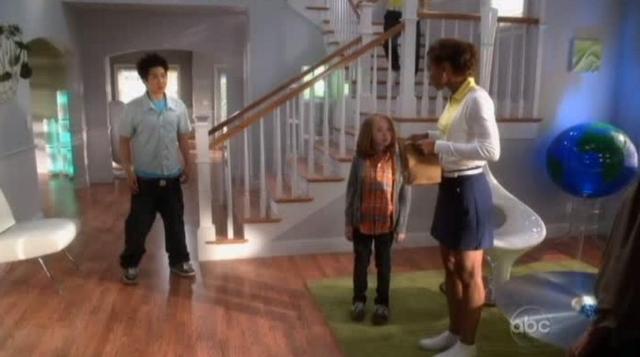 The alien kids are ready for school. Reggie Jackson wants to know if his denim trousers are sagging properly. Fortunately for everyone, Larry demands that he pull up his pants, “we do not need to see your anuses”. See, kids? Even the aliens think droopy drawers are a bad look.

Just as Debbie gets through explaining the horrors of the first day of school to Larry, Jackie, Dick and Reggie, she is summoned upstairs by her own eldest, the teenager from the black lagoon… Amber(Clara Mamet) is sporting the nightmare of all teens, a rather large pimple. What a tragedy on the first day. She will be scarred forever. Like Larry Bird, I think I am getting the hang of this sarcasm thing. 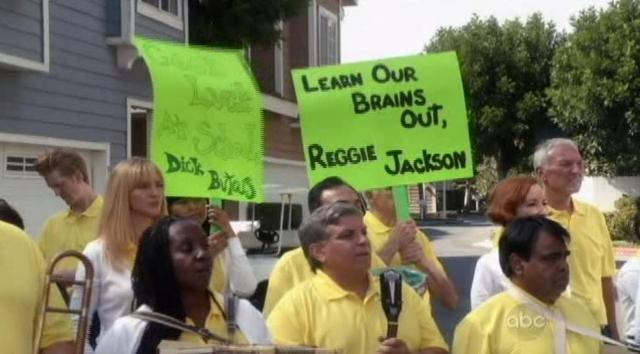 Outside, the entire neighborhood is there for Reggie and Dick. Now, this I would love. I could get used to my own cheering team. Of course, this is one more example to Debbie and Marty that Larry and Jackie are doing it wrong. On earth, teens do not want to be seen around their parents at 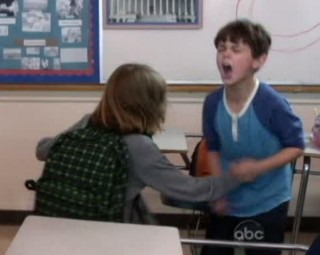 school, but where the aliens come from, “we are proud to show affection. In fact, every year, there is a festival of hugs, followed by a carnival of compliments.” Yeah, on earth, I’d say, we’re doing it wrong.

After Debbie’s quick rundown of the coming events at Polk Elementary School for Dick Butkus and her two kids, Max (Max Charles) and Abby(Isabella Cramp), the actual situation progresses in a somewhat different way. Dick gives Max a punch in the gut. According to the bullies, “the new kid just got beat up by the redheaded girl”.

It is a new experience for the Principal of the elementary school. She has never had to call the parents in on the first day, and within the first half hour. Larry, of course, is delighted, “Apparently, the Weavers don’t know everything about everything after all. Dick Butkus is the victor, and Max Weaver is the feeble one.” Dick did not want to be, “seen as the weakest, thus tormented, wedgied and hate-crimed”. Dick’s rationale makes perfect sense. However, he, too, is wrong. The principal is surprised that the new kid would have this opinion. With the promise of detention, both families depart.

Meanwhile, at the high school, Amber is still working on a plan to get up close and personal with the top jock. Reggie arrives with the disturbing thought that the other students are not interested in learning anything. Sadly, his view is accurate. 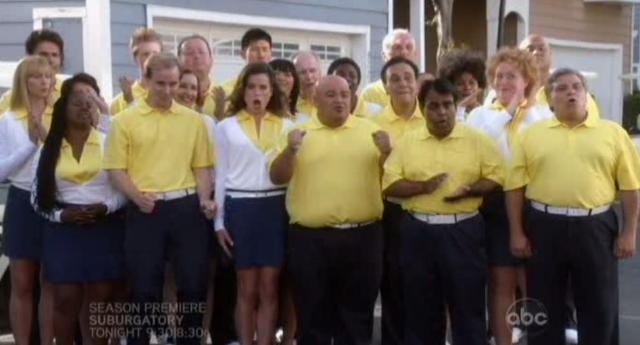 At home, Jackie confronts the Weavers. She lets them know that she does not think she is a bad parent, despite how they feel. Naturally, the community cheering section has arrived to voice her actual feelings. Outed by the team. The Weavers insist that Larry and Jackie raise their kids according to human rules or they will not permit their kids to spend time together any more.

Larry and Jackie do not seem to have a problem with that. Neither does the cheering section. Debbie’s last comment to Marty before returning to the house is, “you could cheer for me once in a while…” 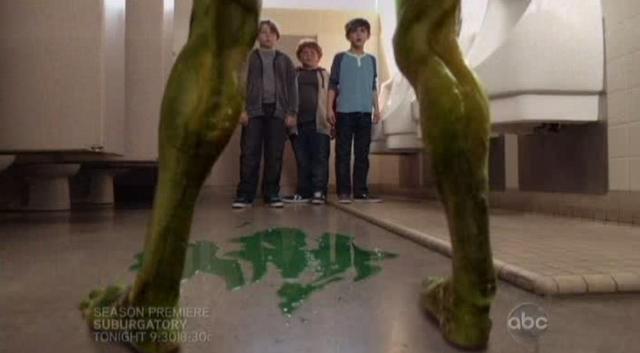 At the elementary school, natural child behaviour has progressed as expected. The bullies are attempting to stick Max’s head into a urinal. Dick Butkus to the rescue. He orders them to stop. When they do not listen, it is time for more extreme measures. 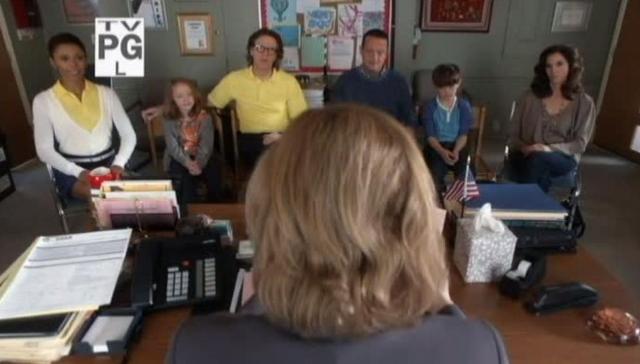 It is a little after 1PM and the principal comments that they are breaking new ground today. The Weavers, the alien family and now the families of the two bullies are all in the principal’s office. Larry, of course, misses the point, “my son has been called to the leader’s lair twice. It’s a proud day, indeed.” 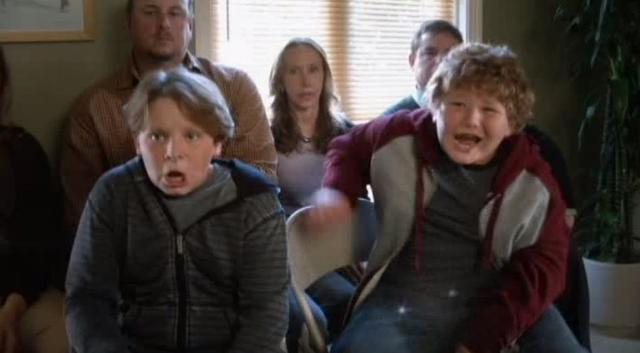 The other kids tell everyone that Dick came into the bathroom and turned green. Fortunately, no one from the “normal” community believes them. As soon as Dick demands to know why they are lying, the two react in a rather startling manner. They freak out. It is probably safe to safe that the bullying problem has been resolved.

The strangeness of Larry and Jackie is not going over well. The principal is now wondering if the school is a good fit for Dick Butkus. To Jackie, this means that she is being accused, yet again, of being a bad parent. The Weavers come to the aliens rescue, “they are great parents, it’s just that they are from another planet…country.” 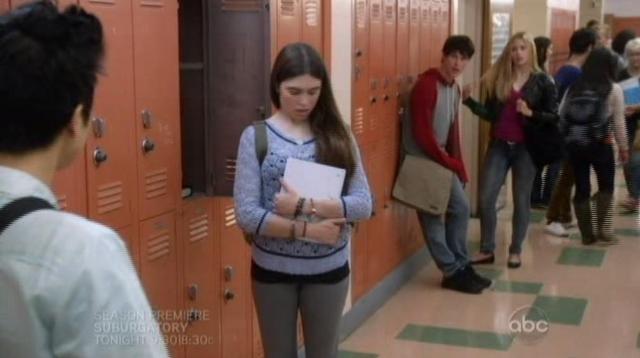 Back at the high school, Reggie Jackson does something noble. He follows up on Amber’s earlier explanation of how she became popular at her other school. He yells across the hallway, “you broke my heart, Amber Weaver! And how do you repay my love? By having an affair with a major American celebrity! I gave her everything! And, all the while, she’s having a romantic tryst with televisions, Alan Alda! “ Even if the nasty blonde who insulted Amber as she entered the school for the first time, is not impressed, apparently, the lead jock is. Amber gets invited out to the local hangout. What a friend. Amber so owes Reggie Jackson. 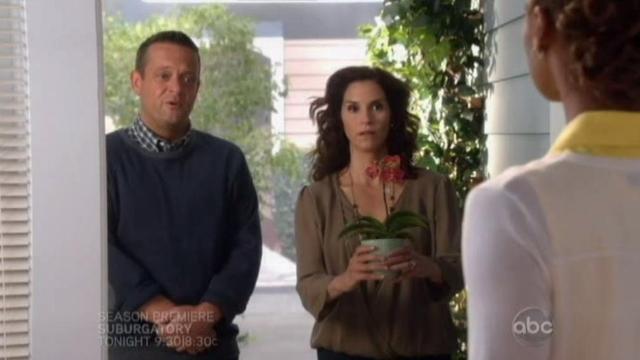 At home, Debbie and Marty arrive at Larry and Jackie’s house baring a gift – an orchid. It is a peace offering. Everyone agrees to be a little more accepting of the other family. It is a beautiful moment. Then comes the punch line – the first day of Dick’s suspension. 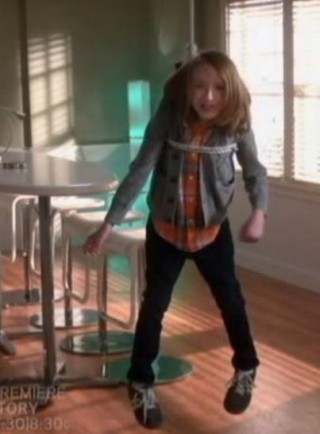 I really like this show. It has great promise. I do hope there is some focus a little later on the other alien members of the community. I am sure that they also have their problems.

As well, I would like to see Larry’s group solve the really big problems. I am sure that they have some amazing ideas to help mankind. Perhaps they attempt a solution only to have it backfire.

What would they think of some of our films and television shows about aliens? How would they react if Mr. Spock from Star Trek, or Ba’al from Stargate SG-1 showed up on their doorstep?

There are lots of possibilities for this series. I look forward to the next episode.

Comments (3) on “The Neighbors: “Bathroom Etiquette” Reveals the Aliens at Our Schools!”