Welcome back to alien analysis about The Neighbors!

You would think that, with this title, the episode is directed at Jackie Joyner-Kersee (Toks Oladundoye). However, in many ways, it is a continuation of Jackie’s long suffering regarding Larry (Simon Templeman). Over the past two years, we have learned that Larry is a bit self centered, somewhat arrogant, and more than a little egotistical. He is also more than willing to put all of that aside and place his family first when it really counts. 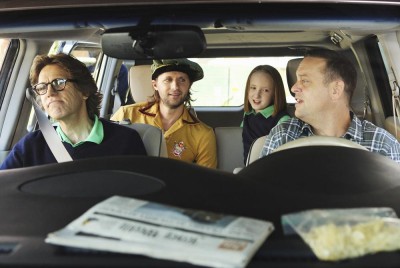 Debbie (Jami Gertz) and Marty (Lenny Venito) follow the same pattern. After a brief misunderstanding during the episode, they often relearn the importance of family and what they mean to each other.

The characters that seem to make the same mistakes over and over again are Amber (Clara Mamet) and Reggie (Tim Jo). Their poor timing when it comes to their inability to admit their love for one another is often painful to watch. Hopefully, after this episode, they will both move on with their lives. This episode was directed by Chris Kosh and written by Jeremy Hall. Congratulations to Mr. Hall on his third writing credit for The Neighbors. 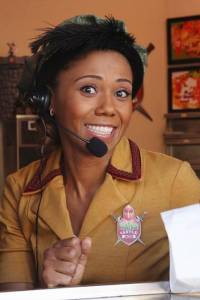 As Marty and Debbie prepare for another day, they get more unwanted training at being the parents of a teenager. Amber has decided that she now wants to avoid meeting Reggie on her walk to the school bus. Many of us cannot really blame her though. Her situation is similar to the office relationship that has not lasted. Many coworkers do not want to keep bumping into each other at work if they have just recently broken up. Fortunately for Amber, the problem seems to solve itself by the end of the episode. 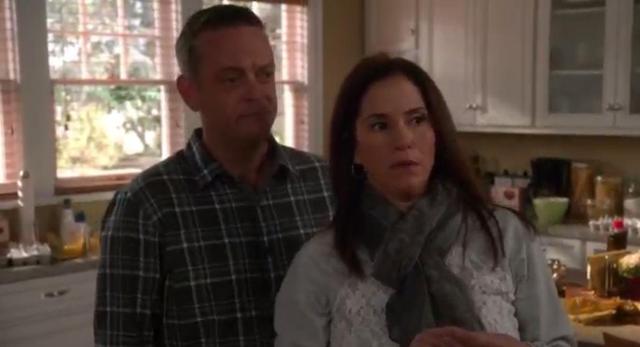 The real problem, this episode, is the loveable but very odd, Larry Bird (I just love this character). While he practices being aloof, Reggie enters with the same concern expressed earlier by Amber, but in a much more pleasant manner. Reggie is such a pleasant person, over all. Many parents would be happy to have him dating their daughters. 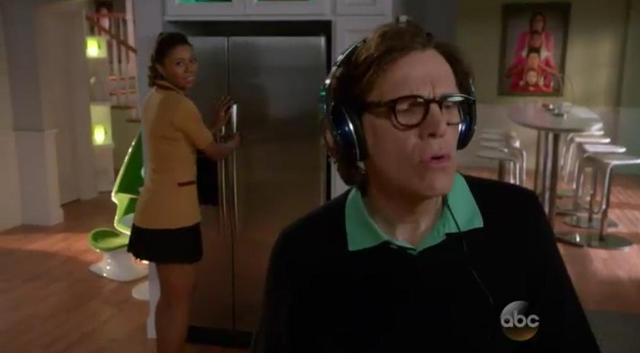 Anyway, Larry seems to catch on right away, when he demands to know, “Is this what humans do when they suffer a serious break up, they play hide and seek?” Yes, Larry, yes we do. 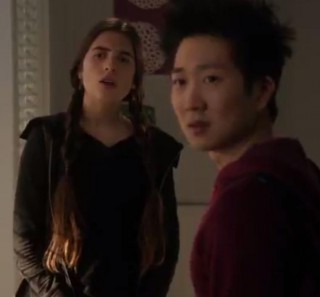 The cute thing that the writers have started doing in this show is to begin a sentence for a thought at one house and conclude it at the other house. For example, Jackie, apologetically tells Reggie, “I wish we could be more help, son, but I am afraid we are a little…” Then Amber, at her home, blurts, “…useless. You two are totally useless”. Very clever, writers.

Marty states the obvious to America’s parents, “It’s not all that rewarding, parenting. Is it!”

Amber decides to make sure that Reggie is aware that they are no longer a couple. Reggie, mistaking Amber’s appearance to mean that she wants to get back together, bolts over to the door, telling her he loves her. When faced with the truth, that is, Amber telling him they are done, Reggie tries to save face, by over explaining, only to come across awkwardly. Larry Bird attempts to deflect all of this by beginning to sing the theme song for The Neighbors. Clever. This is another instance where the writers/producers of the show have removed the fourth wall, inviting the viewers in to the world of The Neighbors. 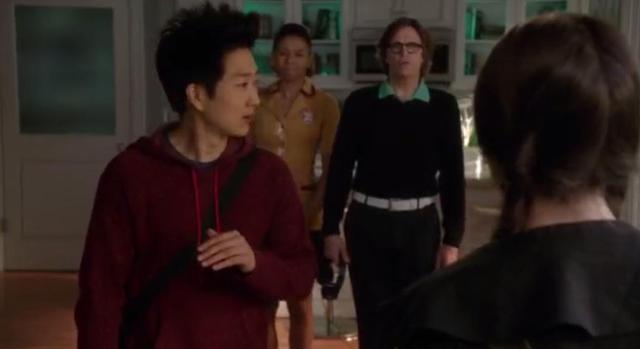 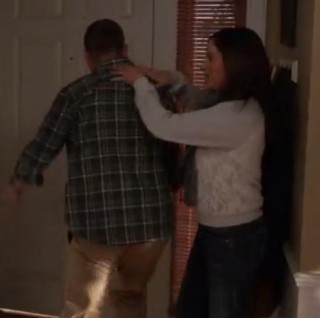 As the story progresses, Debbie has invited the other students from one of her classes home for a study group. She virtually shoves Marty out of the door. Is she embarrassed by him? She says no, but I think she is. Poor Marty, always the guy on the bottom.

Meanwhile, Larry has shown up at Jackie’s job simply because she has told him he never shows any interest in her and her work. So, here he is. Ignorance is often bliss, for, at this moment, Larry discovers that he is not the only adult male in her life.

After getting angry and wanting to punch something, Larry leaves the restaurant in a huff. Dick, worried he will be abandoned, hurries after Larry. 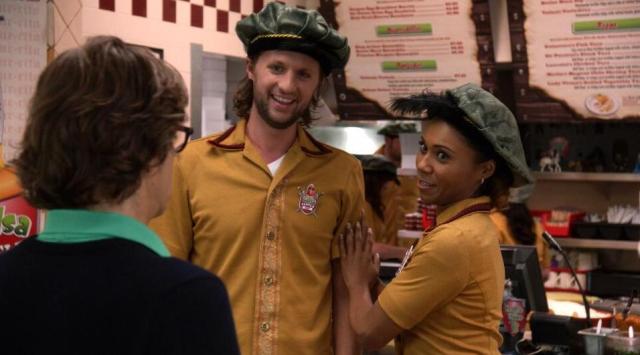 At home, Amber spends a moment mooning over Reggie. The writers of this series must be very familiar with Shakespeare’s, “A Comedy Of Errors”. I have mentioned this before in my reviews. It is his shortest and one of his most farcical comedies, with a major part of the humour coming from mistaken identity, in addition to puns and word play. Much of the past few episodes of The Neighbors have been about the misunderstandings of Reggie and Amber regarding their love for each other. 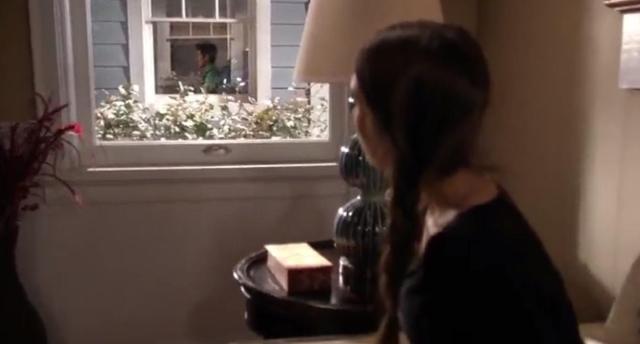 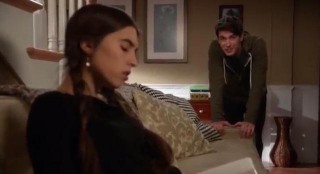 Enter the new guy (Travis Caldwell), one of Debbie’s study group who has taken an interest in Amber. This is perfect timing, of course, to find a hot new boyfriend to take her mind off of Reggie.

It seems that Marty is trying to reverse the aging process as much as Debbie. He returns to the house with a keg of beer and pizza so he too, can fit in with the younger crowd. He is rebuffed by Debbie who seems to not want him to rain on her parade. So he retreats to the bedroom. Fortunately, that does not last long. Larry, confused about his feelings, seeks counsel from Marty about how he has reacted to Jackie’s friendship with her, “work husband”. 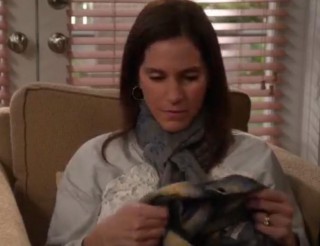 Debbie’s relationship with her peers is about to change. When one of them complains about a stain, she offers to remove it. This leads to everyone asking for help with their laundry. Her status has just changed to “mom”, or in this case, “Mrs. Weaver”. No matter how much you want to turn back the clock and return to the care free days of youth, it is not going to happen. We all learn that as we reach middle age.It seems that it was Debbie’s turn to figure this out.

Now the episode gets really silly, but also very fun. Marty, with Larry and Dick (Ian Patrick) as passengers, goes through the Drive-Thru at Jackie’s restaurant multiple times so that Larry can get a look at his wife. How Marty can eat as much food as he is eating in that scene is beyond reasoning, but equally hilarious. He also looks as if he is truly enjoying himself. 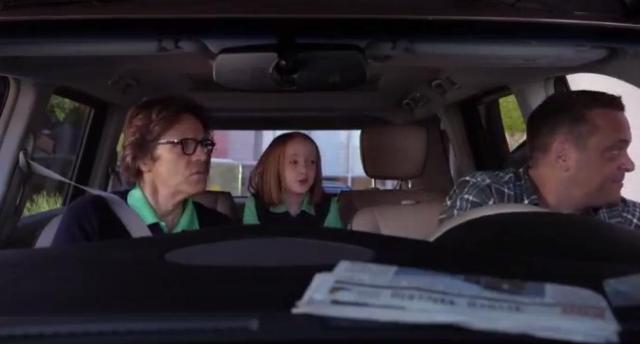 Larry takes matters into his own hands and kidnaps Keef (Ian Wolterstorff) from the restaurant. It is not much of a kidnapping because Keef’s hands are not bound and Larry has to wait for the automatic sliding door on the minivan to open. Larry had better not try to apply for a job with the mafia. They quickly get found out when Jackie appears at the drive thru window. 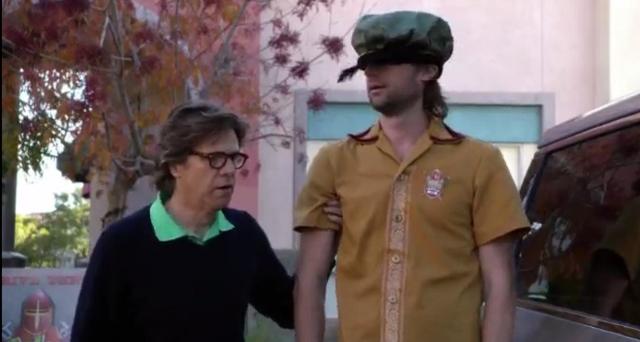 Reggie has a heart to heart conversation with his soul mate, Jane (Megan Park). Humans just do not make any sense. Hey, kid, we humans have known this for centuries. 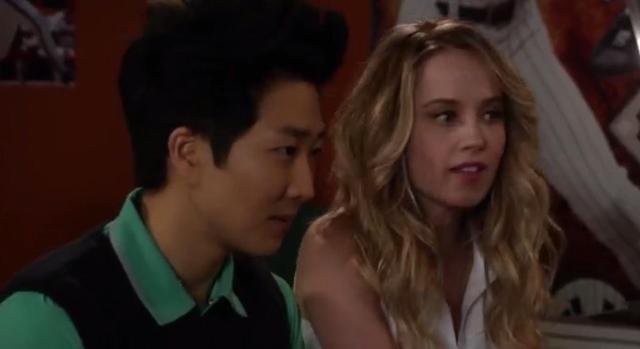 As usual, things are awkward. Reggie steps outside to have a deep conversation with Amber. He does not let her get a word in, which might have given them a chance to get together again, because, for one more time, Amber is willing to admit she was wrong, and accept Reggie. These two are at odds with their timing…again. So, this does not happen. Shakespeare would be proud. 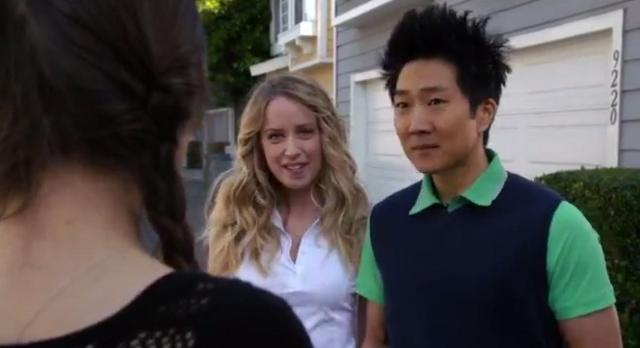 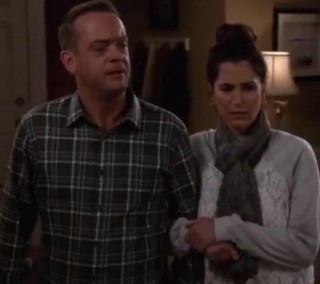 As one relationship finally ends…I hope, another one bets back on its feet. Jackie explains to Larry that he has no reason to be jealous of Keef. He is her soul mate. She even calls him a Maserati to Keef’s moped. Ouch.

Debbie apologizes to Marty for trying to be cool and pushing him away. She realizes that she is a wife and a mother and she is happy with that.

The episode finishes up with Larry and Jackie imitating the scene from “Ghost”. As Jackie tries to be more loving, kissing Larry’s finger tips, Larry does what he always does and reacts inappropriately. Poor Jackie. It is amazing that these two are soul mates. They seem so wrong for each other most of the time. Sometime, is seems as if the aliens referring to each other’s mates as soul mates is just another misguided attempt to feel superior to the humans. They seem to have as many problems in their relationships as do any humans. 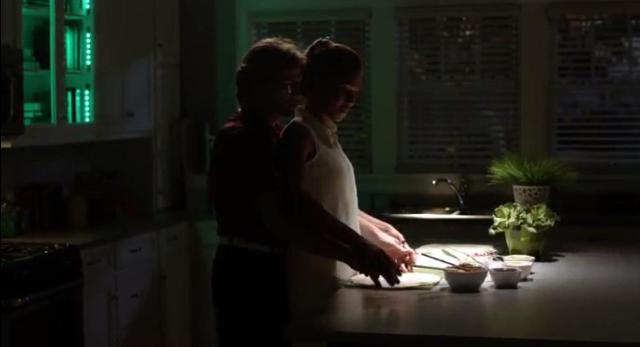 Jane: “I’m your soul mate, not a palette cleanser”.

Larry: “We’re just going to have a talk with this punk. Marty, you’re an Italian from New Jersey, where do I get rid of the body?” 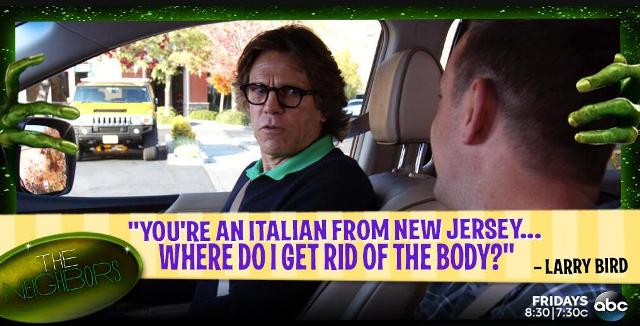 Larry: “Dick, I’m going to need a lamp and a car battery. Marty, do you have jumper cables? Keith, do you have nipples?”

Jane: “Isn’t it funny how unevolved humans are? The whole purpose of life is to find love and yet that is the thing that they are the worst at”.

Reggie (to Jane): “That and dancing. They can’t dance at all”.

Jane: “Right! They look actually worried that the rhythm is going to get them”.

Jackie: “Why would I go for a joy ride on a moped when my soul mate is a Maserati?”