Not only do we see the return of Larry’s father , the big bad leader, but there are some awesome guest stars, such as Rosalind Chao, Joel Stein, Lawrence O’Donnell and Bill Nye. 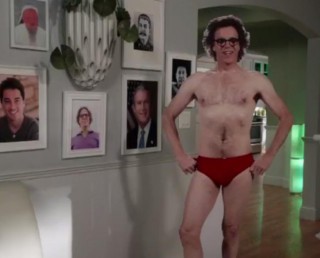 Of the three celebrities in the play house, Bill Nye does the best job at acting. I think this is because he has had more experience at it. After all, he has appeared in a number of popular shows such as, Stargate Atlantis, The Big Bang Theory, and Dancing With The Stars.

As well, most episodes of The Neighbors tend to be one offs. They do not have a, “continued next week”, arc. With the introduction of Joshua Sasse as the ominous figure, things have taken a turn for the spooky.

There have been hints throughout the series of the real purpose for the alien presence on Earth. Perhaps the next few episodes will give us more details.

Close Encounters of the Bird Kind:

Things are a bit odd at the Bird-Kersey house. When are they not? Jackie (Toks Olagundoye) has arranged photos of Larry (Simon Templeman) everywhere. There is even a bust of him and a huge stand up image of Larry in a very tiny bathing suit. I guess that, when you do not have to buy food, because you do not eat, you can save quite a few pennies. Then you can spend them on other useful/useless things. 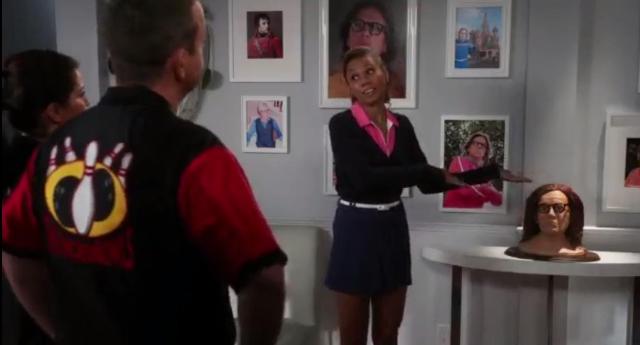 Anyway, it is the one year anniversary of Larry telling his father that the community is staying on Earth. This is an occasion worth celebrating…or not. There are complications, naturally. Larry is worried about how this past year will be seen by his father. This is affecting his performance in the bedroom – limp hair. 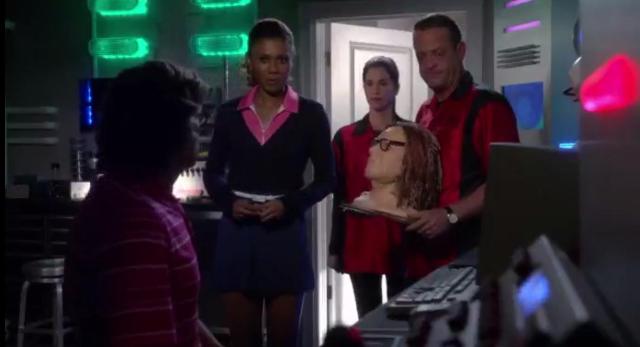 You have to feel a bit sorry for Dick Butkuss (Ian Patrick). He is, after all, much smarter than his young friends, Abby (Isabella Cramp) and Max (Max Charles) so their antics are wearing a bit thin. His solution is to part ways, so he goes so far as to draw up a contract outlining how their divorce of friendship shall be accomplished. 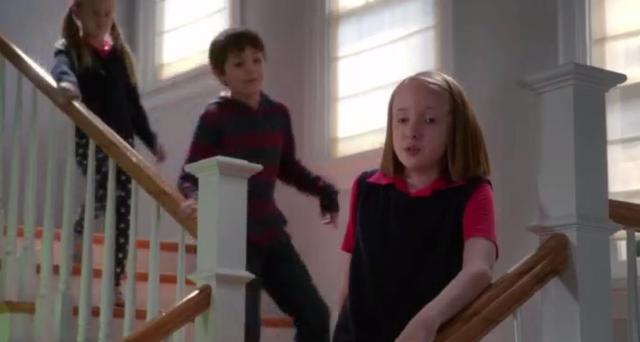 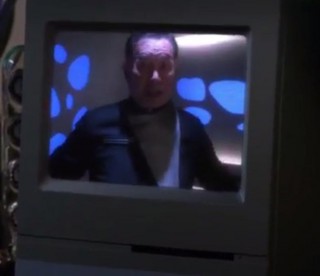 In the garage, Larry is having an unhappy conversation with his father. Daddy (George Takei) is not happy with Larry’s lack of performance…on Earth, not in the bedroom. If Larry cannot fix this problem then Daddy will send someone to clean up his mess. Oh, my!

While Debbie (Jami Gertz) is being terrible at bowling, and Jackie is having a chat with a new friend (a therapist) at the bowling alley, Larry is at home demanding progress reports from some of his minions. They have nothing useful to report. I wonder what sort of jobs they have come up with to keep the community going. 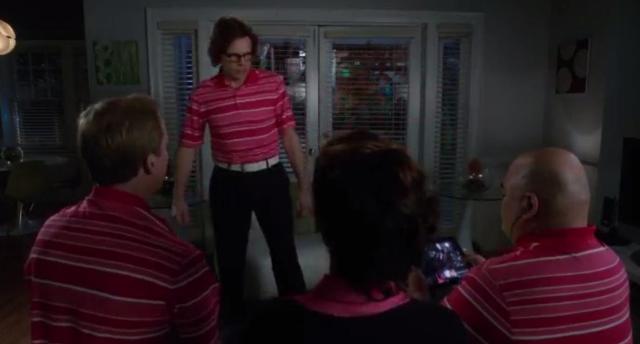 Arriving home, Marty (Lenny Venito) does not seem to be as up as Debbie is. He has been told to kick Debbie off the team because the others actually would like to win a game from time to time. Marty suggests that they quit bowling. He does not get very far with that train of thought because Debbie derails it with her desire to mess around upstairs. Larry gives in without much of a fight. 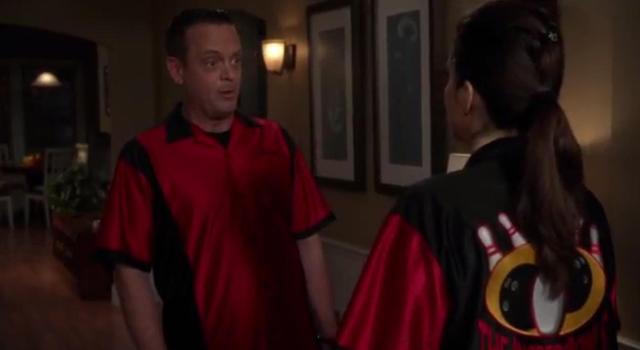 Jackie does her best to share her concerns with Larry, who does not seem to be paying much attention to her.  To be fair, Larry does have a great deal to worry about thanks to the threat from Daddy. 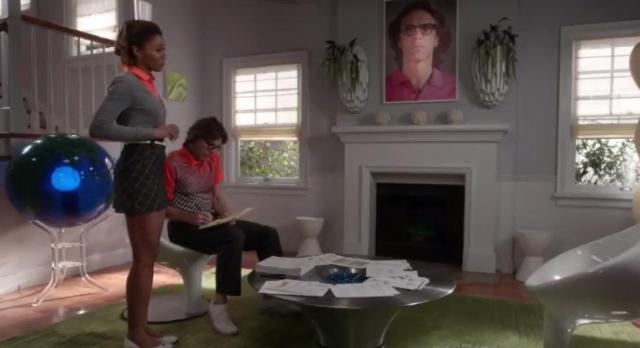 Jackie, rebuffed by Larry, goes to visit the therapist at her office, Dr. Barbara Hartley, played so well by Rosalind Chao, who also happens to be the real life wife of our favorite alien father, Simon Templeman. Poor Jackie feels that no one listens to her. 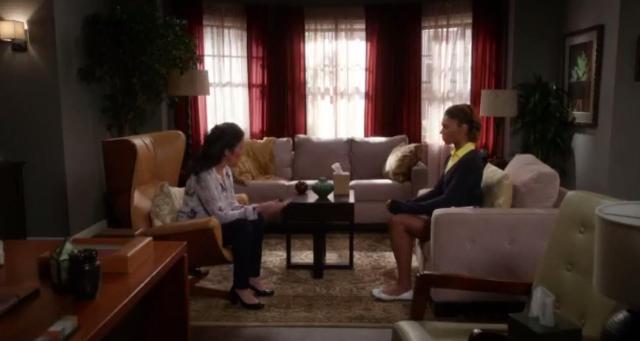 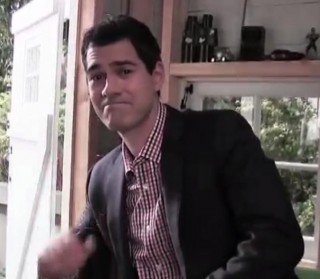 How Dick managed to get them to show up remains a mystery, but as Dick continues to film his “show”, Bill asks a pertinent question, “Is this a real t.v show?” To which Dick gets the punch line, “My friend, I have been asking myself that question for two seasons”. For those who were not sure, Dick’s reference is to The Neighbors. 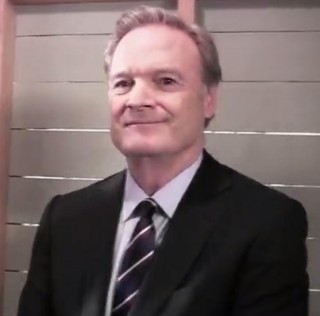 Marty and Larry pace and mumble in the back yard. They both have problems that need fixing. Fortunately, as friends, they are there for each other – sort of.

When Larry tells Marty that his father is going to take his family away, Marty comments that Reggie (Tim Jo) dated Amber (Clara Mamet), so must have learned a lot from that. Larry suddenly realizes that this bit of wisdom might be helpful, “Shut-up. You finally had a good idea. Don’t ruin it.” 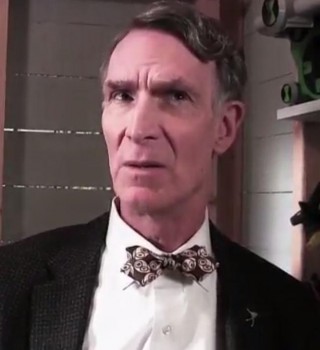 To repay the favour that Marty has just done, Larry tells Debbie, “You’re kicked off the bowling team because you stink. Don’t bother to thank me. Bird out”. This may not end well.

In therapy, Jackie admits that, although she can do whatever she wants, what she really wants is to feel like she belongs somewhere, like somewhere is home. With their future up in the air, thanks to the Larry mess, this may now be impossible. A decision is reached and Jackie agrees to tell Larry about it. It sounds ominous.

Reggie shares the details of what he has learned about dating a human female with his Grandfather. It does not go well. Grandpa is not amused. Time to send…him! This dramatic exchange is followed by, “Kisses to Jackie, tell Dick and Reggie Grandpa Snuggie loves them”. 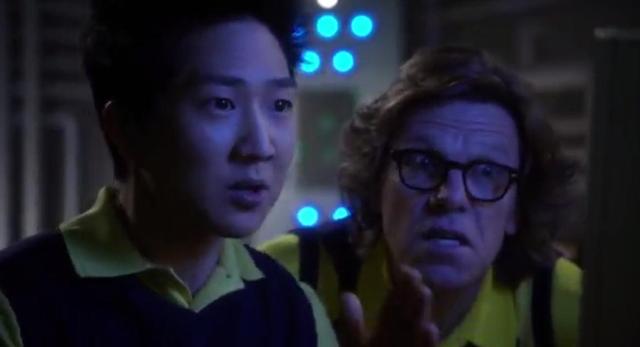 Dick is taking a break from the three way conversation of his television guests. Abby and Max are feeling a little low and share that they miss Dick during their antics. Dick concedes that he misses them too. Time to make use of the water balloons. 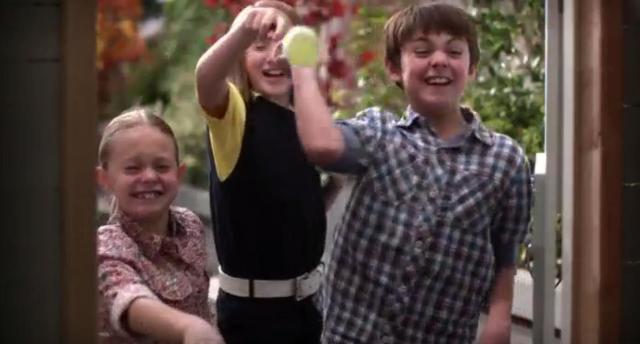 Debbie and Marty both return to bowling to the surprise of their team mates. Debbie tells them that she will now concentrate on bowling, so, no more fun. Winning is the only thing. This does not improve her game. To the song, Eye of The Tiger, we are treated to gutter balls and one ball that even goes the wrong way. Poor Debbie. 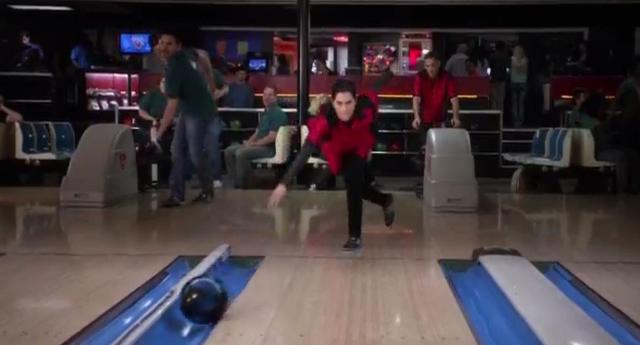 Marty makes everything right when he notices that Debbie is no longer having a good time, and that her score has not improved. So he tells her he loves her dancing around the alley. That is what is important to him. Happy again, Debbie does her dances. As she picks up her last ball, Marty leads a cheer for her that the rest of the team get involved in. When Debbie rolls the ball, it looks like it is straight down the middle of the lane.

The Weavers burst into the Bird-Kersee home to announce that Debbie sucks at bowling but it was still lots of fun, just after Jackie drops a bombshell on Larry. She wants to have another baby. All Larry can manage is a groan. 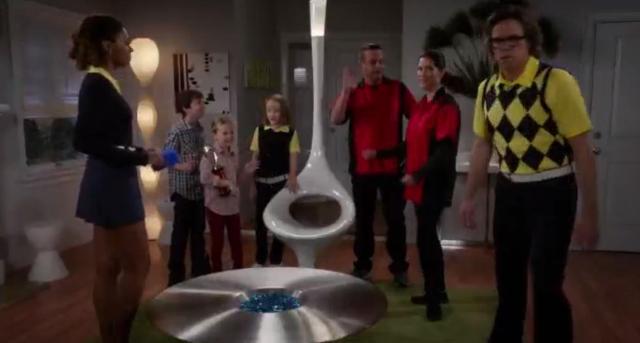 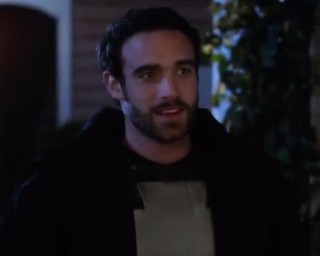 The person who is supposed to clean up Larry’s mess has arrived. He announces, “I’m here.” Larry replies, “I’ve been expecting you, brother”.

Marty: Woah, that is a lot of Larry!
Debbie: Ooh, and not a lot of swimsuit.

Jackie: His anxiety is even affecting his performance in the bedroom.
Debbie: Oo-kay.
Jackie: Oh, no, I’m just saying he’s so limp.
Marty: Jackie!
Jackie: He teases his hair for hours and it just lies there.

Grandfather: If you don’t have something of import to show me within the week, I’m going to have to send someone to clean up your mess, and I’m going to be very bitchy about it.

Jackie:Husband, what are you doing in here on your computer looking all nervous and sweaty?

Debbie: Hey Marty, it seems that aliens and humans have more in common than we thought.

Marty: It was one time.

Jackie: Do you happen to know what area of the bowling alley I can find a good dentist in?

Dick: We all know how this ends; I tag you, you tag me, I fall over and shatter my femur. Can we just cut to the chase?

Jackie: We’ve been married for 1402 years.
Barbara Hartley: Sometimes it feels that way, doesn’t it?

Bill Nye: Is this a real TV show?
Dick: My friend, I’ve been asking myself that question for two seasons.

Larry: Stop your pacing and mumbling, it’s interfering with my mumbling and pacing.

Larry: I just failed my ten-year mission to Earth and my father is going to take my family away.

Grandfather: Did you get the birthday cheque I sent you?
Reggie: I got all five dollars, yes.

Grandfather: You’ve failed me for the last time.

Debbie: What wine pairs best with husband’s betrayal? Oh, screw it. I’m gonna have the cake.

Joel Stein: I’m pretty sure fossils were put there by the devil to confuse you.
Bill Nye: At what magazine do you work?

Debbie: That is so cheesy.
Marty: I know, I think it’s the beer. You should probably drive home.

Lawrence O’Donnell: You should call yourself Bill Nye the selfish guy.

Marty: Deborah, why are all three of your hall passes in the kitchen, and why are you on the floor?

Bill Nye: I think she likes us.
Joel Stein: Ya think, genius?

Thanks to Kenn for final staging of the audio video embeds and images in this news article and thanks to you for stopping by WormholeRiders News Agency!!
We look forward to seeing more of you here at our review site dedicated to our wonderful aliens friends known as The Neighbors!

Comment (1) on “The Neighbors: Close Encounters of the Bird Kind, Grandpa is Back!”