Many shows, these days, have decided to do holiday specials. The Neighbors are no different in that respect. What is different, and lots of fun, is the knowledge that not one single Christmas tradition will be unsavaged during this special episode!

Larry Bird (Simon Templeman) gets the distinct honour of playing the Grinch, Ebenezer Scrooge, and Charlie Brown, all at the same time. He is very versatile that way. 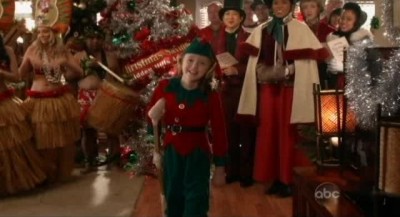 I must begin by stating that I love really this show! The writers are doing a wonderful job coming up with new ways for the alien community to mess up American cultural traditions and to edify miscommunication of social morays in humorous ways.

There is only one more wonderful episode this year before The Neighbors returns in 2013 to complete a full season after being picked up for the second half of season one.

The final episode of 2012 “Juan of the Dead” is when we all get to learn about the “Zombie Gardener” in the Weaver’s yard! Thanks to the great team at the ABC Network for making this promotional trailer available for viewers in the United States!

However, there is no way that this episode is set in New Jersey. Forget the concept of climate change and global warming. Unless the aliens have placed a huge energy bubble over the gated community, the neighborhood is going to have leaves turning colour and snow swirling around people’s feet at Christmas.

New Jersey is just too far north of Los Angeles or Florida for any other outcome. Yet, whenever the Weavers leave their home for any reason, the shrubbery is still green, and there is not a hint of the white stuff anywhere. 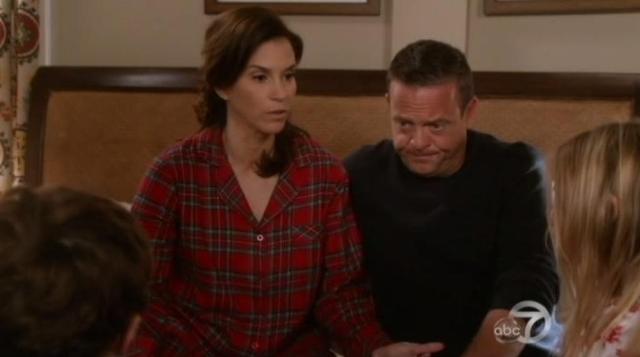 Anyway, this episode begins with the Weavers anticipating a very Unmerry Chistmas, just like the Whos in Whoville, only to discover an Alien Christmas in their living room. Cue opening credits. 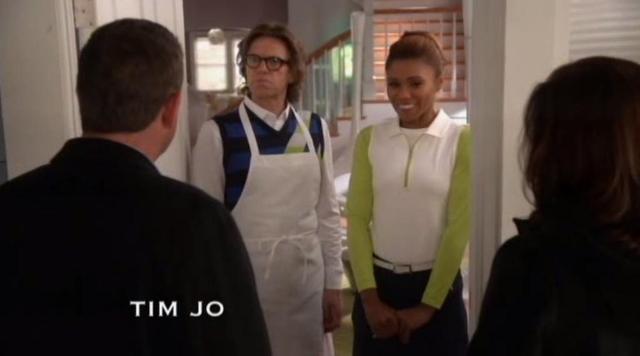 However, four weeks earlier, Debbie (Jami Gertz) and Marty Weaver (Lenny Venito) are all smiles since they have finished their Christmas shopping and plan to cleverly hide the loot with the alien family next door. Oddly, when Larry Bird opens the door, he is wearing an apron. Instead of using it to protect his clothing while cooking, as most people do, he is wearing it because he likes what it does to his silhouette. 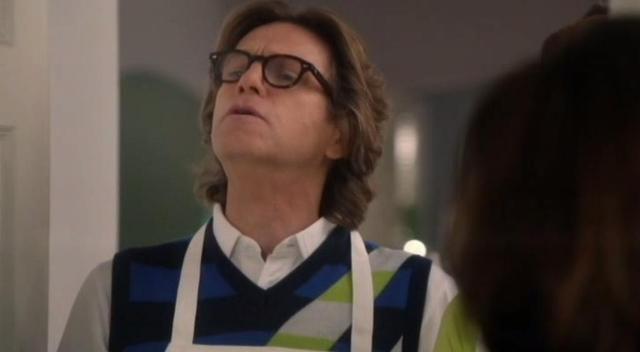 Once Debbie asks Larry and Jackie Joyner-Kersee (Toks Olagundoye) to hide the gifts at their house, Larry begins his diatribe about the commercialism of Christmas. Debbie does her best to defend the Weaver experience, including how the youngest Weaver, Abby (Isabella Cramp), enjoys it so much. 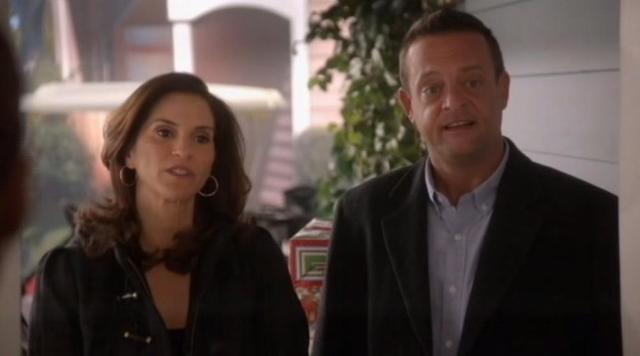 Larry has to continue, even after Debbie gets defensive about her daughter, “what’s so special about that little girl? Nothing that I can see, yet you two have concocted another excuse to lavish both her and the other more worthwhile Weaver children with disposable commercial crap”. Oh look, Ebenezer Scrooge just entered the room. 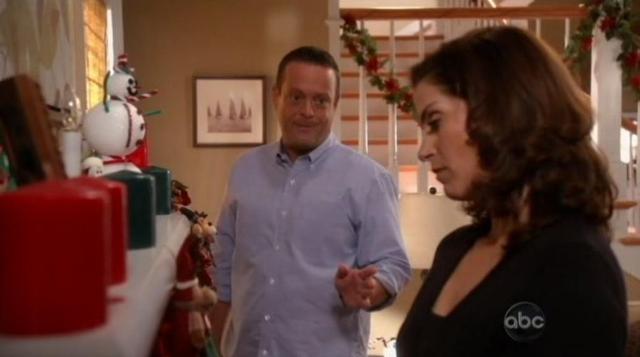 Even with all the gifts for the kids, Debbie is still not feeling the mood. She wonders if Larry is right about them. Just as Marty assures her they are all fine, Amber (Clara Mamet) shows up, demanding that a snowboard that she has been promised for Christmas meets her parameters. Then Max (Max Charles) joins in with a long list of specific present requirements as well. Abby is the only one who is unconcerned. Santa will provide. 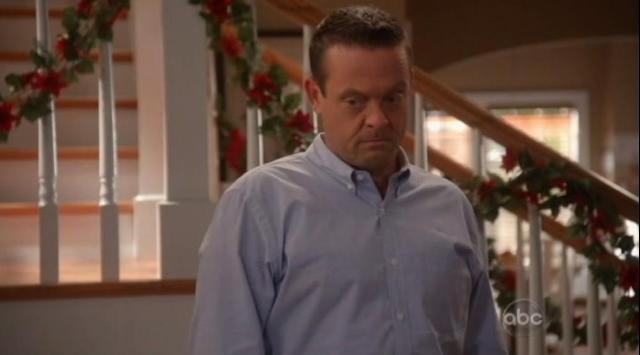 It is all about family, as the Weavers have just assured Larry and Jackie, Debbie and Marty have a change of heart, and plans, “let’s go somewhere tropical”. Debbie has a brilliant idea, “we return the presents and use the money for the trip”. Marty is skeptical for about three seconds, then, oh joy, Christmas in Hawaii. Marty is going to be brown for the Super Bowl! 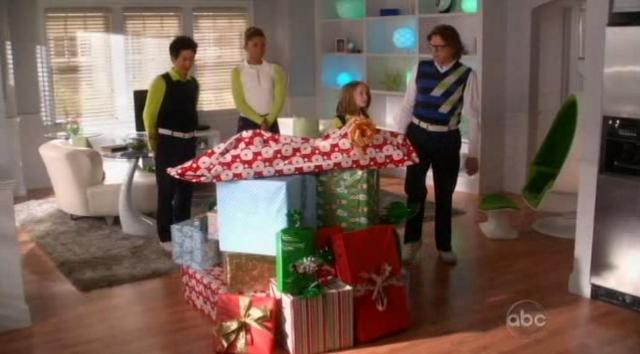 At the Bird-Kersee house, Larry is continuing to complain about gift giving and Abby. Is she really that cute? And why do her teeth keep falling out of her face? What is next, her nose? Picking up one of the gifts, Larry is curious about the contents. Reggie Jackson(Tim Jo) has it all figured out, “It looks like some sort of board, perhaps for a winter sport”. That is one smart teenager. Naturally, Larry, still in his mood, disagrees. 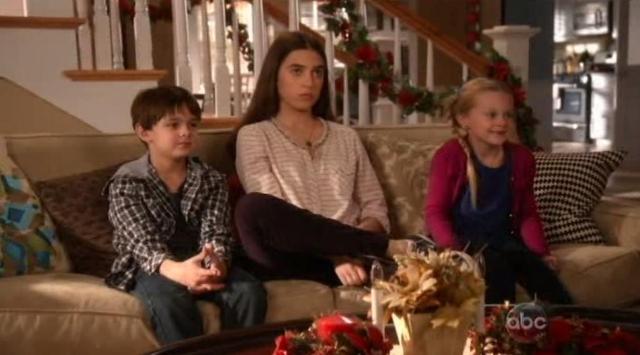 Now that the adult Weavers have come to their decision, without consulting the kids, everyone is gathered into the living room to learn they are not getting gifts. They are going on a family vacation. Well, I am in. I think it is an awesome idea. Predictably, the kids do not. 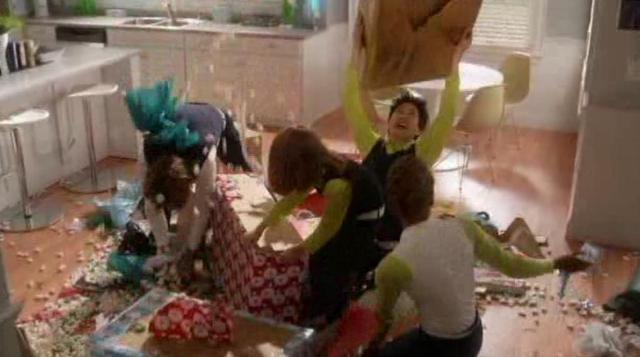 Larry is dying to know what is in the gift that is at the top of the pile. He, “accidentally” rips off some of the wrapping. Within seconds, the entire gift is unwrapped, and Larry is beside himself. Who knew that opening presents was so much fun. This is where it snowballs, so to speak. As Larry is fond of saying, “oh dear…” 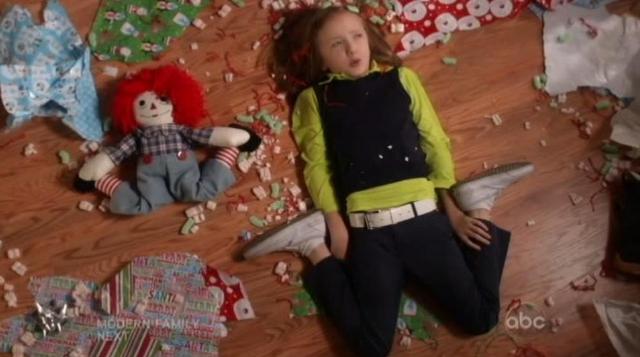 Apparently, the Weavers also bought some Christmas DVDs, because the Bird-Kersees spent the day watching them. Larry liked The Christmas Carole, while Dick Butkus (Ian Patrick) found Tiny Tim, “little, weird and totally unrelatable”, as he lies on the floor looking like he could act the part of the little boy… 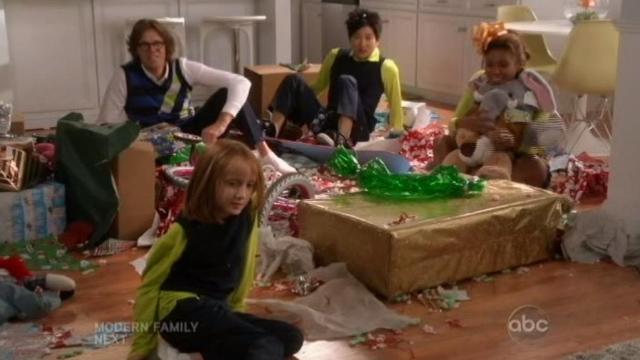 Larry admits to being wrong about Christmas. Now, he says, “It’s a lovely holiday, things, trees, snow…things”. As usual, Larry’s moods are always reflected by Dick Butkus. Now he is happy too. Larry does a very good imitation of Kermit The Frog, when he states that he wants to watch The Muppets again. 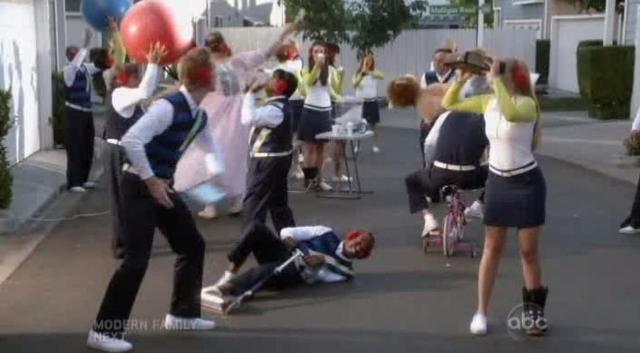 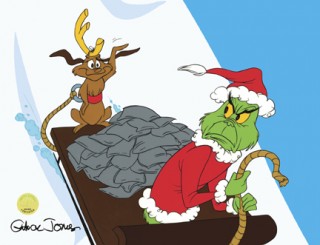 “You’re a mean one, Larry Bird,

You really are a heel,
You’re as cuddly as a cactus
You’re as charming as an eel
Larry Bird

You’re a bad banana with a greasy black peel

The Weavers are shocked and dismayed that Larry has shared all of their Christmas gifts with the other aliens. He is in a great mood, “I won’t let you ruin Christmas for me, I just won’t.” The Weavers, not so much. 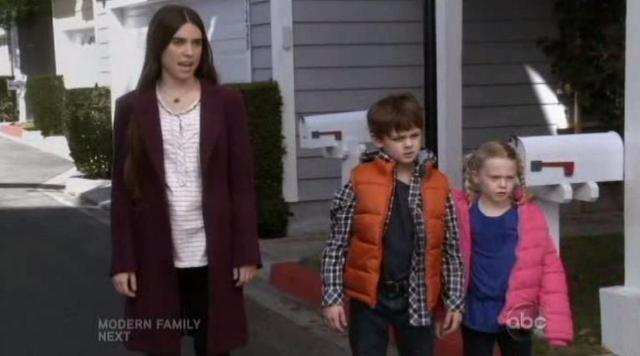 Thank goodness the kids do not know about this. Oh, wait…too late. Debbie berates Jackie, “this is a major screw up”. Jackie has a great answer, “Oh dear, it’s just that you have so many holidays for us to screw up. Can’t we just get to the part where everything turns out all right and we learn from one another?” The kids have it all figured out. It is the worst Christmas ever, says Amber. “A whole year of being good right down the crapper”, finishes Max. Abby, of course, representing Cindy Lou Who, states, “you’ve been naughty, Mr. Bird. And Santa knows when you’ve been naughty, and he knows when you’ve been nice”. 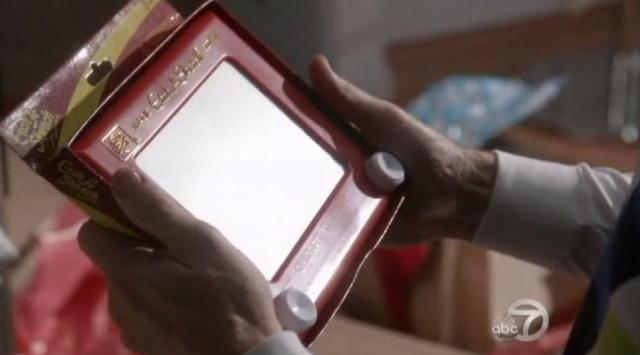 Larry, still not swayed that they should not have destroyed Christmas for the Weavers discovers an unopened gift. He calls the Etch-A-Sketch he discovers, an I-pad. Jackie arrives to worry that they did, in fact, make a mistake and she gives him an ultimatum, “either you make it right or I will”. 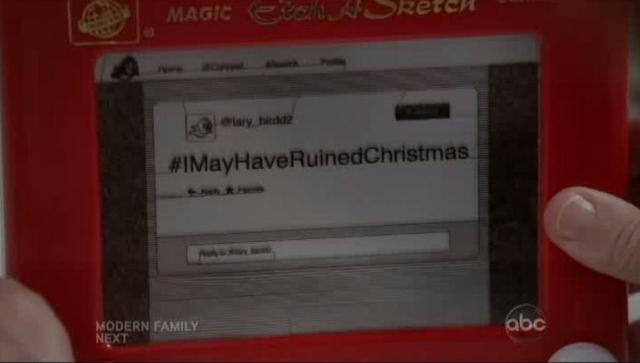 As Kermit The Frog sings a Christmas song in the background, Larry stews about the possibility that he has ruined Christmas for everyone. In fact, he has created a perfect Twitter message on the toy, which is ironic, because Simon Templeman, who plays Larry, is one of the only two main Neighbors characters who does not have a Twitter account. For anyone wishing to check out the account, look for @lary_birdd2 on Twitter. It does exist. 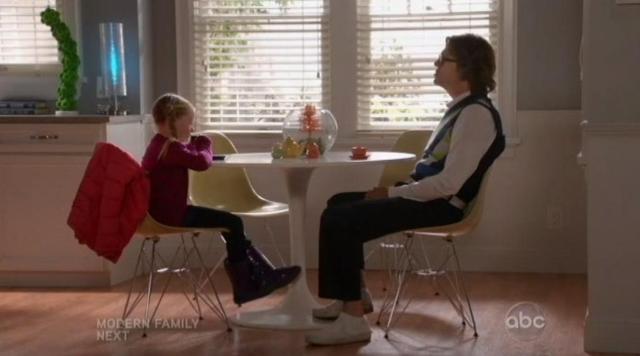 Fortunately, Abby Weaver is shadowing Larry Bird. They end up having tea together as she explains to him just how he messed up. “I’ve been watching, and I can tell you’re sad. I just wanted to tell you not to be sad. Santa is going to make everything all better”. She got a letter from Santa when she was four. He told her to never forget what Christmas is all about – family. Larry is actually listening, finally. 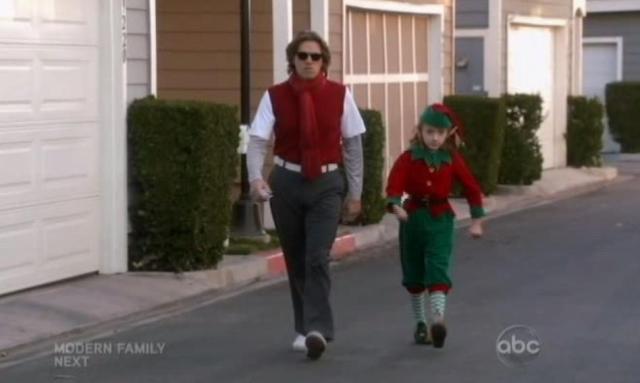 Larry continues to play the part of the Grinch. Since he does not have a dog to pull his sleigh full of toys, he enlists Tiny Tim, I mean, Dick Butkus to be his elf. Although it is not displayed later on, he buys the Weaver family a new car, a live piglet, and, for some reason, two strippers, among other things. 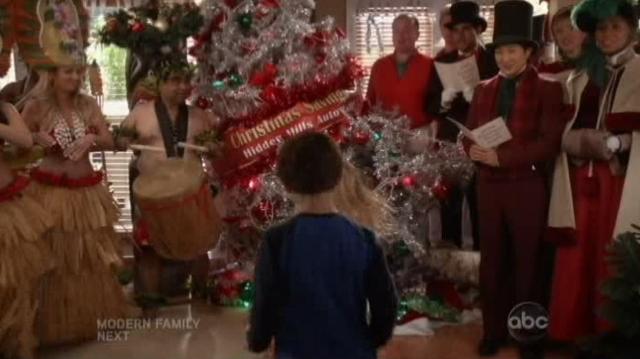 We are brought back to the moment of truth – Christmas morning. The Weavers expect nothing for the special day, hence the title of this episode, Merry Crap-Mas. Debbie and Marty do their best to put on a brave face. They head downstairs to the most bizarre Christmas ever. 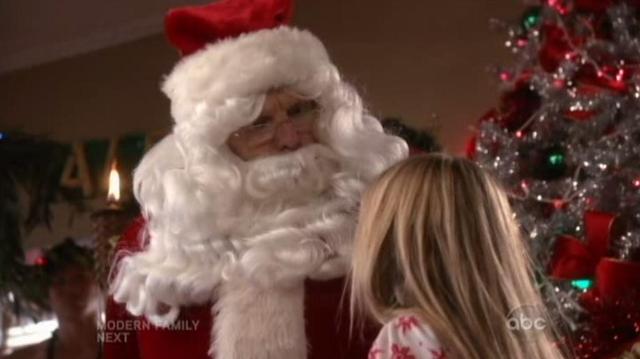 As Larry plays Santa, giving out gifts, Abby approaches him, delighted. She tells him she knew he was an alien, but did not know he was also Santa. Larry replies, “don’t tell anyone. It’s our little secret”. 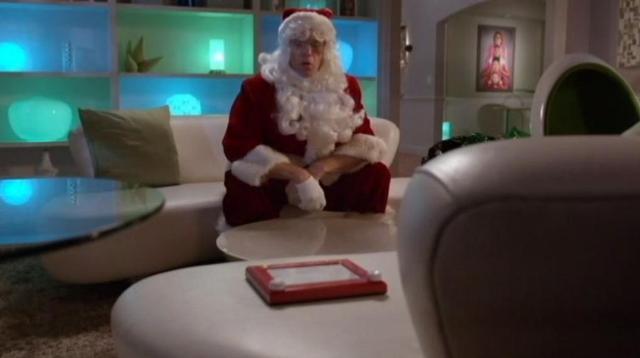 Just when Larry seems to be getting the hang of human culture and acting normally, he demonstrates that he is still as alien as ever as he talks to the Etch A Sketch, and asks it if the Santa Suit makes his @ss look big. Maybe there is no hope for Larry after all. That may be why we love him.

RSS feed for this post (comments)
Previous Post
« The Neighbors: Thanksgiving Is For The Bird-Kersees and Stacy Keach Human In-Law!
Next Post
The Neighbors: Juan of the Dead and Undead and New Brunswick! »