Debbie Weaver (Jami Gertz) has decided that she is going to sew her own purses so she can make a bit of a fair amount of additional money. This sounds like a simple idea.

After all, lots of women own their own business’ and do quite well selling things from home. Since this is Debbie Weaver in the Twilight Zone community of The Neighbors, that is not what will happen, especially with special guest star Bethenny Frankel! 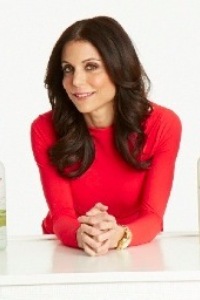 The episode starts with Debbie showing Marty (Lenny Venito) her stock of purses from a previous attempt to make money. Things did not go so well the first time. She was not able to make her small business profitable. In fact, she admits that it was a dismal failure. However, this time, it will be different. 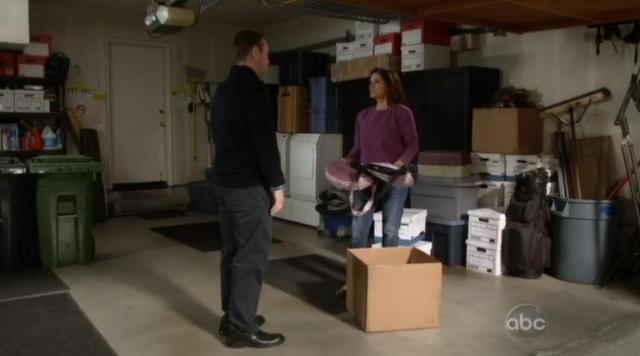 The first concept that is considered is a garage sale. Normally, this also would be a good idea. However, in the Weavers world, nothing is ever normal. What turns out as an effort to get rid of their junk and make a few dollars, quickly morphs into Debbie’s business. 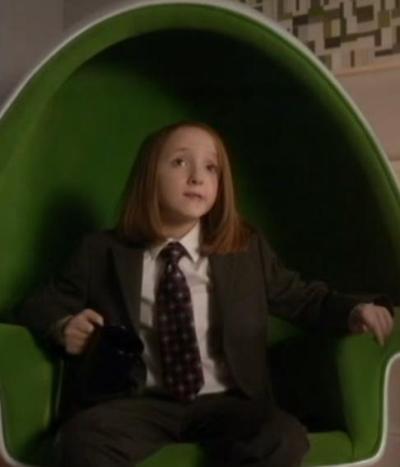 Explaining to the alien neighbors to keep weird to a minimum while strangers are pawing through their garbage, Dick Butkus (Ian Patrick)reveals his latest interest; he wants to be a late night talk show sidekick. Everyone needs a hobby. It is a pity that Dick’s are never quite, what is the word I am looking for…conventional, routine, commonplace…normal?

Jackie (Toks Olagundoye) offers to help Debbie with her business. This is when Larry (Simon Templeman) objects, “Don’t be absurd. You’re a female. You can’t work outside the home.” We all assume this is a continuation of the first episode when Larry seemed to be in charge of everything. However, this is not the case.

It turns out that it is a matter of safety, Larry explains, “Zavbronian females lack a certain skin enzyme that we males are born with. As a result, the women can’t go outside the house or they get burned alive by our atmosphere”. Jackie demonstrates a little explosion.

Larry then destroys a somewhat understandable explanation by then telling Marty and Debbie that male Zavbronians are better at business, etc. He invalidates his entire conversation.  Jackie gets the last word, “Put a cork in it, four eyes”, followed immediately by a message from our sponsor – Texaco, courtesy of Dick. 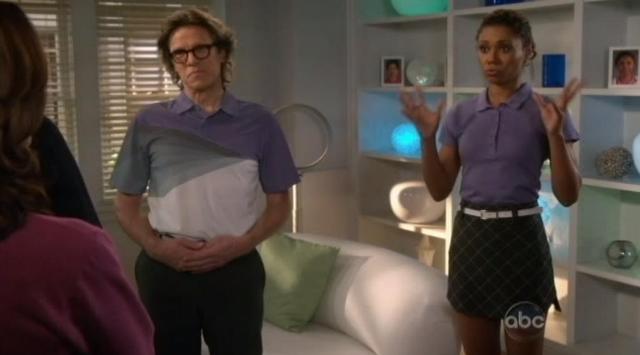 Everyone but Marty seems aware of the garage sale. The whole family is outside helping out, with the exception of Marty, who is clueless, and little Abby (Isabella Cramp). Someone, a completely self absorbed flaky woman with connections, Jill (Bethenny Frankel), takes an interest in Debbie’s product; her purses. 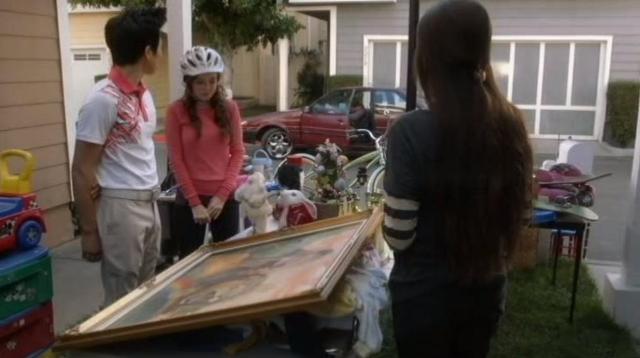 Meanwhile, Amber (Clara Mamet) and Reggie(Tim Jo) are having a good time kidding around until Giselle (Laura Plattner) shows up, followed by Amber’s old boyfriend, Jeremy (Grant Harvey). Amber wants nothing to do with him, but he does not seem to get the hint, “It’s totally over. He just won’t go away. Everyone knows it. It’s like American Idol”, Amber states, worried. This joke sends Reggie into a giggling frenzy. 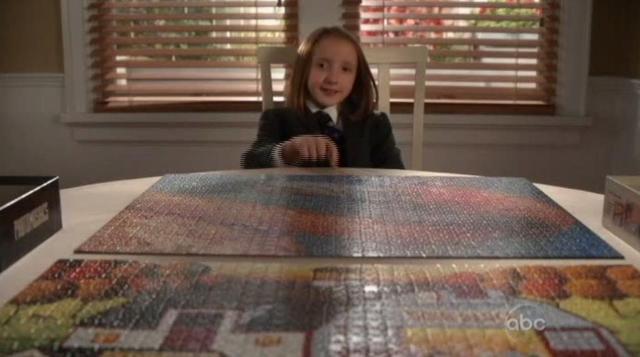 Inside the Weaver home, Marty is torturing Max (Max Charles)with a puzzle. He has been looking for a “thing”, to do with Max, and is hoping this will be it. Max is not so sure. While Max tries to get out of any future puzzle making endeavors, Dick demonstrates that puzzles are actually a breeze. He gets both puzzles done while Marty is explaining the concept of puzzle making to Max.

Okay, has anyone else wondered why Debbie and Marty have not taken Larry and Jackie to a casino to use them to play the Rain Man game? You know, count cards, win at some card game and get rich? One word, Larry – Gambling. Maybe that is just me.

It is truly amazing how quickly the lady in pink begins rubbing everyone the wrong way with her attitude. She forces Debbie to wait for her while she finishes her phone conversation, then she gives Debbie the stink eye for Debbie’s explanation of the history of the purses, but they get a sale, thanks to Jackie. 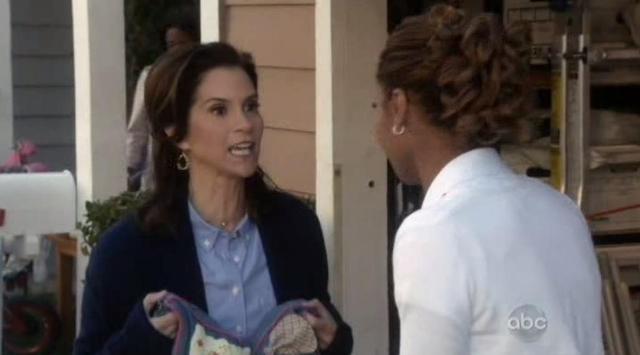 Next step, Debbie and Jackie are out shopping for what they need to make more purses. During her conversation with Jackie, Debbie realizes that Abby and some of her friends will be arriving home shortly for a girl scout jamboree event. Panicked, she phones Marty to expect them. Marty, however, is not home. In fact, the only one who is, happens to be Larry. 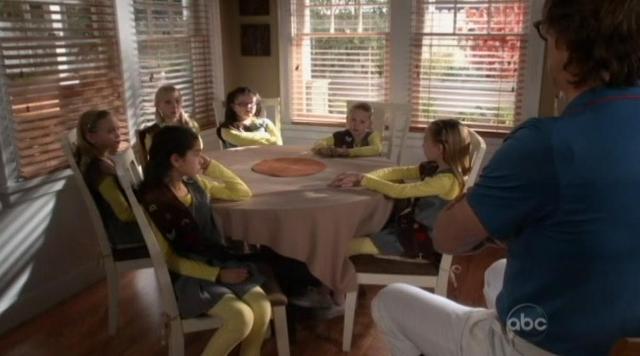 The little girls are bored with Larry. He, on the other hand, has their future all mapped out; wait at home for your husbands, and, “don’t get fat”.

Debbie and Jackie arrive home. Jackie has managed to increase the price of the purses to $35.00 each. Debbie is very happy. She directs that to Larry as she tells him, “This is women working”. Unfortunately, in the next breath, things go south. They need 50 purses by Monday. Panic and self doubt ensue. Larry cannot help but rub it in, With a big smile on his face, he points out, “This is women working”. 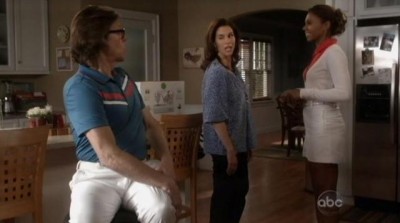 As Debbie and Jackie organize themselves into a cohesive working team, Larry discovers that the six little girls he is now in charge of can do some pretty fancy hair braids. He is so impressed that he gets them to their feet to get moving on their badge earning. 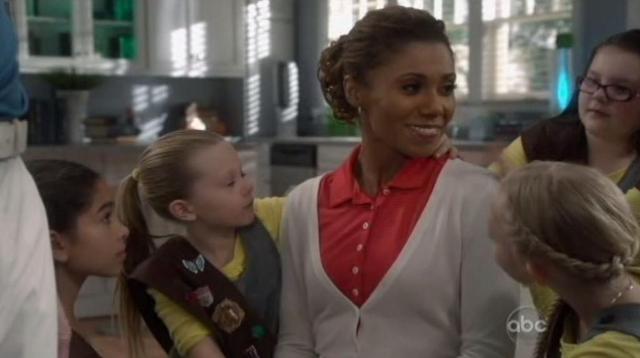 Jackie and Debbie take a break. While they do, Jackie finds Larry enjoying a dance game with the girls. He is having a great time with them. Jackie is glad that someone is enjoying themselves, because she is feeling a bit down about her lack of success. The girls gather around her to try to help her feel better. Larry is impressed, “ah, you help each other…” 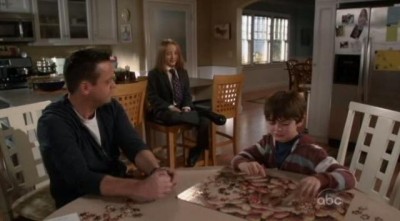 Max and Marty are challenged by another puzzle. As usual, Max is looking for a way out. Marty explains that the two of them need to finish the puzzle together so they can “get the feeling of accomplishment when all the pieces fall into place”.

Debbie also appears to be at home. The doorbell rings. It is the nasty lady in pink once again, who seems to get some sort of feeling of self worth by constantly looking as if she is busy and in charge.

She wants the purses right now. Before Debbie has a chance to answer, Jackie arrives to explain that the problem is solved. It is about women helping women, after all. 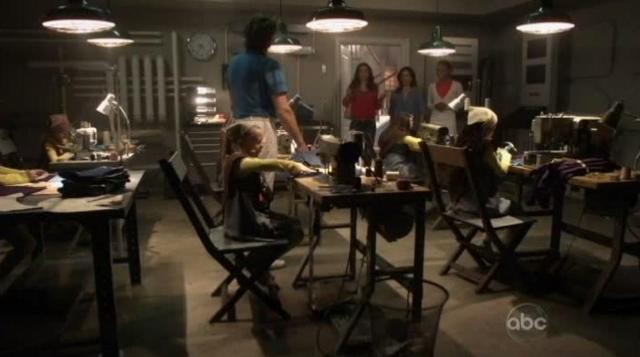 It appears that Larry and Jackie have created a sweatshop. Lady in pink disavows herself from any involvement with the sweatshop. Debbie has to now go into damage control, and the girls behave as if they have not seen the sun in weeks, “air, sweet, sweet air…” 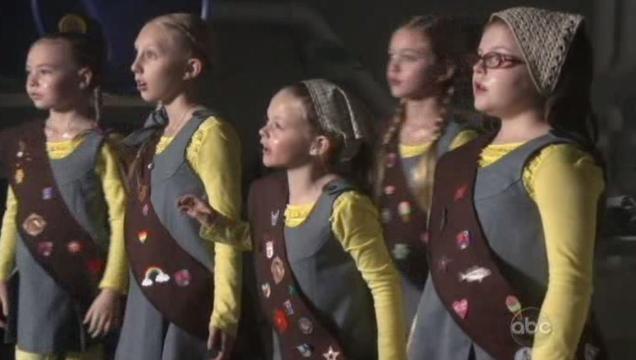 Marty and Max seem to finally be getting the hang of puzzles. The girls walk in and Dick Butkus continues with his late night wise cracks, which are driving Marty and Max crazy. Obviously, late night sidekick is not going to be Dick’s final career move.

Jeremy hollers for Amber from the street. He is back to impress her with her image on the hood of his car. She is not impressed. She also wants to know why she is Latino. Jeremy has an answer, of course, “the guys at the detail place only paint dead Latin pop stars, and you look more like Selena than Richie Valens”. 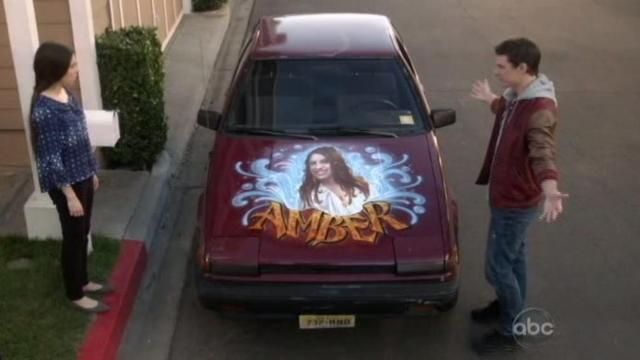 Reggie and Giselle arrive as Amber walks back inside. She continues to tell Jeremy that they are through to a studio audience of six girl scouts. Meanwhile, Debbie admits to Marty that she has messed up, yet again, with the purses. Jackie disagrees. She would like them to try again then labels their company, ‘Bag Hags’. 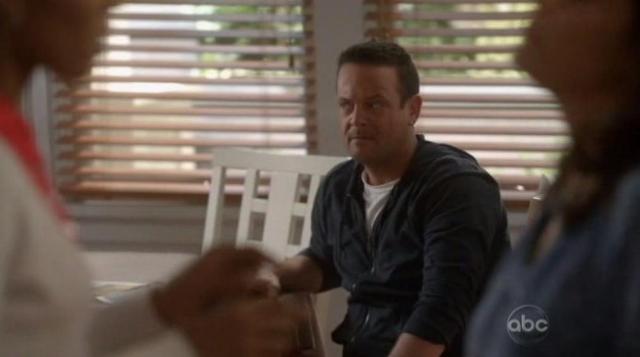 Marty watches everything unfold between all the arguing parties, “the pieces are coming together,” he states. He feels like Dan Marino. I had to look it up, but for you,  I have included information if you want to know who this football player is.

Marty gets everyone’s attention so he can pull what is happening together. Debbie is worried that she does not contribute, but she contributes more than she knows, he tells her. Good on you, Marty, way to be supportive. More men should pay attention to this. He moves on to Jackie – “you want a career because you are good at it”. 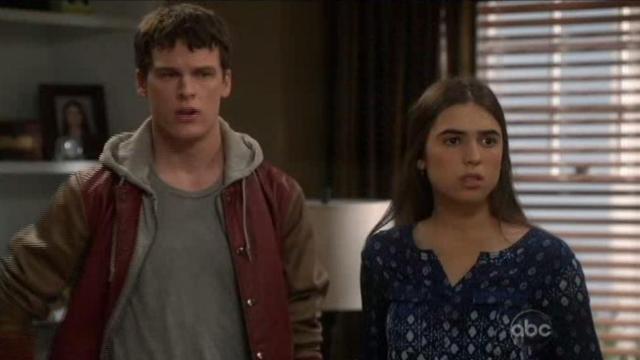 Jackie will need the money from a career, because Larry wants a daughter. Larry’s response is, “I do?”  To Amber he says, “you’re not going to settle for Jeremy because even though he’s seeing someone else, Reggie is really the guy that you like”.

The light dawns for Jeremy, “Thank you, Mr. Weaver. I’m glad that someone could be up-front with me. I just wish it had been before I spent $89.95 getting her painted on my car”. Hey, kid, at least it was not a tattoo! 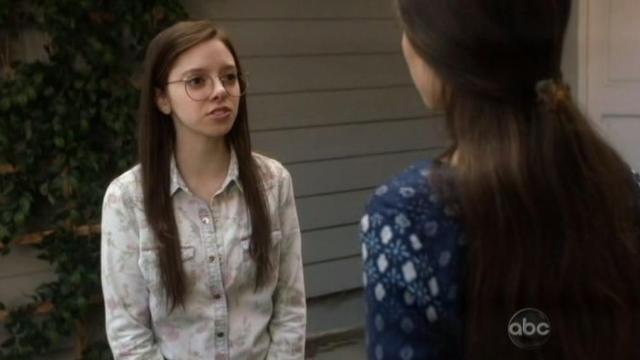 Later, Amber makes an attempt to shove everything under the carpet, but Giselle is not buying it. And, she intends to fight for Reggie. From no girlfriend to two ladies possibly fighting over him, Reggie is about to have many more problems. 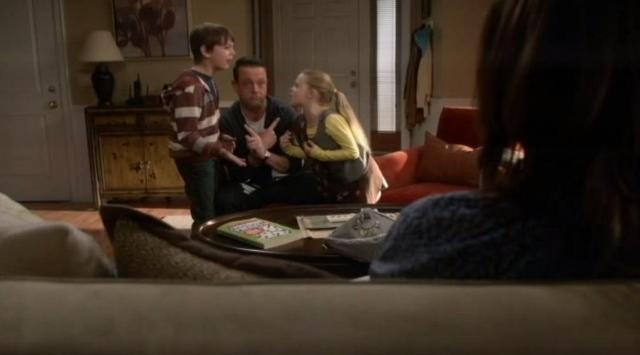 At home, Marty is being a loving supportive husband again, by encouraging the two younger kids to invest in their mom’s new business. He comes up with a business name, “Purse-Anality” following Max’s “Bag Ladies” and Abby’s “Pursy Cats”. The kids argue with the name, each preferring their own as Debbie smiles…cut to black. 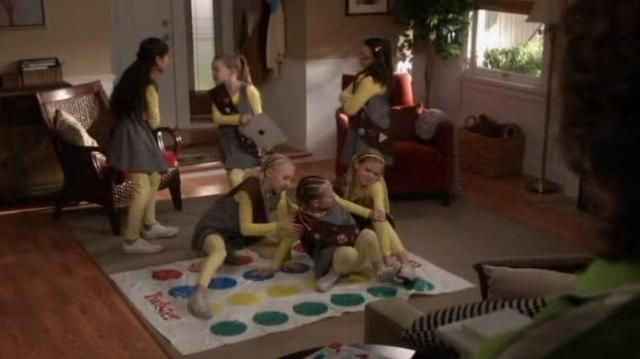 It looks as if Larry is about to learn that little girls can fight just as well as the boys. He offers to take over the scout troop for the day for Debbie because the last effort was so pleasant for him. This time around, things are a little different. This time, the girls are fighting over a game of Twister, and “Uncle Larry” is over his head. Do you still want a daughter, Larry?

Thanks to Kenn for final staging of the audio video embeds of Two Steps From Hell great music from their album “Starfleet” in this news article and thanks to you for stopping by WormholeRiders News Agency!!