Dark Matter is Outstanding! No Hollaback Girls Given All The Time in The Wormhole World!

Major congratulations and kudos to Joseph Mallozzi, the cast, the crews and everyone involved with the hit science fiction drama series on their season three renewal by Syfy that, as Gwen Stefani might say, Dark Matter is the SH*T and is BANANAS (a good thing)! 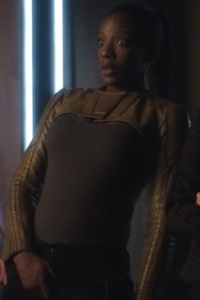 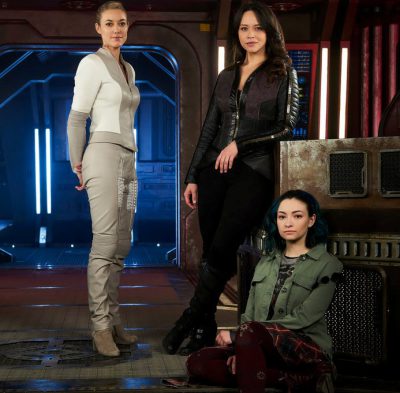 To the contrary, these fine actors are delightful in their roles typifying strong female roles models for millions of human beings the world over. Bravo to the writers and creators as well as the ladies of Dark Matter!

Before continuing our analysis, your support, by watching, tweeting live, with supporting comments, will be critical to help ensure that Dark Matter is “green lit” for even more adventures beyond season three in the future!

Subsequent to the destruction of EOS-7 in the thirteenth episode of season two, where the corrupt Council of Corporations meeting was disrupted by a terrorist who blew the space station to smithereens nearly killing our heroes. The first three exciting episodes of Dark Matter nicely sets the foundation  for season three of this superb series. 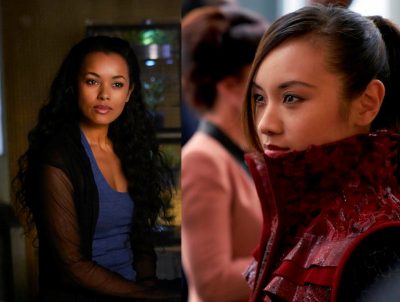 As the third season opens we learn how almost the entire Raza Crew survives with the exception of our beloved Nyx who was viciously murdered by the malevolent, power mad minion of Ryo, Misaki, against the orders of Emperor Ryo (Alex Mallari Jr.) himself!

The first three episodes set aside fears that others within the Raza Crew were killed. This effectively established the third season story arc that the outright corporate civil war being unleashed on the galaxy will produce devastating consequences. 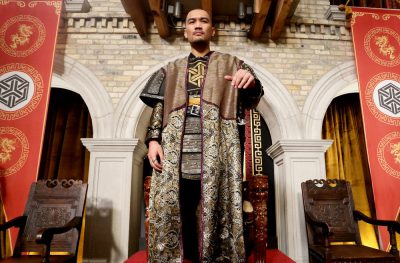 Emperor Ryo on his throne

Subsequent to Ferrous Corporation terrorist treachery by destroying EOS-7, Emperor Ryo plans to leverage the chaos caused by the situation to cement his empire on Zairon to expand his hegemony, in part by utilizing the Blink Drive which he stole at the end of season two, a plan that our heroes put to an end in the season three opening episodes.

As we will find out during the course of season three, Ryo’s plans will back fire placing his so called empire under intense pressure and direct attack. 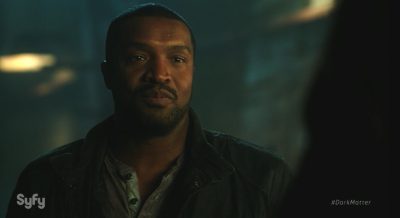 Six says it is settled then

The end of the third episode of season three was a sad one for the #RazaCrew as Six (Roger Cross) elects to stay behind in order to help the former Tralgot corporation colony denizens achieve success after their fight with Tralgot when they won independence.

Subsequent to a group hug, our most emotional Raza Crew member, Five cries bringing tears to the eyes of many viewers. 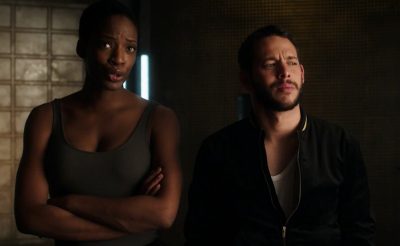 In a bit of good news after The General (Andrew Jackson) is shot in the skull by Six, the Raza Crew gains two new members, Adrian Maro (Mishka Thébaud), a former associate of Tabor Chalcheck (David Hewlett), and his “bodyguard” Solara Shockley (Ayisha Issa) who are reluctantly approved to join the Raza Crew.

These two new regular series characters add comic relief to the Dark Matter saga that comes to fun fruition in the fourth episode when the antics of Adrian and Solara are featured in several scenes including some awesome ass kicking conducted in the workout room aboard The Raza.

In future episodes, namely “Give It Up Princesss” we will learn more about Solara’s interesting back story. Now on to our analysis and review of the fourth Dark Matter episode!

All The Time In The World: 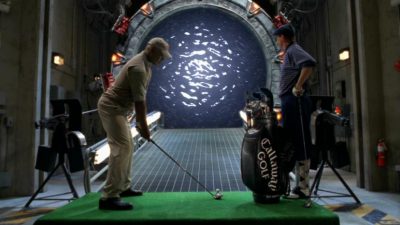 The fourth episode marvelously mixes elements of the hit movie “Groundhog Day” in a fun manner that reminds this editor of one of the all time favorite Stargate SG-1 time loop episodes, “Window of Opportunity”.

An episode that Stargate fans recall with fondness, “Window of Opportunity” is done one better in Dark Matter with new high jinks between all the Raza Crew members! 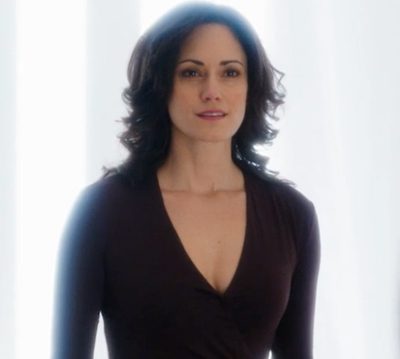 Many hilarious antics of a day repeating itself over and over again are blended with more serious aspects of Dark Matter, specifically the return of Sarah (Natalie Brown) whom The Android discovers after Five had resurrected Sarah’s consciousness inside the Raza computer system in the previous episode “Welcome to the Revolution”.

The poignant discovery includes an interface to the Raza computer which will allow Three (Anthony Lemke) to visit with his murdered lover. As we discovered in “Welcome to the Revolution”, Three is decidedly reticent to visit Sarah thinking it impossible she is alive. Perhaps more importantly, at episodes end, this reviewer suspects that Sarah is not actually dead, but may have been captured by Ryo!

In “All The Time In The World”, Three overcomes his inhibitions to visit Sarah in an attempt to change the repeating time loop so that the Raza Crew can escape a vile plot by Ryo to recapture the ubiquitous Blink Drive that the crew recovered in the second episode of the third season “It Doesn’t Have To Be Like This”. 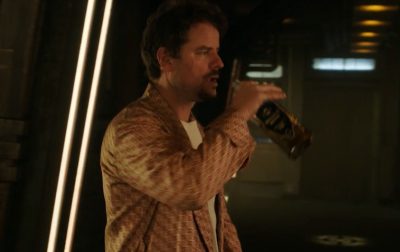 This most enjoyable episode opens with Three emerging from his quarters with a bottle of booze in his hands. Moving down the corridor, Three finds Adrian, Five, Two and The Android where he somehow knows what is about to happen and what will be said by each of his Raza Crew mates!

Continuing to swill more of the booze, Three enters the workout room where Solara and Adrian are practicing martial arts. Three tries to convince them he is in a time loop by quoting what they are about to do and say. They both are dumbfounded by Three’s seemingly erratic behavior, likely attributing his behavior to having too much to drink! 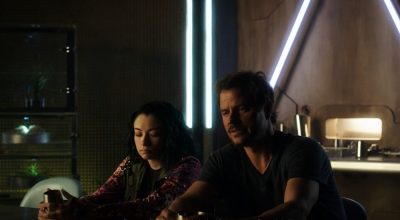 Three has coffee with Five

Frustrated to no end, Three is at wits end trying to convince Two, or anyone else for that matter that he is in a time loop. Seeking out Five who Three tries repeating her own words back to her.

Each time he does so, in very funny sequences, Five says “that is supposed to make me feel better?” (about Six leaving the Raza Crew). 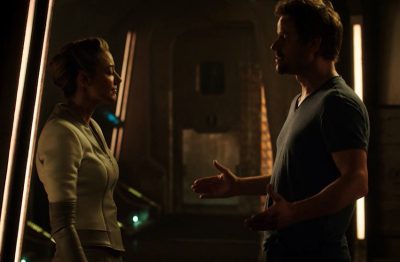 As the exciting episode continues, Three fails to convince anyone that he is in a time loop until he returns from a loop and asks The Android to teach him specific French language, technically detailed, about the problems with the FTL drive affecting The Raza.

This process works as he meets with Two and The Android who suggest that Three try doing things differently to break out of the time loop that has trapped them all. 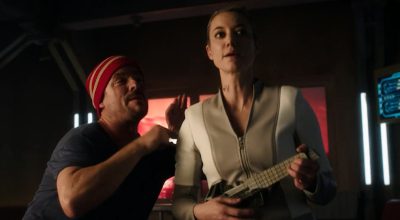 Android and Three sing in French

Three, after using his newly acquired French language skills, is ultimately successful in convincing the entire crew who doubted him earlier.

During this segment, an outrageously funny bit is played out as The Android and Three sing together to the utter astonishment of the Raza Crew! 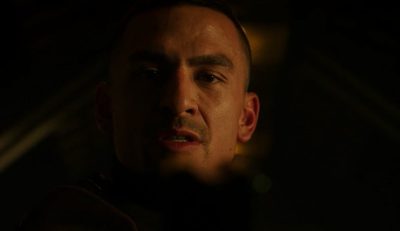 The story arc then shifts to an assassin named Ash who has been sent by Emperor Ryo to retrieve the Blink Drive. Ash is somehow capable of phase shifting in space to arrive on the Raza when the ship has docked at a space station for much needed rest and relaxation.

Ash begins by attacking Five who is rescued by Solara. When confronted by more members of the Raza Crew, Ash phase shifts to escape until he is stunned by Two while he was attacking Three. 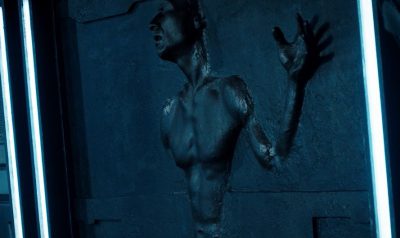 Ash the assassin is stunned phases like Hans Solo in Carbonite

Incorrectly thinking the phase shifting technology is hidden in his clothing, Ash is locked in a force field cell. It is here that we learn Ash himself has been modified and phase shifts once again to escape.

Tracking Ash down in the corridors of the Raza, Ash attempts another phase shifting escape only to be stunned and trapped in the walls of the Raza in a scene reminiscent of Star Wars when Han Solo is frozen in Carbonite by the evil Jabba the Hut. 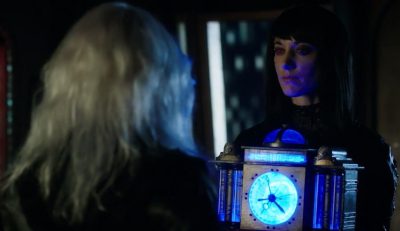 The Android in the distant future with time loop device

With Ash the assassin neutralized, our heroes focus on stopping the time loop device before they are transported back in time only to have to face Ash again. The Android then locates the root cause of the time loops, a clock like device that glows and affects anyone who come in to close contact with it, including Ash, Adrian and The Android, now all trapped in the time loop nightmare.

Android, attempting to “calibrate” the time loops messes up making things worse. The scene shifts to the distant future when The Android has been disassembled by an evil scientist who apparently plans to enslave her for his own evil plans. Viewers are horrified to see our lovely Android trapped in an examination room with several parts of her body on a nearby table! 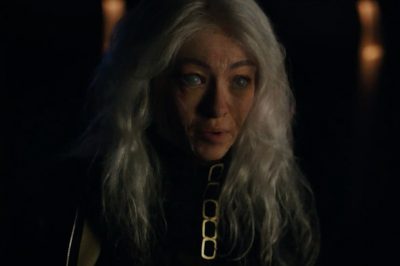 Next we meet Five in the distant future who is with The Android.

Android is carrying the time loop device whereby Five explains that she must not attempt to fix the situation.

Five has related that things did not go well after Android messed with the device.

Instead she must destroy the device back in the past before the real disasters becomes manifest that Five has shared with her. 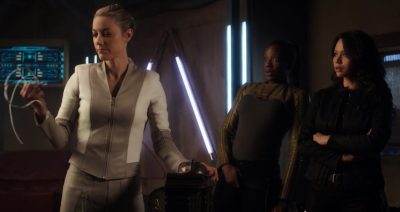 Back in the past, Android appears to be attempting to calibrate the device again when she remembers what she learned in the distant future. Thank goodness!

With the Raza Crew free of the terrible time loops, Three returns to visit the love of his life, Sarah. The two fall back in love and kiss.

Viewers begin to think that all is well. Wrong! 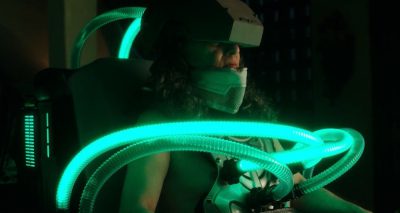 Ryo shares with his minion that his assassin, Ash, has somehow failed.

Not accepting defeat despite a “double blow” of losing Ash, his best operative, Ryo is observed in a room with a brunette strapped to a technology of some sort. Her head is encapsulated in a devilish looking device.

As the most enjoyable episode ends, we witness Ryo telling the woman, that with her help, he will locate the Raza and extract his revenge on them all! 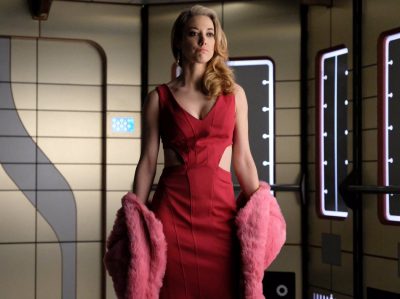 The Android as the Lady in Red

Kudos to Joe Mallozzi and Paul Mullie, the cast and crews for an outstanding first four episodes. Make sure to watch live next week for the fifth episode of season three when we will meet “The Lady in Red”.

The question for Dark Matter admirers to consider, based upon the released promotional images, is it The Android who confronts Misaki in and episode aptly named “Give It Up Princess”?

Or is there another “princess” who has been involved with a Raza Crew member who will have to “Give It Up” to save the galaxy from the impending war? Perhaps a favorite actress from Defiance?

Make sure to tune in for Dark Matter Friday June 30, 2017 on Syfy and Space Channel to find out!