The time for the next wonderful auction by Profiles in History is here! Arriving just in time for Christmas, Kwaanza, Hanukkah or whatever you celebrate in the festive 2010 holiday season, several outstanding somethings are about to happen! What could they be you may ask? 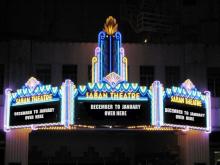 First, as you may be aware, our team of reporters loves Hollywood Treasure and have had the privilege of being at the Lost Auction and Hollywood Charity auction events this year. We will be returning to Hollywood very soon to bring you live coverage of the latest event discussed below. The two-day event will take place at the Saban Theatre, 8440 Wilshire Boulevard in Beverly Hills, California (click here for map and directions).

Profiles in History, the world’s largest auctioneer of Hollywood memorabilia and the “star” of the hit Syfy Network

television show, “Hollywood Treasure” will present over 1300 lots of iconic items from film, television, music and more at their at their upcoming Winter Hollywood Auction, December 17-18, 2010. You’re sure to find something for the fan or collector who has everything—or thought that they did!

Second, WormholeRiders News Agency is certain you will appreciate this happening by attending this wonderful event either by registering to bid LIVE or by visiting the Profiles in History web site to register to bid on-line registration, or by telephone or absentee. Please review the press release below for more details. 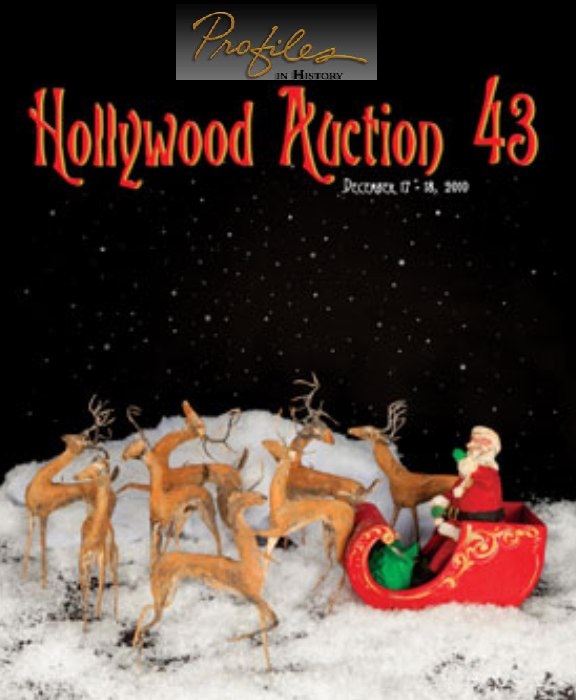 Oh and critically please remember that the mid season finale of “Hollywood Treasure” is this Wednesday, December 8, 2010 10 PM East or West on SyFy. This is a program you do NOT want to miss! Another fun item is that your friends at SyFy are running a marathon of Hollywood Treasure tomorrow as well beginning at 8 AM EST tomorrow so you can catch up on all the 2010 auction action before the mid season finale tomorrow evening! Let me assure you that your time and consideration in watching will be richly rewarded because Hollywood Treasure is a VERY fun show!

Before sharing the details of the Profiles in History Hollywood Auction 43, remember that on Wednesday December 09, 2010 we will have a special behind the scenes report about Joe Maddelena and his fantastic Profiles in History  Team from the recent Hollywood Charity auction featured on the mid season finale tomorrow evening! 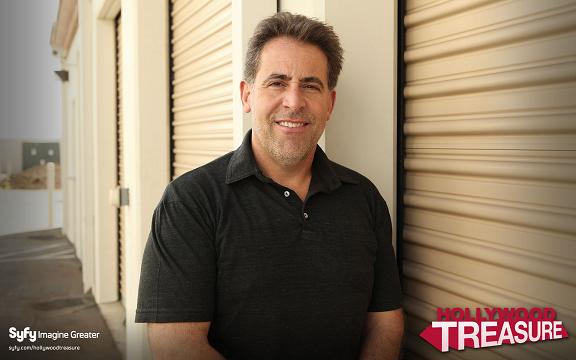 Some of the highlights include an original movie poster from the Universal horror classic The Invisible Man, valued at over $200,000; 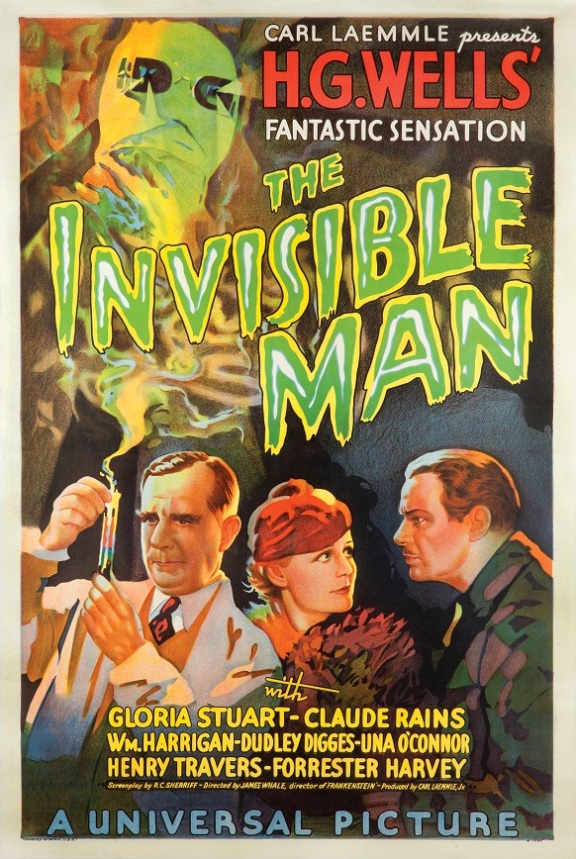 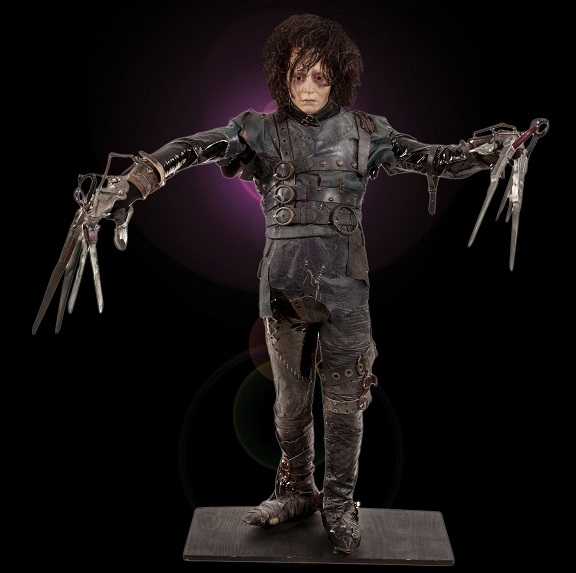 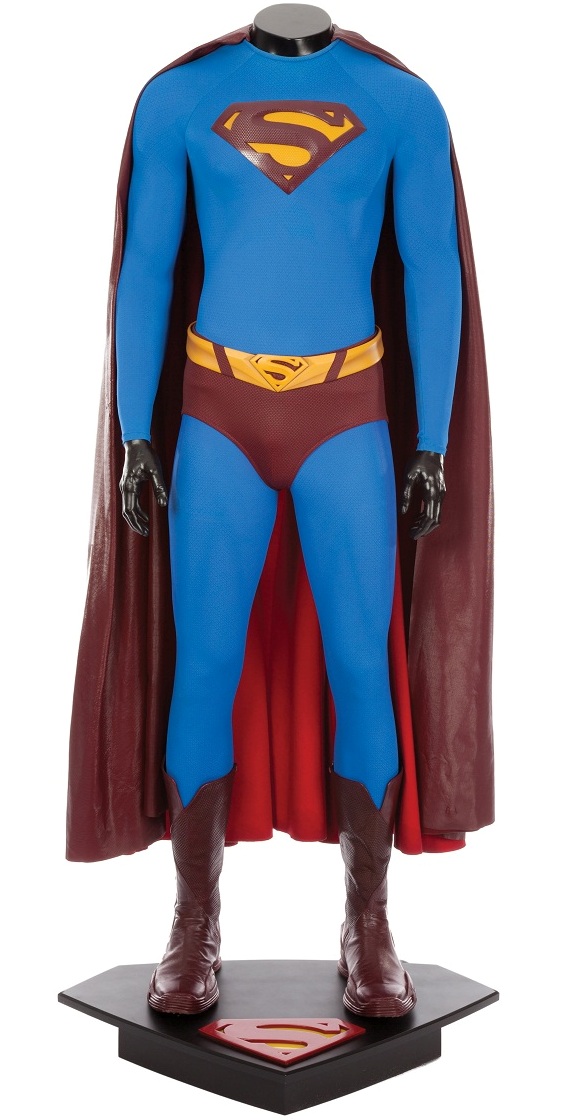 The Wizard of Oz vintage clothbound book signed to Jack Haley’s son by virtually the entire cast and crew, including Judy Garland and Toto!; 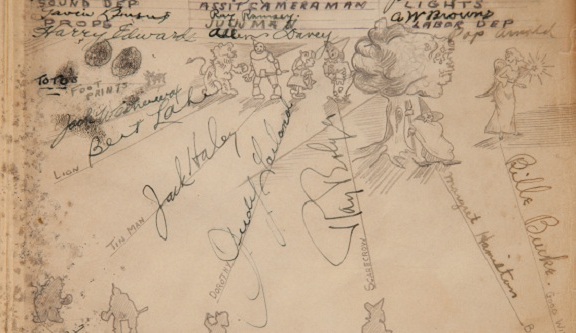 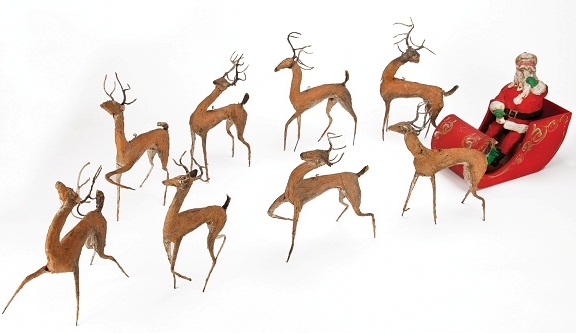 As always, thank you for reading and visiting WormholeRiders News Agency. Please feel free to leave a spam free comment or question here or click one of the social media icons below to share this news article. if you prefer (as so many of our visitors do) you may also visit and follow WHR on Twitter or Facebook with your comments or questions. 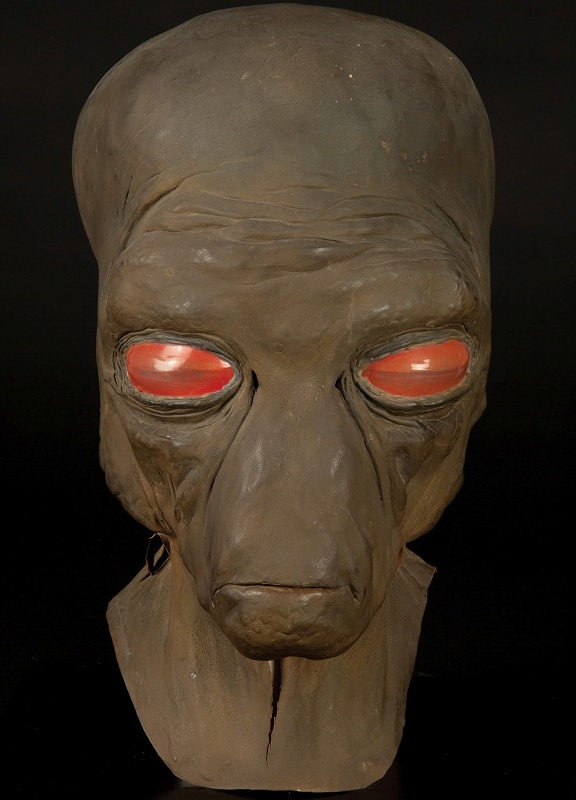 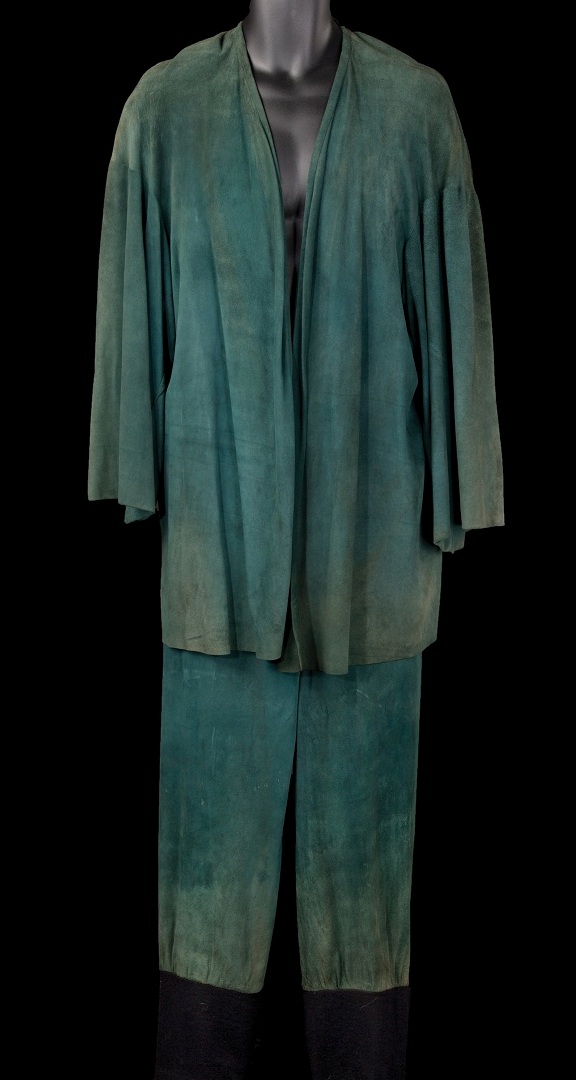 The Wizard of Oz—signed to Jack Haley’s son by virtually the entire cast and crew including Judy Garland and Toto!; a large panel of Johnny Carson’s monologue curtains; “Ricky Ricardo’s” kimono worn by Desi Arnaz on The Lucy-Desi Comedy Hour; Harrison Ford heavily-annotated complete shooting script for Raiders of the Lost Ark and James Cagney’s original tap shoes for his sole Oscar-winning performance in Yankee Doodle Dandy, The Terminator leather jacket (shown below, scroll down) and leather glove are among other highlights of 1300+ lot auction. 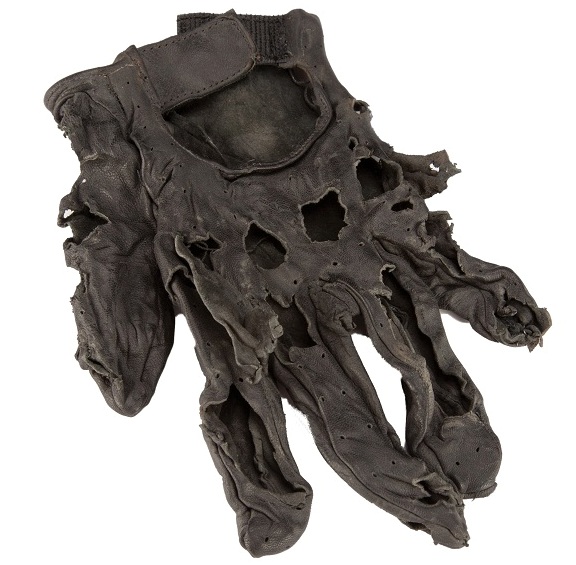 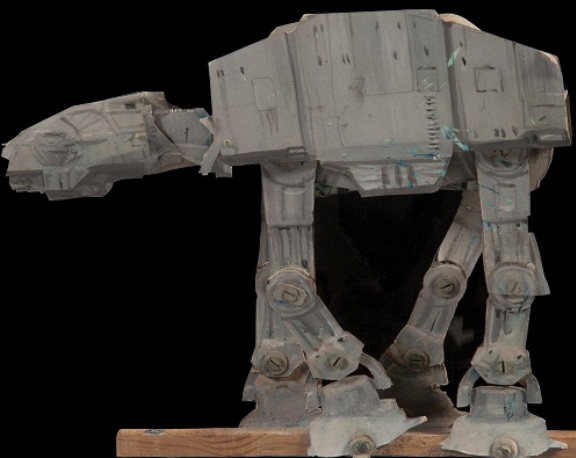 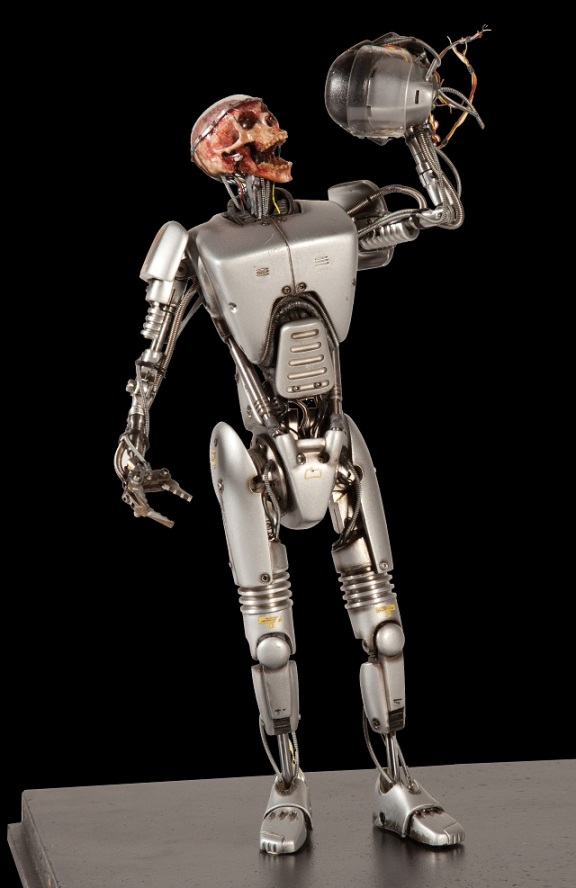 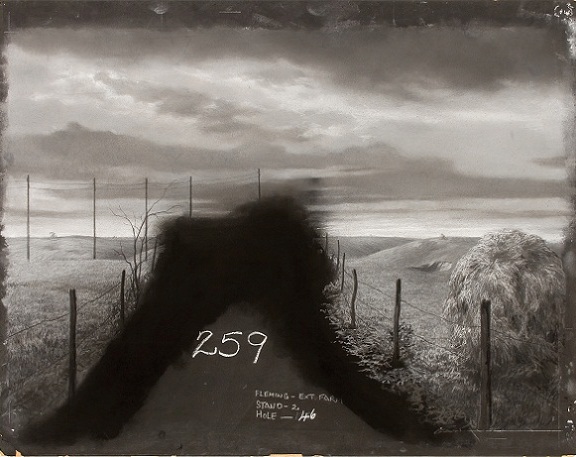 A complete hero Brandon Routh Superman costume from Superman Returns ($50,000-$70,000); Bela Lugosi “Ygor” green suede costume from Son of Frankenstein ($80,000-$100,000), and Santa himself—complete with sleigh and reindeer— the original prop Santa Claus, sleigh and reindeer from the opening scene of Miracle on 34th Street ($20,000-$30,000) will be among the 1300+ items being offered by Profiles in History, the world’s largest auctioneer of Hollywood memorabilia and the “star” of the hit SyFy Network television show, “Hollywood Treasure,” at their upcoming Winter Hollywood Auction, December 17-18, 2010. The two-day event will take place at the Saban Theatre, 8440 Wilshire Boulevard in Beverly Hills.

Worldwide bidding begins at 12:00pm (noon) PT both days. Bids can be placed in person, via mail, phone, fax or live on the internet by visiting Profiles in History or iCollector. If you’re looking for a “one-of-a-kind” holiday gift for the film or television fan that has everything, you won’t find anything better than this.

In addition to aforementioned iconic props, costumes and set pieces, Profiles in History Auction #43 will include an incredible selection of items that sprung from the mind of visionary filmmaker, Tim Burton, including stop-motion puppets and artifacts from The Nightmare Before Christmas, Corpse Bride, James and the Giant Peach, Sleepy Hollow and Mars Attacks!, an unprecedented selection of pieces from the collections of Academy Award-winning visual effects geniuses, Phil Tippett, Stan Winston and Richard Edlund, (featuring pieces from such landmark films as Star Wars [Trash Compactor Creature from ‘A New Hope’ illustrated below], Raiders of the Lost Ark, The Terminator, Jurassic Park and Edward Scissorhands) and one of the most important collections of original camera negatives from the Golden Age of Hollywood to ever reach the auction block. 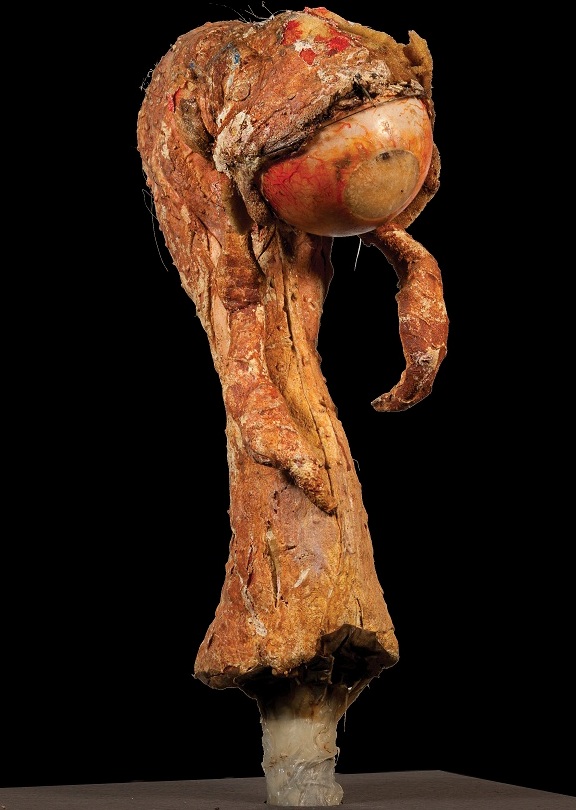 “The scope of this sale is unprecedented. We literally have something for everyone. Be it The Wizard of Oz, Universal horror, Star Wars, The Terminator or Tim Burton. This is the finest offering of Hollywood memorabilia we’ve ever assembled for collectors…and just in time for the holidays!” —Joe Maddalena

Other auction highlights include: 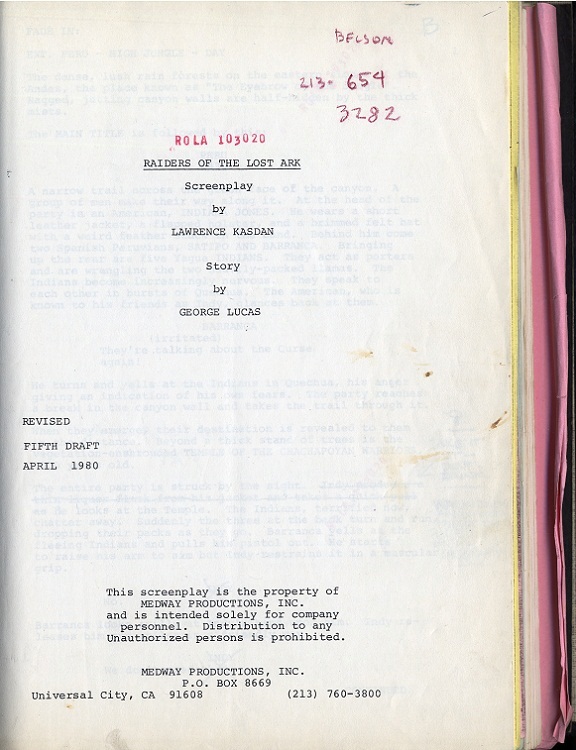 The Wizard of Oz vintage cloth-bound book signed to Jack Haley’s son by virtually the entire cast and crew, including Judy Garland and Toto! ($40,000-$60,000) 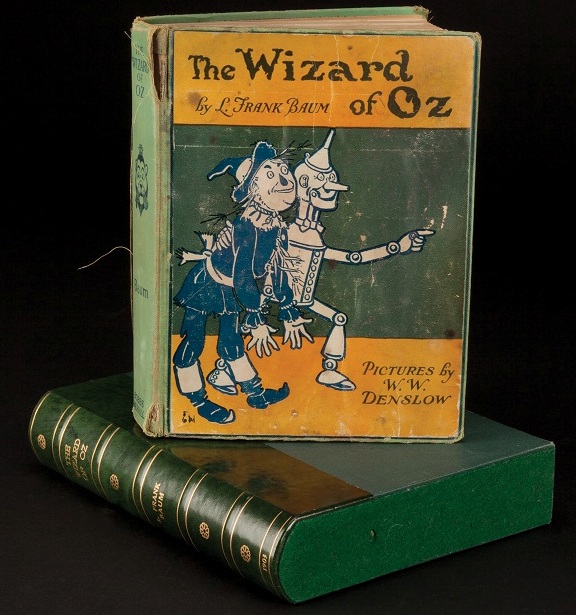 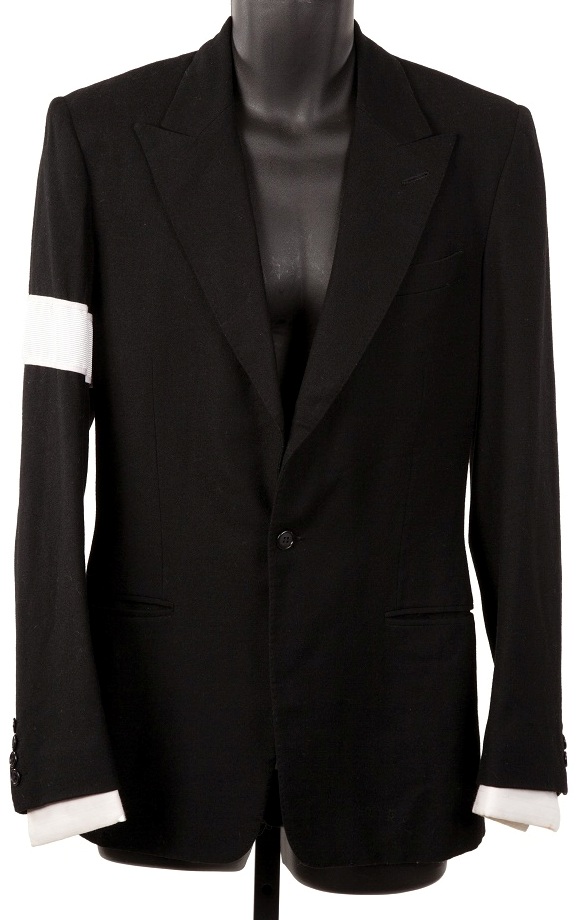 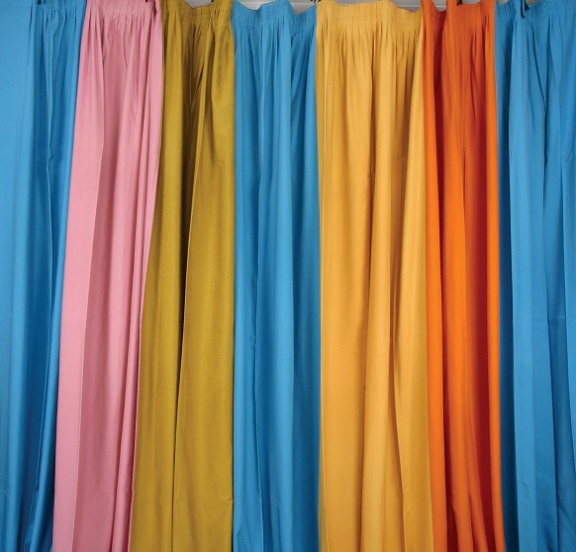 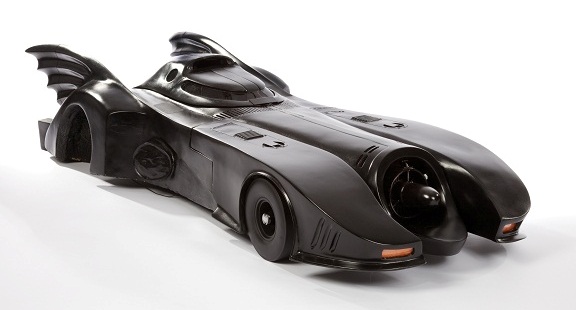 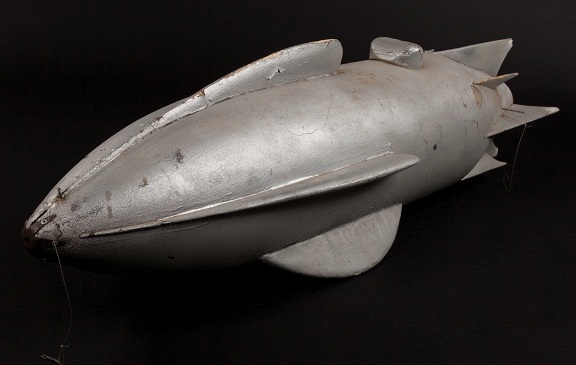 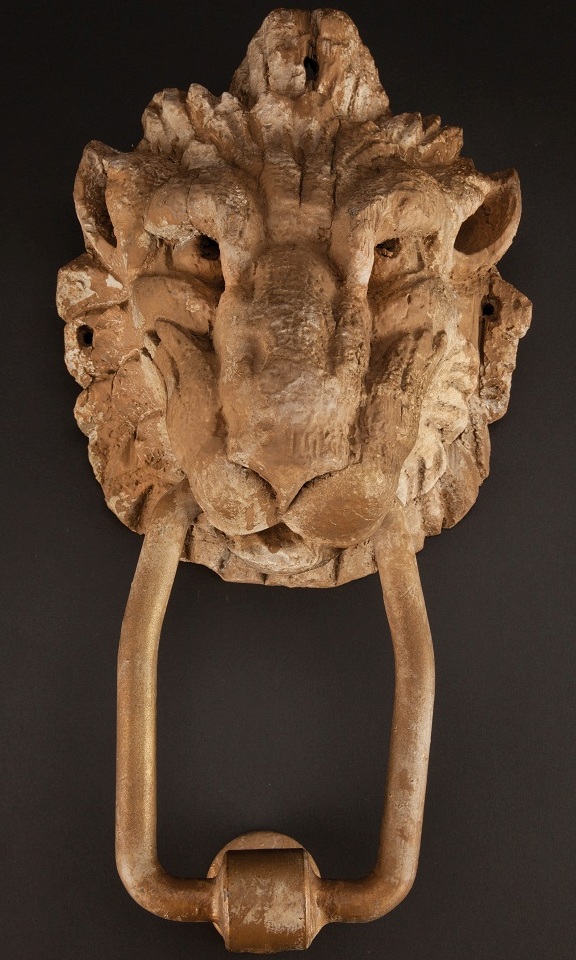 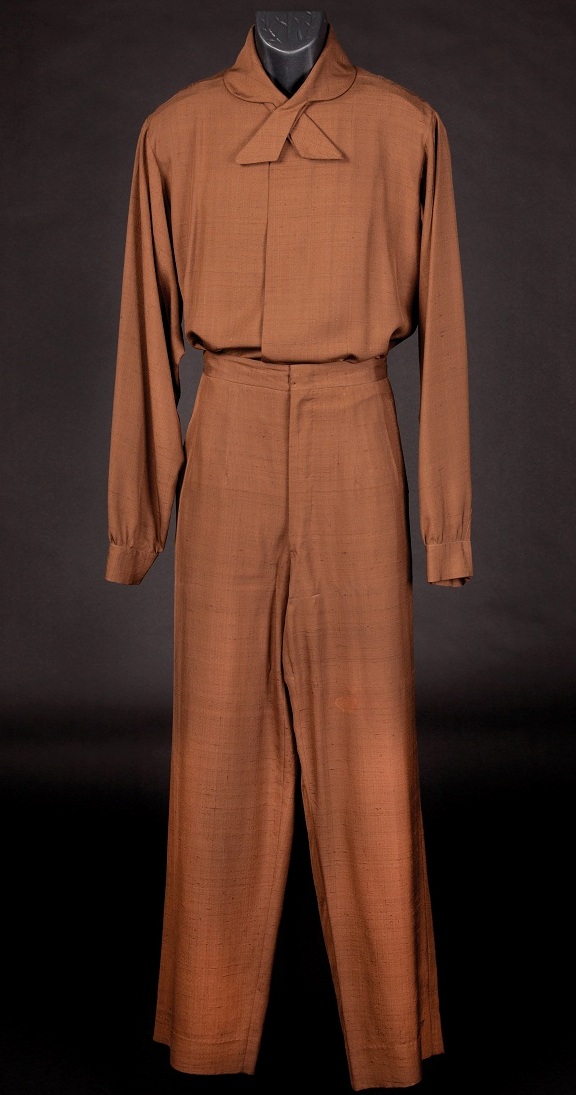 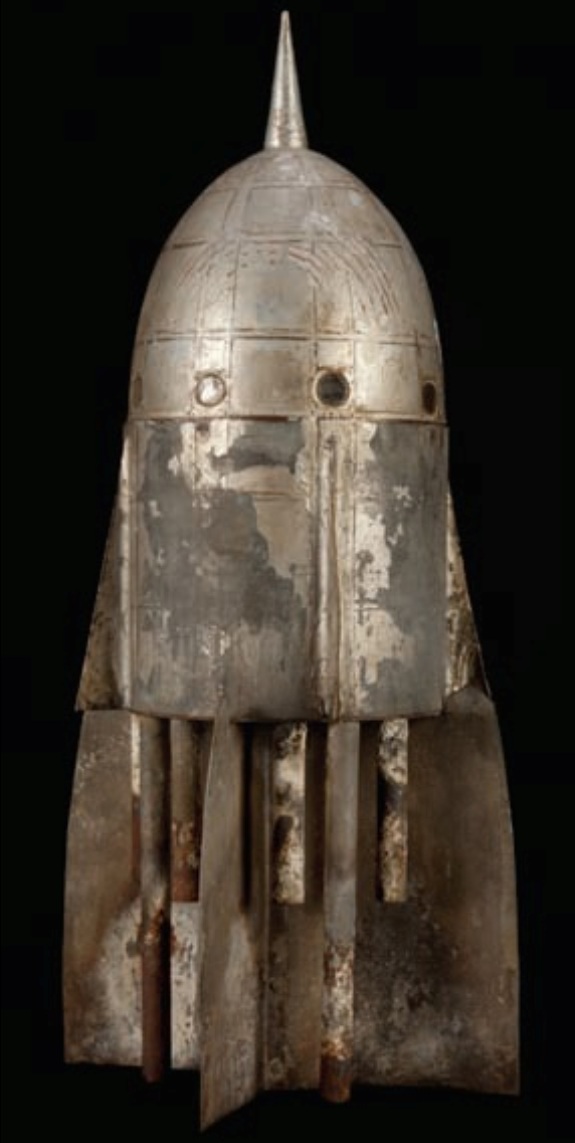 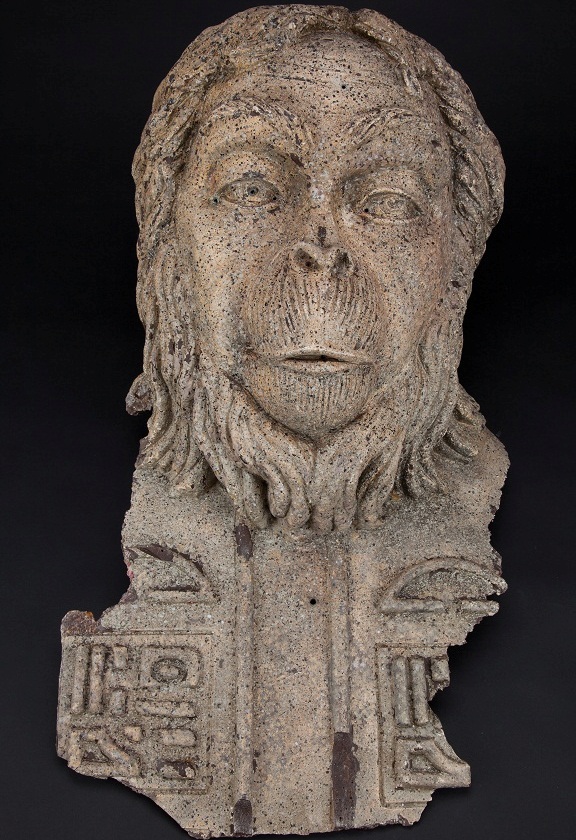 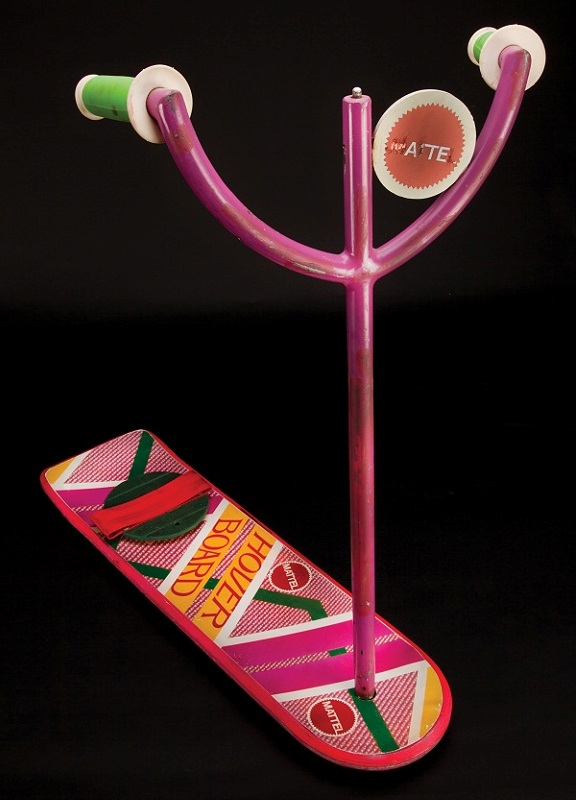 Arnold Schwarzenegger “The Terminator” leather jacket and leather glove from The Terminator ($20,000-$30,000) 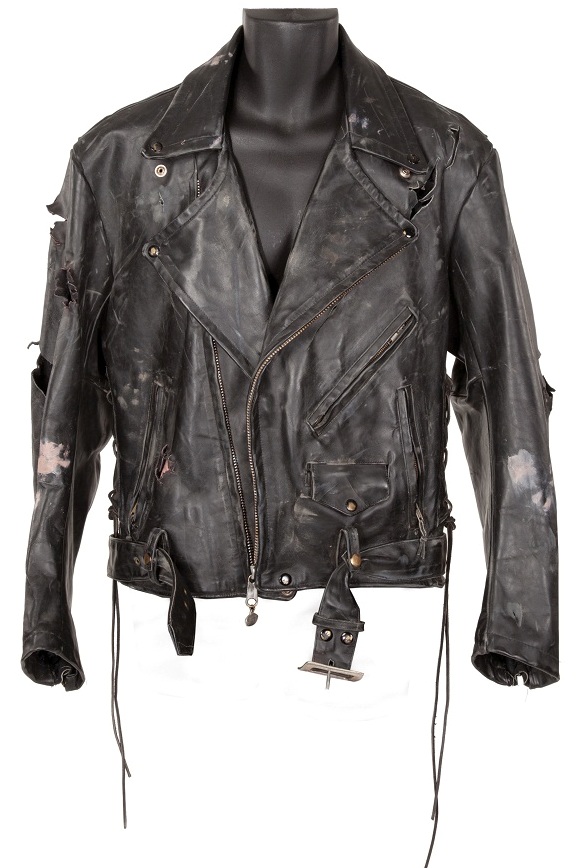 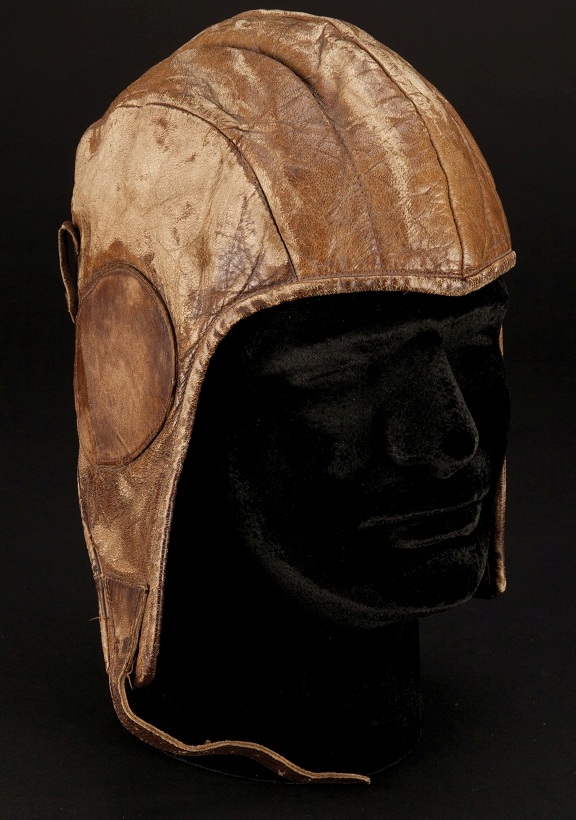 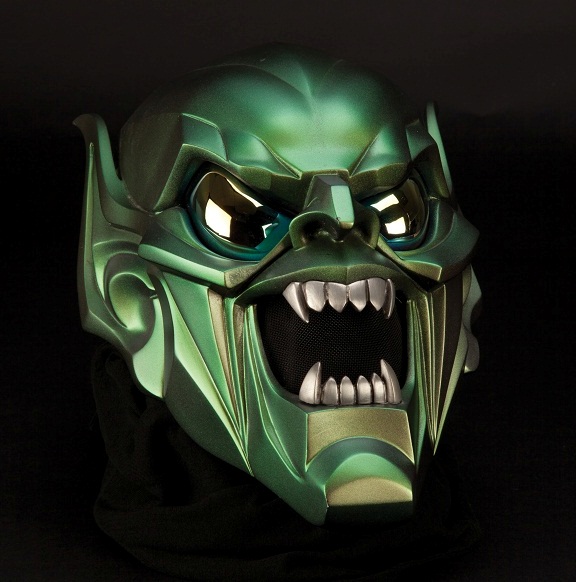 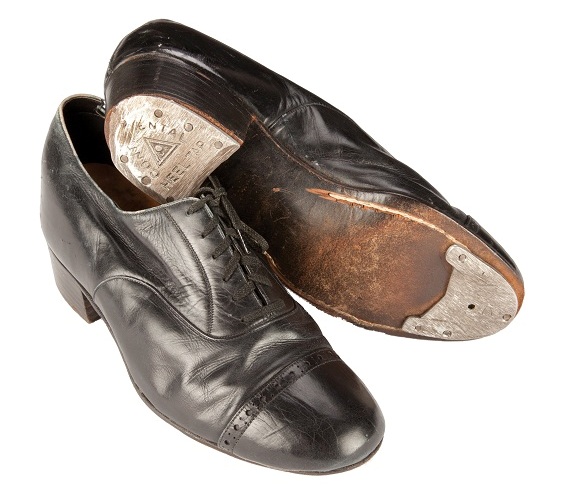 Founded in 1985 by Joseph Maddalena, Profiles in History is the nation’s leading dealer in guaranteed-authentic original historical autographs, letters, documents, vintage signed photographs and manuscripts.  Profiles in History has held some of the most prestigio

us and successful auctions of Hollywood memorabilia. Their auctions include costumes, props and set pieces from both vintage and contemporary film, television, and rock ‘n roll. Profiles in History’s location in Calabasas Hills, CA– virtually a stone’s throw away from every major Hollywood studio – ensures a constant flow of fantastic and rare collectibles. With an extensive network of dealers, collectors, and institutions, they are proud to play an important role in the preservation of motion picture history.