Welcome back to yet another awesome episode of this fantastic series, Stargate Universe.

Okay, when I was told that this was the best Varro (Mike Dopud) episode to date. I simply HAD to request that I write this review. Though I am not writing this review to score points (I do not feel I need to).

Now do not get me wrong, I love the entire cast of Stargate Universe, however I am a big fan of Mr. Mike Dopud! And well to be perfectly honest with Varro in leather in The Hunt– OMG!! Why on earth would I or anyone pass that up? 😛

Again, if you have not seen this episode, one question – WHY THE HELL NOT?? Or for that matter, ALL of them. But anyway. this episode focuses on a several interesting story lines. The Hunt does have focus on the Varro character and his future with the crew of the Destiny. However there is also Dr. Nicholas Rush (Robert Carlyle) who continues in being conniving – no big surprise there. The episode includes Sgt. Ronald Greer‘s (Jamil Walker Smith) new outlook on life. Then there are new and interesting creatures  to blow our minds!

And I apologize if I seem to have more Varro pictures in this report then anyone else. It just cannot be helped. After all, this is more of a Varro-centric episode. Though I will have others in here too. And I might jump around a bit, so I hope you still enjoy the read. 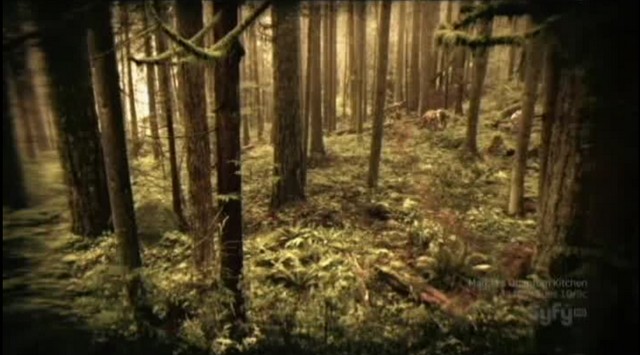 I must say the location where they filmed The Hunt episode is awesome. I have never had the pleasure of venturing over that far west in Canada, but when I eventually do, the locations where Stargate Universe is filmed is definitely one place I will want to go and visit.

Besides the gorgeous scenery, you cannot help but be in awe when you see the new alien animals created by Mark Savela and his visual effects team . One of which Lt. Scott (Brian J. Smith) and Sgt. Greer decided to try and hunt down to take back to the Destiny for food. Hey, nine plus months on the ship with no fresh meat? The crew certainly needed some steaks! 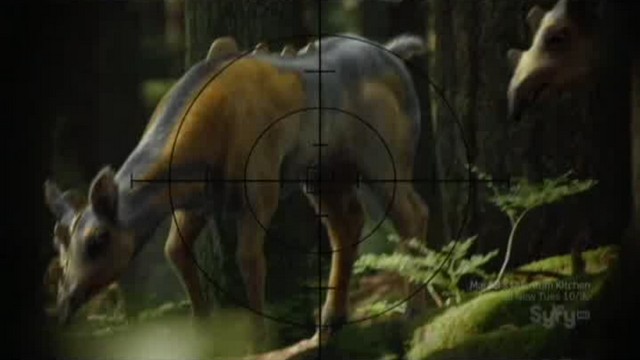 Of course, The Hunt does not go without dislike from Dr. Lisa Park (Jennifer Spence), she is a vegetarian. Dr. Park voiced her opinion on the matter in no uncertain terms. A good doctor, she did so not for the fact that she does not eat meat, but that they were on an alien planet and she did not know if the dear-like creature was going to be safe to eat at all. 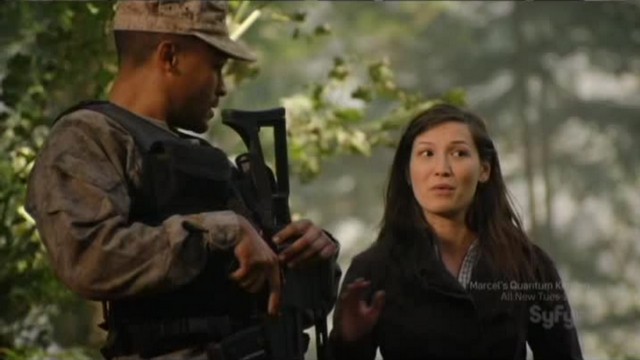 In the end, Lisa leaves with a “not cool” and heads back to the camp they have set up. 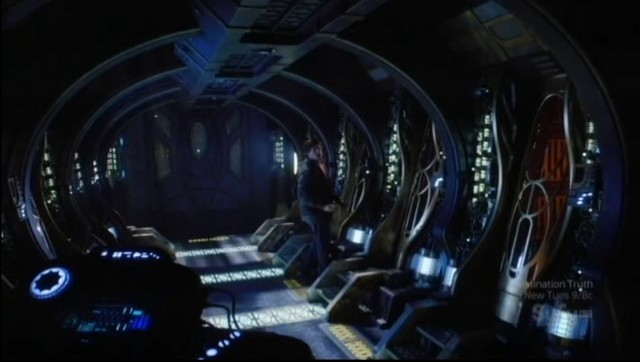 And the fact good ole’ Dr. Rush lured Eli (David Blue) and Adam Brody (Peter Kelamis) to an unopened and unexplored section of the ship, Rush knew that their curiosity was going to get the best of Eli. Especially when they opened the door to a room full of stasis pods. Everyone knows that Eli wasn’t going to just open, look around and then leave. Which was what Rush told them to do.

Leaving the stasis pods reluctantly, Eli started getting fed up that Rush seems to always call the shots as to what is important to check out and what to leave. So going against Rush’s “orders”, he turned around and went back, with Brody running to catch up with him.

Of course with Rush back in the main bridge, he could see that Eli could not help but to go back to the room. I was thinking that there was no way in hell that someone was going to actually get in a pod voluntarily, so by being the sneaky little snake, Rush had Eli and Brody fall for his trap. 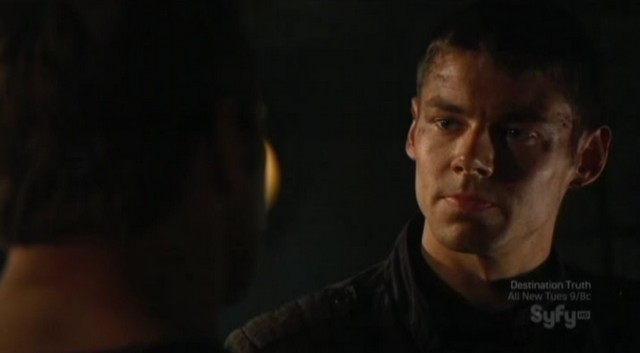 Then we have Varro stepping up and asking Lt. Scott to let him and his team go to the planet and help in the search. Scott I find is a character that cares for his teammates that much that he would do anything to keep them safe. Or for that matter, if he could, he would take their place. 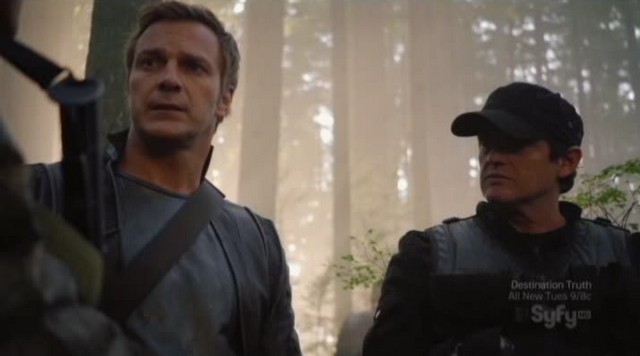 Of course the best moment is when Varro and his team met up with Young and his and start on the tracking of where this new and dangerous creature has taken TJ and the other officer. 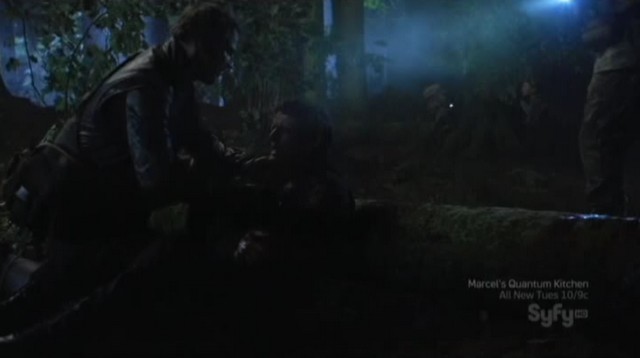 But what I found to be really touching was when Col. Young (Louis Ferreira) got injured and Varro went to his side and convinced him that he is a liability to the mission. Young knows that Varro will do whatever it takes to get TJ back. So stepping aside (sort to speak), Young issued Varro a gun so Young could go back to the Destiny.

Varro and Greer have their moments as well. Varro heard what happened to Greer not able to take the shot at the deer-like animal. So to Varro he needed to find a way to kick Greer in the arse and get back to his usual loving self. LOL

Of course with Greer having had a near death experience, he did not feel like his usual, shoot now – ask questions later. Instead he felt himself questioning everything he has ever done. Suddenly he was afraid, but he knew that could get him in trouble or the very least a liability to everyone on the ship. 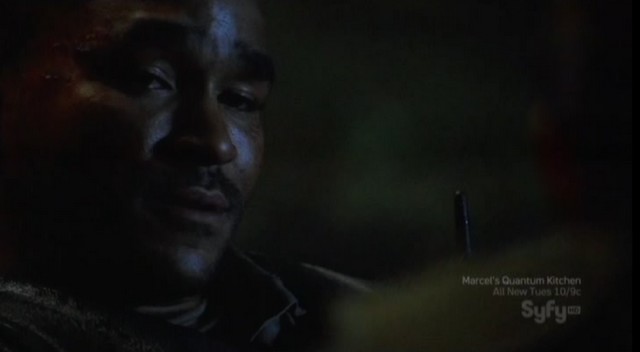 The pivotal point to his enlightenment was when he was having a chat with Lt James (Julia Benson). She did not understand how someone like Greer could go from wanting to kill everything or anyone who got in his way, to a guy who started thinking of what his actions could cause.

I think Greer has grown a lot this past few episodes. Learning to live with a group of terrorists who wanted to take the Destiny from them is one thing, but then turning around and putting in a good word for Varro. Which leads to Varro’s freedom aboard the ship.

Although, like Varro tells TJ, he doubts very much that if he had to confront Greer about it, he would deny it. So it does show that Greer is lightening up and getting a bit more trustworthy. Least I hope so. 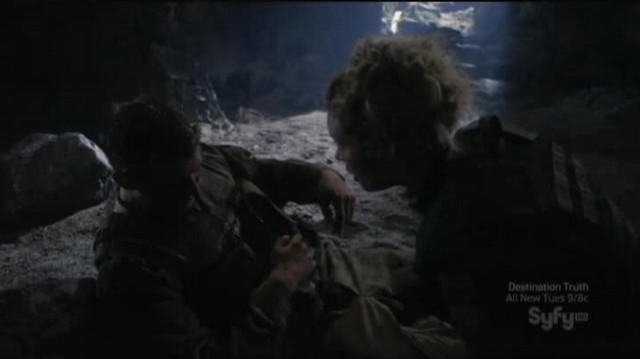 Then we have Tamara Johansen (Alaina Huffman) in the cave trying to calm down the young officer with her. He was freaking out that he did not want to be some creature’s dinner. She had to step up and whip him back into fact – no one gets left behind. Same sentiment as SG-1 and Atlantis. That I found was awesome to see them carry some aspects from each of the previous series, into this one. Very nice way to tie them all together.

I found this next sequence of pictures so awesome. Finally we get to see the connection that have obviously has gotten stronger between Varro and TJ. When she came to visit him in his room to inform him that he was a free man, he smiled and said “I know”. 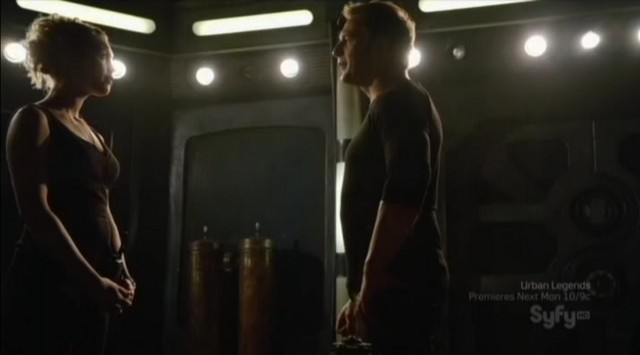 As I watched this I said, “Well it’s about bloody time!” Then with him looking at her. 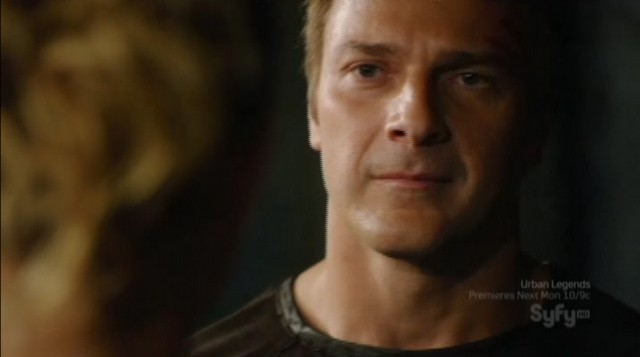 And she looking at him. 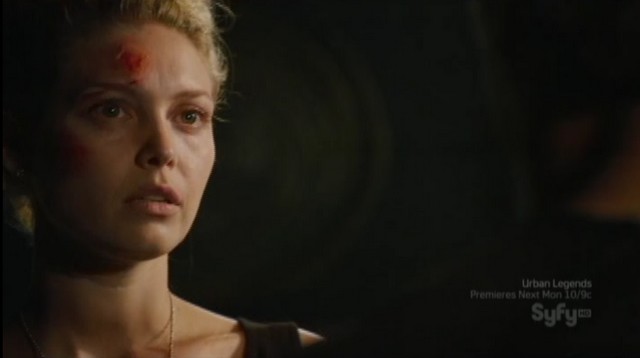 Then he walks in closer and reaching out for her to draw her near. 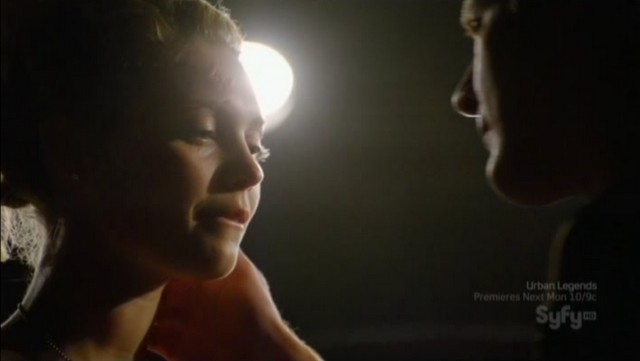 With their lips just about to touch, do we finally get contact? 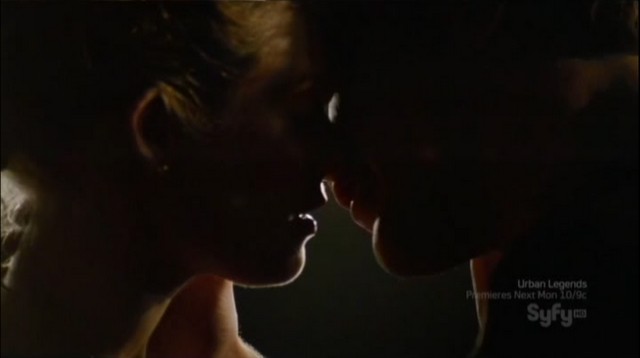 OF COURSE NOT!!!! Young had to beep at the door and F*** it all up. I never wanted to go through the TV so badly then at that moment. 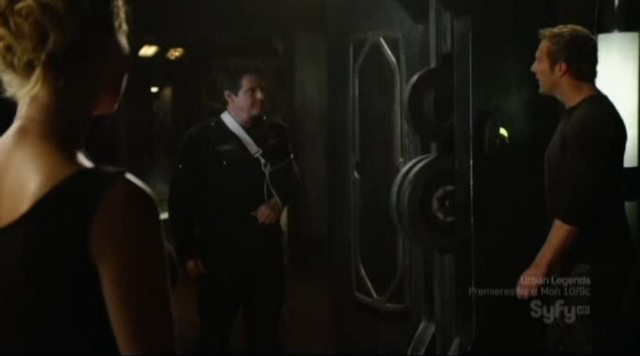 But the look on Young’s face as Varro left to join the rest of them for their version of a BBQ, he then realized what was about to happen AND what he lost. 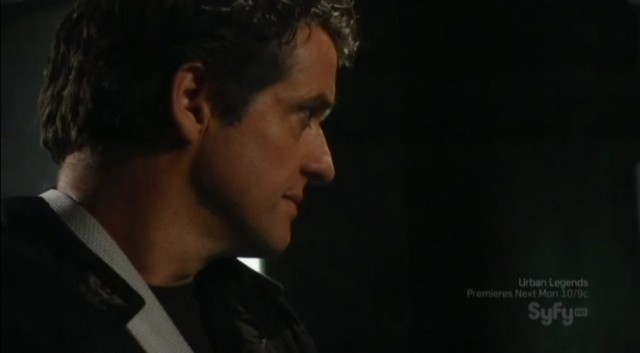 I am sorry, but I do not feel bad for Young at all. If he had been there for TJ when she lost their baby, maybe that would have bonded them closer. But I think, as does TJ, that Varro would have been the better choice in the end anyway. And who would pass Varro up? A man in leather!! Can you say HOT!! 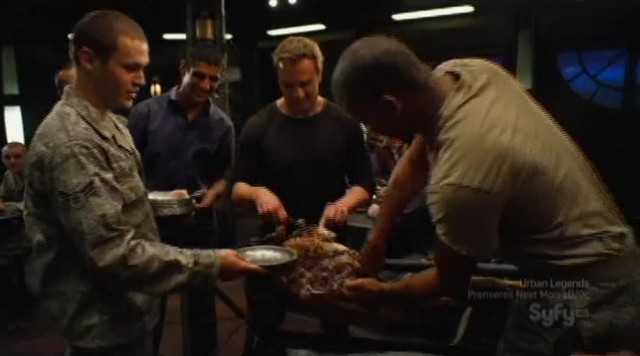 The best way to end this episode was to have Varro carve the meet in the end sequence. That I found was an awesome gesture to have him included into the rest of the crew.

However, what I did not know was that Varro is left on his own now. Something that Mr. Dopud had pointed out in the interview you are about to listen too at the end of this report. The rest of Varro’s Lucien Alliance members are all gone from one thing or another. But I guess we can take comfort that he’s got TJ there for company. Something in fact I believe has brought them together, they both lost loved ones. TJ her unborn baby, and Varro his wife.

Besides the fact that this episode was full of Varro — and in LEATHER!!! But it had a lot of interaction between Rush with Eli and Brody, Young and Varro, even Varro and Greer moments. And especially Varro and TJ. Whatever it is with this episode that makes you love it, it’s definitely well worth watching. This has been an awesome journey, one that I hope will come back in the future. 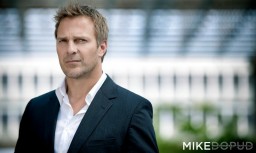 Until we meet again below is a treat I have for you. An interview I had with Mike Dopud the aid of WR_Systems (Kenn) from WormholeRiders with an amazing actor from SGU. I hope you all enjoy this little — well, far from little, it’s an hour long — interview. This interview gave me butterflies ten minutes before it actually happened. And with this being my first time interviewing someone, I was worried that I was going to trip over my words. But this awesome actor made it easy to relax and to get the job done.

I have been thinking up questions for this for a while, even googling him for hints or ideas as to what to ask. I must say, coming up with the questions was somewhat the easy part. But when it came time to actually ask them is when I got nervous.

We chatted about his previous role in this episode that you just finish reading about. As well as his other projects he has had the opportunity to do, one of which was Exit Strategy. Though, in saying that, I may have given away who this actor was that I had the honor of having a chat with.

However, once everything was said and done, and we had signed off, that is when I remembered one other question that I forgot to ask. I am sure that I will get to ask it on twitter.

So without further adieu, I give you, Mr. Mike Dopud.

Thanks for stopping by WormholeRiders News Agency this review of Stargate Universe and our interview with Mike Dopud.