The season two finale, But First, We Save the Galaxy, was another outstanding accomplishment by Joseph Mallozzi and his terrific Dark Matter team!

The exciting episode featured an epic cliff hanger leaving viewers wondering what may have happened to the Raza crew and many of the guest stars who were feature in the season two finale!

As the crew ramps up for the EOS-7 summit with the Council of Corporations, it seems none of the leaders actually trust each other. And after the first few minutes we can clearly see that Ferrous has devious plans for all aboard the station!

But First We Save the Galaxy: 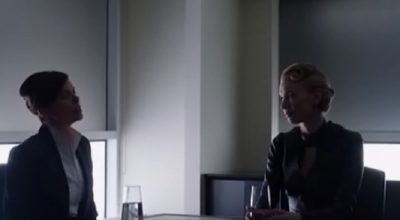 We open the superb season two finale of Dark Matter with Commander Truffault (Torri Higginson) having a meeting with her aide (Christine Horne). It has been wonderful to see Ms. Higginson featured in many exciting episodes during the second season of Dark Matter!

The two lovely ladies are observed discussing the implications of the upcoming diplomatic summit, something which has not happened in over 10 years.

Suddenly the Raza shows up with Two (Melissa O’Neil) and Three (Anthony Lemke) attempting to pull Commander Truffault to their side sharing that terrorists plan to blow up the space station! 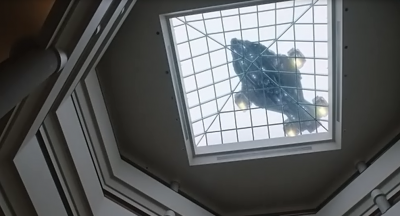 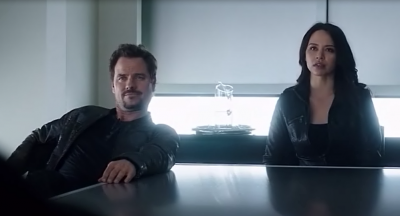 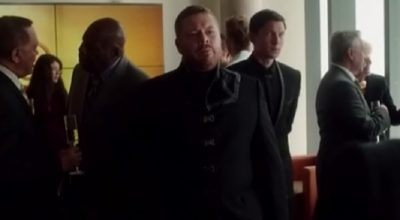 Showing their cards and what Nieman (David Richmond-Peck) is planning.

Two and Three convince Commander Truffault to include the crew by showing them a way through, using the Blink drive, onto the station during the summit.

It is agreed that Five will accompany Commander Truffault as her assistant for the summit.

Our gorgeous Five arrives as a beautiful blond at the summit! 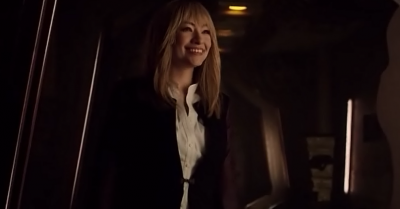 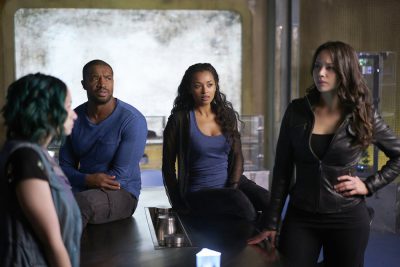 Six (Roger Cross), protector of Five expressed concerns that he is very worried that in this Dark Matter reality, Five will likely get stuck on the station if it blows up!

Ever confident Five, of course, says that she will be fine, but the crew has their doubts about the dangerous mission that confronts them.

Sidebar: I have a theory about this entire episode, imagine that! Anyway, more about that later! 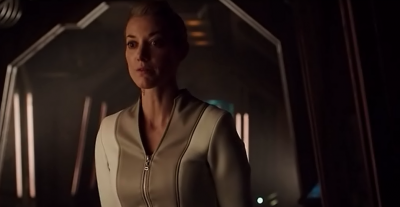 Android (Zoie Palmer) is also worried and feels guilty that she should be the one putting herself on the line instead of Five (Jodelle Ferland). When we see Five, she looks marvelous! Blonde goes good with office attire on her!

Every member of the Raza crew has spoken of the ‘Alternate Reality’ and at this point which reality is now and which one is then….and where does that leave the crew? 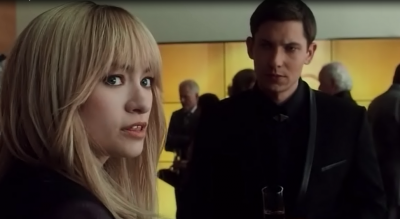 Five is safely aboard, she hangs with Truffault for awhile then slinks off, she has a job to do! She gets into the restricted area does her computer nerd thing and she gets the Raza visual to the ships cameras!

Through the cameras, Two, Three, Six and the Android see that Four, Ryo Ishida, is also aboard and now they worry he will see Five and blow her cover!

Five runs into a little trouble with security they find her communication device, but Arrian (Kyle Mac) shows up and saves the day! He does get cut, that’s when Five realizes that he is a Android! 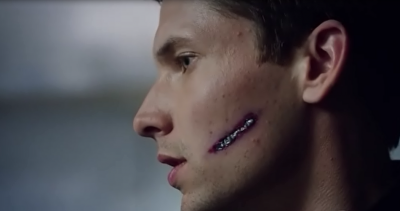 Too bad because it seems he was looking out for her and maybe a little more feelings are there, obviously he has had one of those upgrades!

Five advises him to lay low until his nanites repair the cut to his face. Arien came with Commander Niemen, Ferrous Corp, so it is just a little strange that he has latched onto helping Five.

Six, Three and Two, after changing into their fancy clothes, take the Marauder to the station and begin scanning for bombs. They split up – when has this EVER been a good idea….in any reality? 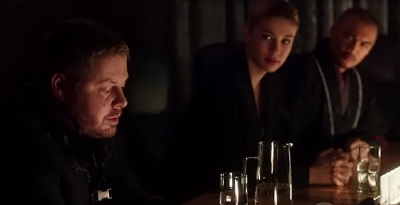 Nieman loses a major vote, is not a happy camper, a recess is called by the council to consider the developing situation.

Ryo and Two run into each other, he wants the Blink drive, says how it will help his people who he explains is already at war, Two says that would not be a good thing, giving any military force too much power. 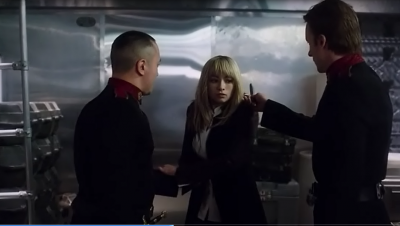 After Two refused to hand over the Blink drive to Ryo (Alex Mallari Jr.), he and Misaki (Ellen Wong), the girl with the scary Katana that secretly loves him, sneak over to the Raza and quickly locate Five.

Upon seeing the Android, he speaks a magical sequence of words and numbers and deactivates our lovely Android. OMYGOSH! He then goes right in and simply takes the Blink drive!

Misaki had her own reason for going with him, she goes straight for Nyx (Melanie Liburd) and they commence fighting! No-way can Misaki beat Nyx!

Cept’ Misaki doesn’t play fair, she did cut Nyx, just a sliver on her arm, but that was enough because her sword was covered with a poison! Misaki watches as Nyx falls to the floor just as Ryo is calling for them to leave!

Ryo has no idea what she has done….. 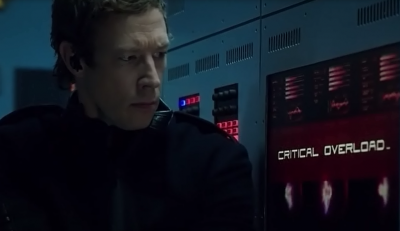 So Two, Three, Five and Six are all over the station, in different places! Three runs into Nieman and exposes his plot to blow up the station, which of course leads to them beating the crap out of him and just leaving him.

Six encounters Kierken (Kris Holden-Ried) and tries telling him about Nieman and how he is about to blow the station and that the entire Ferrous group has left the station!

Kierken locks him in a cell with a force field blocking his way out! 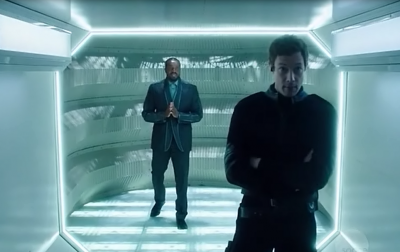 Five follows Arrian and he admits that HE is the bomb, Nieman placed it inside of him.

She tries to think of any alternative to save him but in the end he spaces himself to save the station. The blast is felt and heard throughout the station.

All are assured that no damage has been done to the station itself and for everyone to remain calm! Yeah, right! – the station is on lock-down with people running for their lives! 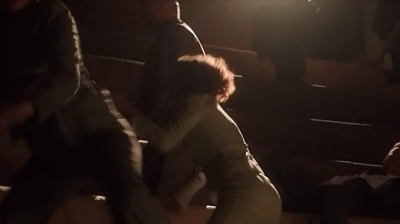 When safely off the Raza, Ryo reactivates Android through the comm system, she realizes what he has done! Ryo instructs Android to call all members of the Raza back to the ship – the station will totally explode in 20 minutes!

Two puts out a communication to all members, Kierken breaks into the transmission, she tries to tell him what is about to happen, he does find Ryo’s guy, inputting the overload command but —– its too late! Three, Five and Six are not hearing Two call to them! People are running everywhere! 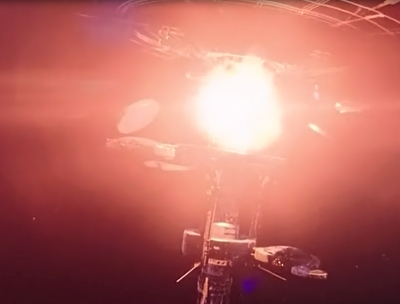 Truffault is able to  grab Five and says come with me as they flee for their lives!

The force field in the brig drops and Six takes off running….

Three is just now waking up from his beat down by Nieman’s guys….

who is that guy that runs up on him……

The EOS-7 station is a total loss, we see it, level by level, it explodes, it is gone! 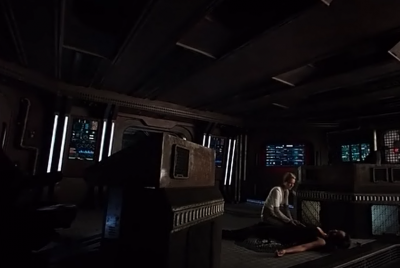 We are left with Nyx and Android aboard the Raza in the closing scene – maybe Android can save Nyx…..they could be the only survivors.

We hope not, maybe some of the crew escaped, it does not look good, I did not see any escape pods shooting out of the station, did you?

Okay. So, my take on this Season 2 finale:

The crew of the Raza, well, as hard as it may seem, they actually never jumped back into the REAL Reality, this IS the Alternate Reality. All of this happened in the Alternate Reality. The crew of the Raza, well the REAL version of them, they are safe, none of this actually happened, at least not the version of them that we know.

Hey, a girl can have an opinion……right?

Comments (3) on “Dark Matter: But First, We Save the Galaxy or Be Careful When You Blink!”