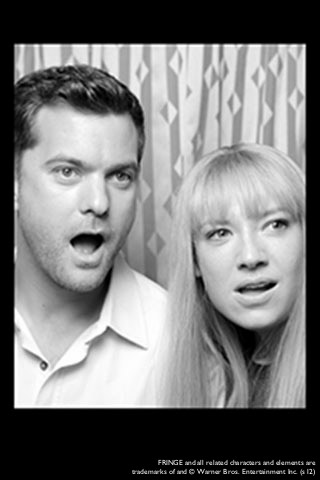 Welcome back to WHR Fringe You Decide! We are pleased and honored to include the complete two hour interview with creative writing genius’ Tara Bennett and Paul Terry of September’s Notebook conducted this past Sunday February 03, 2013 at 12 PM Pacific time on You Decide Radio! During our exclusive interview the gifted creators of September’s Notebook, that you can order by clicking here, we had the pleasure of discussing their busy careers which would make Peter (Joshua Jackson) and Bolivia (Anna Torv) drop their jaws in amazement. More importantly, with regard to September’s Notebook, we learned what motivated Tara …Read the Rest

Fringe The Final Episode: “Enemy of Fate”, Master of Destiny!

Well Fringe fans this is it, my very last Fringe review, ever. Sad, I know, it has been an incredible journey these last five years. We have seen characters come and go and return again. We have seen shapeshifters, parallel universes, things that no human being should ever bear witness …Read the Rest

Fringe: “Liberty”… The Fight for the Universe!

Fringe Fans…it has been an amazing journey, these five years of our beloved show. I have a confession to make; I have tried to prolong these reviews as long as possible so I can keep the show alive. In my heart I never want it to end, but alas as …Read the Rest

Fringe: “The Boy Must Live” To Eliminate The Observers From History!

Welcome back Fringe fans for our final series of reviews in this timeline, How does one write about the apparent end of Fringe during ones final analysis for such an epic science fiction drama series that has brought excellence to our screens for five years? Was it The End of …Read the Rest

Hello Fringe fans! I hope that you are surviving the hiatus. With the New Year just around the corner, so are the last three episodes of Fringe. It is bittersweet to know that so few remain, but also great because we will see the final battle unfold as it should …Read the Rest

Fringe: Black Blotter Does More Than Free Your Mind, Walter Gets to Ride Gene the Cow!

Welcome back Fringies! As we approach the end of one of the most epic science fiction dramatic television series produced within the past quarter century, we take pause to remember those whose contributions have made the Fringe series one of the most beloved in all of televised entertainment history! ﻿ …Read the Rest

Fringe: The Human Kind Is An Emotional Wreckage, But There Is Hope!

Hello Fringedom! We have returned from the hiatus to a fantastic Fringe episode with lots of confrontation, between POlivia, most importantly. The episode deals with the things that make us what we are, like faith. Either having faith in an unseen God or in us and our own potential, it …Read the Rest

Fringe: Five Twenty Ten Means 5x20x10 is The Combination That Will Save the World!

Hello Fringe fans. Heck of an episode, huh? Well, let me say that I am still conflicted about what Peter is doing. On one hand I can completely understand, but on the other, he is doing himself and the team a grave disservice. There are all kinds of clichés that …Read the Rest

Fringe: Through the Looking Glass and What Walter Found There? A Pocket Universe!

Hello Fringe fans. Heck of an episode, huh? Well, let me say that I am still conflicted about what Peter is doing. On one hand I can completely understand, but on the other, he is doing himself and the team a grave disservice. There are all kinds of clichés that …Read the Rest

Fringe: “An Origin Story” Means Emotions May Be The Biggest Problem At War!

Hello Fringe fans! What an episode we had last week, huh? The most heartbreaking point of the story told here so far, the death of Etta Bishop (Georgina Haig) and how the Bishop family dealt with it. This tragic circumstance has motivated the Fringe Team to fight even harder to …Read the Rest

Fringe Turning Point: The Bullet That Saved The World…and Shattered My Heart at the Same Time!

Well Fringe fans, this past episode rendered me shocked and speechless. My tissue box is minus a dozen or so tissues and my heart is broken. For everyone that has seen this episode you clearly know the reasons why. Fringe has pulled out all the stops and then some, as …Read the Rest

Fringe: For The Record “The Recordist” Means a Crystalline Edifice Designed to Save The World!

Welcome back to the year 2036 Fringe fans, The situation is more than desperate! Good guy Observer September (Michael Cerveris), Broyles (Lance Reddick) and Nina (Blair Brown) are nowhere to be found. The Observers are running wild literally looting our fair planet, poisoning the Earth’s air, all the while executing …Read the Rest

Fringe: “In Absentia” Of Anger, Hope Shall Prevail Another Way!

Hello Fringe fans, This week we return with another great very emotional episode in which we had the chance to see the mother/daughter relationship between Olivia Dunham (Anna Torv) and Etta Bishop (Georgina Haig) grow. It is logical to think that Etta would grow hardened by what happened to her …Read the Rest

Hello Fringe fans, It truly has been a long summer. One that I will never forget, first I was able to get my Fringe fix on by going to Comic-Con 2012 and now by partaking in the brilliant first episode of the fifth and alas final season of one of …Read the Rest

Hello my fellow Comic-Con fans and most importantly my beloved Fringe fans! This is the post I am sure you have all been waiting for. As this was my first Comic-Con experience, it was also my first (and last) Fringe panel. To say that it is bittersweet is an understatement, …Read the Rest