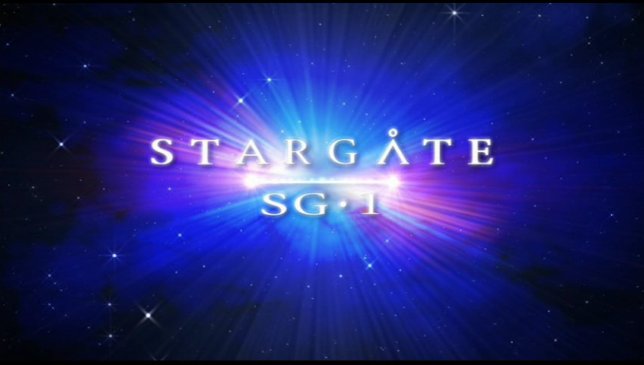 Hello once again Stargate Fans! After an 11 hour drive across the Rocky Mountains from Alberta to Vancouver, my car companion and I reached Vancouver and, more importantly, arrived at the very last Creation Entertainment Stargate Convention that was conducted at the Hilton Vancouver Metro Town Hotel. Since this convention event was billed by Creation…

END_OF_DOCUMENT_TOKEN_TO_BE_REPLACED

Welcome back Stargate Universe fans!!! Wow, this has been a while since I have written a review for Stargate Universe. Did you miss me? I know that last review I wrote was way back when with the season one tenth episode “Space”. That was a great experience for me as I have never ever accomplished…

END_OF_DOCUMENT_TOKEN_TO_BE_REPLACED

Hello Stargate fans! It is an unfortunate fact some individuals out there have been cruel with their hate campaigns regarding Stargate Universe. However, we are putting that behind ourselves and only focusing on positive things. With the “Share the SGU Love” fan campaign, the purpose is to help the Metro-Goldwyn Mayer Studios, the production company…

END_OF_DOCUMENT_TOKEN_TO_BE_REPLACED

CALLING ALL SANCTUARIAN GATERS! Gate to the Sanctuary was an incredible Stargate and Sanctuary convention, held in Sydney by Culture Shock Events, and in Melbourne by Hub Productions. On the weekend of 11-12 December, 2010, several hundred extremely blessed fans had the opportunity to meet with some of their favourite artists, including Amanda Tapping of…

END_OF_DOCUMENT_TOKEN_TO_BE_REPLACED

CALLING ALL SANCTUARIAN GATERS! Gate to the Sanctuary was an incredible Stargate and Sanctuary convention, held in Sydney by Culture Shock Events, and in Melbourne by Hub Productions. On the weekend of 11-12 December, 2010, several hundred extremely blessed fans had the opportunity to meet with some of their favourite artists, including Amanda Tapping of…

END_OF_DOCUMENT_TOKEN_TO_BE_REPLACED

Hello Stargate Community and Stargate Universe fans, I would say good morning, but it really is not a good morning is it? We did have other news to post yesterday at 12 PM Pacific time, but frankly I did not have the heart to complete a story that was ready for publication. I realized that…

END_OF_DOCUMENT_TOKEN_TO_BE_REPLACED

Even as I sit writing this, I wipe away the tears on my cheeks from the joyous comradeship of the weekend, and the pain of parting with old and with new friends. Even now, the newest of friends have made the familiar stamp on my heart, and the torn feelings of unashamed uproarious snorting, inappropriate…

END_OF_DOCUMENT_TOKEN_TO_BE_REPLACED

Hello science fiction fans! Gifts… Who has not had a problem with finding an appropriate present for a friend or themselves (yes it is good to spoil oneself with a gift once in a while) in their life? However, from now this problem for science-fiction and fantasy fans has been solved. A few weeks ago…

END_OF_DOCUMENT_TOKEN_TO_BE_REPLACED

Fellow fans, As some of you will remember, I recently interviewed Josh Blacker of, most recently, Stargate: Universe, Human Target, and V. In the course of the interview Josh and I talked about everything from how he first got into acting – a rather circuitous and interesting journey – to his thoughts on Sgt. Spencer…

END_OF_DOCUMENT_TOKEN_TO_BE_REPLACED

Hey Stargate Universe Fans! SGU S1x14 ‘Human’ is simply another outstanding episode in an epic saga of our age. With the tale in ‘Human’ all should by now definitely see the direction that Stargate Universe has been on all along in the “Road Taken”. All along it  has been quite clear, and all Stargate fans…

END_OF_DOCUMENT_TOKEN_TO_BE_REPLACED

My Fellow Fans, This past weekend I attended the annual Stargate convention – colloquially referred to as “VanCon”  – held in Burnaby, British Columbia by Creation Entertainment. This was the first convention I have attended, and it was quite the eye opener for me. It was different than I had been expecting – less hectic,…

END_OF_DOCUMENT_TOKEN_TO_BE_REPLACED

Hey Stargate and Creation Entertainment fans! My first day at VanCon Stargate 2010 morning began with preregistration at the Hilton Metrotown Vancouver located in Burnaby, British Columbia. It is a beautiful facility that Creation Entertainment selected for the convention .  I received my convention pass and Press Credentials for WormholeRiders News Agency (WHR) from the…

END_OF_DOCUMENT_TOKEN_TO_BE_REPLACED 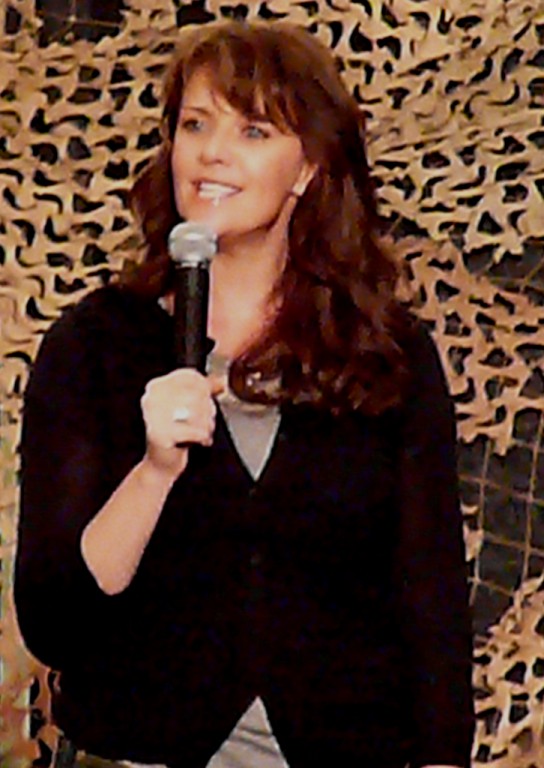 Well here it is, at long last! Amanda Tapping from the Creation Entertainment Chicago Stargate 2009 Convention! I’ve got to say that never have I been so happy to know short hand! It helped a great deal in getting all of the details. It’s not 100% accurate but it’s as close as I could get it!

Amanda is…well, Amanda is AMANDA! She’s sweet and funny, smart and so genuinely appreciative of her fans. She loves the fans just as much as the fans love her and it shows!

Amanda’s panel began with a music video for Samantha Carter to I Can Hear the Bells from the musical Hairspray. Amanda began by going over what was going on in her life currently. Sanctuary had just finished filming Season 2 and she was settling back into her daily routine with her husband Alan and her daughter Olivia. Amanda wasted no time and threw it open to questions!

Did you have an interest in astrophysics before SG-1?

“I was interested in astronomy before but never really astrophysics until I played Sam Carter. The more research I did the more interested I was in the subject. I get asked science questions and…it’s a show. I could not save the world from a black hole right now. I don’t know if you’ve heard this story before but someone came up to me at a convention and said “so, what’s a naked singularity?” I didn’t answer the way I wanted which was “Sam Carter on a Saturday night.” (crowd SCREAMS, Amanda looks cheeky). (In an English accent) Not quite scientific but funny!

“I met a real astrophysicist who was very challenging and was like ‘you know what you did in that one episode…’ I don’t know what you’re talking about…but he was very smart and he taught me a lot.” 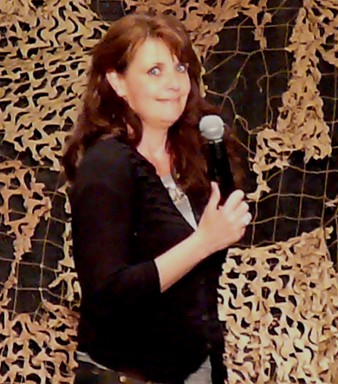 “Carol Burnett and a British comedian named Dawn French…and Jennifer Saunders. I could go on. Carol Burnett was really the first person I saw on television that I just went ‘Oh my God she’s amazing!’ I just got tickets to see her do a live show in Vancouver. Those of you who don’t know who she is (scoffs). She’s only one of your country’s greatest assets! That would be my squee fangirl moment. I think if I met Meryl Streep I’d just pass out. I don’t think I’d actually get a full squee out because I’d run out of breath.

“What actually inspires me? This is going to sound really disingenuous and I don’t mean it to, but you guys. Seriously. I know it sounds hookie as hell. When I made the leap from Stargate to Sanctuary and I made this leap not knowing that Sanctuary was picked up as a television series…it was the fan support that helped make it easier for me. And when I started Sanctuary and it went on television and fans were writing me and telling me that they supported me…Holy moly! It’s what Martin (Wood), Damian (Kindler) and I talk about that if it weren’t for the fans…you’re the reason we’re here. You keep us going. Someone asked me in the photo line if I was tired and no, because I’m getting all this great energy from you guys. You should be exhausted!!!”

A fan came up and asked Amanda if she got the shawl and baby bib that she had made and sent her. Amanda knew right away what she was talking about and thanked her profusely! What method do you use when acting?

“I don’t know that I have a method. I studied Uta Hagen, read her book ‘Respect for Acting.’ I did a lot of character study work in University and voice work which I think is really important. Once you do a television series stamina is key. I remember the end of the first season of Stargate, Michael, Christopher and I were all sick. We were just wiped out. By the end of Season 2 we were exhausted. By the end of Season 3 we had a few more weeks left in us. It took a while to build up that stamina. I’m watching these young punks on Sanctuary who are like ‘Ugh Episode 10 I’m so exhausted!’ I’m like, ‘Yeah, get over it! Get back on set! (cracks whip)’ You see you get a whip when you become executive producer. I didn’t know that! It’s so awesome! 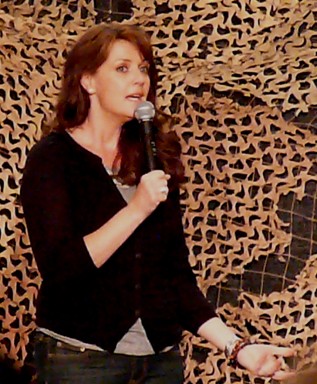 “My advice to you is to pursue it. I will never tell anyone, ‘don’t do it. It’s too hard.’ That’s what I was told. Do it. If it’s your passion go for it. Take all the classes you can take but go for it. The journey is way better than the result.”

“Rick and I…our kisses are like wine. We age well. Mitch and I was just this sort of raw passion…I hadn’t seen Mitch since we shot the X-Files and then he was on the set of Atlantis when I was shooting. I ran over to the stage on a quick break and he was sitting in his chair on the ship and he was like, ‘hey last time I saw you, you were naked!’ The whole crew did a double take.”

END_OF_DOCUMENT_TOKEN_TO_BE_REPLACED

Hi Stargate Universe fans! Once again many thanks to SyFy for their courtesy and for their high quality video embed. Stand by! We will be posting a a new report on one of the most delightful women associated with the Stargate franchise. Now without further delay, here are the women of Stargate! Thanks Syfy! Enjoy! Thank…

END_OF_DOCUMENT_TOKEN_TO_BE_REPLACED

A few hours after Michael Shanks appearance today, Amanda Tapping took the stage. She had little new to report since Vancouver, but had lots of wonderful stories. She did tell us that, from her time on the SGU set, the SGU cast is working hard to adjust to their new jobs. Amanda said that for…

END_OF_DOCUMENT_TOKEN_TO_BE_REPLACED

Hello Stargate Universe Fans, Here is Something Kinda Special for you Doctor Daniel Jackson (Michael Shanks) fans whom have admired his fine performances from Stargate SG-1 and Stargate Atlantis! But first a few questions must be considered: Have you ladies often wondered what kind of love affairs Doctor Jackson has experienced in the past after…

END_OF_DOCUMENT_TOKEN_TO_BE_REPLACED

Welcome to WormholeRiders News Agency NEW dedicated Stargate web site! You have written and asked for a Stargate only site from #TeamWHR and we have heard you! Here we will post news about all flavors of Stargate, past, present and future, including all of our exclusive interviews dating back to the early days of WHR,…