Dracula: Let There Be Light…Don’t Turn to the Darkness! 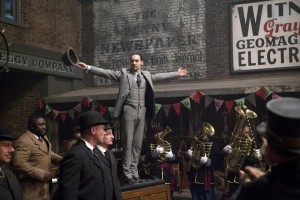 Hello my fellow vampire fans! That was some season finale, everything I expected and more. I loved every minute of it! I am hoping that the studios will decide to grant us a second season. I for one am very anxious to see what happens with everyone, especially Lucy (Katie McGrath) now that she is a vampire. It is such a well done show, from costumes to the story being parallel (to some degree) with the book. This show is what ALL vampire shows should strive for! When we last left everyone, Lucy became a vampire at the hands of Grayson (Jonathan Rhys Meyers), Mina (Jessica De Gouw) and Harker (Oliver Jackson-Cohen) are no longer a couple and Browning (Ben …Read the Rest

Hello my fearless vampire hunters! Are you ready for the final two episodes of this season? It has been a ride to remember and I have a feeling it will only get better. This is the episode where everything changes, where we finally get to see Dracula sire a minion. It is also one step closer to the ultimate reveal, will Lady Jayne survive or will she become another casualty? Only time will tell. The Season 1 finale is one for the books. Two fierce warriors going head to head. Only the strongest, most cunning will survive. Do you have …Read the Rest

Dracula: Come to Die…Let Us Help You!

Hello my fellow vampire fans, I hope you enjoyed this episode as much as I did? There was a lot going on in this exciting episode directed by the talented Brian Kelly! Things in Dracula are getting closer to the edge, Lady Jayne is getting closer to finding out who she really seeks. The stakes (sorry for the pun) are high and if they are not careful things can unravel quickly. The season finale looks amazing. I cannot wait for the final battle, it looks just epic. I have a feeling it will definitely be worth the wait. It almost …Read the Rest

Dracula: Servant to Two Masters and The Fruits of Vengance!

Welcome WormholeRiders who are dedicated to Dracula! It seems to be a natural part of being human to want revenge on those people we feel have wronged us. A thirst for vengeance is nothing if not timeless. It is as classic as Homer and Hamlet, and as contemporary as Don Corleone of The Godfather, and Quentin Tarantino; as old as the eyes and teeth traded in the Bible, and as fresh as the raid that took the life of Osama bin Laden. But while the idea of revenge is no doubt delectable — the very phrase “just desserts” promises a …Read the Rest

Dracula: Of Monsters and Men are One and The Same!

Hello my fellow vamp lovers! Here we are again facing the winter hiatus of our favorite show. This episode was the turning point in the show. It was the most crucial episode to date, the one we have been building up to. I know that new episodes won’t come back until January 2014, but in the meantime, let’s hope this review will hold you until then. I know that different myths of Dracula have him walking in daylight and other tales have him burning at the slightest ray touching his cold, dead flesh. Whatever myth you subscribe to, this episode …Read the Rest

Dracula: The Devil’s Waltz, or The Renfield Story!

Welcome WormholeRiders who are dedicated to Dracula! This was the best episode so far! Wonderfully written by show creator, Cole Haddon and Nicole Taylor, it had everything! Grayson’s preoccupation with walking in sunlight, his real feelings for Mina (Jessica De Gouw) and his rival, Jonathan, as well as a great back story for R.M. Renfield (Nonso Anozie)! The Devil’s Waltz episode was superbly directed by Nick Murphy, who also directed two episodes of Primeval. Murphy is a writer and producer as well. The Devil’s Waltz: Carrying on from the previous episode, Renfield (Nonso Anozie) finds himself a prisoner of Lord …Read the Rest

Dracula: From Darkness To Light Secrets Are Revealed!

Welcome back Dracula fans! I hope you had a nice two week hiatus from one of our favorite shows? This episode proved to be more and more intriguing as we find out more about Grayson, Lucy and what the Order and Lady Jayne has up their respective sleeves. The preview for this week’s episode looks like a huge turning point for a number of characters. I hope that Renfield can survive his current predicament and that Harker (Oliver Jackson-Cohen) does not lose his head. It will no doubt prove and test loyalties abound. The title of this episode was “From …Read the Rest

Welcome WormholeRiders who are dedicated to Dracula! Maybe I am being a bit thick, but the reason for the title of this particular episode escapes me. To me, this will forever be the episode, “In Which Dracula Shows He Still Has A Heart”, or, “The Romantic Episode”. What comes to mind with this current title is the little goblin bank tellers in the Harry Potter movie. So, very not the same thing. As is the habit of this particular series, the beginning of the episode gives us more insight into the character of Dracula, based on his experiences in his …Read the Rest

Welcome WormholeRiders who are dedicated to Dracula! Well my fellow vamps, here we go again! Another episode graced our televisions and this one was fantastic, too. I am glad that we were able to get a bit (sorry) more insight to Van Helsing’s plan when he woke Dracula from his deathly slumber. Next week’s episode will prove to be very essence of what Dracula is and how he was made. The origins and why’s of his making will become crystal clear. As powerful as Dracula is, he is still vulnerable and longs to be a mortal man. This week’s episode …Read the Rest

Dracula: The Blood Is the Life…and So Is Vengence!

Welcome WormholeRiders who are dedicated to Dracula! Hello my fellow Dracula fans! I hope you enjoyed the premiere as much as I did. It was a great start to what will become a great show. I am glad that NBC took a chance on this and kept it in the fashion and tradition that the book by Bram Stoker had intended. This week’s episode gets more juicy (pun intended) as more and more about what Grayson (Jonathan Rhys Meyers) has in store for the people of London. The preview included on the left side bar says it all. I must …Read the Rest

Welcome WormholeRiders dedicated to Dracula! We are pleased on Halloween to announce, by way of Lindsey Stirling’s great “Elements” music video, our coverage of the new NBC Dracula series at our new web site dedicated to the fantastic work therein which is faithful to the works of master storyteller Bram Stoker! This new WormholeRiders News Agency (WHR) web site has actually been ready since last week before the premiere, but after discussing the matter with Team WHR Senior Series Editor, and acclaimed San Francisco stage Director Lori Glumac, Lori suggested we make our launch announcement coincide with “All Hallows Day” or …Read the Rest